Even as the fallout from the deadly Unite The Right rally continues, the organizer of the event is putting Charlottesville, Virginia, in the crosshairs again.

Jason Kessler, a white nationalist from the college town, announced Wednesday on his website and Twitter that he’s started paperwork to hold another rally on the one-year anniversary of the initial Unite The Right gathering.

Kessler, who is behind a new white nationalist organization called "The New Byzantium Project," said the first-anniversary rally will be held August 11 and 12, 2018.

“We must have a presence in the streets of America,” Kessler wrote on his website. “Let’s not kid ourselves about which way things could blow if this country collapses in the near future.”

The initial racist “alt-right” rally, held in August, ended in bloodshed when 20-year-old James Fields, Jr., plowed a car into a group of protestors, killing 32-year-old Heather Heyer. Kessler mocked  Heyer's death on Twitter, calling her a "fat disgusting communist," before deleting the tweet which he blamed on drugs and alcohol.

Kessler’s announcement drew about a dozen retweets from other white nationalists, many of whom are focusing on college tours rather than a repeat of the violent events in Charlottesville. The events last August meant much more than just "bad optics" for the white nationalists; organizers, including Kessler, are also facing a lawsuit filed by a number of people injured in the ensuing melee.

“I think you said it all last time when y’all murdered a peaceful protester with a car. That pretty much summed up your entire position,” Twitter user Matt Rummel (@horrorfan1313) wrote.

While Virginia State Police study the rally and what ultimately went wrong that weekend. Kessler and others have made excuses for Fields and blamed police for the rally turning violent.

On his website, Kessler posted an image of the permit for the proposed 2018 rally. 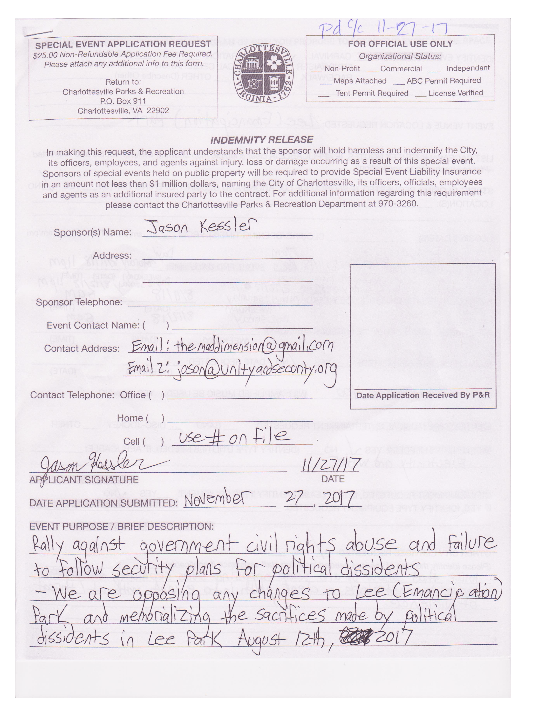 Jason Kessler has applied for a permit for a second Unite the Right in 2018. 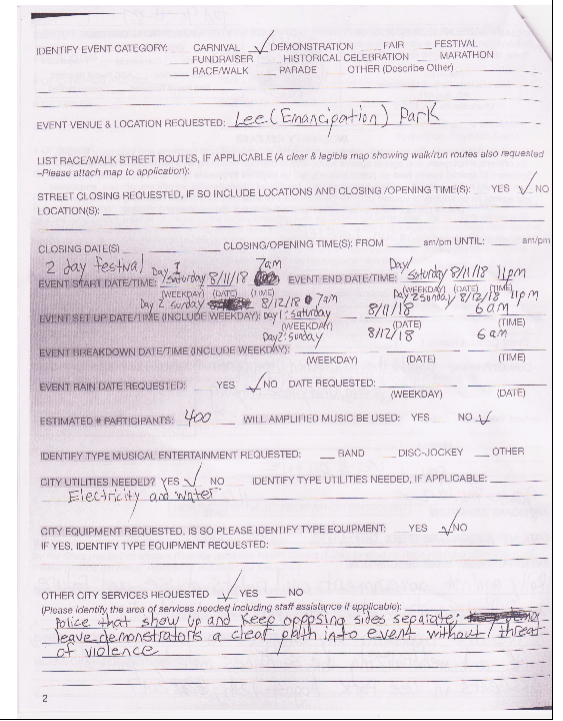 As for the event’s purpose, Kessler described it as a “rally against government civil rights abuse and failure to follow security plans for political dissidents” as well as “memorializing the sacrifices made by dissidents in Lee Park August 12, 2017.”

Kessler and others are being sued in federal court by the City of Charlottesville and people impacted by the rally.

A counter-protestor, 20-year-old Deandre Harris, suffered a concussion and multiple injuries after being beaten by Unite The Right supporters in a parking garage. Three people were charged with attacking Harris.

A neo-Nazi, 36-year-old Christopher Cantwell, remains in jail in Charlottesville after being arrested for actions during a tiki torch march in which he and other alt-righters chanted “Jews. Will Not. Replace Us.”