The tweets, sent early Wednesday morning, originated with Jayda Fransen, Deputy Minister of the Britain First party. The party is known for spreading Islamophobic and racist videos, many of which were proven to be fake.

The tweets which came with no accompanying note or explanation from Trump, were bracketed by missives about the U.S. economy and a story about CNN boycotting the White House Christmas party this year.

Trump added no commentary of his own when retweeting Fransen. 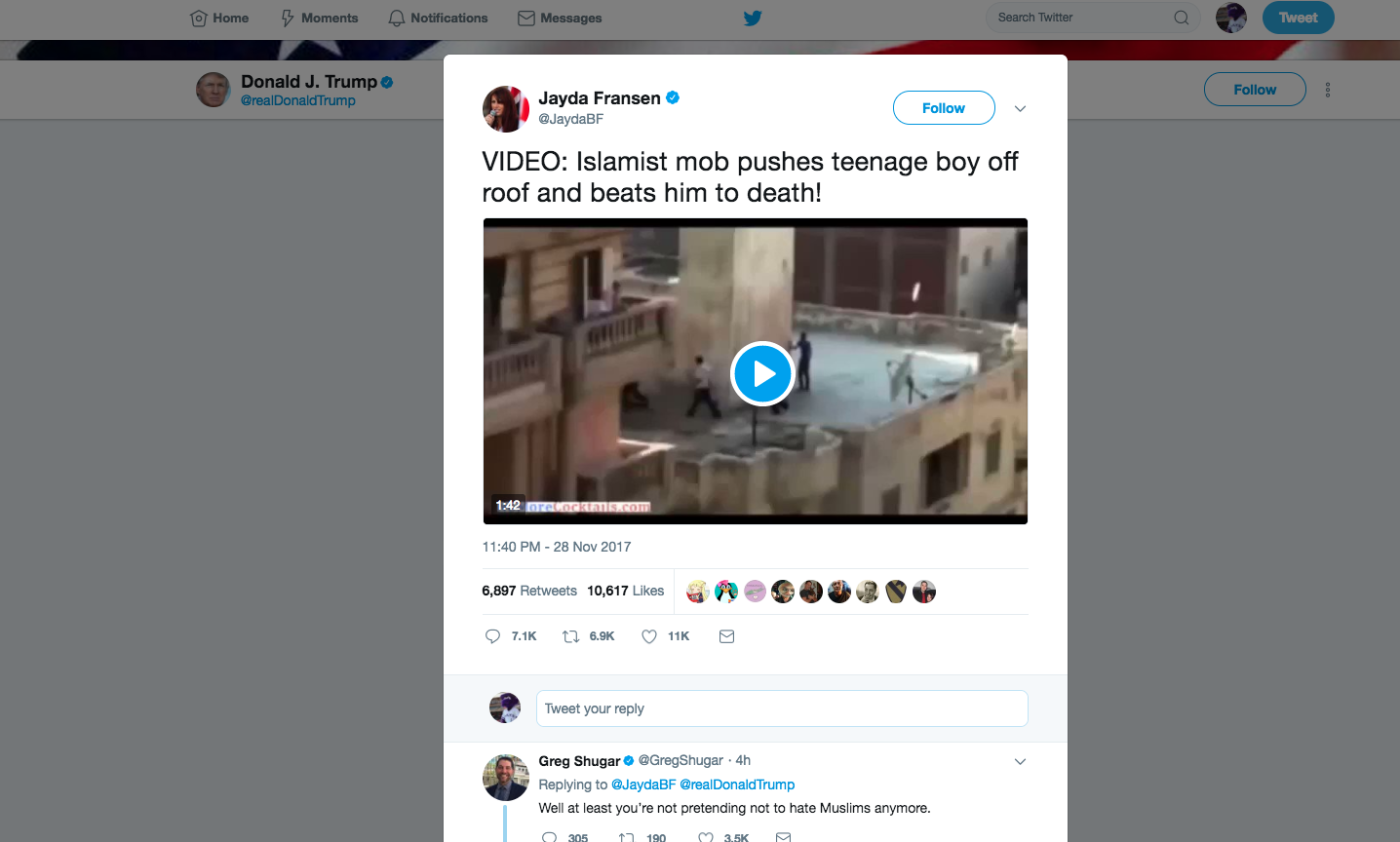 Fransen was charged last week with using “threatening, abusive or insulting words or behavior” during a speech made at “Northern Ireland Against Terrorism” during a speech in Belfast in August.

She was also found guilty of religiously aggravated harassment for verbally abusing a Muslim woman in front of her children last year.

“We are talking about some of the most extreme people on the far right in Europe and we, the 'NEVER AGAIN' Association, are shocked by giving any type of legitimacy to such groups by the U.S. president,” said Dr. Rafal Pankowski, co-founder of the NEVER AGAIN Association, which tracks extremists in Poland.

On Twitter, reaction to Trump’s retweets was quick and damning.

“Well, at least you aren’t pretending not to hate Muslims anymore,” wrote Greg Shugar, co-founder of the clothing outlet the Tie Bar.

A member of the British Labour Party, Jo Cox, was killed in 2016 by Thomas Mair, who allegedly shouted “Britain first” during the attack. Mair was a supporter of the Neo-Nazi National Alliance, at one time the signature hate group in the United States.

“Trump has legitimized the far right in his own country, now he’s trying to do it in ours,” Brendan Cox tweeted. “Spreading hatred has consequences & the President should be ashamed of himself.”

“He’s condemned for showing us what the fake news media WON’T,” Trump wrote. “Thank God for Trump! That’s why we love him!”

And, the latest tweets aren’t Trump’s first dance with Fransen and Britain First. He’s retweeted inflammatory anti-Muslim and anti-immigration posts from her and the group at least 10 times.

One video, which appears to have been edited, shows someone being tossed off a roof, then beaten. A second shows a heavily bearded man in robes throwing a statue of the Virgin Mary to the ground and it breaking to pieces. 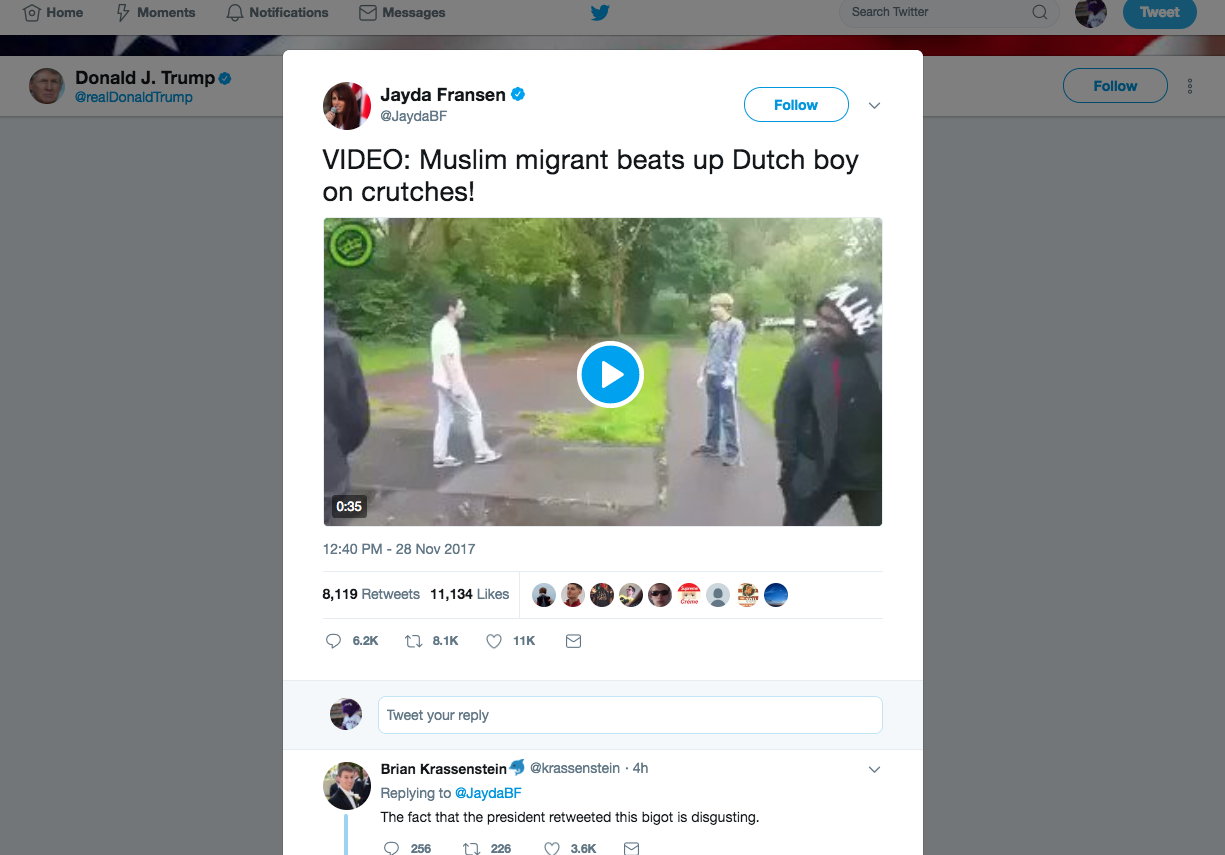 The third video shows one person beating up a second person, who is on crutches. The video carries the original title “Muslim migrant beats up Dutch boy on crutches.” The clip has the logo of the Dutch video sharing website Dumpert, which hosts uploaded content like YouTube.

Jayda Fransen and Britain First have involved in supporting the extreme hate-preacher Jacek Miedlar and she spoke alongside him at a November 11 rally in Wroclaw, Poland.

According to the NEVER AGAIN Association, which tracks racist organizations in Poland, Fransen also joined a protest in support of Miedlar in front of a court in Warsaw this summer. Miedlar had threatened a female MP with using a razor blade against her on Twitter.

Another speaker at the Wroclaw rally was Piotr Rybak who was jailed this week for burning a Jew effigy in 2015. Both Miedlar and Rybak traveled on her invitation to address a Britain First rally in the UK earlier this year, but they were stopped by the British authorities, another Polish supporter of Britain First was there (Marian Lukasik) and he called for the assassination of Angela Markel while giving an interview during the demo. These are examples of this very strong connection with some of the most extreme people on the European far right.

During his 2016 presidential campaign, the bombastic Trump pushed a proposed ban on all Muslims coming to the United States and has tried to enact such a policy after taking office, only to find it tied up in court.