Former director of ADF International, Benjamin Bull, has taken a position with the Plano, Texas-based anti-LGBT and anti-choice group First Liberty Institute. Bull has been charged with launching and leading First Liberty’s efforts in Washington, D.C.

Bull has a long history on the anti-LGBT right, serving not only with ADF International, but also in the past as general counsel of the American Family Association* and executive director of the Pat Robertson-founded American Center for Law and Justice’s international arm, the European Center for Law and Justice and he has also worked closely with the World Congress of Families*. 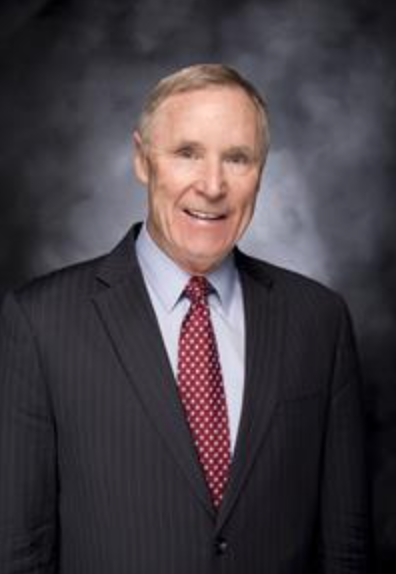 When an Indian court re-criminalized homosexuality in 2013, Bull spoke in favor of the move, saying that the “net effect is to protect the integrity of the family and by extension to protect traditional marriage.”

The First Liberty Institute (formerly Liberty Legal Institute), founded by Texas attorney and longtime anti-LGBT and anti-choice activist Kelly Shackelford in 1997. Like other organizations of the Christian Right, FLI paints Christians as “victims” of oppression and works to implement anti-LGBT policies and push lawsuits that could codify discrimination against LGBT people under the guise of so-called “religious liberty.”

Media Matters wrote about the letter and posted the meme, provided a link to the email (which is no longer available), and noted that C-Fam repeatedly used variants of the phrase “homosexual fascists,” thus comparing LGBT people to Nazis. The email also included the line, “We will always call homosexual behavior sinful, offensive, and deeply harmful to the individual who practices it and to society at large.”

C-Fam was granted consultative status at the United Nations in 2014, which gives them access to UN missions and treaty-drafting and places them in a position to influence policy. The U.S. State Department named C-Fam in March of this year to its delegation to key UN meetings during the UN’s annual Commission on the Status of Women, which is a set of important meetings on women’s equality and empowerment.

C-Fam’s activities at the UN stand in stark counterpoint to its rhetoric, in which it routinely bashes the UN

C-Fam is perhaps best known for the inflammatory statements of its president, Austin Ruse, who has supported Russia’s criminalization of speech with regard to homosexuality, ridiculed transgender people and used anti-trans slurs, linked homosexuality to pederasty, and called for left-wing professors to be “taken out and shot.”

The site lists what it terms are “anti-Christian” organizations. Most are LGBT equality groups, though some, like the Trevor Project and the Ali Forney Center, help LGBT homeless youth and another aids LGBT victims of domestic violence. CCRW lists the United Nations and the American Psychological Association as “anti-Christian” and though it claims on its website that it does not list government entities or “the educational establishment,” the list includes the Oregon Department of Education, the Wisconsin Department of Public Instruction, the Michigan Department of Education (all government entities) and the Centers for Disease Control, also a government agency. The list also includes the National Education Association and the American Federation of Teachers (both of which seem to fit Klingenschmitt’s definition of the “educational establishment”).

The site, which attempts to validate its anti-LGBT rhetoric through Martin Luther King, Jr., also refers to “same-sex sodomy” as “biologically and spiritually disordered” and places gay marriage in scare quotes, referring to it also as “mock marriage.” 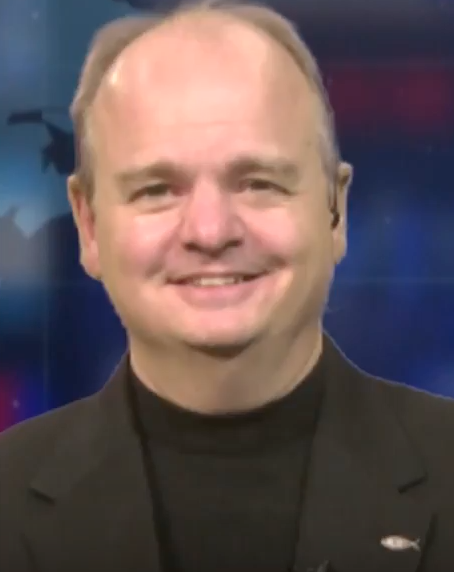 The address for donations is actually the address for another Klingenschmitt project, Persuade the World Ministries, and the phone number has a Washington, D.C., area code and appears to be Barber’s.

Klingenschmitt is a former Navy chaplain who refers to himself as “Dr. Chaps.” He has made numerous anti-LGBT statements over the years. He has claimed that demons and demonic spirits possess LGBT people; that demonic spirits at ABC are “bringing sodomy” upon America; has referred to gay adoption as a “recruiting tool” for homosexuality (and a “child abuse tool”) and implied that gay parents lust after their children.

While in the service, Klingenschmitt was found guilty in 2006 of disobeying a direct order when he appeared in uniform in front of the White House at a political protest, which is against military regulations. Klingenschmitt claimed he was being persecuted for expressing his religious views.

He had been a vocal critic of the Navy’s policies on prayer in ceremonial settings and had accused his superiors of pressuring chaplains to offer generic and nonsectarian prayers. In March of 2006, Klingenschmitt appeared in uniform at a news conference in which former Alabama chief justice Roy Moore and others criticized then-President George W. Bush’s lack of action on the chaplain’s complaints. Klingenschmitt claimed he had prior permission to wear his uniform when conducting a “bona fide worship service or observance.”

It was revealed at his court-martial proceedings that Klingenschmitt had received clear orders from his superiors not to wear his uniform at media events or political protests. He was found guilty by a jury of five Navy officers of disobeying a lawful order.

He was formerly discharged in 2007 in the wake of years of complaints about him and his lack of support in the chain of command, a decision that Klingenschmitt challenged for years after that, finally losing his lawsuit in 2014.

The Reading city council approved the ban December 18, joining Philadelphia, Pittsburgh, and Allentown in banning the practice for minors.

Several states, counties and municipalities across the country have passed such bans, but the majority of states (41) have not.

The city of Helena’s city commission voted unanimously December 18 in favor of joining the Montana League of Cities and Towns in its support of the lawsuit filed by the American Civil Liberties Union of Montana.

The lawsuit claims that the so-called bathroom bill, which is a proposed ballot initiative, is unconstitutional and is asking the court to prevent it from being placed on the November 2018 ballot. The initiative would require all government entities in the state to force trans people to use restrooms in accordance with their sex as assigned at birth, regardless of how they identify and live.

Helena city attorney Thomas Jodoin said that the city will not be a plaintiff like Bozeman and Missoula, but will be providing other arguments against the state. The state of Montana has filed a motion to dismiss the lawsuit.

Longtime anti-LGBT group Montana Family Foundation (MFF) is behind the initiative. A similar measure the group pushed earlier this year was rejected by the state legislature. MFF claims that the initiative will “protect” women and children from predators, a popular myth used by the anti-LGBT right to ban transgender people from using public restrooms and facilities in accordance with their gender identities.

Two anti-LGBT judicial nominees for the federal courts withdraw, one other confirmed

Last week, the Trump administration appears to have given up on two nominees for the federal judiciary, possibly after urging from Sen. Chuck Grassley, chairman of the Senate Judiciary Committee. One, Brett Talley, offered to withdraw. He had been nominated to a district court slot in Alabama. He had never tried a case and had received a unanimous “not qualified” rating from the American Bar Association. Talley had also not revealed that his wife is chief of staff to White House counsel Dan McGahn, a possible conflict-of-interest. Alabama senator Richard Shelby asked Talley to back out of the process, according to CNN.

Another, Jeff Mateer, had been nominated to a federal bench seat in the eastern district of Texas, but anti-trans comments he made in recent speeches brought media attention to him. Mateer referred to transgender children as part of “Satan’s plan” in 2015, lamented bans on “conversion therapy” for LGBT minors, claimed that same-sex marriage could lead to other “disgusting” new forms of matrimony. Mateer made the remarks at a conference hosted by anti-LGBT pastor Kevin Swanson, who has called for the execution of LGBT people in accordance with biblical law.

Mateer, who has no judicial experience, is current Texas assistant attorney general, formerly with the anti-LGBT and anti-choice First Liberty Institute, a hardline Christian legal group that works to enshrine anti-LGBT discrimination under the banner of so-called “religious liberty.” 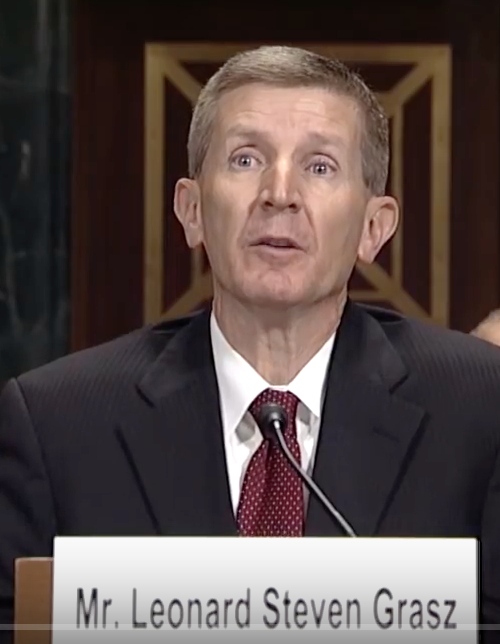 A third nominee, Leonard “Steve” Grasz, was confirmed, though he was rated “unqualified” by the American Bar Association, which stated that Grasz’s “passionately held social agenda appeared to overwhelm and obscure [his] ability to exercise dispassionate and unbiased judgment.” The ABA committee found that Grasz’s bias and lack of open-mindedness were “problematic.” Grasz serves on the board of the anti-LGBT Nebraska Family Alliance, which is hostile to anti-discrimination protections for LGBT people. The NFA also supports harmful ex-gay therapy and anti-trans policies.

President Trump has nominated law professor Caren Harp of the hard-right anti-LGBT and anti-choice Liberty University, to oversee the Department of Justice’s Office of Juvenile Justice and Delinquency Prevention.

Founded in 1971 by the late Reverend Jerry Falwell (sr.) in Lynchburg, Virginia, the school has attracted leading anti-LGBT and anti-choice activists to its faculty over the years. Mathew “Mat” Staver of Liberty Counsel (LC)* is a former dean of the LU law school. He resigned from that position in late 2014.

Law professor Rena Lindevaldsen worked closely with Liberty Counsel on the Lisa Miller case, in which LC represented Miller, who left her same-sex domestic partner and took their daughter, refusing to allow her ex to see the child even after court rulings that stated she must. Miller, who claimed she was no longer lesbian, allegedly kidnapped the child in 2009 and left the country. Lindevaldsen wrote a book about the Miller case, which claims that people are “lured” into believing they are born gay. The book’s description at Amazon claims that it “exposes the truth about the homosexual rights movement and its destructive consequences.”

Matt Barber, of the virulently anti-LGBT site Barbwire.com (which routinely links homosexuality to pedophilia), is the associate dean for online programs at Liberty University School of Law and an adjunct assistant professor of law. Barber recently launched another anti-LGBT group, Christian Civil Rights Watch (see above).

In a surprise move, the president re-nominated Chai Feldblum this week for a third term on the Equal Employment Opportunity Commission, a decision that has infuriated the anti-LGBT evangelical right, a primary part of his support that has thus far been enjoying unprecedented and unchecked influence in this administration.

The EEOC enforces federal laws that prohibit workplace discrimination. Feldblum joined it in April 2010, during the Obama administration.

Feldblum, who has spent years working for LGBT equality, has been the target of anti-LGBT vitriol for years, including from FRC and Alliance Defending Freedom. It remains to be seen if the Senate will re-confirm her.

David Ermold, one of the gay men denied a marriage license after the U.S. Supreme Court decision that made marriage equality legal in the country, has announced his candidacy to run against Rowan County, Kentucky clerk Kim Davis.

Davis, who claims she can’t grant same-sex marriage licenses because they’re against her religious beliefs, garnered national headlines two years ago when she refused to issue marriage licenses to same-sex couples in violation of federal law. The Liberty Counsel* took her on as a client and after months of legal battles that included a few days in jail for Davis for contempt of court, Davis eventually lost her most recent appeal, leaving Kentucky taxpayers to foot a bill for over $200,000 to the attorneys for the same-sex couples denied licenses, though Liberty Counsel continues to claim that it won the case.