Goodson started his crusade last June, when he found out that the local library had two LGBT displays up. One, a bulletin board decorated with rainbows, had a flyer reading “Be inspired: Celebrate pride month” as well as materials on the board stating that June was recognized by the American Library Association as LGBT book month. The second display was a table near the children’s desk that included informational sheets that had books with LGBT themes divided into age groups. Some of the books were on display on the table.

According to a January 5 article in the Temple Daily Telegram, the display received little feedback until an August 4 Facebook post by CCC that criticized it. Some 20 residents spoke in favor and against the displays at an October meeting of the library board.

The article reported that the CCC has launched a petition calling for library and city officials to “refrain in both policy and practice from further advocacy regarding sexual and moral issues and practices,” following a longstanding Christian Right practice of claiming that LGBT identity is primarily a sexual and thus “behavioral” matter and that being LGBT is a matter of “lifestyle choice.”

Goodson claimed that he and CCC were not objecting to books in the library, but that, “We are objecting to a display that is advocating for a lifestyle that is dangerous, immoral and undermining to the values of many of the families that frequent that section of the library.”

Furthermore, Goodson was quoted as saying,

MassResistance has been touting Goodson’s battle since last fall on its website and claims that Goodson conferred with MR in November then decided to file a formal “Request for Reconsideration” of the library board’s decision to take no action after the October meeting.

Goodson will allegedly be donating a copy of MR’s book, The Health Hazards of Homosexuality to the library.

Tony Perkins, the president of the Family Research Council was interviewed on POLITICO’s “Off Message” podcast and admitted that Christian evangelicals were willing to give President Trump a “mulligan” (a golf term meaning “do-over”) with regard to his questionable behaviors and past in exchange for favorable policy decisions and support.

Perkins made the comments after it was revealed that Trump had sex with adult film actress Stormy Daniels four months after current First Lady Melania gave birth to their son. “We kind of gave him — ‘Alright, you get a mulligan. You get a do-over here,’” Perkins said in the podcast. Perkins further claimed that evangelical Christians “were tired of being kicked around by Barack Obama and his leftists. And I think they are finally glad that there’s somebody on the playground that is willing to punch the bully.” 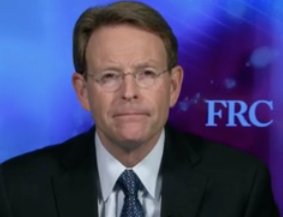 Perkins has also been busy on the international front, with yet another visit outside the U.S. (he visited Egypt late last year), this time to Guatemala with a group of evangelicals, where he met with Guatemalan president Jimmy Morales, vice president Jafeth Cabrera and “key members” of the Morales administration. According to a press release dated January 26, the meetings dealt with “recognizing Jerusalem as the undivided, eternal capital of Israel” and a discussion of “other vital issues” such as support for the “sanctity of human life” and “religious freedom.”

I was very encouraged to learn more about President Morales' parallel efforts to President Trump in seeking to protect and enhance the religious expression of Guatemala's citizens. President Morales is setting an example for other world leaders as a champion of faith, family and freedom.

FRC also sent Travis Weber, its director of religious liberty, to Slovakia to “[advance] FRC’s issues in Central Europe.” According to FRC, Travis was invited to speak by Christian Fellowship, “a non-denominational church with affiliates all around Slovakia and the Czech Republic.”

FRC also claimed that Travis spoke before a gathering of the Slovakian Parliament and communicated “what FRC has done to advance its issues under the Trump administration.”

A federal judge dismissed a lawsuit brought by Liberty Counsel against nonprofit database GuideStar for flagging 46 organizations as hate groups as designated by the SPLC.

In granting GuideStar’s motion to dismiss, according to The NonProfit Times, the judge ruled that GuideStar’s flagging of the groups with SPLC’s notation is not commercial speech “because the notation does not fall under the type of speech that violates the Lanham Act.”

Liberty Counsel had sued GuideStar under provisions of the Lanham Act, which is the primary trademark statute of law in the United States.

Mathew “Mat” Staver, Liberty Counsel president, told The NonProfit Times that the ruling will be appealed to the 4th Circuit Federal Court of Appeals.

The International Organization for the Family, the parent organization of World Congress of Families, formally announced that the 2018 WCF conference will take place September 13 through 16 in Chișinău, Moldova, the third consecutive gathering to be held in Eastern Europe.

Brian Brown, president of WCF, held a press conference with Moldovan president Igor Dodon, who took office in December, 2016. Dodon has been pushing for closer ties to Russia, and said in his campaign that he would break trade agreements with the European Union and join the Putin-dominated Eurasian Union. 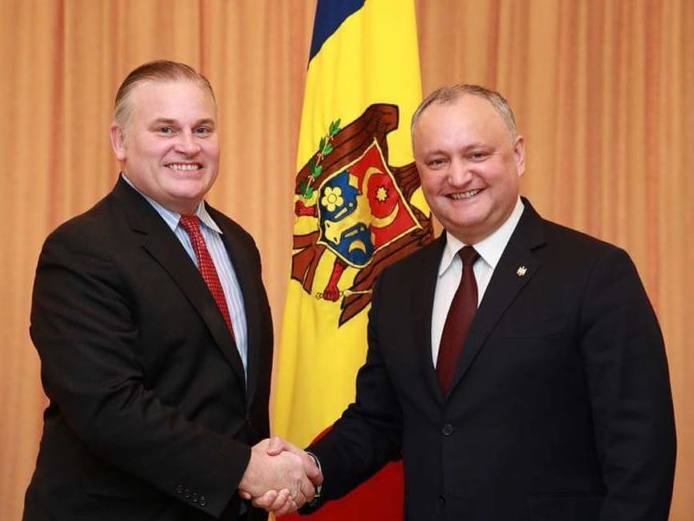 American anti-LGBT/Christian Right groups have also been trying to forge closer ties to Putin’s Russia, seeing opportunities via anti-LGBT and anti-choice sentiment and laws in Eastern Europe to further their stringent and restrictive ideas about what constitutes a “family.”

Dodon posted on Facebook in December, according to the site Orthodox Christianity, that he had invited Patriarch Kirill for the forthcoming WCF in Moldova. The invitation came during a meeting Dodon had at the Danilovsky Monastery in Moscow. Nearly 97 percent of Moldovans identify as Orthodox.

After a months-long wait, Republican Kansas governor Sam Brownback was narrowly confirmed by the Senate to be ambassador at large for international religious freedom. The Senate split along party lines in the confirmation vote, 49 to 49. Vice President Mike Pence cast the deciding vote, in favor of Brownback’s confirmation.

Brownback, who resigned the governorship effective January 31 to take the new position, served seven years as Kansas governor after serving in both chambers of congress, has a history of anti-LGBT and anti-choice stances and policies. His popularity in Kansas has been sinking since he oversaw the largest income tax cuts in the state’s history, resulting in wholesale cuts to state services and missed revenue forecasts that caused members of his own party to undo his signature policy last year.

Brownback rescinded protections for LGBT state employees in 2015 and refused to condemn foreign laws that criminalize LGBT people. The 2015 law had been in effect for eight years, and protected state employees from being fired, harassed, or discriminated against because of their sexual orientation or gender identity.

The ambassador at large for international religious freedom heads the Office of International Religious Freedom at the Department of State.

The Texas GOP has censured outgoing Speaker Jim Straus, a moderate Republican, for thwarting legislation, including blocking bills that would have limited transgender people’s access to public bathrooms.

The move, according to Reuters, “was an unheard of step for the party in the most populous Republican-controlled state.” Mark Jones, a political science professor at Rice University in Houston, noted that the conservative Tea Party wing of the Texas GOP was trying to stamp out the remaining centrists in the party.

Straus has served five terms as speaker, but announced in October that he would not seek re-election.

After the censure vote, a Straus spokesman was quoted in the Texas Tribune as saying that the speaker “expected these antics from some people when he opposed their bathroom bill and helped prevent the harm it would have brought to our state.”

Last year, comprehensive adoption legislation was derailed because of an attempt to include a religious exemption amendment. Supporters of the amendment killed the bill to avoid the legislation passing without their amendment.

The Georgia Senate passed a version of that adoption bill in mid-January, from which the religious exemptions amendment had been removed. Proponents, however, vowed to continue the fight.

The original amendment would allow private adoption agencies receiving public funds to discriminate against LGBT couples and others based on their mission statements.

State senator William Ligon (R-Brunswick), who originally proposed the amendment, pledged that when he revives the bill, “The people of this state will see exactly where their government stands on this issue.”