A new 'King and Queen' of medievalist recreators' thought they could 'restore' the ancient swastika to its original benevolent meaning. They found out otherwise.

The quasi-medieval vibe of the “Renaissance faire” scene isn’t where most people would expect to see neo-Nazi symbolism such as a swastika — even though there might be a historical justification for it. So it shocked and angered members of the Society for Creative Anachronism (SCA) — the leading organization for such “living history” events and activities — when the newly anointed “King” and “Queen” of its West Coast “kingdom” wore raiments festooned with swastikas for their coronation ceremony. 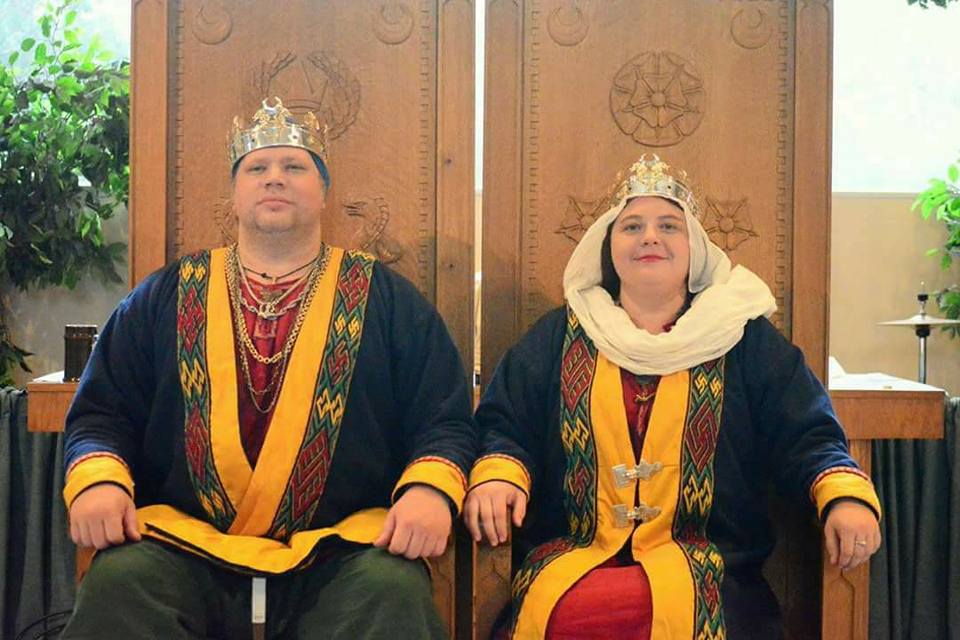 “Athanaric II” and “Sigriðr II” at their coronation Jan. 6 in California. Source: Facebook.

The short-lived uproar quickly ended when the offending King and Queen apologized and abdicated their thrones, and the weaver responsible for the ornamental swastikas — which were also accompanied by twin ‘H’ symbols, suggesting a reference to “Heil Hitler” — posted a public apology for his misjudgment. But the episode shook the SCA, which has a long-established reputation for avoiding such controversies and making their events welcoming across racial, ethnic and gender lines.

The question, as one SCA observer put it: “Are these people wearing swastika trim because they’re riding a crazy historical hobby horse even though it’s in bad taste? Or are they wearing swastikas because ‘authenticity’ gives them a cover that misdirects the symbolism away from white supremacy?”

At the heart of the controversy is the historical lineage of the swastika. Before it was adopted by German Nazis in the 1920s as the symbol of their violently racist ideology, the swastika had a long and wide-ranging history as symbol throughout a number of cultures around the world, with a similar broad range of meanings. Hindus and Buddhists have long woven into their iconography, and still do so today. The word itself has Sanskrit origins. It can be found in ancient Byzantine and Christian art, and in the art and symbols of the Hopi and Navajo tribes indigenous to the southwestern United States.

However, since the 1920s, when Adolf Hitler’s National Socialists adopted the swastika as their symbol and adorned their banners, uniforms and war machines with it — thereby making it a symbol that globally evokes fear, loathing and genocidal racial hatred. As a result, its use in other settings and with other meanings, even traditional ones, has either vanished altogether or has become subdued. The Navajo peoples specifically renounced its use after World War II.

According to historian Ken Mondschein, the design used by the SCA “royals” in their January 6 coronation raiments “came from the baldric of a sword found in 1933 in an archaeological dig in southern Norway. Both the swastika and ‘HH’ elements are documentable to the original. The Hs are the rune Hagall in the Elder Futhark alphabet (used in Scandinavia from the 2nd to the 8thcenturies CE). Both symbols were later appropriated by the Nazis. The sword itself has a history with the Third Reich: the Nazis coveted it as an authentic piece of ‘Aryan’ heritage. They even had reproductions made of it. But it was hidden by the Norwegians until after the war.”

Despite its historicity, swastikas for personal heraldry were banned within three years of the SCA’s founding. I could see someone studying tablet weaving making a small sample to test a theory or improve their skill, since this is a complicated pattern. I could also see entering a piece in a competition with appropriate historical and contextual notes. However, there are plenty of other motifs that can be worn in lieu of swastikas.

The incident reminded others involved in the “neo-Pagan” ceremonialism often associated with SCA activities that the so-called “heathen” community has been struggling for years to distance themselves from far-right extremists who sometimes are drawn to their belief systems as an alternative to Christianity. This is particularly the case with Norse religions such as Asatru and Odinism, which have a history of being favored by neo-Nazis.

Another SCA member named Harold Feld chimed in on Facebook: “The matter of the swastika, whether or not called the fylfot, is not a mere debate over the meaning of an ancient symbol. It is a symbol that is used *today,* actively, and with intent. Yes, I have myself stood in Ein Gedi and seen the ancient symbol as a design in a mosaic on a 1st Century synagogue floor. I am aware — have been made aware for many years in loving detail by the 'defenders' of the display of the fylfot — that it was a broadly used geometric design in a large number of cultures ranging from Native American cultures through Europe and India and East Asia.

“All of which is irrelevant to the fact that I can see it spray painted on Jewish institutions meaning only one thing. It is irrelevant when those who commit murder here and now.” 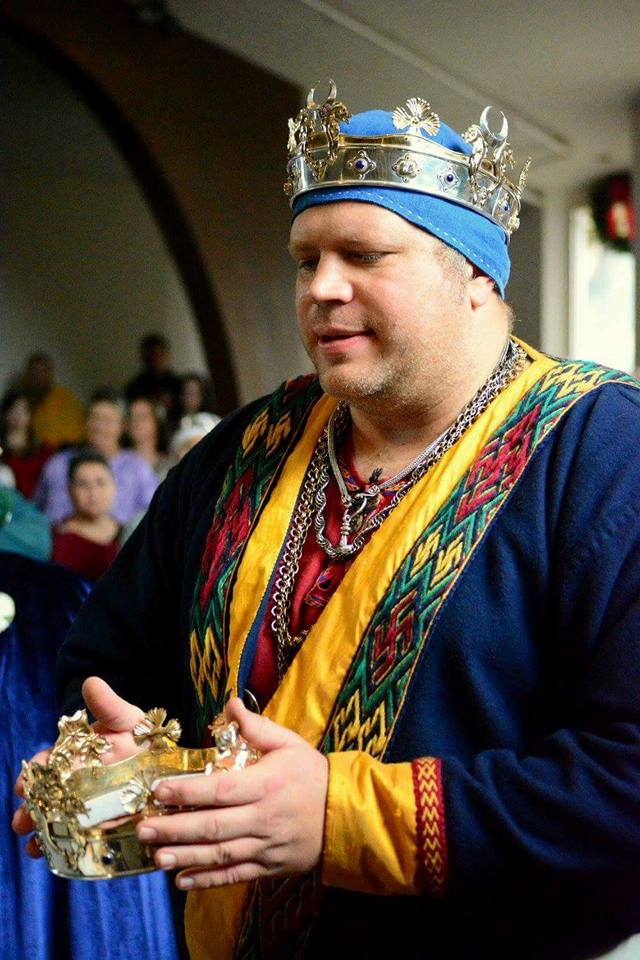 The “King” and “Queen” — known to SCA members as “Athanaric II” and “Sigriðr II”, and selected through an annual medieval fighting tournament; according to SCA members, Athanaric is a police officer in Nevada — at first issued simple apologies and said they’d make sure the offending raiments were never used again. “Sometimes you get so exited about something you downplay or ignore the negatives,” they posted on Facebook. “In this case we have done so and have hurt some members of the populace. We got very exited about a piece of very complex historical art and making an extremely accurate presentation and felt the differences to modern interpretations would be sufficient and that everyone would agree with us. We were wrong. For this we apologize. Know that no offense was intended, no hidden message to interpret, and no hate to be displayed. For any communities hurt we are sorry to have caused you pain. The art created will not be further displayed upon the throne.”

A few days later, the pair simply stepped down altogether, with an abject apology: “We wish We could offer an explanation of our actions that was better than stupidity mixed with selfish arrogance. We understand that this has offended many of you; We are sorry for having done it. It should not be done. It should not be tolerated.”

Similarly, the medievalist weaver responsible for creating the raiments offered a long, rambling apology: “This band has several sunwheel geometric motifs all over the band. I had been wanting to try and weave this band as it would push my weaving and test my hands and mind to try and replicate. I had been studying it for months when I was contacted by now-TRM Caid about the fact thatthey wanted to step up in the Saxon period. I took this opportunity to offer my services at no charge to weave this band. This was my idea. …My thought was that it could be seen for the art it was in the historical context of the Saxon period. I WAS WRONG.

“… I guess I thought I could help try and restore the images to their prior glory before hate and extremism had soiled it. I WAS WRONG.”

The SCA’s board issued an official statement condemning the appearance of the swastikas and vowing an investigation: “The SCA was founded on and continues to be governed by the concepts of chivalry and honor, and strives to include and be respectful of all people, regardless of race, gender, disability, sexual orientation, and politics.”

Observed Feld: “There is a saying: ‘Do not piss on my leg and tell me its raining.’ Likewise, do not display the swastika and tell me it is merely a representation of an ancient geometric design and that the old two points of difference rule somehow makes the interpretation of this symbol unrelated to its modern form. At the least, do not pretend surprise when those for whom this symbol is used to this day as a real threat regard your defenses as a slap in the face in a place we considered ourselves welcome.”