It could have been a triumphant weekend for racist “alt-right” front man Richard B. Spencer capped by a victorious speech at Michigan State University.

Instead, it turned into a disaster, as restaurants and clubs booted Spencer and his followers seeking to hold a meeting/party and more people were arrested outside of his speech than heard it inside.

Spencer spoke at the agricultural pavilion on the East Lansing, Michigan campus on Monday. But, only about a dozen people turned out to hear the speech as more than 200 students, professors, antifa activists and anarchists protested outside on a cold, windy overcast day.

And, while the dozen made it in after getting a police escort through a gauntlet of taunts and cheers to “Nazis Go Home!” 24 people, including Gregory Conte, a Spencer ally and operations director for the National Policy Institute, were arrested. 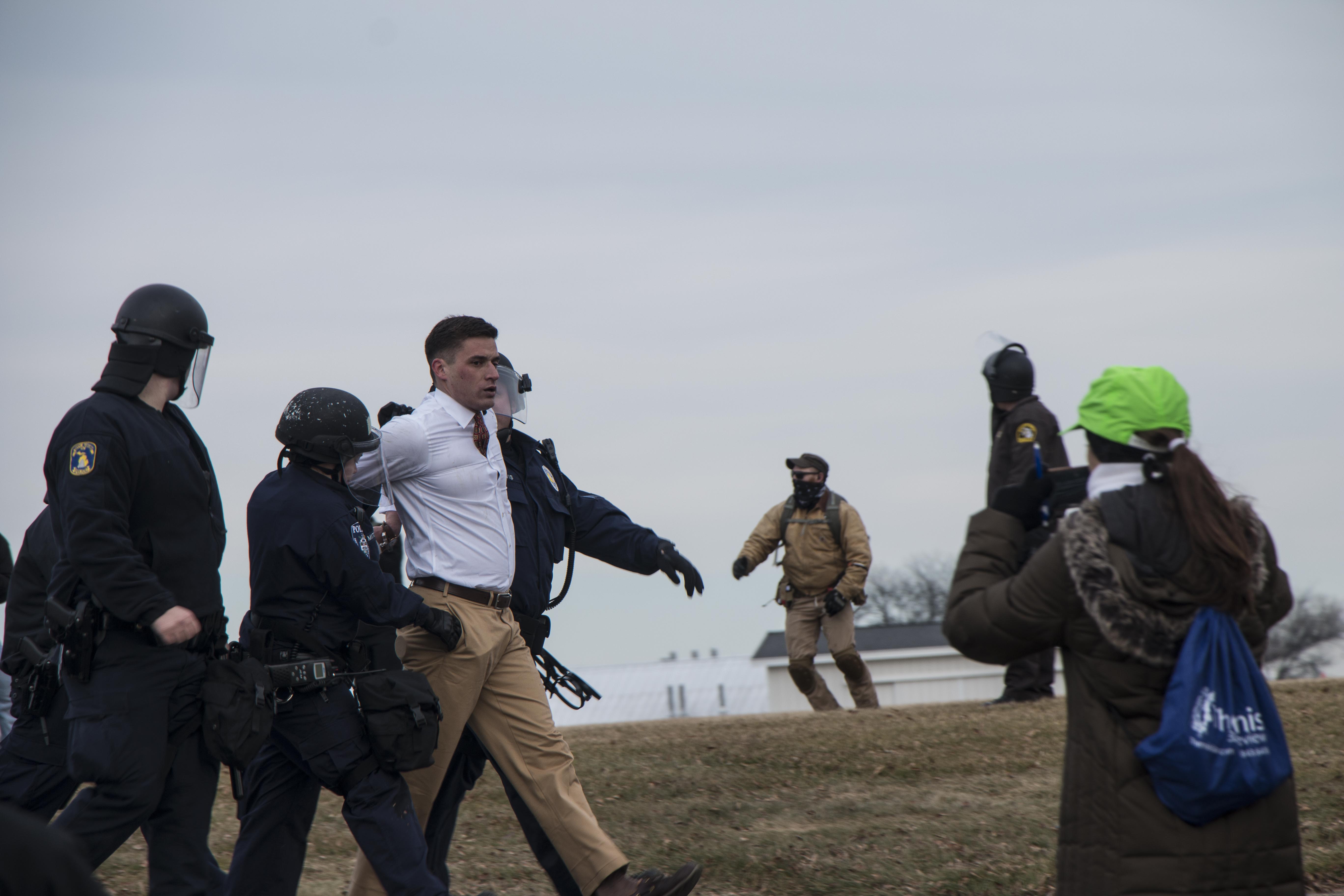 Gregory Conte was one of 24 people arrested during protests outside Richard Spencer speech at Michigan State University. Photo by Petra Daher.

It was an ugly end to what turned into a bad weekend in Michigan for Spencer.

A conference that didn’t happen

Spencer came to Michigan, in part, to attend a conference for the Foundation for the Marketplace of Ideas (FMI), a self-described think tank run by attorney Kyle Bristow of Clinton Township, Michigan.

The conference, which was pitched as having appearances by Spencer, Traditionalist Worker Party chief Matthew Heimbach and others, never really got off the ground.

After multiple Detroit area clubs and restaurants either cancelled or rejected the FMI conference over the weekend, which had been billed as a party with drinks, karaoke, and fun with other white nationalists, the group was hounded by anti-racist activists around the metro area, before ending up holding their conference and party at a private home in Ann Arbor.

Can’t give them away

Spencer secured the speaking date at Michigan State after his now-former attorney Kyle Bristow and Spencer’s booking agent, Cameron Padgett, sued the school and reached a settlement. It was the latest in a series of lawsuits — and threats of suits — that landed Spencer speaking gigs at Texas A&M, the University of Florida and Auburn University.

MSU provided a venue, but the date chosen was the first day of spring break for students, meaning a minimum number of people were on campus. 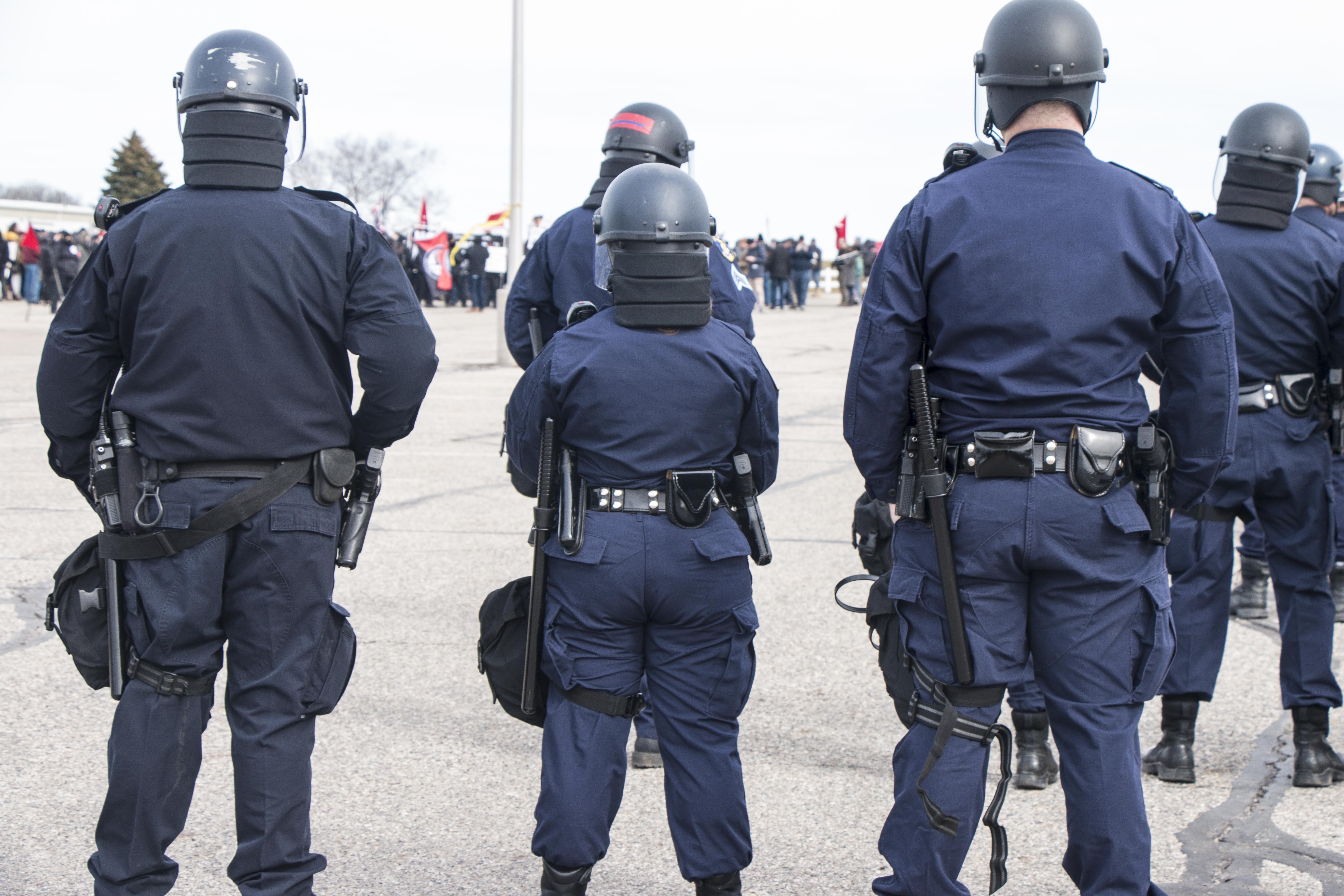 Padgett and Spencer received 360 tickets to the speaking engagement, but after weeks of advertising on Twitter and making it known seats were available to those who were screened, Spencer supporters were reduced on Monday to trying to give away seats at Macy’s at a mall not far from the university.

Even with that, a dozen people made their way to the Pavilion for Agriculture and Livestock Education, a facility that recently hosted a conference on water issues as well as a rabbit show.

Outside the venue, several hundred activists, some wearing scarves covering their faces, taunted anyone trying to get in to see Spencer.

They waved signs saying “Advocating Genocide is not free speech” and other banners with more colorful language.

As Spencer supporters approached, the activists taunted them with “Nazis Go Home!,” “Punch a Nazi in the face!” and cries of “F--- Nazis!” Many had to be escorted through a gauntlet of protesters by officers using bicycles as shields for those seeking to get into the pavilion.

What at times started out as yelling devolved into punches and rock throwing between the alt-right supporters and the protesters.

A confrontation with one of the nearly 100 police officers led to Conte’s arrest.

Conte shouted at an officer that they “have no plan” for crowd control “just like Charlottesville.” Conte then ran between protesters outside the building and declined to stop before an officer tackled him. He was arrested moments later.

The protesters also turned on the police, telling them that they were “defending Nazis” and chanting “Who do you protect? Who do you serve?” The officers, many carrying large wooden clubs, did not react or respond to the taunts.

Once inside, Spencer referred to the “chaos” outside, then launched into a fairly routine speech.

Spencer told the few supporters that he sees a “war on the white race.”

“Inclusion, diversity, this is the new morality at the end of history,” said Spencer, who posted several clips of himself on Twitter, but didn’t make a reference to the small crowd inside. 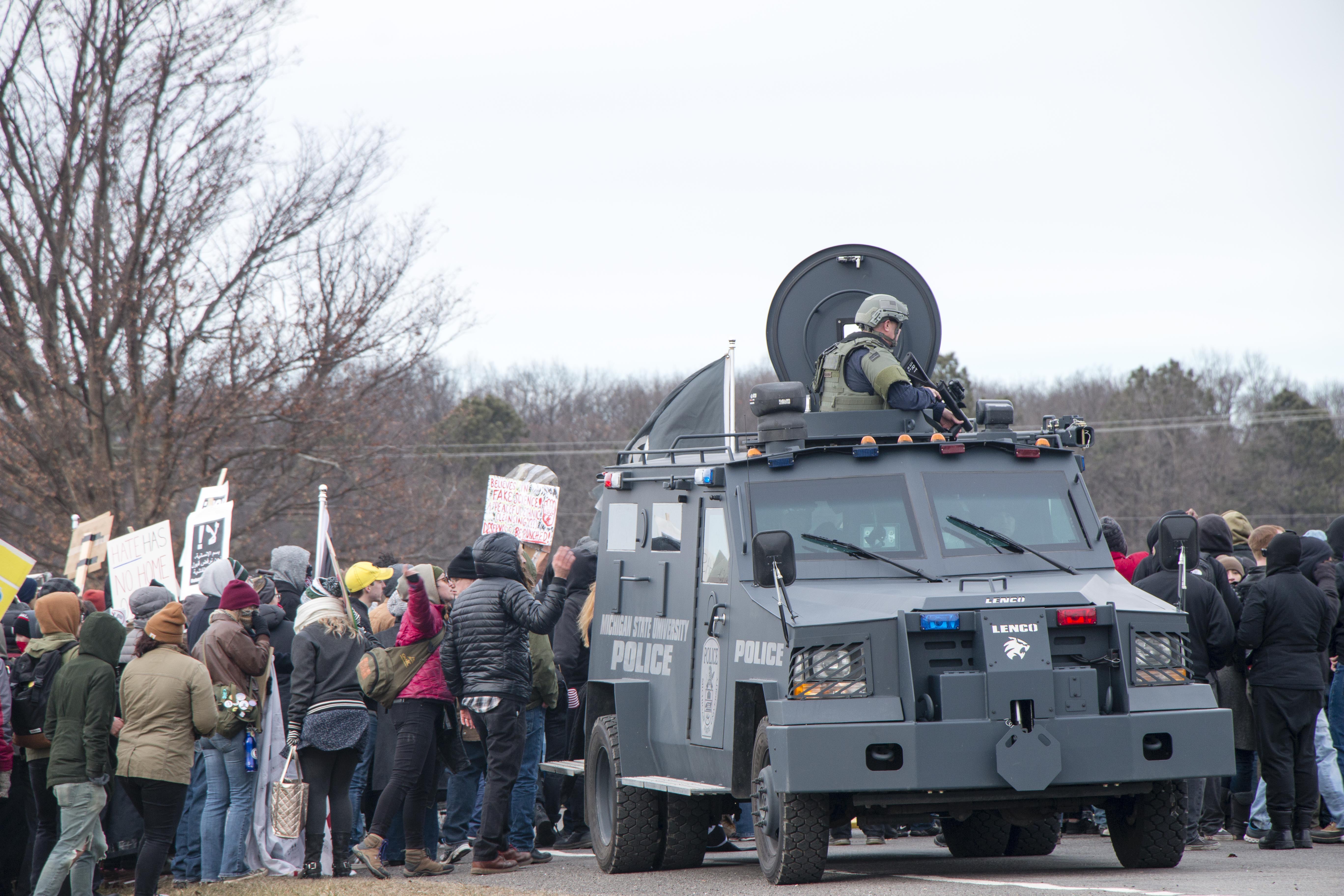 Michigan State University Police Capt. Doug Monette said 24 people were arrested outside the pavilion, which is more than a mile from the main academic buildings on campus. Among the charges, Monette said, are hindering and obstruction as well as weapons violations on the gun-free campus.

It wasn’t a message that resonated with the crowd outside.

“It feels a little bit like an attack because we have an outside person coming here who does preach like genocide and really, really hateful views, so we’re trying to protect ourselves from this outside threat,” said Michigan State graduate Erin Connolly.