The SPLC reported on the movement back in 2012 but decided to list groups for 2017 following the extraordinary rise of the racist “alt-right,” of which misogynist elements of the “manosphere” form its core. The ideology of Male Supremacy, with many different tributaries of influence and thought leading into it, is broadly defined as follows:

Male supremacy misrepresents all women as genetically inferior, manipulative and stupid and reduces them to their reproductive or sexual function — with sex being something that they owe men and that can or even should be coerced out of them. Driven by a biological analysis of women as fundamentally inferior to men, male supremacists malign women specifically for their gender. Their thinly veiled desire for the domination of women and their conviction that the current system oppresses men in favor of women are the unifying tenets of the male supremacist worldview.

While it was expected that the leaders of the two groups listed by the SPLC, Paul Elam’s A Voice For Men and Daryush "Roosh" Valizadeh’s Return of Kings, would protest (Roosh responded by blaming “the Jews”), what outraged the right-wing media was the following sentence in the profile of Male Supremacy:

Men’s rights issues also overlap with the rhetoric of equity feminists like Christina Hoff Sommers, who give a mainstream and respectable face to some MRA [Men’s Rights Activism] concerns.

Sommers, an American Enterprise Institute (AEI) scholar, took to Twitter and claimed that the SPLC “denounced” her as an “enabler of male supremacy.” She told the Weekly Standard that the SPLC was “blacklisting in place of engaging with arguments. They blacklist you, rather than try to refute you.” An email to Sommers’ assistant asking for clarification went unanswered. 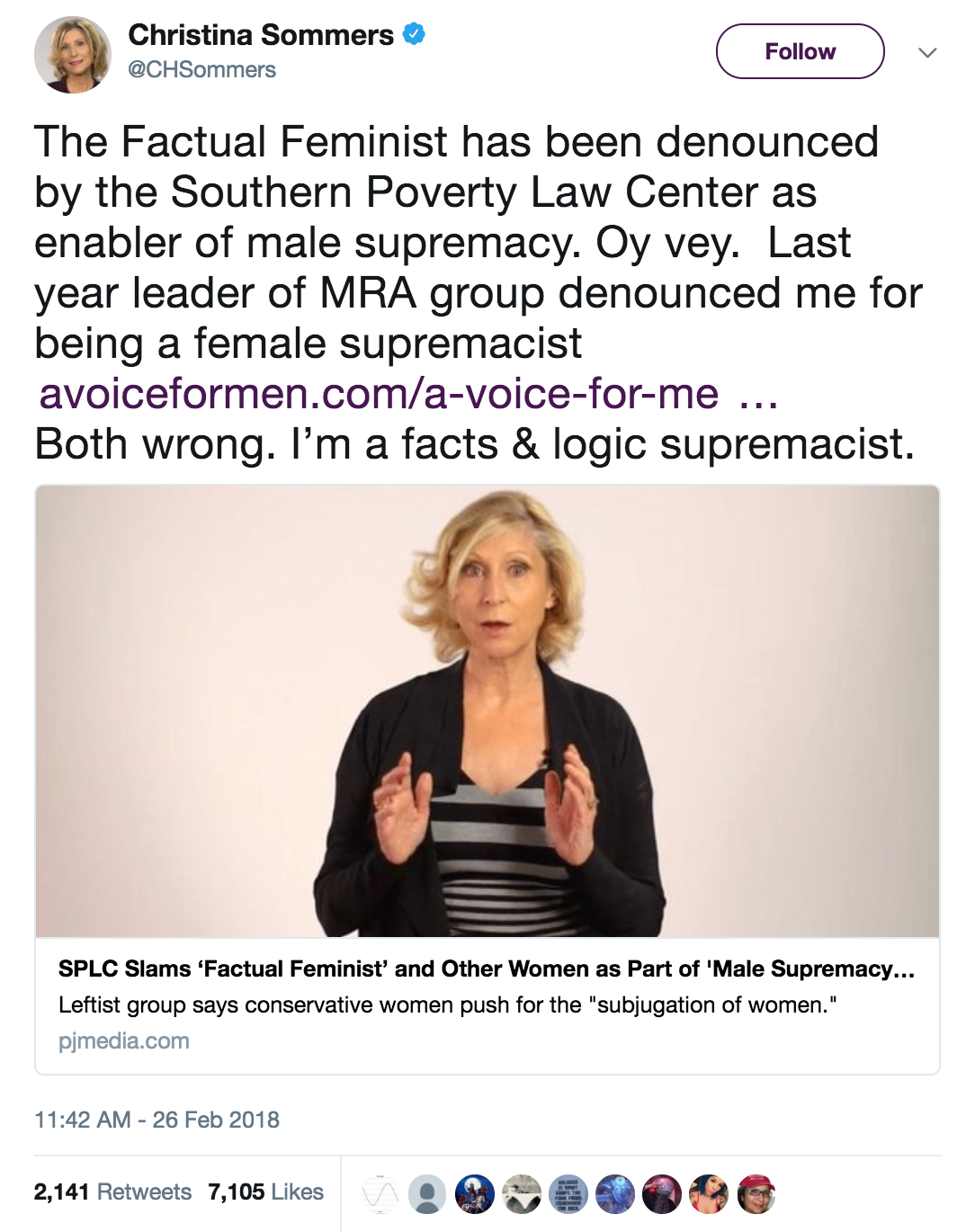 This rapidly degenerated into the false accusation promoted by Foundation for Individual Rights in Education Chief Research Officer to the President and CEO Pamela Paresky that the SPLC listed Sommers as an “extremist.” In rushing to the aid of the “Factual Feminist” many facts got trampled. Now Sommers is back in the news after facing a student protest at Lewis & Clark College and celebrated by elite opinion makers who all agree that college students are the gravest threat to free speech (as opposed to new laws introduced around the country to criminalize protest).

But using Sommers’ words, is she an “enabler of male supremacy”?

The claim made in the SPLC profile is narrower than Sommers’ reformulation. Sommers has written a book on the “war against boys” and has insisted that reported rates of rape and sexual abuse are exaggerated. These arguments undeniably “overlap” with MRA concerns. As Alex DiBranco at Political Research Associates points out, “claiming rampant false accusations of rape and violence is one of the most prevalent men’s rights and equity feminist talking points.” And further: “Equity feminism’s depiction of women as liars with ‘victim mentalities’ dovetails alarmingly with (and legitimizes) the online manifestation of the men’s rights movement, which uses more virulent and hateful rhetoric to convey the same argument.” The only label the SPLC gave Sommers, “equity feminist,” is one she embraces.

But what’s odd about Sommers’ grandstanding is her history with the MRA movement and the direct praise she’s received from its ranks. Sommers was a prominent apologist of a vicious, far-reaching misogynistic online campaign that fed directly into both the Male Supremacy movement and what would ultimately become the alt-right. Sommers, using her perch at one of the wealthiest and most powerful policy organizations in the country, defended Gamergate.

Gamergate was a years-long saga where male gamers systematically harassed female game developers and journalists with doxing, stalking and rape and death threats. Some of these women were targeted because they dared to be critical of the male-dominated space, others were attacked only for trying to exist within it. But to Sommers, the harassers were “just defending a hobby they love.”

This advocacy (Sommers dedicated at least one episode of “Factual Feminist” to defending the gamers) earned her the praise of many in the MRA movement. It also inspired some bizarre fan art and even a nickname, “Based Mom,” which Sommers enthusiastically embraced.

During the days of Gamergate, Sommers also made common cause with Milo Yiannopolous, appearing at several events with the former Breitbart News tech editor who rose to fame fanning the flames of harassment. Yiannopolous, last seen hocking milk thistle extract on an InfoWars broadcast, was exposed as a white nationalist enabler and bigoted bully who did very little of his own writing. But for a time, he was a hot commodity and a Sommers ally in the war against “political correctness” on college campuses and feminism, which Yiannopolous enjoyed likening to cancer. In the case of Yiannopolous, it appears the much derided campus protesters were a better judge of character and politics than Sommers. 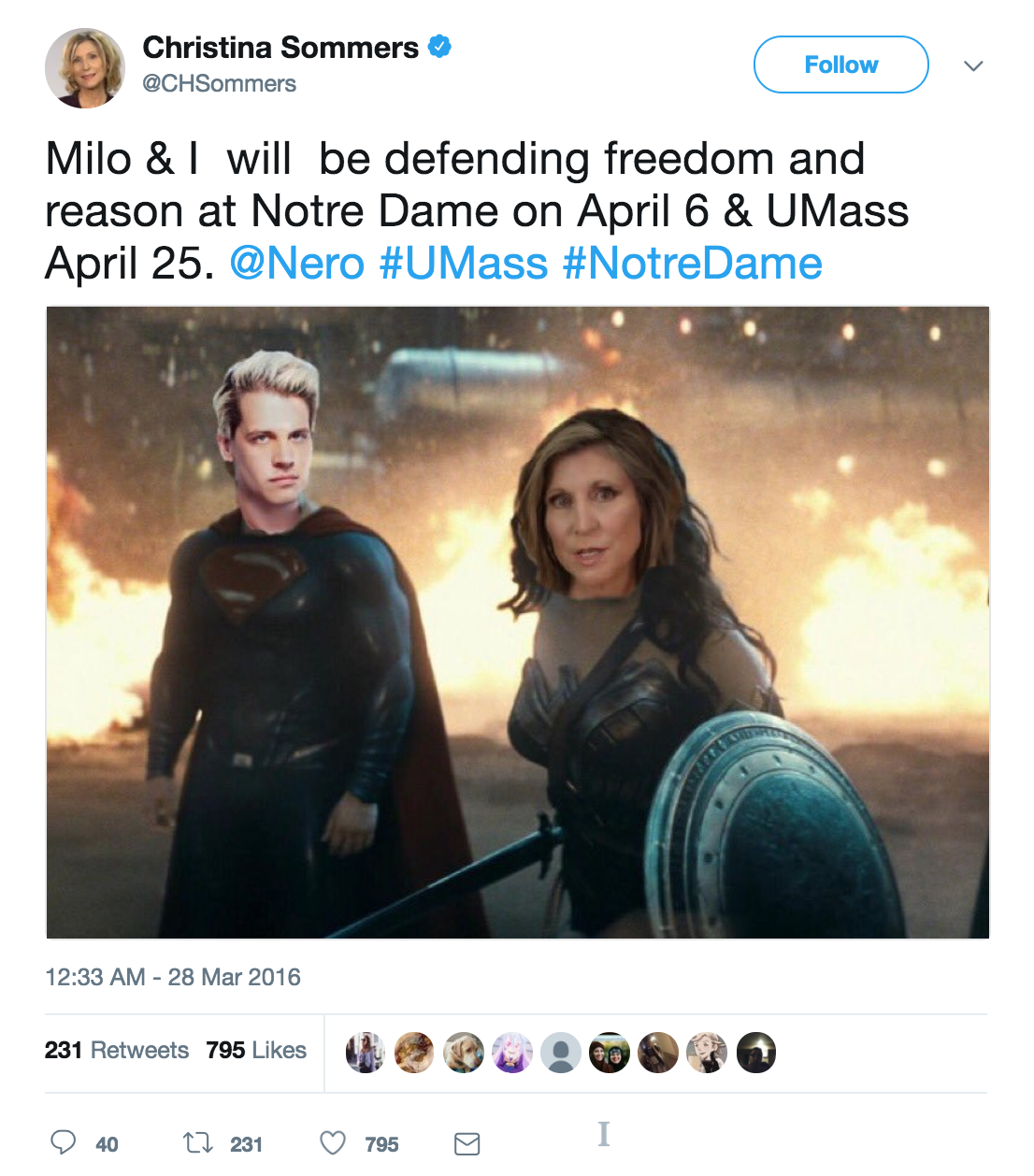 Worth mentioning, too, was Sommers’ 2016 appearance on a white nationalist podcast. In January of that year, she appeared on Red Ice’s Radio 3Fourteen with Lana Lokteff, whose white supremacist and antisemitic views were not secret and indeed broadcast from her Twitter account (here's what Lokteff was tweeting the month before Sommers' interview was published). In an example of extreme mission creep, Sommers joined the show to deny the existence of a gender wage gap. (Sommers has since clarified that she did not know about the Red Ice show before going on it.)

But going back to the profile of Male Supremacy. The SPLC profile reads:

Men’s rights issues also overlap with the rhetoric of equity feminists like Christina Hoff Sommers, who give a mainstream and respectable face to some MRA [Men’s Rights Activism] concerns.

Carl Benjamin, also known as Sargon of Akkad, was instrumental in the earliest days of Gamergate and has recently come under fire from YouTube, where he has hundreds of thousands of followers.

In 2014, Benjamin launched a crowdfunding campaign for a documentary about Gamergate. In his fundraising campaign he was quite successful, according to the page, raising $7,000 a month from 3,298 donors. The pitch to funders read:

﻿Dear Based Mom" asking Christina Hoff Sommers to be the person to do a documentary on Gamergate on behalf of Canadian MRA Davis Aurini: "Professor Sommers, I want to propose that they need you I think that you are absolutely the perfect person to present and represent this documentary. this might come as a bit of a shock to you but you are quantifiably the single most influential figure in all of Gamergate. you have the most reach. You have the most influence. The romans would call this auctoritas.

The SPLC did not label Sommers an extremist. And claiming that the SPLC “blacklisted” her, for accurately describing her relationship to a subculture and political movement, is almost as extreme an exaggeration as the student protestors at Lewis & Clark who called her a fascist. But Sommers needs to square her objection to the SPLC’s profile with the praise she’s received for her advocacy on issues that concern MRAs. The record is extensive.