The legendary Coco Palms Resort in Kauai, Hawaii, where Elvis Presley’s film Blue Hawaii was filmed in 1961, became a battleground between developers who plan to revive the once neglected resort and Hawaiian activists who are attempting to save the land for native use.

What began as a legitimate dispute over Native Hawaiian sovereignty and property has devolved as activists resort to sovereign citizen tactics in a desperate effort to prevail. 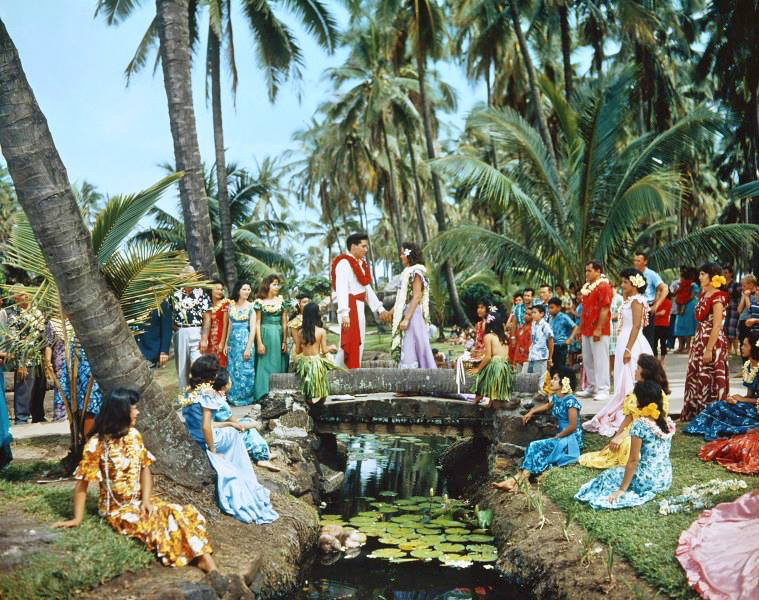 Elvis Presley's Blue Hawaii was filmed at Coco Palms in 1961.

As the plan was made public, student and Hawaiian local Noa Mau-Espirito asserted his genealogical connection to the Kingdom of Hawaii and claimed that his cousin Kamu Hepa is a descendant of Deborah Kapule, the last Queen of Kauai. Kapule once owned the land that the Coco Palms sits on, and Mau-Espirito and Hepa say they have a found a royal patent that deeds them as the descendants of the land.

When the developers did not hand the $135 million Coco Palms project over to the two Hawaiians, Mau-Espirito chose to exercise what he believed to be his right to the territory in 2016 by occupying it, changing the locks and calling himself the Konohiki, (landlord). He also invited others to join him, and a steady stream of guests, many of them homeless, arrived at the property to protest with him. They gardened native plants, took care of a pond which is said to contain Hawaiian ducks called Koloa, farmed animals and took care of a nearby burial ground.

Unsurprisingly, the developers went to court.

The two sides went in front of a judge in December 2017 and January 2018. Mau-Espirito gave a spirited defense, but much of it was mired in talk typically heard from sovereign citizens. “I am a Hawaiian subject, a citizen of the Hawaiian kingdom,” he told the court. “Your honor,” he continued, “I am not part of the U.S. nation. This court has no jurisdiction over me your honor.” He mentioned the courtroom’s flag stating, “That flag is the law of the sea, please uphold the laws of the land, the Hawaiian laws your honor.” He also told the court that they were not a de jure government, but rather “defacto” and “fake.”

Judge Soong found that Greene and Waters’ Specialty Warranty Deed to the Coco Palms property, as well as their title which was recorded with the State of Hawaii, established their right to possess the land. In his decision, Soong stated that the defendants’established rights as Native Hawaiians did not include the right to permanently occupy the plaintiff’s property and the defendants had an obligation to leave it.

The judge ordered Mau-Espirito, Hepa and their supporters to remove themselves from the Coco Palms property on or before 6 p.m. on January 28, 2018.

On the day mandated for ejection, it is reported that between 80 and 200 people showed up to protest, but no one arrived to enforce the order. It wasn’t until February 23 that authorities came to formally remove the activists staying at Coco Palms. One person was arrested for trespassing and the rest left of their own free will.

By this point, Mau-Espirito had become convinced that “The whole system is conspiring — judges, police, developers, politicians — to remove us from our land.” Taking his mistrust for the Hawaiian government to the extreme, he participated in a fake court calling for the arrest of Judge Soong.

The bogus court is called the Court of the Sovereign, and its Chief Justice Moses Enoka Heanu is a sex offender. On January 26, a document signed by Heanu and filed with “The Hawaiian Judiciary, Court of the Sovereign” charged Soong with contempt of court and obstructing and perverting the course of justice. It called for his surrender within 48 hours and stated that “Failure to surrender will render an immediate Arrest and Detain Warrant under flight from prosecution [sic].”

Needless to say, the baseless document did not provoke Soong’s surrender, but the activists were undeterred and following the advice of supporters, filed a Notice to Pay or Quit in the Court of the Sovereign on March 6. This notice asserted that the mayor of Kauai, Department of Land and Natural Resources staff, two title companies, lawyers for Coco Palms Hui LLC and others were squatters in the Puna District of Kauai and had five days to pay $200 million or leave the land and “deliver up the possession of the premises.”

This caused the County of Kauai to step in. They sent a letter to Mau-Espirito and Hepa to let them know that they wouldn’t be paying or leaving, and that the county did not recognize The Hawaiian Judiciary Court of the Sovereign as legitimate. They also explained that there was never a court by that name during the tenure of the Kingdom of Hawaii.

The county also worked to educate others in the state about this turn of events and the sovereign citizen activities behind them. In a memo, County Attorney Mauna Kea Trask, who is Native Hawaiian himself, wrote “The legal situation regarding Native Hawaiian sovereignty and self-determination is very complex and while Hawaiian people do enjoy certain state and federal constitutional rights and entitlements separate from the non-native population they must as a political group nonetheless comply with county, state and federal laws like everyone else.”

According to reports, this is not the first time Hepa and Mau-Espirito have resorted to sovereign tactics. In April 2017, they used similar methods in a disagreement over a home on Kauai’s North Shore.

These acts may have harmed the legitimacy of their own campaign, as well as other Hawaiian sovereignty claims. Hawaiian Ian Lind states that “Such filings undercut their publicly stated position that they have a valid legal claim to the property and, what’s worse, encourage the public to see all Hawaiian land claims as similarly bogus.”

Bill Fernandez, vice president of the Native Hawaiian Chamber of Commerce took this a step further; voicing his concern that it could hurt all Hawaiians. As he told a writer at Honolulu Civil Beat “These young men have made the claim in court that all of Wailua really belongs to them. It’s not just an idle statement. We’re talking about land issues that have been settled at least a century ago to allow people to build things like homes and hotels. I’m very distressed that they are making Hawaiians look like a group of people who will not obey the law.”

Even Coco Palms developer Chad Waters is worried about the fallout from the activists’ tactics, which he believes is the result of people influencing Mau-Espirito and Hepa. “It is unfortunate” he told the Southern Poverty Law Center “that the repercussions of the occupation of the Coco Palms property are going to fall on the foot soldiers of the Sovereign Hawaiian movement and not the ones that put them up to it.”