This past Saturday a South Dakota state Senator and congressional candidate was recorded saying that a terrorist attack in the United States could help his campaign in the upcoming June primary.

In the recording, Senator Neal Tapio said, “And then all that has to happen is that there will be one more terrorist attack between now and then and I will be the … just by the ‘Trump effect,’ I will be the candidate. That’s the way I look at it.”

Tapio responded with a public Facebook rant in which he asserted that Islam at its core is responsible for Al-Qaeda and ISIS-associated attacks around the world, saying, “Where the hell do you think this hateful and deadly ideology comes from? Does it come simply by accident? Or from a few extremists who ‘misinterpret’ the true Islam? Give me a break.”

Tapio also disagreed with George W. Bush, Barack Obama, Hillary Clinton, John McCain and “even the Pope that Islam is a ‘religion of peace,’ and that ‘terror has nothing to do with Islam.’” He later went on to assert himself as an “expert” in Islam, claiming, “I’ve read the Koran twice.”

Multiple screengrabs of his Facebook post also show his account “liking” several blatantly anti-Islam comments, including one that says “What many don’t realize is the Islam [sic] is not a religion, it is a theocracy.” 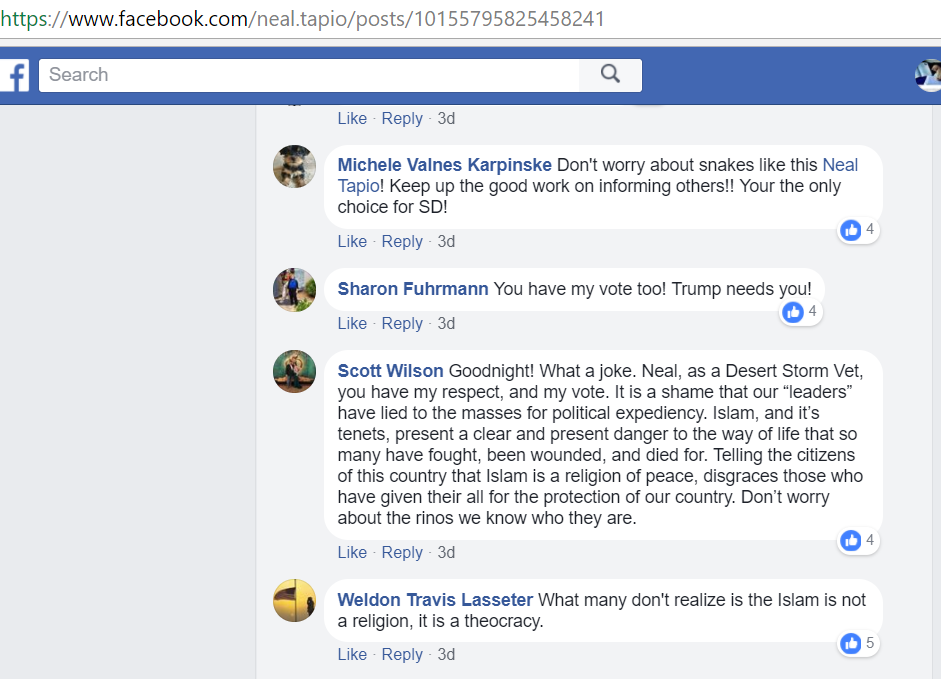 Another comment, also liked by Tapio’s account, reads “Islam, and it’s [sic] tenets, present a clear and present danger to the way of life that so many have fought, been wounded, and died for. Telling the citizens of this country that Islam is a religion of peace, disgraces those who have given their all for the protection of country.”

Tapio’s anti-Muslim vitriol is hardly a one-off for him. Earlier this year he gained media attention for attacking a delegation of multi-faith leaders visiting the South Dakota state legislature. Echoing the paranoid style of 1950s McCarthyite rhetoric, Tapio claimed, “Interfaith dialogue is a part of a war, it’s a silent part, it’s a part of a way of taking away the Christian fabric of our nation.”

His legislative activity has largely matched his colorful rhetoric. In 2018, Tapio was the prime sponsor of five legislative proposals, two of which were anti-Muslim and anti-immigrant:

Both proposals failed to pass.

Also in 2017, Tapio issued a press release calling on political rival Shantel Krebs to state whether or not she agreed with Trump’s proposed “Muslim registry,” and tacitly endorsed the proposal himself. (In response, Krebs affirmed that she did support the idea of a national Muslim registry.)

Tapio’s unguarded thoughts about terrorism and his congressional candidacy appear to be consistent with research on anti-Muslim hate in America. An empirical analysis by Dalia Mogahed, a polling expert and current research director for the Institute for Social Policy and Understanding, shows that spikes in anti-Muslim attitudes are associated with the run-up to election cycles. According to her analysis, this suggests that politicians’ exploitation of social fears, not simply violence committed in the name of Islam, is driving anti-Muslim attitudes.

In response to Tapio’s remarks, South Dakota Voices for Justice, a local pro-pluralism advocacy organization, stated, “Tapio’s statements expose him for what he is: a hateful fear monger who is less interested in protecting citizens and more interested in hateful rhetoric that he thinks will propel him into office.”