The Family Research Council* (FRC) will be on a tour of Israel (April 17 through 27), in which attendees will join FRC president Tony Perkins and other FRC representatives to “walk the ancient paths” and meet Israeli leaders.

Other guests of the tour include former congresswoman Michele Bachmann; Avi Melamed, the Salisbury Fellow of Intelligence and Middle East Affairs for the Eisenhower Institute; Rabbi Yehuda Glick, a member of the Knesset; and Ambassador David Friedman, who is serving as Ambassador Extraordinary and Plenipotentiary to the State of Israel.

An FRC video advertising the tour comments that attendees will hear from Israeli religious and “political defense” leaders, while an email FRC sent out January 5 notes that “rocket scientist” Ari Sacher will be joining the tour and will brief attendees on the so-called “Iron Dome,” a missile defense system developed by Rafael Advanced Defense Systems. Sacher, according to his bio at the tour site, is an Iron Dome Systems Engineer.

On April 17, FRC will host  the panel event “Losing Our Voices: Who Owns Free Speech on the Internet”:

In an era when 69% of American adults use social media platforms to express themselves, the free market powers of digital giants like Facebook, Google, and Twitter have collided with the free speech rights of citizen internet users. In the wake of a consistent pattern of censorship by tech companies of lawful but politically incorrect viewpoints — particularly those of conservatives and Christians — what is the legal status of digital free expression?

The Family Policy Institute of Washington (FPIW; located in Bellevue, Washington) is hosting its annual dinner May 4 with guest speaker Robert George, Princeton professor of law and longtime anti-LGBT activist.

George is chairman emeritus of anti-LGBT group the National Organization for Marriage and is also one of the three drafters of the anti-choice and anti-LGBT “Manhattan Declaration,” a theocratic manifesto that calls for Christians to disobey laws they disagree with, seeks to ban same-sex marriage and disallows recognition of any kind of civil union between same-sex couples.

George, who served as chairman of the U.S. Commission on International Religious Freedom, is a senior fellow at the Witherspoon Institute, which provided nearly $700,000 to anti-LGBT sociology professor Mark Regnerus for his debunked 2012 study. In addition, George launched the American Principles Project (APP) in 2009, a group that had been working hard to derail the Common Core educational standards, including using conspiratorial turns such as warning about “dark forces” behind the standards. He has also referred to transgender identity as “absurd” and “superstitious.”

FPIW is extremely active in anti-choice and anti-LGBT state and local politics. It has battled domestic partnerships, access to birth control for poor women and a telemedicine bill, claiming that it would allow “webcam abortions.” FPIW president Joseph Backholm has compared same-sex marriage to two siblings re-defining their bond and said that “tolerance is not something to be pursued.”

FPIW is also behind the anti-trans “Just Want Privacy” campaign, which was gathering signatures in 2016 for Initiative 1515. The initiative would have repealed a state human rights commission law and made it legal for businesses to discriminate against trans people by allowing them to refuse to allow trans people to use the restrooms and locker rooms in accordance with their gender identity. The measure didn’t make the ballot.

Focus on the Family

Focus on the Family (FOTF) has apparently quietly ended its annual Day of Dialogue, an event that was specifically formed to combat the annual Day of Silence, a student-led national event in April in which people take a vow of silence to bring attention to silencing and erasure of LGBTQ people at school.

Blogger Hemant Mehta noticed the end of the Day of Dialogue and wrote about it. The Day of Dialogue was designed for Christian students to proselytize to their LGBTQ classmates about why homosexuality/being transgender is against God’s will (and is thus “bad”).

With regard to the end of the annual event, the FOTF website claims that

[I]n an effort to better serve and empower participants—and continue the initiative’s growth—we will be leaving it open for individual students to choose the date that works best for them for organizing a Day of Dialogue in their individual schools. The free speech tools and guides remain available on the Day of Dialogue website, but students will have flexibility on determining which specific day during the school year to use them and to lead activities.

The Day of Dialogue was initially founded in 2005 by Alliance Defending Freedom* (ADF; then known as Alliance Defense Fund) as “Day of Truth,” a “counter, or Christian perspective” to the Day of Silence. ADF has worked domestically to create and implement state-level religious exemption laws that allow people to legally discriminate against LGBT people in accordance with religious beliefs. The organization has also worked to implement public school policies that further marginalize LGBT students, most notably transgender students. ADF has also worked internationally to criminalize sex between people of the same sex.

Janet Boynes of the ex-gay Janet Boynes Ministries (JBM), will be headed to Nigeria April 27 through May 8, according to an email JBM sent out March 20. Boynes will be visiting the David Christian Centre, located in Lagos. The email requested prayers as Boynes “continues to minister for the Glory of God in Nigeria.”

Boynes claims to be an “ex-lesbian” and is touted by anti-LGBT people as “proof” that LGBT people can “be straight.” Boynes has likened homosexuality to drug addiction and pointed to a variety of causes for it, from domineering mothers to having too many gay friends. She has also claimed that acceptance of same-sex marriage is a sign of the end times and recommended that parents not allow same-sex partners of their LGBT adult children into their houses.

Pete truly understands this larger battle in a fundamental way that 95% of today’s pro-family leaders and activists simply haven’t grasped. The power of truth and not backing down – fearlessness – is so fundamental. I can’t overstate how important that is when confronting the vicious and militant LGBT movement infiltrating our schools and society.

LaBarbera is president of Americans for Truth about Homosexuality* (AFTAH), but has served as an editor and reporter for several right-wing outlets prior to that, including Human Events, Accuracy in Media and the Washington Times during the 1980s and early 1990s.

He then served a stint with Concerned Women for America before launching his own anti-LGBT quarterly paper in 1993, the deceptively named Lambda Report, in which he documented what MR calls the “growing homosexual activist movement across the country.” LaBarbera linked homosexuality to pedophilia in the paper, which ran for five years. 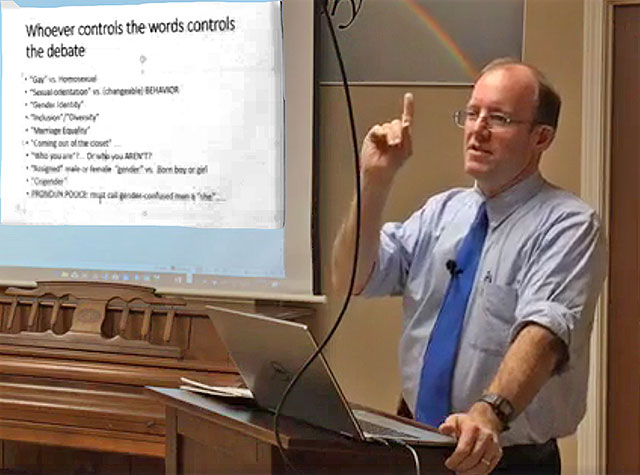 In the late ’90s, LaBarbera ended up at FRC for a while, working with fellow anti-LGBT activist Robert Knight, and also started writing for the conspiracy-laden WND (formerly World Net Daily), something he still does.

In the early 2000s, LaBarbera moved back to Chicago where he was executive director of the Illinois Family Institute* until 2006. Since then, he has focused on AFTAH, where he continues to push the conspiracy theory of a “homosexual agenda.” He also links homosexuality to pedophilia and other ills, something Camenker and MR do, as well, made most obvious in a book the group published last year called The Health Hazards of Homosexuality, which also links homosexuality to violence and disease.

According to the MR post, AFTAH will “continue to post high-quality material on the LGBT issue, while working more closely with MassResistance.”

Voters in Anchorage, Alaska, defeated an anti-trans ballot initiative that would have repealed protections for transgender people, including allowing them access to public restrooms and other facilities in accordance with their gender identities. Opposition to the measure garnered 52.7 percent of the vote while support for it finished at 47.3 percent.

Proposition 1 would have required people to use such facilities based on the sex they were assigned at birth, and it was heavily promoted and supported by the anti-LGBT Alaska Family Council.

The election, which will be officially certified April 17, marks the first time an American jurisdiction has upheld protections for transgender people as part of a standalone ballot measure. There are just under 300,000 people in Anchorage, which makes it one of the largest jurisdictions in the country to approve such measures.

Republican legislator Leslie Osborn added an amendment to the bill that stipulates if an agency is not receiving federal or state funds, it can do whatever it wants, but if the agency discriminates, it will lose that funding.

The amendment passed the committee, too, and will also be voted on in the Oklahoma House.

The Maine House passed a conversion therapy ban (also known as ex-gay or reparative therapy) April 12 amid heated debate. The bill would ban state-licensed therapists from engaging in efforts to change the gender identity or dissuade same-sex orientation in clients under the age of 18.

Conversion, or reparative therapy, is the discredited and pseudoscientific belief that gay people can be made heterosexual or that trans people can be counseled or treated out of being trans.

Detractors argued that the ban would compromise “parental rights” and the work of faith-based counselors, though the bill exempts pastoral counseling from the ban. Maine state representative Roger Reed (R) claimed that the bill “is an attempt by the LGBT community to legitimize the unnatural inclinations.”

ThinkProgress noted on April 12 that new language is circulating on the anti-LGBT right regarding the latest wave of conversion therapy bans working their way through state legislatures. Now, anti-LGBT activists are referring to the bans as “must stay gay” bills and thus must be opposed.

In an April 11 press release, Regina Griggs, director of “ex-gay” group Parents and Friends of Ex-Gays (PFOX), called on legislators to oppose “Must Stay Gay” bills that, “This compulsory homosexuality and transgenderism [sic] is the worst infringement on people’s rights since Jim Crow.” She went on to cite pseudoscientific statistics from the fringe medical organization American College of Pediatricians*.

Griggs does not explain in the press release how banning a harmful practice is comparable to society-wide segregation on the basis of race.

ThinkProgress also noted that the “Must Stay Gay” framing appears to have originated with prominent anti-LGBT writer and commentator Michael Brown, of the Fire School of Ministry in North Carolina, who began garnering media attention a few years ago because of his protests of Charlotte Pride events. Since then, he has written several books that include his belief that a “gay agenda” is taking over America.

On April 5, Brown posted an essay lambasting a current conversion therapy bill in California, titled “California’s Shocking ‘You Must Stay Gay’ Bill.” In the essay, he claimed

…this California assault on our most fundamental freedoms is simply the latest manifestation of LGBT activism. As I and others have warned incessantly for many years, those who came out of the closet want to put us in the closet. Do you believe me now?

He also spoke about “thousands” of people who have “left” homosexuality, including anti-LGBT ex-gay activist Anne Paulk, who appeared on Brown’s radio show. Brown did not mention that Paulk was formerly married to fellow ex-gay activist John Paulk, who in 2013 rebuked the ex-gay movement and issued a formal apology, noting that it did not change his sexual orientation. In 2014, he began living openly as a gay man.