Those are two key findings from a report revealing the latest poll results obtained by the Institute for Social Policy and Understanding (ISPU), a Washington, D.C., think tank.

This year’s poll also introduces the Islamophobia Index developed in collaboration with Georgetown University’s Bridge Initiative, which is described as, “an additive scale ranging from 0 to 100 that measures anti-Muslim prejudice in America (with 0 as the lowest level of prejudice and 100 as the highest.)”

A total of 2,481 mostly-randomized interviews were conducted across Muslim, Jewish, Protestant, Catholic and religiously non-affiliated individuals. The interviews were mostly conducted via landline and mobile phones, with some Muslim respondents, drawn from a non-probability panel, being interviewed via the internet.

ISPU’s survey found that American Muslims’ optimism about the country’s direction had steadily and precipitously dropped from previous years. In ISPU’s 2016 poll, 63 percent of American Muslims said they were satisfied with America’s direction, which dropped to 41 percent in last year’s findings, and now stands at 27 percent.

Despite the severe dissatisfaction with the nation’s trajectory and an even lower approval rating of President Trump’s performance in office (13 percent), American Muslims are increasingly mobilizing themselves into political action. Seventy-five percent of this year’s Muslim respondents said they were registered to vote, which is an increase of 7 percent from last year and 15 percent since 2016. 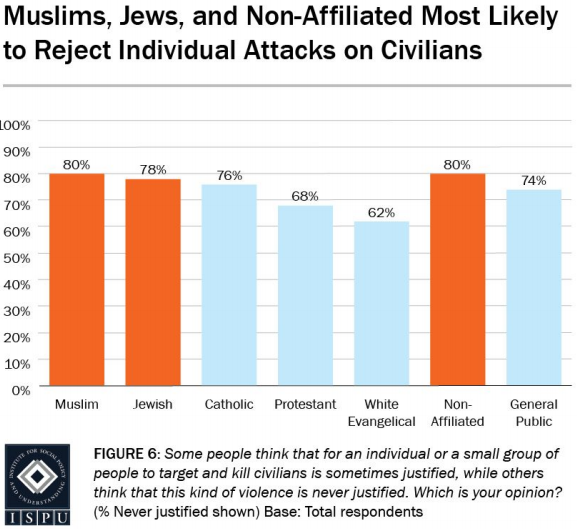 U.S. public attitudes toward the rights of Muslim citizens

Prior polling has identified a “Trump effect” on the broader public’s attitudes toward American Muslims, largely along partisan lines. Those identifying as politically liberal and independents have reported majority favorable views toward Islam and Muslims, whereas those identifying as politically conservative have reported majority negative views of Islam and Muslims.

ISPU’s research focused on the extent to which the broader American public is equally supportive of Muslims’ rights as their fellow citizens. The ISPU survey’s findings remain broadly consistent with earlier polling and suggest that Americans as a whole have continued to reject prejudice in favor of supporting pluralism.

For example, in response to the statement, “The negative things politicians say regarding Muslims is harmful to our country” 66 percent of the general American public agreed. 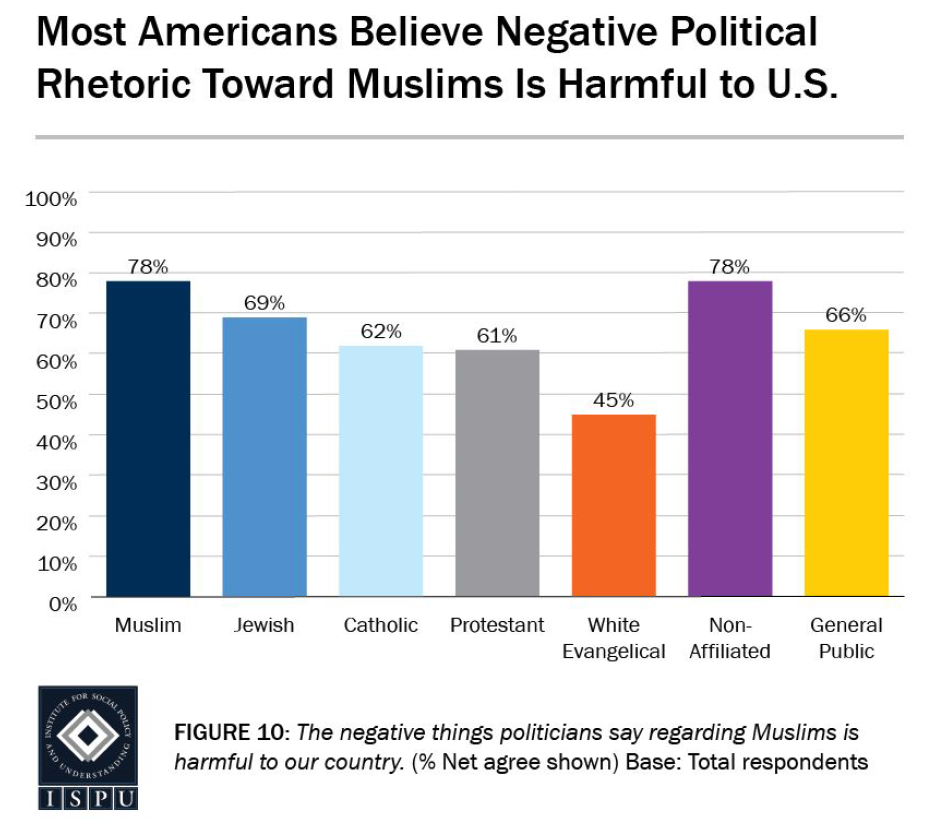 The same percentage of the general American public also said they opposed a “Muslim Ban” that would in effect prevent individuals of the Islamic faith from entering the United States. 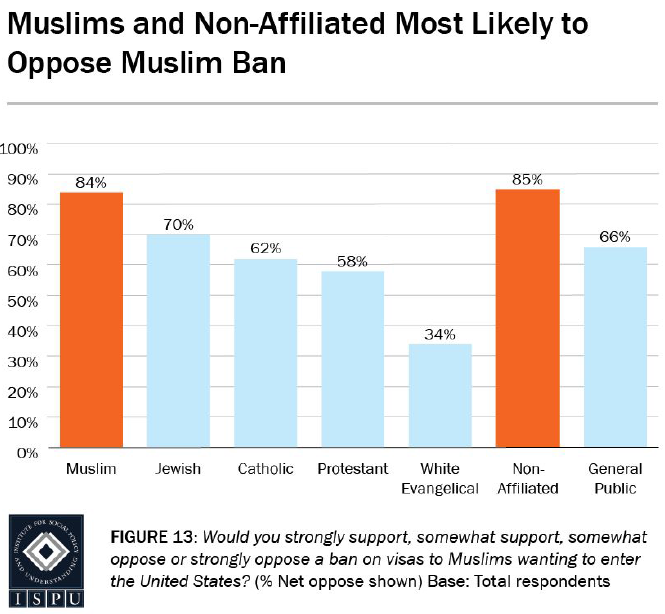 The category that registered the least amount of support for Muslims’ rights were individuals who identified as white evangelical Protestants. A similar result was found when asking whether or not respondents believed Muslims were committed to the well-being of America. Only 36 percent of white evangelicals affirmed that belief. 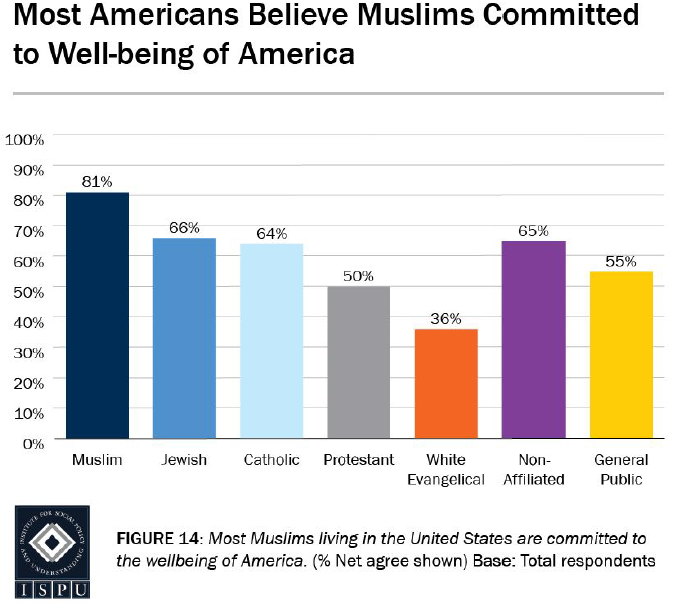 These results are consistent with prior years of polling that surveyed the opinions of U.S. white evangelicals on Islam and Muslims.

The impacts of anti-Muslim prejudice

This year’s poll also contains a new addition — the Islamophobia Index. The Index measures the extent to which individuals endorse or reject anti-Muslim stereotypes, dehumanizing narratives and attitudes about whether or not Muslims are collectively responsible (at least partially to blame) for violence committed by individuals who identify as part of their faith.

Its construction is based on psycho-social research insights from scholars such as Nour Kteily and Emile Bruneau, whose most recent works have analyzed the real world impacts of stereotypes, dehumanization and collective blame cast upon minority groups, including Muslims.

The report finds that individuals who hold strong anti-Muslim prejudices, as measured by the Index, tend to be more approving of discriminatory policies targeting Muslims, more likely to support state and non-state violence against civilians and more likely to favor authoritarian measures a response to perceived security threats.

Hatewatch spoke to Dalia Mogahed, ISPU’s director of research and a co-author of the report.

Mogahed emphasized that — despite being a minority opinion as indicated by the poll —anti-Muslim prejudice is connected to views that challenge fundamental democratic norms and values. Noting the association between anti-Muslim prejudice and pro-authoritarian attitudes, she warned that such hate isn’t just a threat to one group of people, “it is a threat to all.”

The full report, including methodology, can be accessed here.

Full Disclosure: This article’s author worked for ISPU in 2014.