“PRO-ISLAMOPHOBIA SAVES LIVES!!” one anti-Muslim Facebook group reads. Its cover photo is an image of a charred, blackened body.

According to Facebook’s Community Standards, posts depicting “ charred or burning people ” are prohibited. However, after an academic researcher flagged the group, an automated response was generated and provided to Hatewatch: “We looked over the group you reported and though it doesn’t go against one of our specific Community Standards, we understand that the group or something shared in it may still be offensive to you.” 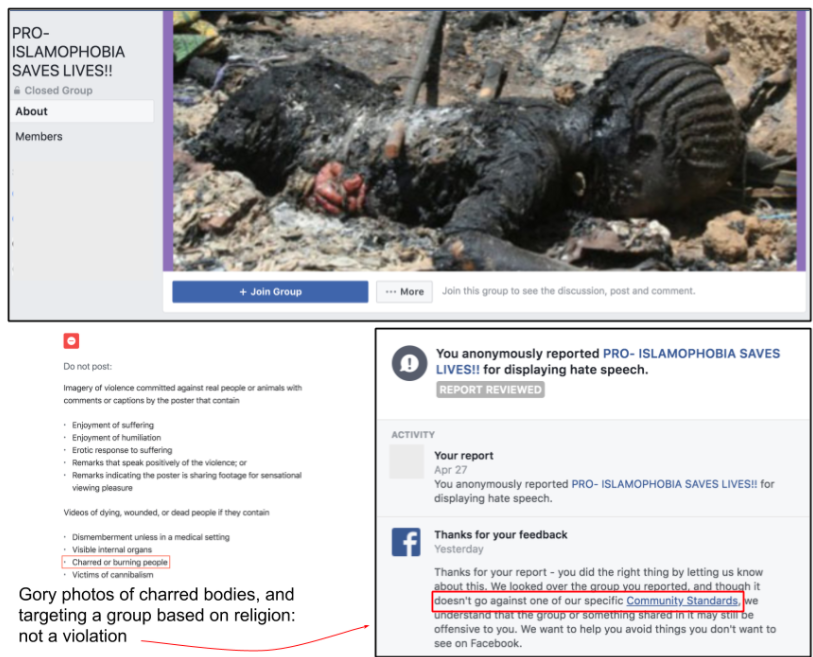 In early April, the Southern Poverty Law Center (SPLC) identified 33 anti-Muslim Facebook groups that use violent imagery, including weapons, in their cover photos. Twenty of these groups promote the stereotype that all Muslims are violent. One group, “Islam unveiled,” has an image of an ISIS fighter executing prisoners lying prone in a shallow grave. The picture is accompanied by a quote accredited to “Muhammad, Prophet of Islam,” which says, “Killing Unbelievers is a SMALL MATTER to us.” 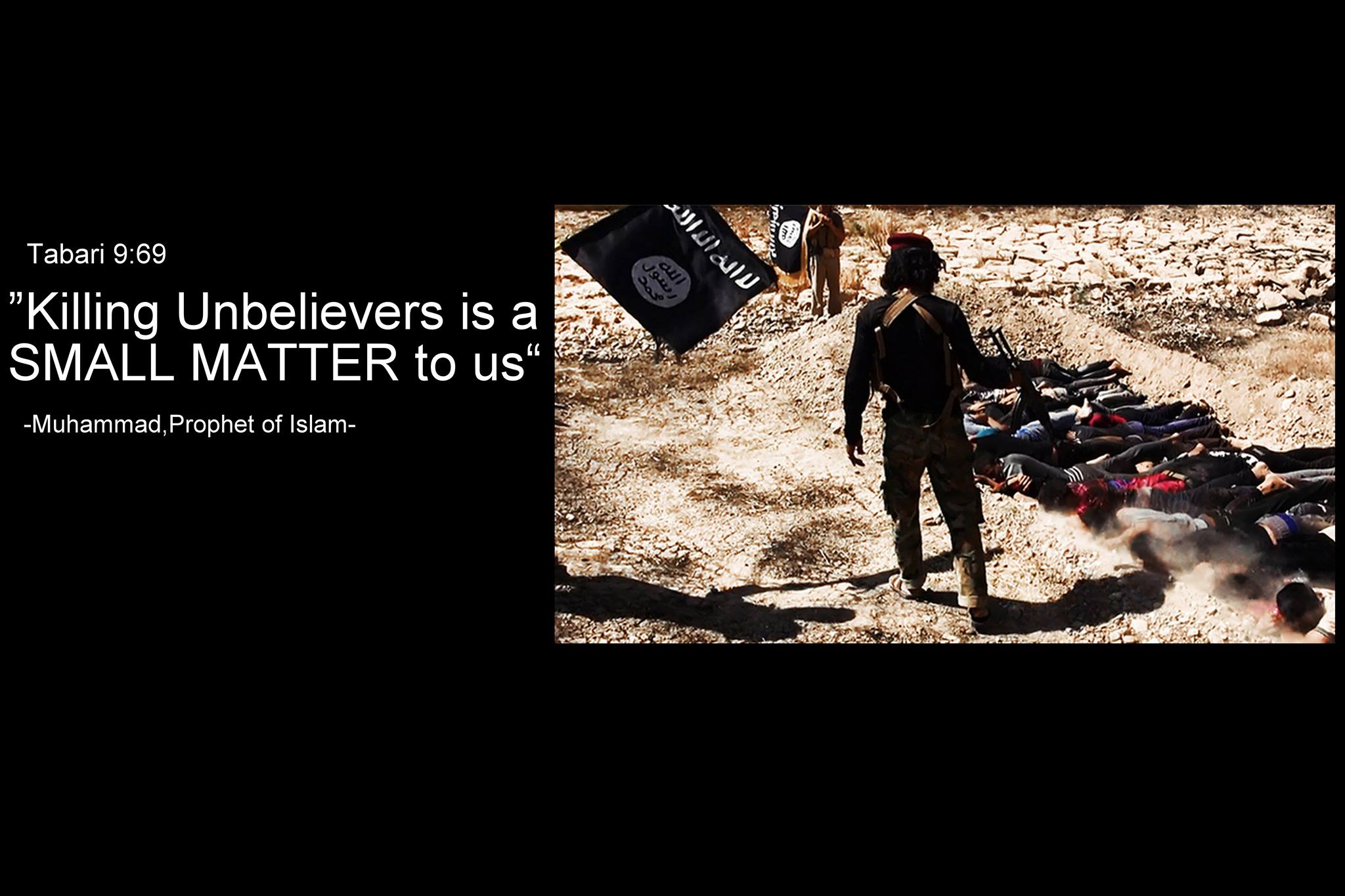 Another group, “American Infidels Against Islam Brotherhood,” shows a fighter jet dropping bombs with the caption “Islam is the cancer.” And yet another group “CRUSADERS AGAINST THE THREAT OF ISLAMIZATION AND SHARIA LAW” has a cover photo which says “foolish infidels coexist” with part of a quote from the Quran, “seize them and slay them wherever you find them.”

“Infidels United for Truth,” has also apparently snuck past Facebook’s community standards check. “This group is for the education and sharing of information globally about the dangers of Radical Terrorism and how it is affecting all of the world. All true Patriots, 111%'s, Preppers, Militia, Constitutionalists, are welcome. Gun porn and 2nd Amendment rights are encouraged, in fact, anything that ties in to our way of life may be posted here…” the group description reads. The Three Percenters are an antigovernment extremist movement. The same Facebook group asks, “Are Muslims taking over the world?” and “Is Islam a peaceful “religion”?” before admitting members.

Researcher and professor of computer science at Elon University, Megan Squire, is conducting a large-scale, ongoing study of hate groups on social media platforms, including Facebook.

“Preliminary results from my research indicate that – not surprisingly – groups with broadly ‘nativist’ ideologies, including anti-Muslim and anti-immigrant views, have significant membership in common,” Squire said.

“But this social network analysis also shows that anti-Muslim ideologies in particular can serve as a bridge between mostly disconnected communities, such as between anti-government and white nationalist communities.”

To construct the graph below, Squire first classified Facebook groups into ideologies using SPLC's descriptions. She then selected the groups having more than 10 members in common and used social network analysis software to reveal the underlying "co-membership" network. 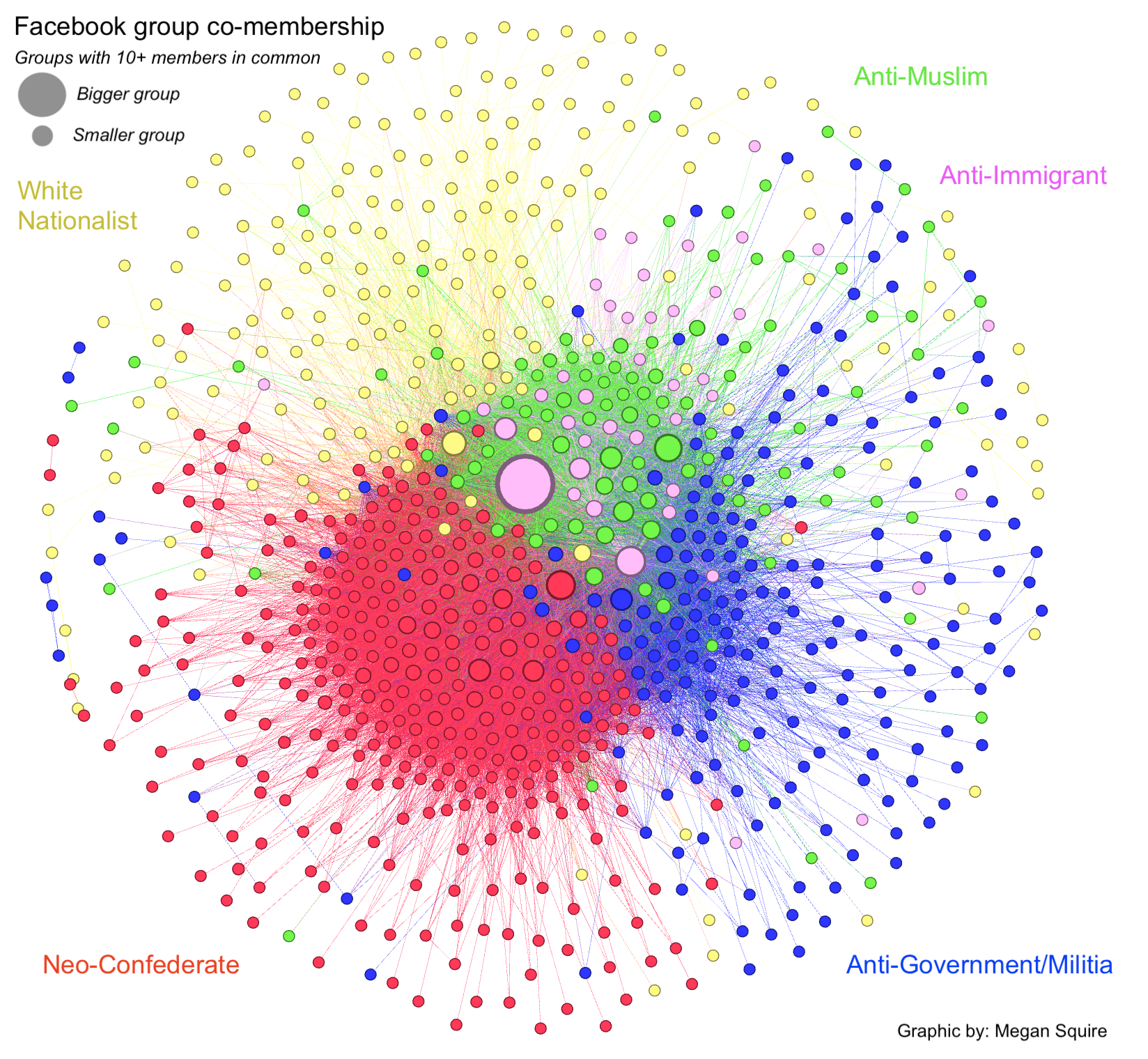 Each node represents one Facebook group. Lines between the groups indicate that the groups have at least ten members in common. Groups are positioned on the graph according to how similar their membership is. Groups that are closer to the center have more in common with one another. Green nodes, representing anti-Muslim groups, can be seen throughout.

Anti-Muslim hate seems to be the unifying cause hate groups can rally around and engage in on the social media platform. These findings are part of her ongoing research project to study far-right extremist beliefs through social media.

According to a 2017 Pew research study, 75 percent of Muslims polled believe there is a lot of discrimination in the United States against Muslims. Americans polled that same year by Pew rated Muslims on a “feeling thermometer” where 0 is the coldest and 100 is the warmest, the lowest among all religions at just 48. This disposition is well illustrated on Facebook, a platform in which Nazis and white nationalists are removed, while anti-Muslim groups remain.

Many publications have highlighted the double standards that exist in policing various demographics. Like other tech companies, Facebook largely responds when there is a controversy that is reported on by a publication. ProPublica points to complaints made by many users and the Anti-Defamation League about a page called “Jewish Ritual Murder,” which Facebook didn’t respond to until ProPublica wrote about Facebook's inaction.

Monica Bickert, who leads the global policy management team at Facebook, explained, “The policies do not always lead to perfect outcomes. That is the reality of having policies that apply to a global community where people around the world are going to have very different ideas about what is OK to share.”

On May 2, Axios reported that former Senator Jon Kyl (R-Arizona) will lead an investigation on conservative bias on the platform. Not only have claims of anti-conservative bias been discredited by Facebook’s data, but Kyl also has history of indulging anti-Muslim rhetoric. In 2009, he hosted a screening of Fitna, a film which shows verses of the Quran with “graphic footage of atrocities committed by radical Muslims," and invited the film's creator, the far-right Dutch lawmaker Geert Wilders, to the U.S. Capitol. Earlier that year Wilders was banned from Britain out of concern that his anti-Muslim views would incite violence. In 2011, Kyl said he was "a bit perplexed by the focus” of the first ever Congressional hearing on the rights of American Muslims.

Harmful and hateful rhetoric on Facebook is not without consequence. A study published in February 2018 by the University of Warwick in Germany found a direct correlation between hateful rhetoric against refugees on the Facebook page of the right-wing party Alternative für Deutschland and incidents against refugees. They further found that during times of country-wide Facebook outages, the “effect of refugee posts on hate crimes vanishes” within weeks. “Our results suggest that social media can act as a propagation mechanism between online hate speech and real-life incidents,” they concluded.

According to the FBI, hate crimes against the American Muslim community doubled in the last two years. In March, Chad Horsley, a former Marine, drove his truck into a store in Livingston, Louisiana, because he thought it was owned by Muslims. In April, three Kansas militia members who called themselves the “Crusaders” were found guilty in a plot to bomb and kill Somali Muslims.

Meanwhile, the very top of the United States government is awash in anti-Muslim connections. Senior Advisor to the President Stephen Miller , former White House Chief Strategist Steve Bannon , Attorney General Jeff Sessions and the recently confirmed Secretary of State Mike Pompeo all have extensive ties to organized anti-Muslim hate groups. Then there’s the president himself and one of his earliest executive orders inspired by these groups: the Muslim Ban .

While Facebook has made strides in removing hateful content, with anti-Muslim hate, it faces a challenge that infects all of American society. In the end, the company will have to decide what it values most. Today, anti-Muslim content finds a home on Facebook.