​Phyllis Hunter recalls exactly where she stood when the neo-Nazis came to Charlottesville. And she’s still angry about what they did to her city.

“Mondays used to be my best days,” said Hunter, who runs the Spice Diva store near downtown. “We got so many tourists. That has all but stopped.”

Nearly a year after the white supremacist Unite the Right rally turned violent and deadly in central Virginia, some people are still physically recovering from the attacks that took place, while the physical scars on the streets are few.

But the city of 46,000 people, home to Founding Fathers Thomas Jefferson and James Monroe, is still struggling with the after effects of Unite the Right.

“The city has expended quite a bit of energy and effort to get back to business as usual,” said Charlottesville resident and activist Emily Gorcenski. “But there’s still a pall over the city, like a bad smell you can’t quite place.”

When large numbers of white supremacist descended on the college town in the central part of the state on Aug. 12, 2017, no one was quite sure what to expect.

Local police gave businesses a couple of briefings and a few warnings about potential problems, but few say they had any idea about what was about to hit town.

The violence that surrounded Unite the Right resulted in three deaths – two police officers and Heather Heyer, a counterprotester hit by car driven by an alt-right adherent. 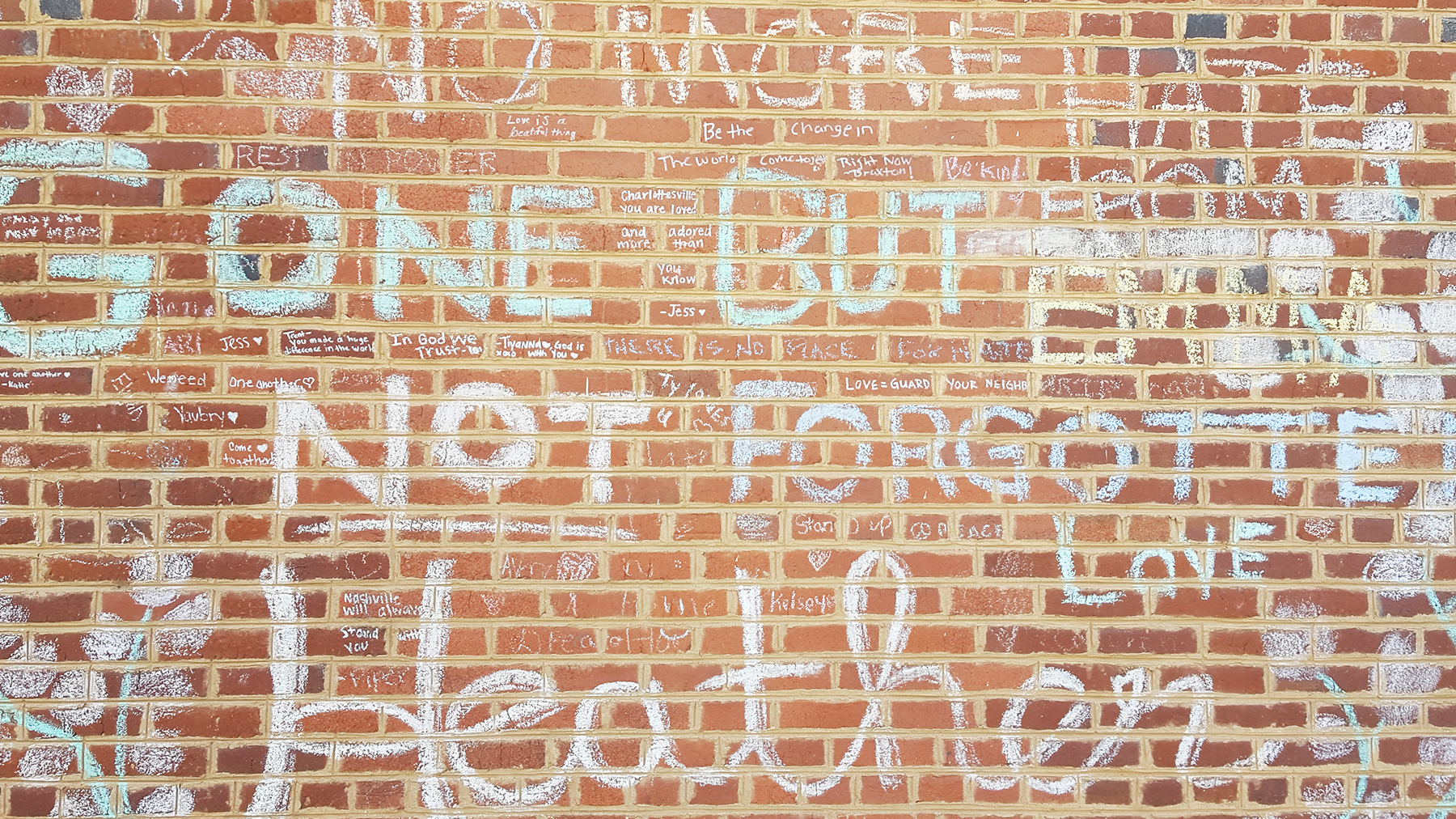 On brick walls near downtown Charlottesville, Virginia, people use chalk to remember 32-year-old Heather Heyer, who was killed Aug. 12, 2017, by an alt-right adherent who rammed his car into a crowd on a narrow street during the Unite the Right rally. The walls are also a place to denounce racism and the neo-Nazis who staged the rally.

Charlottesville is a typical progressive college town, more liberal than the rural parts around it and home to a prestigious university. Of course, founding father and large-scale slave owner Thomas Jefferson founded the University of Virginia.

The legacy left by Jefferson sits uneasy with parts of the town, which residents say has a history of racism and an unwritten separation between the University of Virginia and the locals who live there full-time.

“There’s a reason they picked Charlottesville,” said one local activist who asked that her name not be used.

Now, Charlottesville resident Jason Kessler, an outspoken racist and alt-right adherent, is planning a second rally in his hometown.

City officials have denied Kessler a permit for a second Unite the Right rally, prompting him to file a federal lawsuit. But, that’s not stopping Kessler from planning, even if other white supremacists say they won’t show up. 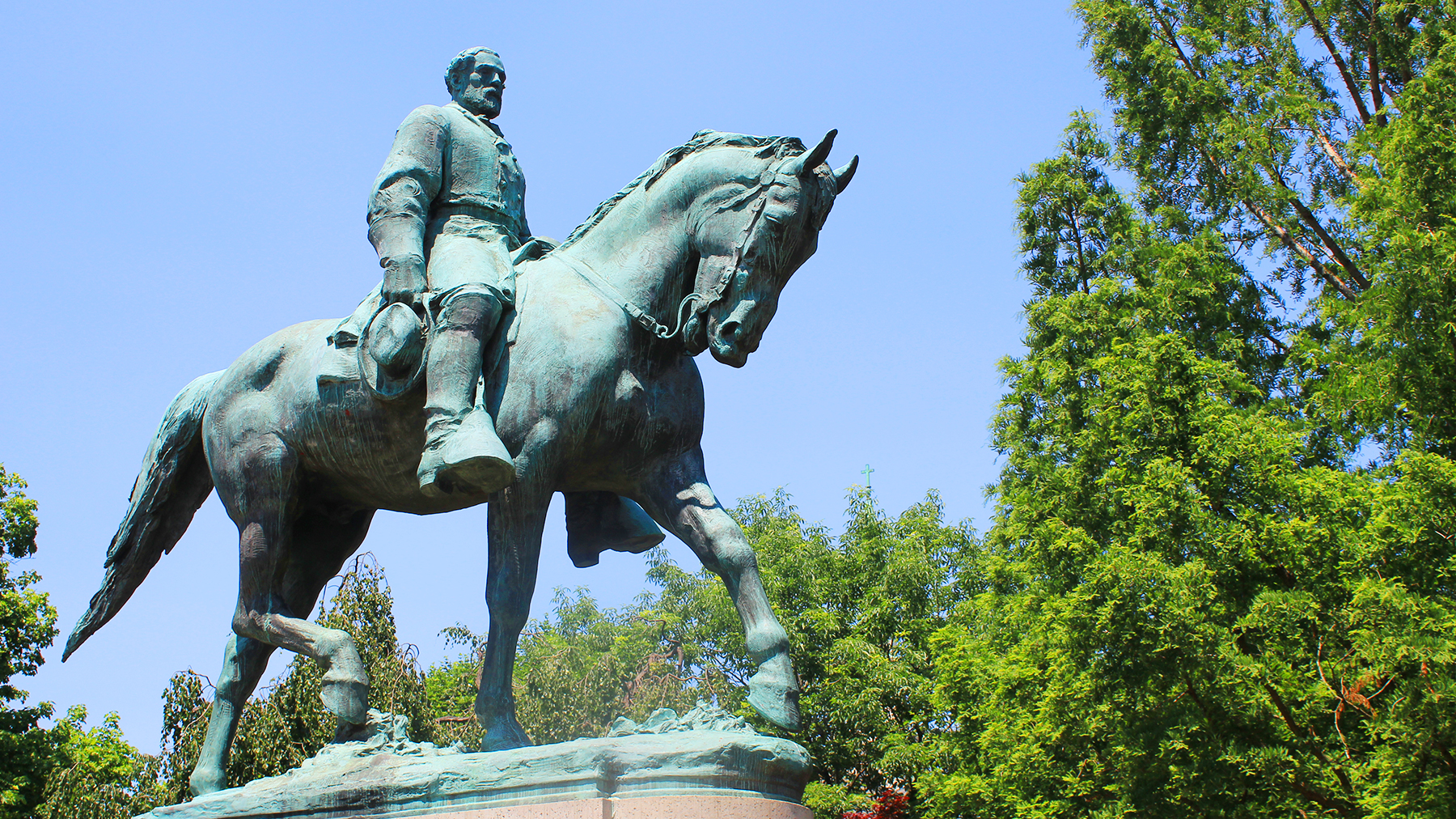 A statue of Confederate Gen. Robert E. Lee in Emancipation Park in Charlottesville, Virginia, still stands. The possible removal of the memorial was the reason given for holding the Unite the Right rally in the city on Aug. 12, 2017.

The idea of a second gathering of racists is tough on Charlottesville residents, particularly since so many haven’t yet healed from the run-ins at the first Unite the Right rally.

There’s also a lingering anger at Kessler and other white supremacist for choosing Charlottesville for the rally, his persistent presence at city council meetings and the idea that a second rally could be held again at the end of the summer.

“He’s just a provocateur at this point,” Hunter said.

Charlottesville still has to get through a multitude of criminal cases stemming from the Unite the Right, including the first-degree murder trial of James Alex Fields Jr., who is charged with running down Heyer, as well as a federal civil case.

Some, such as Hunter, feel the city isn’t ready to handle another Unite the Right rally, despite a new police chief being in place and an after-action report parceling out what went wrong the last time.

“Honestly, we can’t take another hit like that,” Hunter said.

For others, such as Gorcenski, the wounds are still too fresh.

“I have left town several times since the events, and every time I do it feels like a mental weight has lifted,” Gorcenski told the Southern Poverty Law Center. “The town looks like business is normal, but people are still suffering immensely from the trauma.”

There are few large signs that a group of white supremacists took over the downtown pedestrian mall in Charlottesville, an area filled with shops, restaurants and bars, where parents push children in strollers and people walk dogs, which are allowed to drink from water bowls outside restaurants.

But there are tell-tale small signs of what went on in the summer of 2017.

Several businesses posted a sign saying: “If diversity makes you uncomfortable, this is probably not where you want to be.”

Across the street from downtown at Emancipation Park, the statue of Confederate Gen. Robert E. Lee, the ostensible reason for the Unite the Right rally, still stands, the city having to yet make a move toward its removal.

Small stickers placed on signs about the statue being city property, though, reveal a little about what went on and the divisions that still haunt the city.

“OUR POLICE Are NOT THE ENEMY” the stickers say.

Just off the main thoroughfare through downtown, a side street has been renamed “Heather Heyer Way,” marking where a 32-year-old counter-protestor died after being run down by a car during the rally and ensuing violence. 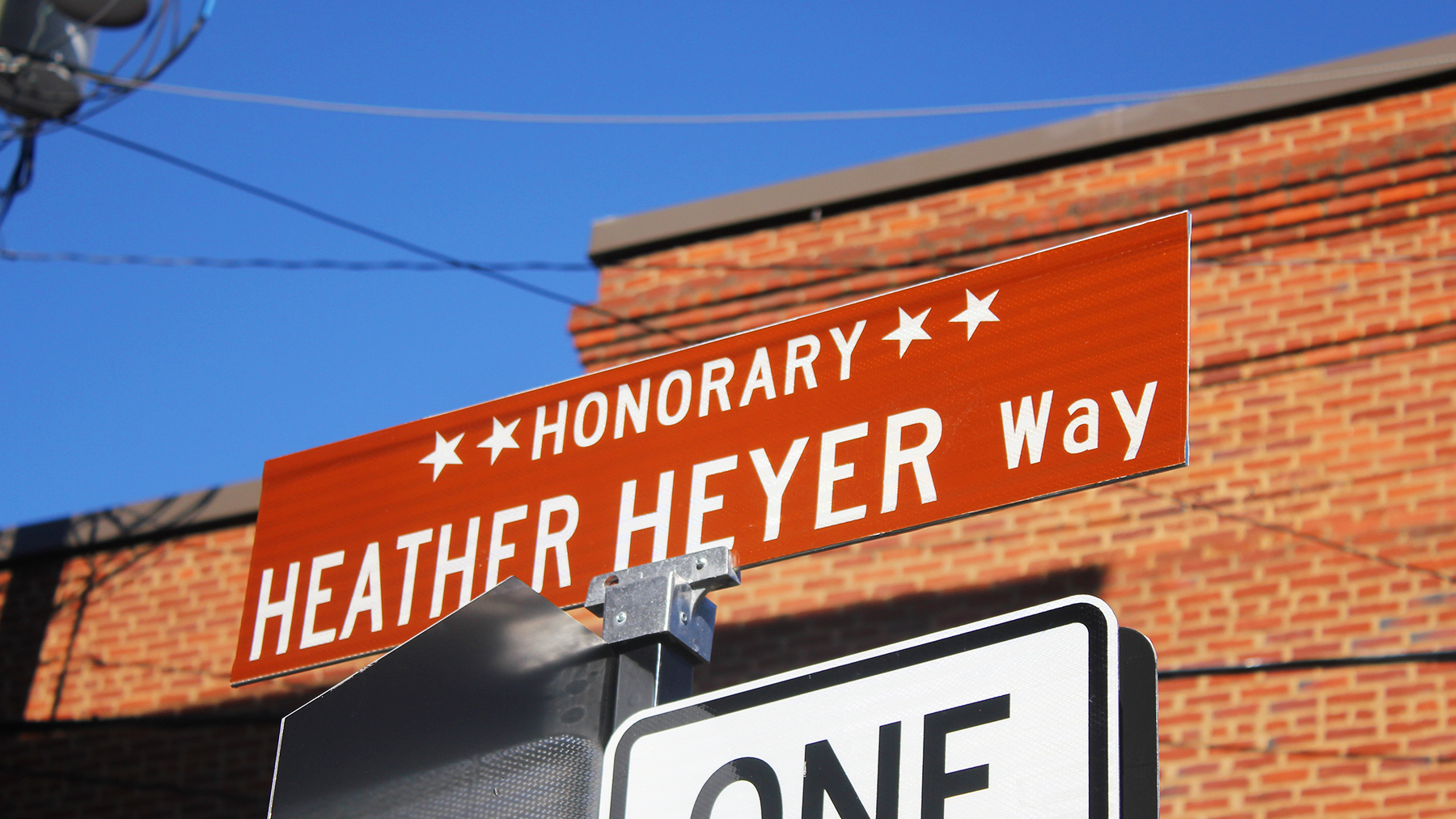 Part of a downtown street in Charlottesville, Virginia, has been renamed "Heather Heyer Way" for the 32-year-old activist killed Aug. 12, 2017, protesting the Unite the Right rally held by neo-Nazis in the city. The street has become a memorial to Heyer as well as a place to denounce racism.

People frequently leave flowers on the sidewalk and someone placed a tub of child’s sidewalk chalk so messages and memories can be etched onto the red brick walls near the a record store and Race Jewelry.

The messages – dozens and dozens, sometimes overlapping – preach a “Heyer Love,” praise Heyer as “Gone but not forgotten,” “You Magnified Her,” and denounce racism and the neo-Nazis who chose the city to hold the rally.

Heather Hill, the vice mayor of Charlottesville, said in a speech at the Festival of Cultures in the city on May 12 that the last year has been challenging for the community, but has also given residents a chance to get to know each other in a new way and “deepen our bonds.”

City Councilman Wes Bellamy, once a target of a recall effort by Kessler, said the rally pushed several things into the public eye. The rally in Charlottesville showed that white supremacy is still around in the United States and it spurred the city to create a police-civilian review board, he said.

“We’re in a much better place than we’ve been in,” Bellamy said. 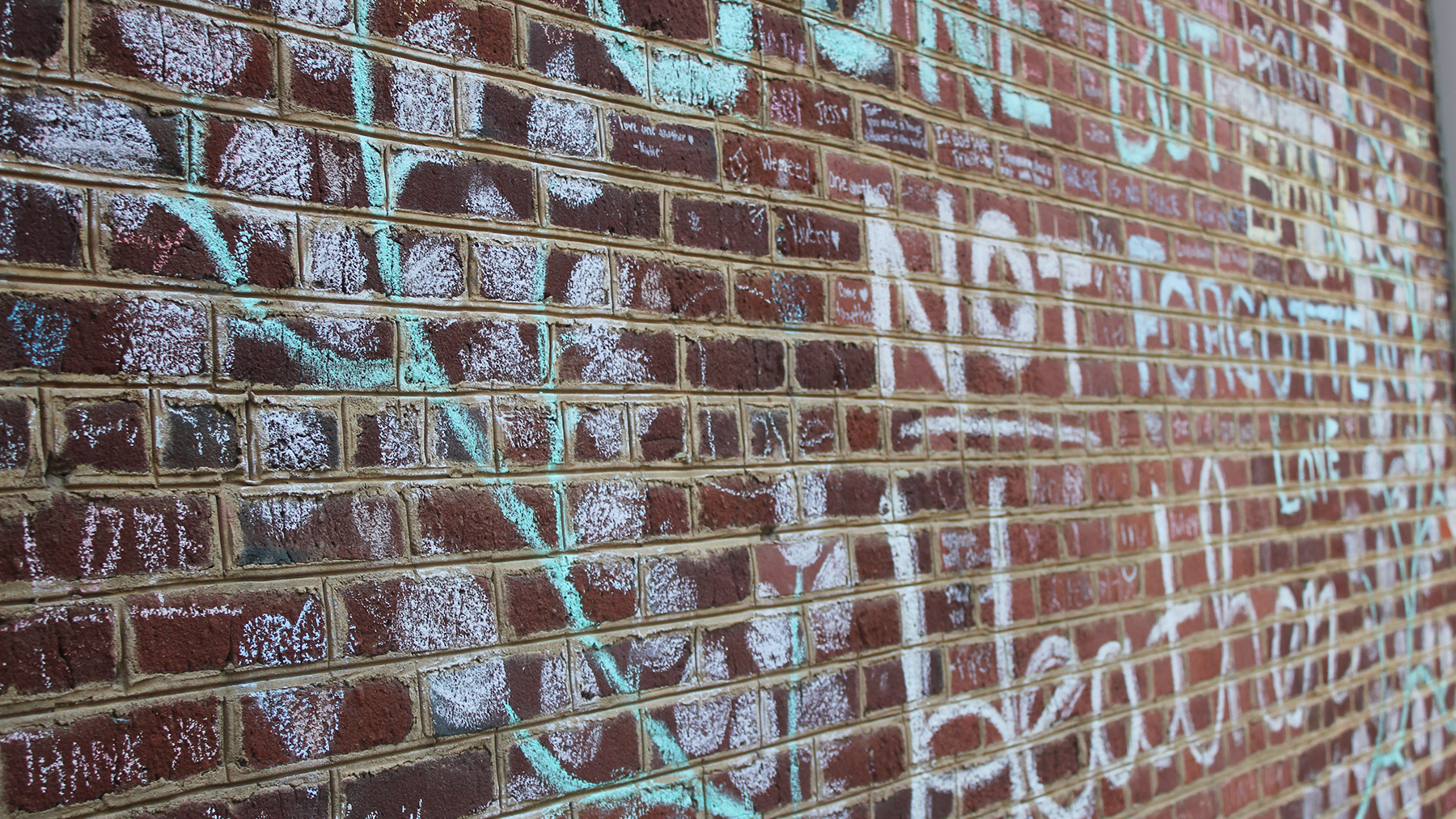 People use sidewalk chalk to leave memorials for 32-year-old Heather Heyer on brick walls on a section of street near downtown Charlottesville, Virginia. Along with the writings, flowers are sometimes placed near the spot where Heyer, who was protesting neo-Nazis and racists rallying on Aug. 12, 2017, was killed when a car slammed into a crowd on the narrow road.

Hunter hopes so, but for now, at least, part of what drew her to Charlottesville from the more conservative Virginia Beach area is gone.

“It makes us so much more serious and less idyllic about the city,” Hunter said.