Facebook accounts with Russian ties not only sowed racial and cultural division, but their ads preceded spikes in hate crimes.

One of the ads depicted a Mexican immigrant as a ravenous boll weevil and a “parasite.” Another purported to show a map of a planned American “Aztlan.” One claimed that President Obama “literally called for open war against police officers and whites.” Another depicted Islamic immigrants bringing “a culture of violence.” 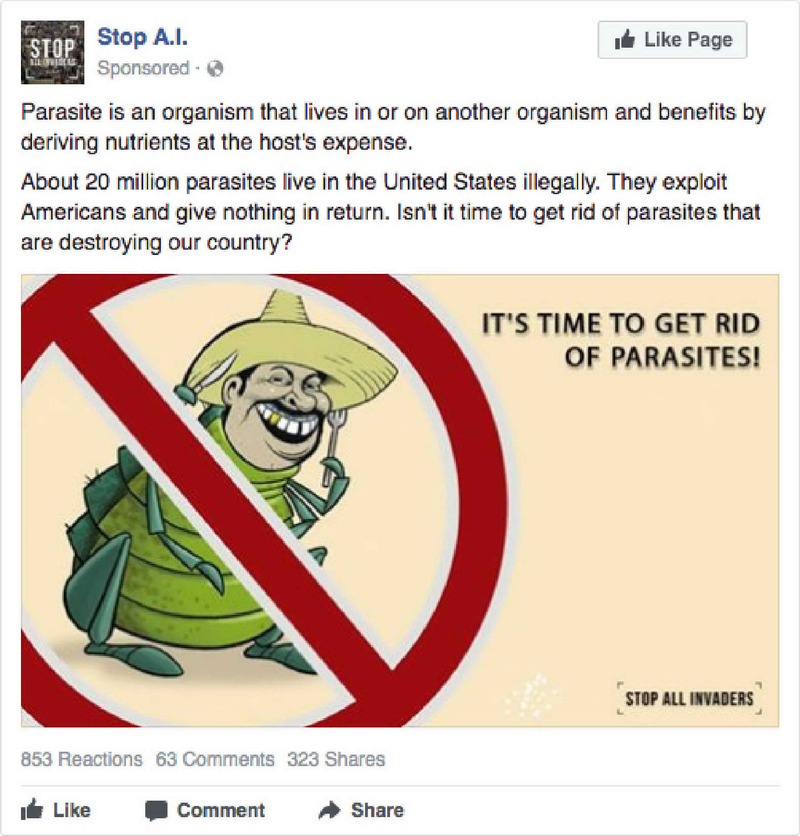 One of the ads placed by the Internet Research Agency.

Hundreds of these kinds of ads — 3,517 of them, to be precise — appeared on social-media platforms such as Facebook and Instagram during and after the 2016 election campaign, purchased by the Russian-based Internet Research Agency (IRA). Special Counsel Robert Mueller’s February indictments of 13 Russians and three companies is focused primarily on the IRA’s activities.

A report last month by USA Today explored the content and nature of the ads, and concluded starkly that their main purpose was to heighten racial tensions in the United States: “Divisive racial ad buys averaged about 44 per month from 2015 through the summer of 2016 before seeing a significant increase in the run-up to Election Day. Between September and November 2016, the number of race-related spots rose to 400. An additional 900 were posted after the November election through May 2017.”

Moreover, new data suggests that these ads were extraordinarily successful in achieving their goal.

A recently released survey of hate-crimes data compared the USA Today data with hate-crime reports released by the FBI for 2016 and found that as the ad buys increased, so did the numbers of hate crimes reported. It also found that ads targeting certain minorities or immigrants frequently corresponded with increases in bias crimes against those same minorities.

In its May 18 report, “Hate Crime Rise in U.S. Cities and U.S. Counties in Time of Division and Foreign Interference,” the Center for the Study of Hate and Extremism (CSHE) found that hate crimes in 2017 rose for the fourth straight year, reaching their highest total in over a decade — even as crime in general in the United States continued to decline.

A subsection of the report examined the correlation between the USA Today data and the particularized hate-crime figures in its report, and found that there was a clear correspondence between both the frequency of the ads and the numbers of bias crimes, as well as between the targeted minorities in the ads and the hate crimes committed against them. 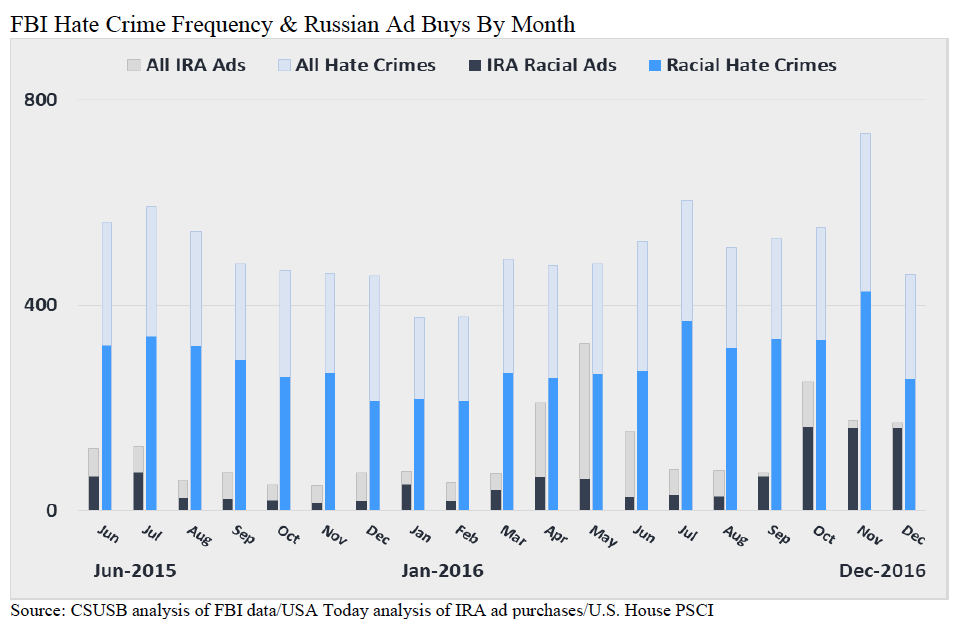 Source: Center for the Study of Hate and Extremism. Used with permission.

Their data indicated that “hate crime spikes in the fourth quarter 2016 rose most dramatically in specific subcategories referenced in the Russian ads, and that these increases were nearly coextensive with increases in Russian race-related ad activity.” The data also “showed spikes against various groups referenced in these ads during certain periods of increased Russian Facebook ad purchases.”

Much like a similar study that found a powerful correlation between President Trump’s anti-Muslim and anti-immigrant tweets and hate crimes against those minorities, the correspondence in numbers does not prove causation, but does indicate a role in the phenomenon.

“The significant correlation alone does not allow an outright conclusion respecting causation of the tremendous election time spike,” explained Brian Levin, director of the Center, which is based at Cal State University-San Bernardino. “Still, it is well worth noting that cumulatively there were 24.8 million impressions of the racially divisive Facebook ad placements alone from June 2015 to August 2017, with millions more related to crime, policing and immigration."

What role the ads played in the hate crimes spike is unclear, but it’s also clear from the pervasiveness of the ads’ appearance that they contributed to an environment in which hate crimes were more likely to happen.

"The correlation is all the more disturbing when one analyzes several factors regarding these ad placements,” Levin told Hatewatch. "Among the most common type of hate offenders according to Northeastern University researchers are those who respond ‘defensively’ in reaction to perceived threats and grievances linked to particular events.” The ads, he said, he were specifically designed to heighten those fears among their target audience.

“These Russian ads, of which about half were racially divisive, had a huge reach, with almost 500 fake accounts spewing thousands of ads that may have reached a total [of]146 million Americans. The Russians apparently not only micro-targeted ads to a specific audience deemed by algorithms to be most receptive, they gamed the system even more by winnowing out the most effective ones for additional hyper-promotion, before tactically timing their placement." 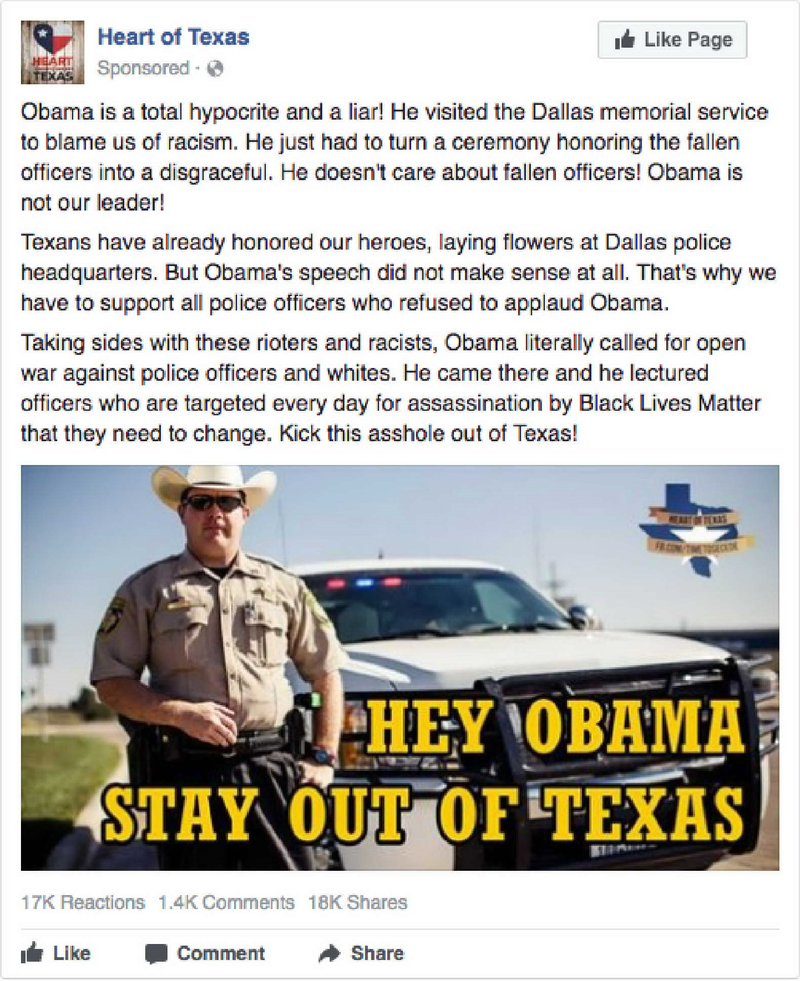 The campaign was sophisticated in how it sought to exploit racial divisions. On one hand, it promoted a large number of radical-right ideas and claims, including one ad that warned Obama not to visit Texas, as well as a wide range of ads promoting Confederate symbolism and monuments.

The ad featuring the image of a Mexican boll weevil read: “Parasite is an organism that lives in or on another organism and benefits by deriving nutrients at the host’s expense. About 20 million parasites live in the United States illegally. They exploit Americans and give nothing in return. Isn’t it time to get rid of parasites that are destroying our country.”

Another ad from the same account depicted Islam as a culture of violence: “What would you do if your wife or husband converts to Islam? In the worst case, you would sue for divorce. But I’m sure you would not kill your spouse. That’s the difference between our cultures.” 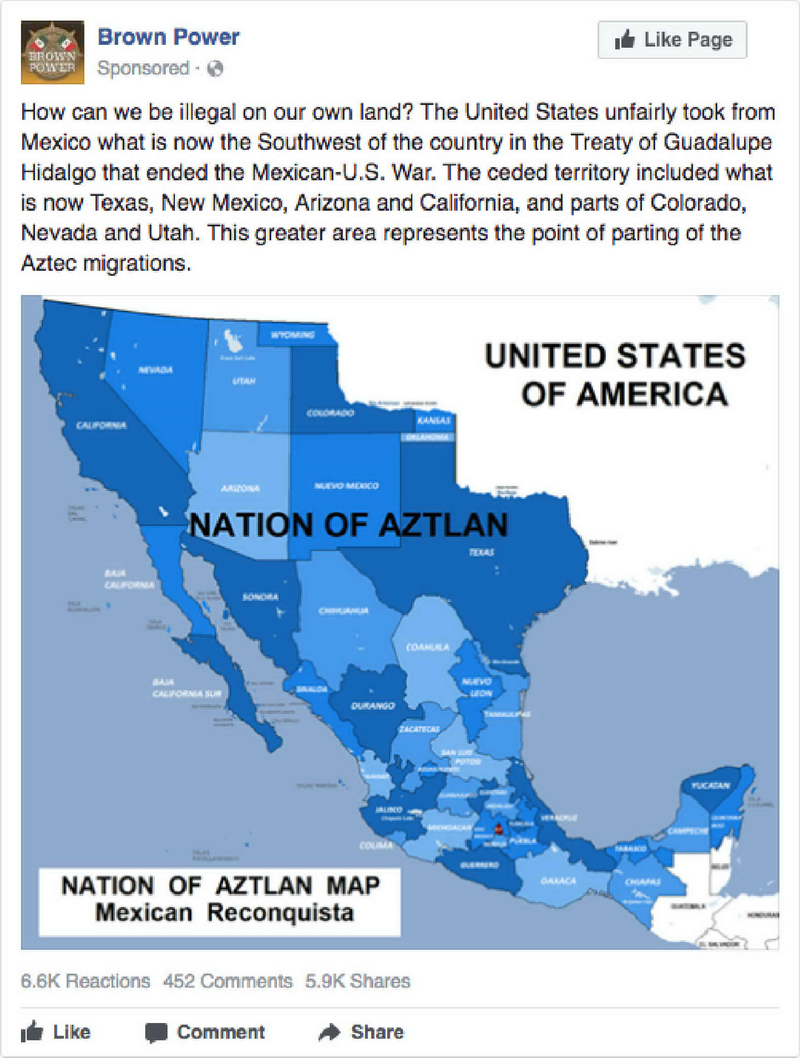 An ad from the supposedly pro-Latino "Brown Power" account.

Yet at the same time, a large number of them were apparently intended to attract minorities such as disenchanted black people, Latinos, and gays, mainly with Facebook accounts such as “Woke Blacks,” “Brown Power” and “LGBT United.” These accounts seemed to favor fringe claims that often depicted whites in a uniformly bigoted light and police officers as uniformly racist or bigoted. In one case, a “Brown Power” ad featured a “Nation of Aztlan” map comprised mostly of the southwestern United States and Mexico, and demanded to know: “How can we be illegal in our own land.”

The belief that Latinos widely support an Aztlan-style reunification with Mexico has been promoted by white nationalists for many years. Accordingly, the ad’s appeal may have been as much to nativist extremists who displayed it as proof of Latino perfidy as to any Latinos themselves. 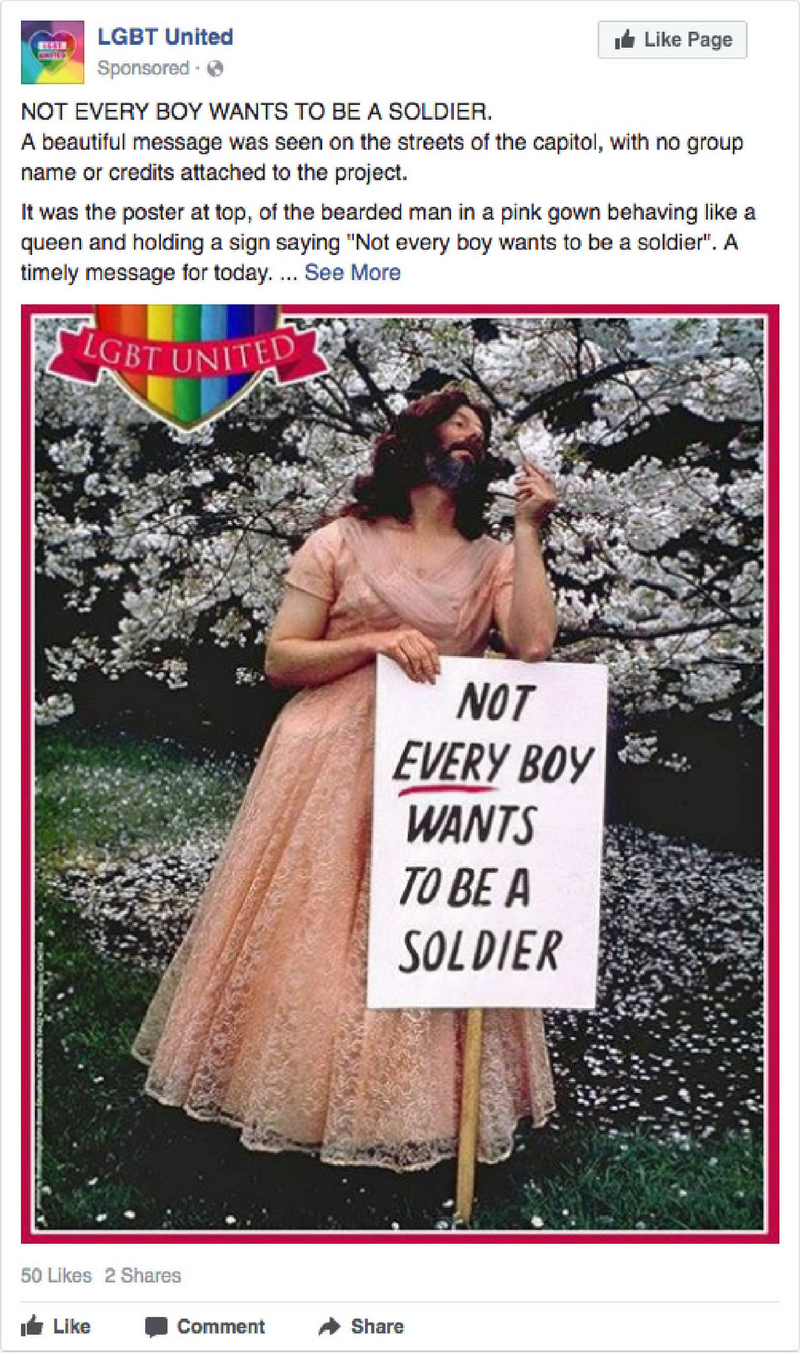 An ad from the ostensibly pro-gay "LGBT United" account.

Similarly, a number of the ads from supposedly pro-minority accounts featured images seemingly intended to stoke visceral responses from conservative readers, including an a “Woke Blacks” ads featuring an old photo of 1960s black radical Angela Davis pumping her fist, as well as ads from “LGTB United” featuring a bearded man in a tutu with a sign reading, “Not All Boys Want to Be Soldiers,” or images of two men openly kissing.

“The massive micro-targeted barrage of bigoted negative stereotypes to millions of pre-selected Americans most emotionally receptive to them, not only reinforced these polarizing fears, but lent a veneer of communal peer approval as well,” Levin explained. “The Russians deftly timed and brewed a volatile online stew of the most common foundational elements underlying hateful behavior by linking polarizing catalytic events and individual fears to a peer community that shares and validates a direct response to promoted grievance.

"While a definitive quantitative link is elusive, the scope, timing and substance of these divisive ads amplified and metastacized the underlying negative stereotypes that are key foundational catalysts for hate crimes,” Levin added. “The fake ads not only validated visceral fears and tribalism at a nadir in race relations, they also reinforced the notion of peer group ‘permission’ to not only embrace these prejudices, but also to act upon them on aggrieved community's behalf.”

Rep. Adam Schiff, the California Democrat who released the ads to the public in his role as minority leader of the House Intelligence community, saw a similar effect at work.

“These ads broadly sought to pit one American against another by exploiting faults in our society or race, ethnicity, sexual orientation and other deeply cynical thoughts,” Schiff told USA Today. “Americans should take away that the Russians perceive these divisions as vulnerabilities and to a degree can be exploited by a sophisticated campaign.”