On May 31, the Huffington Post published a story exposing Twitter user @AmyMek, an ardent Trump supporter and prolific anti-Muslim troll. Behind the account is a woman named Amy Mekelburg, who lives in New York City.

Averaging around 25 tweets a day — almost all of them anti-Muslim — Mekelburg has 230,000 Twitter followers and has received several endorsements from Donald Trump on the social media platform.

As reported by Huffington Post, Mekelburg sought to turn her online anti-Muslim activity into real-life activism. With the help of anti-Muslim provocateur Anni Cyrus, she founded the organization Resistance Against Islamic Radicals (RAIR). The original mission was “to stop the Jihadi infiltration in our American communities.” RAIR’s website also allowed visitors to report “accomplices” supposedly “complicit in the advancement of Sharia in the U.S.” The bar for making the “accomplices” list, however, was low. Some of those listed included Iowa city council members and newspapers like The Daily Iowan. Some made the list for endorsing or donating to Mazahir Salih, the first Sudanese-American elected to the Iowa City Council.

Information published on social media and reviewed by Hatewatch show that RAIR’s president is Chris Gaubatz, a well-known anti-Muslim figure previously affiliated with the hate group Understanding the Threat.

Despite his own anti-Muslim views, Gaubatz has gained inroads with mainstream Republican figures and groups. In 2016, he was invited by Sen. Ted Cruz to testify at a Senate subcommittee hearing titled, “Willful Blindness: Consequences of Agency Efforts to Deemphasize Radical Islam in Combating Terrorism.” Gaubatz used the opportunity to accuse the only two Muslim members of Congress of having ties to the Muslim Brotherhood. Earlier this year, the Amherst County Republican Committee in Virginia invited him to speak at one of their events.

Gaubatz gained notoriety with anti-Muslim circles for posing as a Muslim convert and interning at the American Muslim civil rights organization Council of American-Islamic Relations (CAIR) in hopes of exposing them as a Muslim Brotherhood front group. CAIR and other Islamic advocacy organizations are regularly slandered by anti-Muslim groups as being fronts for the Muslim Brotherhood.

Though not the most outspoken anti-Muslim figure, Gaubatz has presented Islam as a violent religion and subscribes to a variety of anti-Muslim conspiracy theories. In 2016, he joined up with former FBI agent turned anti-Muslim conspiracist John Guandolo. Up until April of this year, Gaubatz served as vice-president of Guandolo’s consulting firm Understanding the Threat (UTT). During that time, Guandolo and Gaubatz traveled the country providing training seminars about the “jihadi threat” to law enforcement and civilians.

The SPLC and other civil rights groups have kept the pressure on UTT who, because of their anti-Muslim bias, have no business training law enforcement. Presumably finding it harder to book law enforcement training gigs, Guandolo and Gaubatz began turning more toward civilian trainings. However, in April, UTT suffered a major setback when a Midwest speaking tour fell apart after all but one of the venues canceled. Later that month, Guandolo appeared on “Sandy Rios in the Morning” and said the cancelations were the result of a concerted effort by the “Islamic” and “Marxist” movement. When asked by Rios what he would do if he were king, Guandolo responded that he would “execute” his political opponents, including U.S. elected officials, for sedition. “I would start with the people supporting the Islamic movement and the Marxist movement, Democrat leadership at the national level, Republican leadership at the national level,” he stated.

The speaking tour flop saw another development — the departure of Gaubatz from UTT. Guandolo says there is no ill will between the two men. Attempts by Hatewatch to contact Gaubatz were not successful.

What is the RAIR Foundation?

Within the last two months, Gaubatz reappeared on the anti-Muslim speaking circuit with a new title, president of Rise Align Ignite Reclaim, or RAIR Foundation, whose mission is to “reclaim America from the network of individuals and organizations waging war on our Constitution, borders and Judeo-Christian values.”

Materials associated with the group reveal this is the same organization associated with Mekelburg, only the name has been changed and the mission statement slightly altered. The branding, however, has remained the same.

Additional proof comes full circle on Twitter, where both Gaubatz and Mekelburg’s bios linked to the same website: rairfoundation.com, which is now behind a membership wall. Gaubatz and Mekelburg removed the links to the RAIR Foundation in their bios, presumably after Hatewatch reached out to Gaubatz to ask him about his ties to Mekelburg and RAIR. 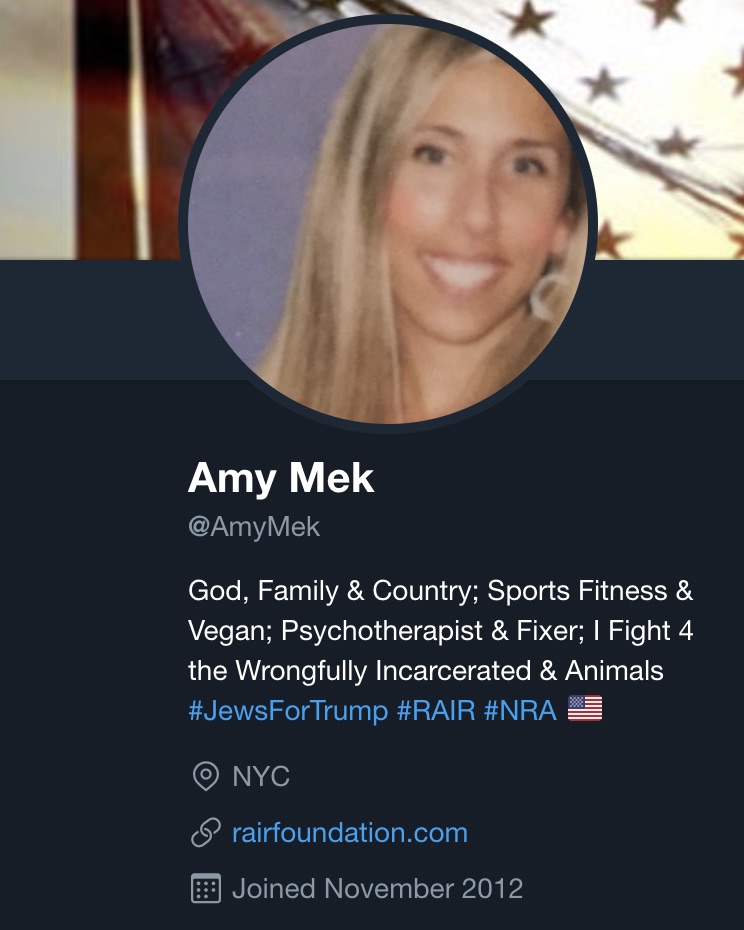 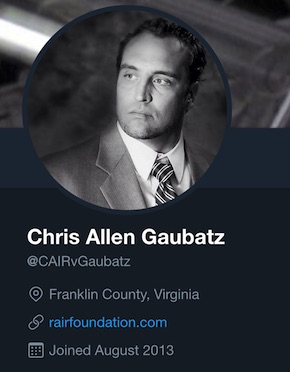 Mekelburg wrote in a June 7 tweet that the Huffington Post and CAIR teamed up against her “when @CAIRvGaubatz [Gaubatz's Twitter handle] & I began to work together." 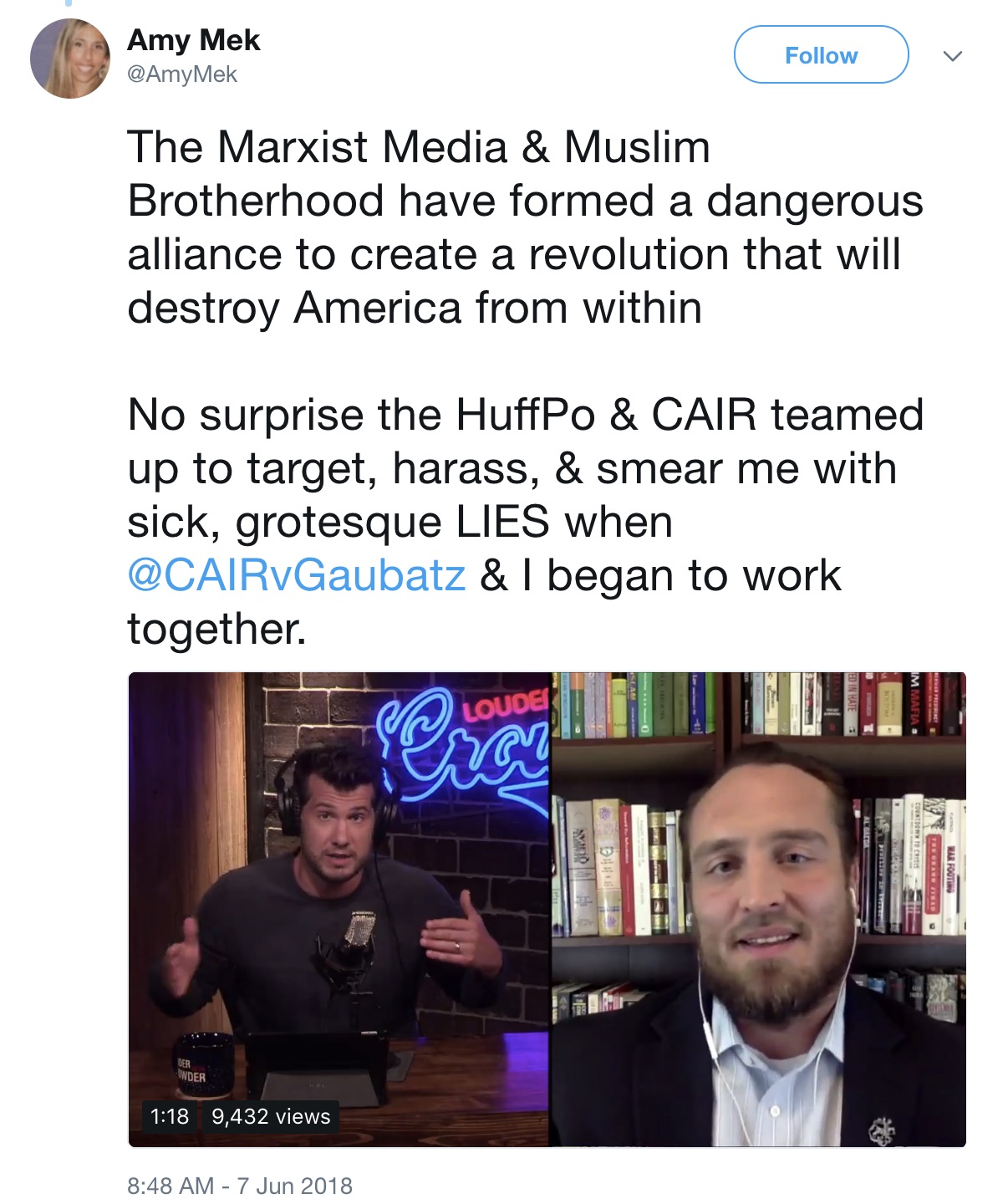 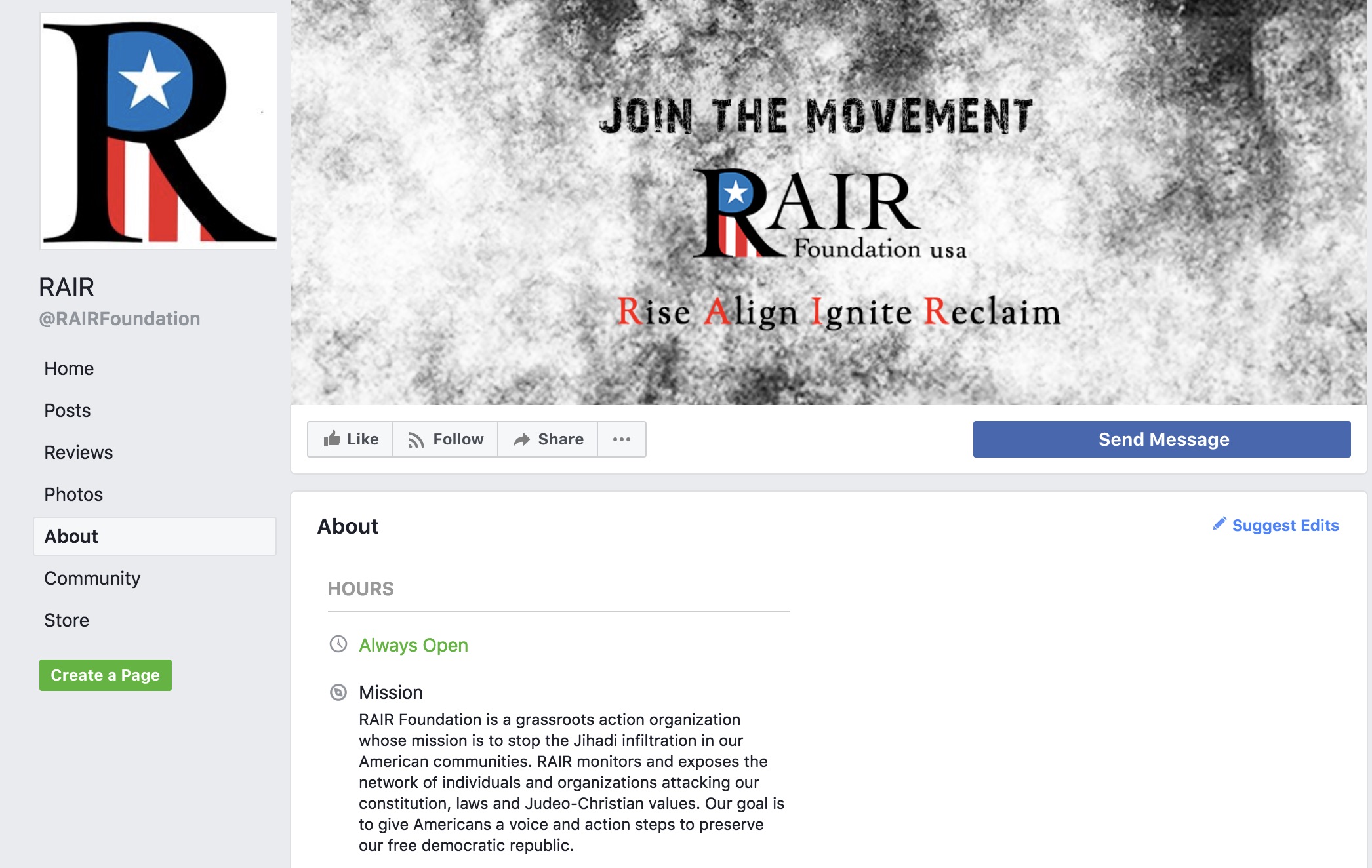 It appears Gaubatz and Mekelburg have had mutual respect for one another over the years and have shared a rapport on Twitter. Mekelburg has tweeted videos of Gaubatz testifying on Capitol Hill. She also promoted the work of UTT. Gaubatz has replied to Mekelburg’s tweets and tagged her in posts of his own.

Mekelburg’s exposure by Huffington Post has sent prominent anti-Muslim figures like Pamela Geller and Robert Spencer into a frenzy. As reported by Luke O’Brien, Mekelburg had been trying to gain entry into the organized, well-funded anti-Muslim movement. The launch of RAIR was her attempt at doing so. However, given the revelations about Mekelburg, the future of RAIR remains uncertain.