The far-right groups Patriot Prayer and the Proud Boys will converge on Portland in a matter of days, but Patriot Prayer leader Joey Gibson and his followers were apparently unable to wait until this weekend to harass the city’s residents and provoke left-wing activists.

The two groups have momentum from their last violent outing in Portland, a rally on June 30 that quickly became an all-out melee between right-wing rallygoers and antifascist counter-protesters. Gibson has said attendees plan to bring guns and other weapons to the city for the upcoming August 4 rally. The Proud Boys, a far-right extremist group styled as a men’s drinking club, will provide armed “security” for the event. In 2018, the SPLC named the Proud Boys a hate group because of its members’ ties to the racist right, their rhetoric denigrating Muslims and women, and the group’s affiliation with events featuring right-wing extremists.

Unable to pass up the opportunity to needle their political opponents, Gibson and a herd of supporters traveled to Portland’s “Occupy ICE” camp twice last week to harass activists there protesting the Trump administration’s child-separation immigration policy. He recorded the group’s activities on Facebook Live. Claiming he just wanted to talk, Gibson instigated a series of fruitless, sometimes unintelligible exchanges with the demonstrators at the camp. Behind him, members of his posse can be heard taunting and challenging people. In one video, the Patriot Prayer group is separated from the ICE protesters by a chain link fence, and Gibson argues with a masked man on the other side. Contradicting his insistence that his group is there to start a dialogue, his associate, Patriot Prayer and Proud Boys member Tusitala “Tiny” Toese baits the protester, “That’s all you do, talk. Try something!”

Toese has cultivated a reputation for violence at Patriot Prayer’s many far-right rallies, and for seeking it out apart from those demonstrations as well. In June, a Portland man told the Guardian that Toese and two other Proud Boys taunted him outside a shopping center, and when he talked back, Toese got out of the pickup truck and punched him in the face. On June 30, police arrested Toese and his companion, Donovon Flippo (also a member of the Proud Boys), on assault charges that appear to be connect to the alleged attack. In May, Toese and fellow Proud Boys member Russell Schultz drove through Vancouver, Washington into Portland flying a flag with an antifascist symbol on it, which they had spray painted over with the words “Nazi f---.” Toese recorded the incident and posted the video on Facebook.

“We’re coming for you!” Toese says in the video in a singsong voice. “We’re gonna send you a clear message today.”

Gibson does not explain his decision to bring someone with Toese’s temperament along in pursuit of a peaceful dialogue. At the end of that Occupy ICE video, Gibson suggests he fully anticipated Toese would become violent, chuckling to the camera that the masked protester got off easy. “Tiny’s gone a long way, to hold back for that long. I’m surprised he didn’t tear down that whole fence and eat him. Damn, that kid’s lucky.”

Later in the video, he obfuscates Patriot Prayer’s role as instigator by shifting the blame onto Portland’s law enforcement. “Obviously August 4th there will be conflicts, there will be violence,” Gibson said. “Because the police will probably stand there and wait until people are bleeding and on the ground.”

Gibson’s Facebook live streams are riling up his followers online. The videos of the Occupy ICE confrontations are replete with comments cheering the prospect of violent confrontation. “I should introduce them to my riot stick,” wrote one user, while another counseled Toese to “save” his aggression “for the 4th.”

“Why talk just end their lives,” another commenter wrote. That person went on, “Civil war needs to happen…They’re trash.”

In the run-up to Saturday’s rally, Gibson has posted periodically on Facebook about the event’s logisitics, including emphasizing that Patriot Prayer and the Proud Boys intend to bring firearms — as he insists they always have. In the past, guns were restricted in the actual rally area, which was a federally managed park. But the venue this time is a few blocks away in the Waterfront Park, where the rules are governed by a local ordinance allowing guns if you have the proper concealed carry license. Gibson also said in one Facebook video that the buses bringing rallygoers from Vancouver to Portland will have “armed security” carrying their guns across state lines.

Vincenzo Molino commented, “If the ninjas try to rush the bus again this weekend, [Proud Boy guards] will let 2 or 3 lucky ones on the bus and say, ‘now youse cant leave’ and the rest will watch in horror through the glass on what happens, itll be be [sic] a great show, like looking at hookers thorough the glass in Amsterdam.” Molino has attended Patriot Prayer events in the past and is a “Fourth Degree Proud Boy” — a distinction members earn by beating an antifascist protester.

On Tuesday, Gibson appeared on Alex Jones' conspiracy mill, Infowars, where he told Jones he had a plan for far-right agitators, most of them Proud Boys, to don masks and “infiltrate” groups of left-wing antifa counter-protesters on Saturday.

He elaborated in a Facebook video posted that afternoon, calling the scheme “fun” and “unique” and eagerly predicting it would “bug” counter-protesters “emotionally and psychologically.” But when discussing melee tactics, he also suggested the infiltrators would engage in physical violence. He told supporters not to worry about charging in to confront antifa, because, “remember, we’re gonna have a bunch of people within antifa, okay? And they’re gonna take care of business within their group, too.”

“It is hard to do what we’re doing,” he said. “It’s easy to do what they do. Until they get punched in the face and knocked out and then have to go to the hospital.” 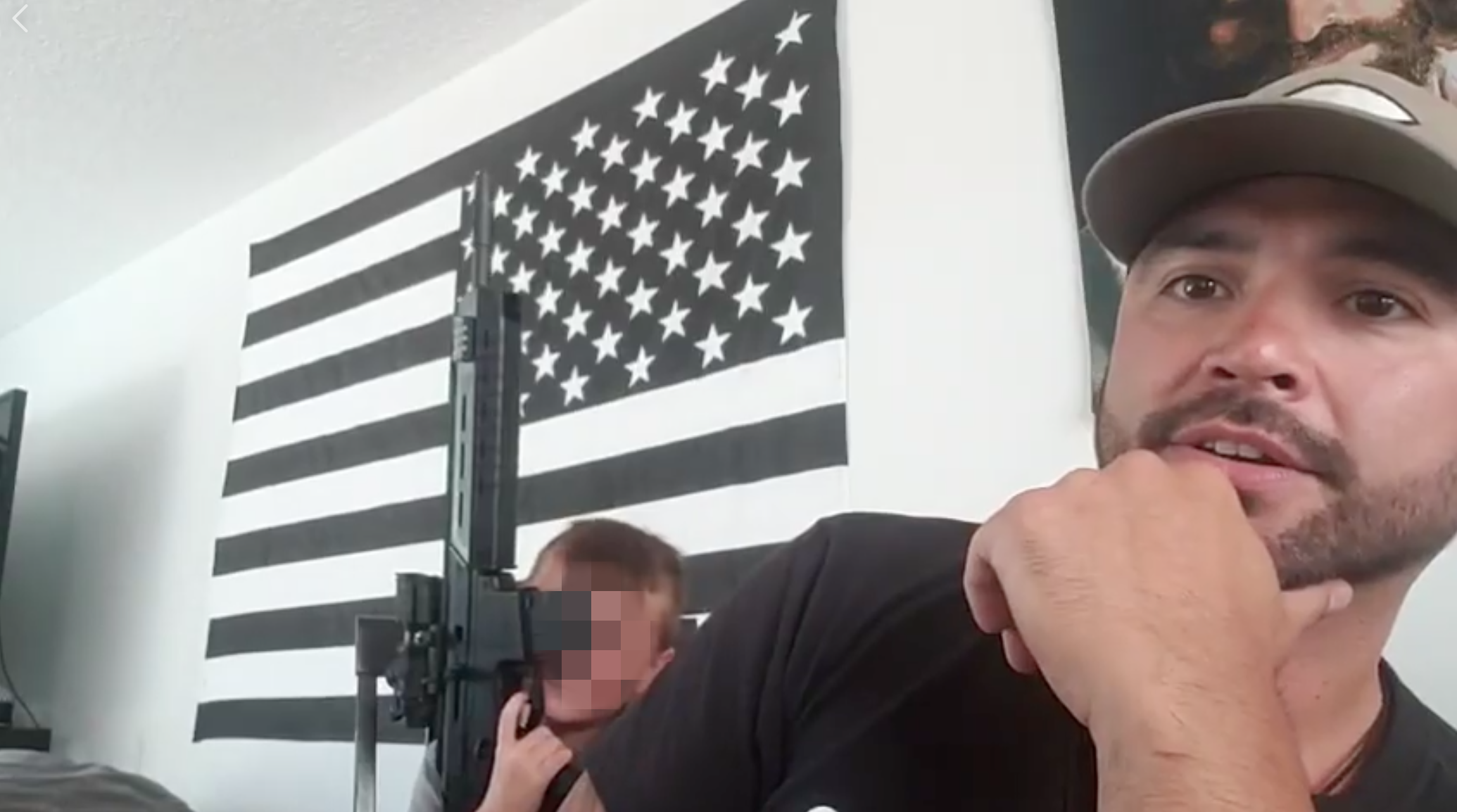 When asked during a livestream video about the scene behind him, Gibson laughed and said, "That's [my son]'s first gun. I don't know, he's really excited about it. I told you there's lots of guns in the house."

In that video, Gibson reiterated the group’s plan to come to Portland fully armed. This time he made the announcement while his young son sat behind him waving around what Gibson laughingly called his son's "first gun." It's unclear whether what his son was playing with was a toy.

“Guns are not weird,” he said. “I think that we have guns on us at all times. And that’s not an extreme statement, that’s completely normal. We have several guns in our house, everywhere.”