Multiple people, including a journalist, were injured and at least two people were arrested this afternoon in Portland, Oregon during clashes between police, counter-protesters and the far-right groups Patriot Prayer and the Proud Boys.

Eder Campuzano, a reporter with The Oregonian newspaper, was hit by some type of object and was seen bleeding from the head in a photo posted to Twitter by a local TV journalist.

Campuzano “will be okay and is leaving to get medical attention,” television reporter Tyler Dumont of KPTV wrote in a later tweet.

Meanwhile, supporters of the groups that organized the rally were also injured during the event.

HuffPost reporter Andy Campbell posted a series of tweets showing people from Patriot Prayer side of the event “bleeding from their ears and eyes.” 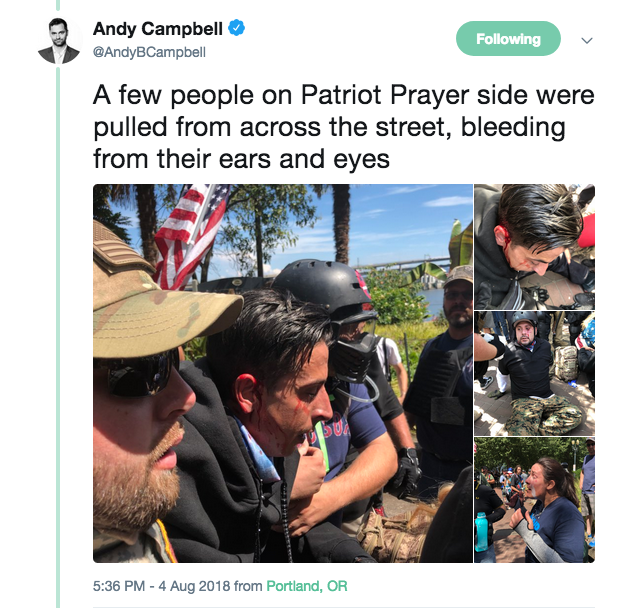 It was not immediately clear what led to the injuries, and there were reports on Twitter of confrontations with antifascist counter-protesters as well as infighting among the far-right groups.

Campbell said on Twitter that he didn’t see what caused the injuries but quoted someone who was aiding one of the injured Patriot Prayer supporters: “We clocked some people too. F--- those c----------.”

At least two counter-protesters appeared to have been arrested by Portland police. One of them was seen throwing water at police officers.

Outbreaks of violence between far-right rallygoers and antifascist counter-protesters appeared to be taking place after Portland police ordered both sides to leave the area.

Journalist Brendan O’Connor posted a series of photos to Twitter showing what he said were members of the Proud Boys, an SPLC-designated hate group, who “sprayed bear mace at antifa” from a pickup truck and then drove away.