Notorious crypto-anarchist and antigovernment extremist Cody Rutledge Wilson left the country on a flight to Taiwan after he was alerted of an impending investigation against him for his alleged sexual assault of a minor.

Before he departed, Wilson cleared out personal cryptocurrency accounts and one related to his business, Defense Distributed, which sells a boutique milling machine for finishing unregistered AR-15 lower receivers.

The charges against Wilson stem from an alleged encounter with an unnamed victim on Aug. 15. A sworn affidavit by a police detective with the Austin, Texas, police department’s Human Trafficking/Vice Unit maintains that Wilson and the victim, who is under the age of 17, met at a coffee shop after exchanging nude photos on the website SugarDaddyMeet. The affidavit said Wilson then drove the victim to an Austin hotel in a car licensed to Defense Distributed. Wilson and the victim had sex and he paid her $500 in $100 bills before dropping her off at a nearby Whataburger, according to the affidavit.

As reported by Wired, Wilson “was informed by a friend of the victim that she had spoken to police, and police were investigating him for having sex with a minor.”

Bitcoin accounts identified as belonging to Wilson and his company by Hatewatch staff show that on Aug. 16, 2018, in a little over an hour, Cody Wilson emptied more than 60 bitcoin accounts with five transactions totaling $986,525. These transactions can be viewed through the cryptocurrency’s public ledger.

All funds were transferred to a new 1FBxL account with a value of around $1 million.

No IP addresses or countries of origin are visible for those transactions through the public ledger. 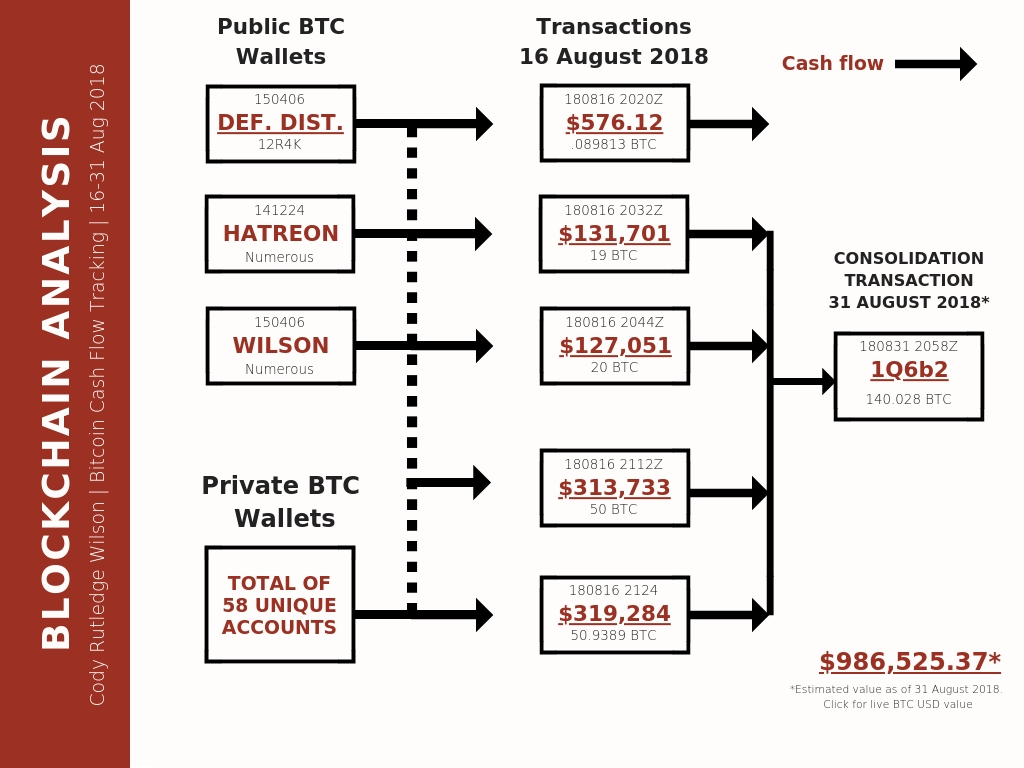 A commander of the Austin Police Department said Wilson’s last known location was Taipei, Taiwan, a country with no extradition treaty with the United States.

In 2014 Wilson created a short-lived project called “Dark Wallet” with British cryptocurrency pioneer Amir Taaki. Dark Wallet was intended as a secretive alternative to traditional cryptocurrency platforms, which typically allow transmissions of funds to be traced. Dark Wallet would hide account activity through a process known as “mixing,” which involves breaking up bitcoin transactions in between the sending and receiving addresses to make the transactions harder to trace through the blockchain.

Wilson publicly demonstrated his knowledge of cryptography and digital currencies. In an interview with the BBC’s “HARDtalk” he discussed his holdings in private key cold storage wallets.

In an email exchange with Hatewatch staff in February 2018, Wilson was evasive when asked about periodic transfers over the course of three years of Defense Distributed’s bitcoin into cold storage wallets.

Wilson responded: “Re: the BTC, I suppose your numbers are incomplete and I don’t recognize your characterization of my habits. What’s public is public, but I don’t ‘move’ bitcoin and also rarely spend any. I’d certainly never deny having it though.”

﻿Two of Wilson’s projects are listed in the Intelligence Project’s 2017 report on domestic Hate and Extremism. The now-defunct Hatreon, listed on the Hate Map, was explicitly intended to serve as a fundraising platform for the racist “alt-right” in the face of efforts by tech companies to begin policing hate content.

When questioned in media interviews about his decision to provide material support for the alt-right after the disastrous aftermath of its Aug. 12, 2017, rally in Charlottesville, Virginia, Wilson dismissed the danger of promoting the alt-right.

No I’m not worried about [helping fund the alt-right]. When I’m talking about incitement or imminent lawsuits, I’m talking about, like, when you’re outside of someone’s home and there’s a mob and you say, ‘There he is, get him!’ That’s not protected speech. But these personalities that use Hatreon right now, these people who have been kicked off these services, these people are at worst trolls, performance artists, provacateurs, vulgarians. And at best, they represent through their hyperbole or through their extreme thinking or presentations, elements of a political speech that should not be censored. That’s entirely possible, and you don’t have to join my shitty little site with its dumb name. But you know no matter what that if you do won’t be kicked off of it.

Hatreon ultimately floundered after credit card companies blocked the use of their services on the site. The most recent update to Hatreon, on Feb. 9, 2018, reads, “Pledging is currently disabled while we upgrade our systems.”

“And so when I see, like, the elimination of a symbol, right, the elimination — I’m not just sympathizing with Southern white racists — I’m basically recognizing a dangerous mode of post-politics: the need to eradicate a historical narrative.”

Wilson has himself hinted at racist views. In an appearance on “YOUR WELCOME” with Michael Malice, Wilson propagated a prominent white nationalist canard that holds that minorities are inherently more violent and are responsible for most gun-related homicides.

I mean it just comes down to how you interpret the figures and the statistics. I mean for our per capita gun ownership it’s actually a decent violent crime rate, right? It’s actually a pretty reasonable gun homicide rate. And when we do digest the numbers even further we see and can begin to see specific causes for the gun crime that we do see. It isn’t white people in North Dallas shooting each other to death on the streets, right? And I’ll probably leave my analysis at that comment.

Wilson also bragged in the appearance about calculations by Hatewatch that he generated a considerable portion of the alt-right’s fundraising in 2017.

Defense Distributed, Wilson’s main business venture, is listed among other antigovernment extremists based on its founder’s stated antigovernment beliefs.    Wilson created the company to legitimize his plans to publish design files for a downloadable 3D-printed pistol, known as the Liberator.

Barred from releasing the files on the open web, Wilson instead began selling a boutique compact milling machine specifically designed to create unmarked AR-15 lower receivers. The Ghost Gunner has generated considerable revenue for Wilson, to the tune of around $6 million by the 2016 presidential election. It is unclear what percentage of that revenue was generated through cryptocurrency.

Many in the extremist community were excited by the potential of Wilson’s “Ghost Gunner” machine, particularly neo-Nazi hacker Andrew “weev” Auernheimer, who discussed an illegal moneymaking scheme utilizing the product on an episode of his podcast: 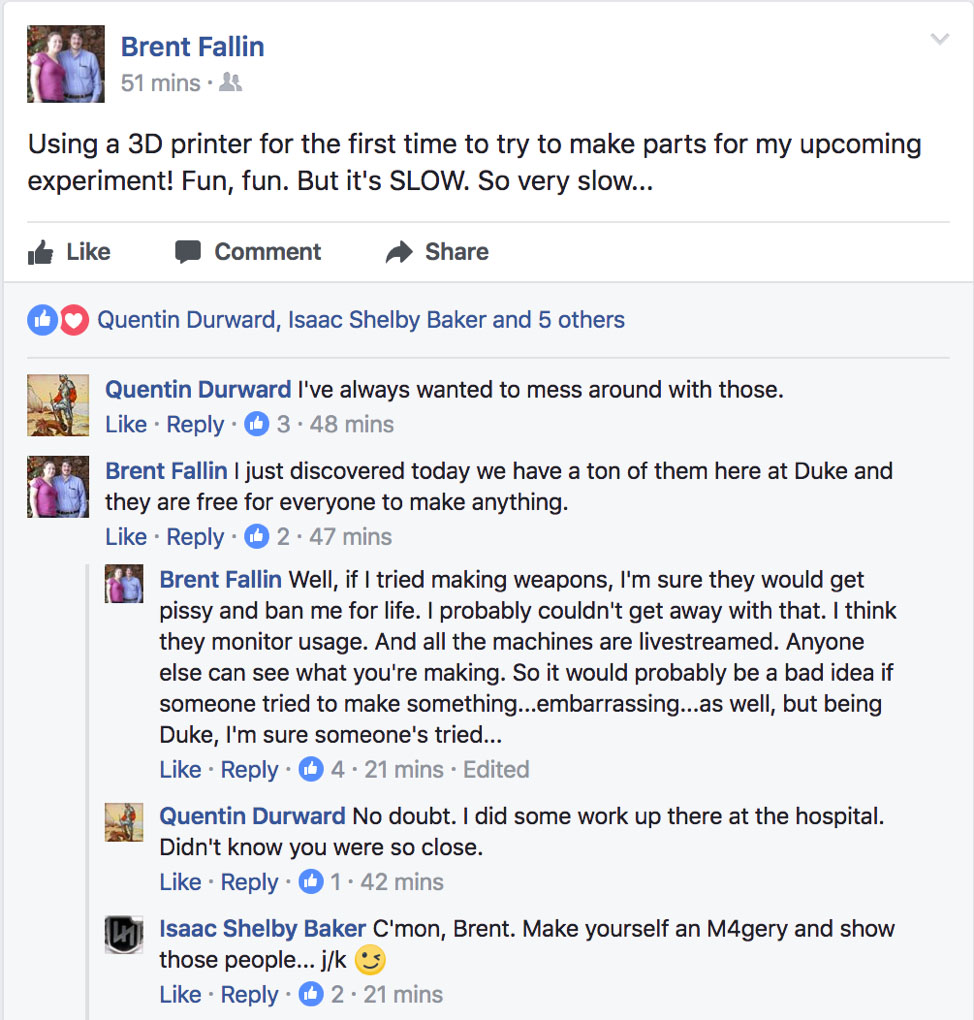 Brent Fallin, a member of the neo-Confederate League of the South and Ph.D. student at Duke University’s Triangle Universities Nuclear Laboratory, shared a post in 2016 pondering whether he could 3D-print a weapon like Wilson’s Liberator on one of the university’s machines.

A recent lawsuit intended to block Wilson from posting gun files to the open web brought his name back into the headlines and garnered considerable public support from many on the mainstream right.

Ann Coulter tweeted, “So far, the only smart person I’ve seen talking on TV this week is Cody Wilson on Fox News Sunday. @Radomysisky” on Aug. 5. The NRA’s Dana Loesch was effusive in her praise of Wilson’s crusade to circumvent conventional manufacturing restraints on the private ownership of firearms.

Wilson shared two fundraisers to aid his pending legal battles against 19 state attorneys general, both of which raised around $348,000, with an option for funders to donate in cryptocurrency.

Wherever Wilson is now, his flight from the law will be greatly aided by his knowledge of and access to difficult-to-trace cryptocurrencies.