The speakers were lined up and the promotions had started for “Unite the Right,” the large gathering of racists, white supremacists and alt-righters in Charlottesville, Virginia.

On the surface, all seemed to be going smoothly.

But underneath, various racist “alt-right” leaders worried about rally organizer Jason Kessler, who became increasingly unpopular among alt-right figures in the run-up to the rally. And disagreements simmered about who should and shouldn’t speak that weekend.

The dissension is spelled out in text messages and emails made public as part of motions filed in a civil suit stemming from the violence at the Aug. 11-12, 2017 rally. The exchanges also make it clear that organizers were prepared for violence.

The rally, which included a tiki torch-lit march at the University of Virginia, devolved into a riot. A 21-year-old Ohio man, James Alex Fields Jr., is charged with intentionally running down a crowd of anti-racist demonstrators and killing 32-year-old paralegal Heather Heyer. Two Virginia State Troopers who were monitoring the event also died when their helicopter crashed.

Kessler, a virtual unknown among alt-right adherents when he organized “Unite the Right,” turns up frequently in the text exchanges filed in court, sometimes as a participant, sometimes as a subject and not always in a flattering light.

As Kessler cobbled together a speakers list for “Unite the Right,” he courted alt-right frontman Richard Spencer, racist podcaster Michael “Enoch” Peinovich and others to take part.

Spencer initially committed to a speaker slot on June 6, 2017, an agreement that delighted Kessler. 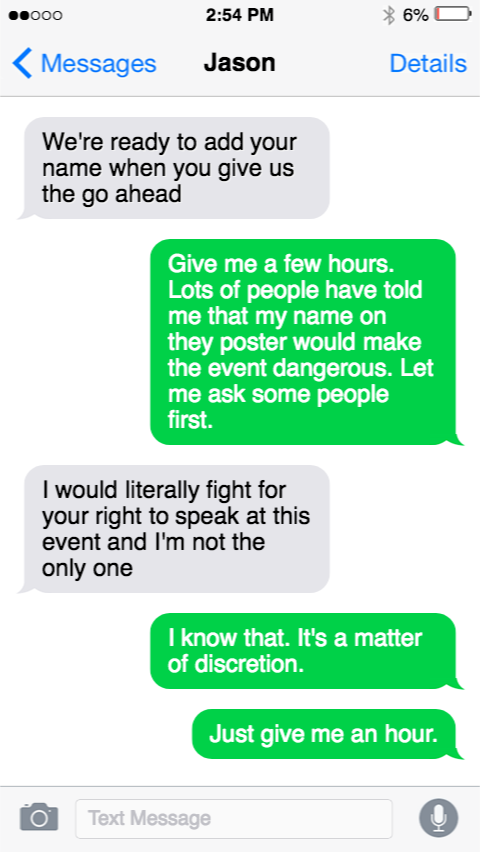 Recreation of text conversation between Jason Kessler and Richard Spencer based on court documents obtained by the SPLC.

“We’re raising an army my liege,” Kessler texted Spencer. “For free speech. But the cracking of skulls if it comes to it.”

For reasons that are unclear, Spencer became hesitant just a few days later. Kessler pressed Spencer in texts on June 15, 2017, about being added to the public list, but Spencer demurred.

“We’re ready to put your name when you give us the go ahead,” Kessler texted.

“Give me a few hours,” Spencer wrote back. “Lots of people have told me that my name on they [sic] poster would make the event dangerous. Let me ask some people first.”

“I would literally fight for your right to speak at this event and I’m not the only one,” Kessler responded. 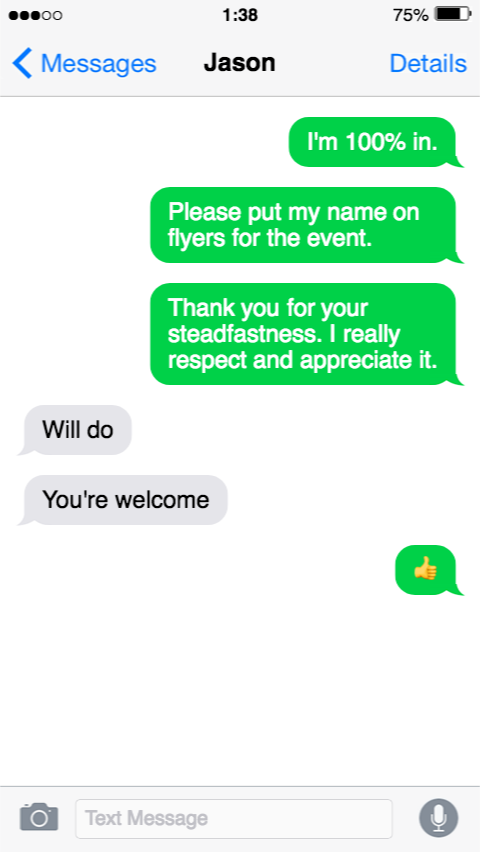 Recreation of text conversation based on court documents obtained by the SPLC.

By the next day, Spencer was on board.

“Thank you for your steadfastness,” Spencer wrote to Kessler. “I really respect and appreciate it.”

‘We need to drop him’

Spencer was leery of Kessler from the beginning, as was alt-right leader Elliott Kline, who goes by Eli Mosley. In text messages, they expressed reservations about Kessler, his commitment to the movement and even the fact that he has a Jewish grandmother.

Kessler held a press conference in front of the Charlottesville Police Department on July 11, 2017, with the Warlocks biker gang to promote “Unite the Right.” At the conference, he claimed white people were being slowly eliminated from the planet.

Days later, Kessler posted a picture of himself at the press conference to Facebook: “Who lives in my area and more or less agrees with me politically? I need applicants to induct into a secret order.”

Kline and Spencer mocked Kessler for both his press conference and social media post afterward in a text exchange on July 28, 2017:

Kline: “On a brighter and funnier note. Look at this ridiculous post Kessler made last night lolol.”

Kline: “I could tell you hours of his stupidity.”

Spencer: “After c ville, we need to drop him. He’s just stupid and weird.” 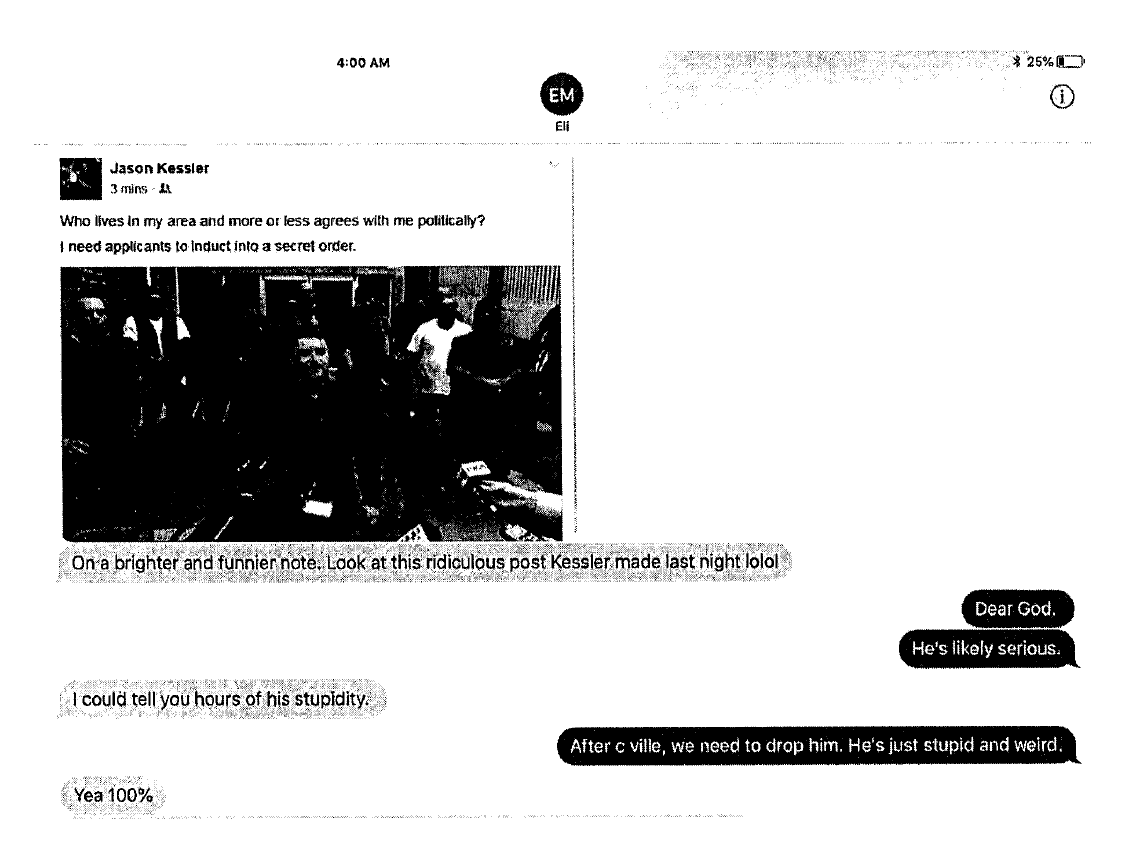 A photocopy of text conversations in court documents obtained by SPLC.

Kessler’s Jewish heritage also became a wedge for Kline and Spencer to use against Kessler after the rally.

“I don’t even think we need to spread it,” Kline wrote to Spencer. “It’s a good enough sword to hold over his head to go away after this.”

After a brief exchange of comments, Spencer replied: “I was right to see his lack of seig heiling as a sign.”

‘Duke is a hydrogen bomb’

Along with finding ways to minimize Kessler, Kline and Spencer discussed the speakers list. Kline noted on July 7, 2017, that career racist David Duke, who has become something of a godfather to the alt-right movement, asked about speaking at “Unite the Right.”

Spencer was hesitant to invite Duke, who has been known to draw a crowd — and steal the spotlight.

“If I’m a nuclear bomb,” Spencer texted, “Duke is a hydrogen bomb.” 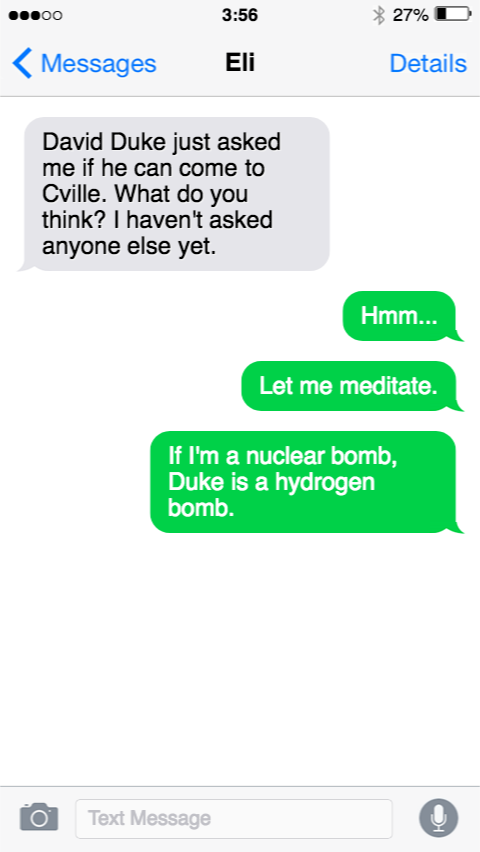 Recreation of text conversation between Eli Mosley and Richard Spencer based on court documents obtained by the SPLC.

In the texts, Spencer said, “First off, I can’t counter signal [Duke.] Secondly, I really don’t have anything against him at all.”

Kline enthusiastically jumped on board.

“I think if we make him a ‘surprise guest’ that would be best too,” Kline texted.

“That would be totally insane,” Spencer wrote back.

Kessler and Spencer discussed the logistics of the post-rally news conference. Kessler proposed they “take it to the enemy” and hold the press conference in front of the Charlottesville Police Department.

Kessler objected to being cut out, but Spencer insisted he not speak publicly.

“Now is not the time for us to be divided,” Kessler texted.

“You should have let us lead,” Spencer responded.

After the rally, as questions arose about the violence that broke out, Spencer and Kline continued to discuss ways to isolate Kessler from the movement and alt-right figures.

“I like it,” Kline replied. “Told him he would get beat up. And he just got beat up.”

After “Unite the Right,” Kessler became a pariah, not only among the alt-right, but in his hometown of Charlottesville. His attempt at a second rally in Washington, D.C., flopped, as Kessler and a small crew of backers were outnumbered by protesters.

Since then, except for occasional appearances in court for lawsuits stemming from the rally, Kessler has faded from public view.

Alt-right figures have had little or nothing to say about him as they continue to try and regroup from “Unite the Right.”