Conservative pundits and far-right white nationalists are blaming the victims for explosive devices directed at liberals and the press.

It might be interesting to start your stopwatches the moment an act of terrorism or mass killing is first reported and note how long it will be until someone on the internet chimes in about how the violence is a “false flag” operation or another nefarious conspiracy of some kind.

In the case of the recent spate of explosive devices mailed to leading liberal political figures and CNN, the stopwatch would have run only a few minutes. Almost immediately, conspiracist websites were posting theories about the “fake bombs.” Some people learned about the bombs by reading the “false flag” theories first.

Within the day, conspiracists and other far-right extremists were competing to cook up the wildest variations on the false-flag theories, as well as to demand investigations into who really sent the bombs, with many implying that the victims sent the bombs to themselves. The meme was especially popular on white nationalist websites.

Milo Yiannopoulos praised the would-be bomber on Instagram, saying it was “disgusting and sad (that they didn’t go off, and the daily beast didn’t get one).”

Even after Friday’s arrest of a Florida man with an apparent background in right-wing activism on charges of, among others, transporting and mailing illegal explosives, the most dogged among these theorizers have clung to their belief that it was all a scheme by nefarious forces to make Trump supporters look bad.

Investigators traced the packages to a postal facility in Opa-locka, Florida.

For the conspiracy-minded, this news was an open invitation to theorize, especially coming in the run-up to midterm elections.

Leading the charge, as usual, was Alex Jones’ Infowars, which posted shortly after the bombs were reported a reminder that Jones had predicted several months ago that “the media would be targeted for attacks that would bolster the narrative that President Trump is inciting violence.” 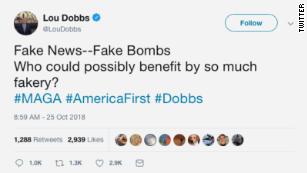 Ostensibly mainstream conservative pundits joined in the skepticism, including Fox Business’ Lou Dobbs, who tweeted: “Fake News—Fake Bombs; Who could possibly benefit by so much fakery?” He deleted it later, and replaced it with a tweet saying: “Fake News had just successfully changed the narrative from the onslaught of illegal immigrants and broken border security to ‘suspicious packages.’ ”

Likewise, popular radio host Rush Limbaugh theorized: "How about a day like this? How about a day like this where you create a scenario where it looks like the mobs are on both sides? It looks like the Republicans have a mob, too, or at least an 'insaniac.' There's some Republican out there sending bombs to decent, good Democrats and media people — former Democrat presidents and the harmless people at CNN.”

Fellow radio host Michael Savage opined, “it’s a high probability that the whole thing is set up as a false flag to gain sympathy for the Democrats... and to get our minds off the hordes of illegal aliens approaching our southern border.” 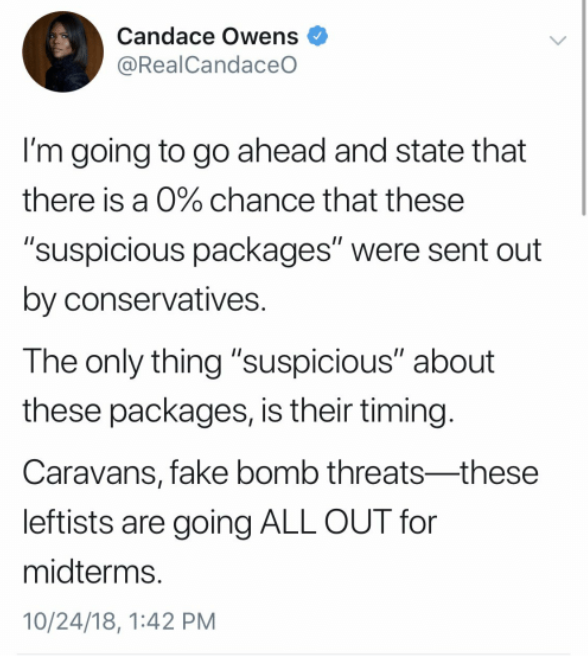 The idea ran even wilder as it spread to more extreme venues. Turning Point USA’s Candace Owens tweeted: “I’m going to go ahead and state that there is a 0% chance that these ‘suspicious packages’ were sent out by conservatives,” she wrote. “The only thing ‘suspicious’ about these packages, is their timing. Caravans, fake bomb threats—these leftists are going ALL OUT for midterms.” She, too, deleted it later.

Frank Gaffney, founder and president of the anti-Muslim hate group Center for Security Policy, was similarly skeptical. “None of the leftists ostensibly targeted for pipe-bombs were actually at serious risk, since security details would be screening their mail,” he tweeted. “So let’s determine not only who is responsible for these bombs, but whether they were trying to deflect attention from the Left’s mobs.”

John Guandolo, a former FBI agent turned anti-Muslim conspiracy theorist, called it a “Marxist counter-state operation” and “the democrats’ Operation Bomb Ourselves.” He did criticize President Trump, though: “For his part, President Trump has failed to purge the government of Obama-appointed personnel/deep-state operatives,” he wrote. “Nor has the President taken Republican leaders to task for treating Marxists, especially Marxist candidates for public office, like ‘fellow-politicians who have differing views’ instead of like willing hostile actors in a war to destroy America’s foundation.” 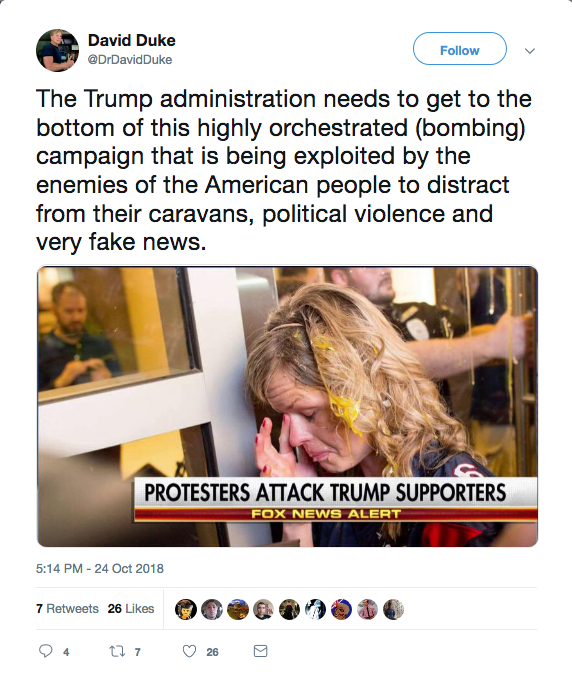 White nationalists in particular were fond of exploring various facets of the “false flag” assertions. David Duke was one of the first to join the parade, tweeting: “The Trump administration needs to get to the bottom of this highly orchestrated (bombing) campaign that is being exploited by the enemies of the American people to distract from their caravans, political violence and very fake news.”

Alt-right neo-Nazi Andrew Anglin, wanted to take things even further at his website The Daily Stormer. Anglin wrote, “There is zero chance that this is anything other than an October Surprise hoax designed to affect the midterm elections,” and named the FBI “the No. 1 suspect.”

Another Stormer writer speculated about where the so-called “#MAGAbomber” would strike next, concluding: “So I expect the harassment of Republican officials to escalate. Soon, Antifa is going to be sending Molotov cocktails into the black SUVs of Republican congressmen. … We’re entering a period of political terrorism, lads. A period of false flags and targeted killings, most likely.” 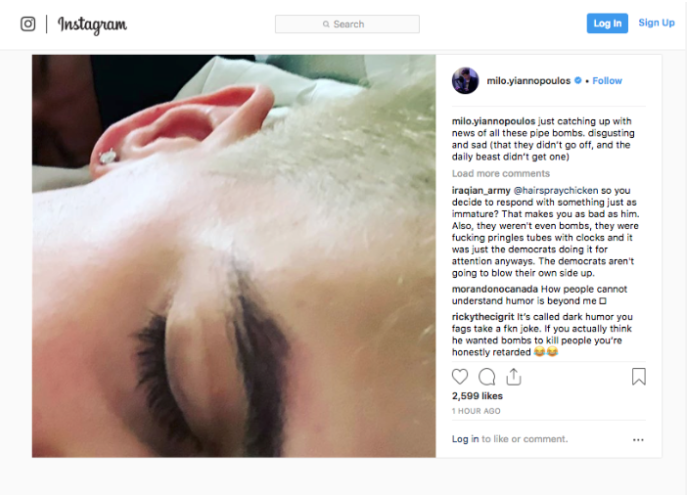 Yiannopoulos decided to outdo them all with his outrageous take lamenting that “the bombs didn’t go off.” After other users complained, Instagram officials initially insisted that the post didn’t “violate community guidelines.”

Eventually, however, the post was removed, and Yiannopoulos complained bitterly: “i need private security whenever i appear in public, but they cry when i make a joke — about a false flag designed to distract us from the democrat funded and organized illegal migrant caravan.” As for journalists, he added that “they are scum and I will not mourn them.” That post was also removed.

Just for the record: Explosive devices like the pipe bombs sent in the mail have long been favored weapons of the radical right in the United States, reflecting its propensity for weapons of mass destruction generally. The use of pipe bombs by right-wing domestic terrorists dates back at least to the 1984 rampage of the neo-Nazi gang The Order, as well as subsequent terrorist plots that emanated from the Aryan Nations compound in northern Idaho in the ‘80s and ‘90s. These included pipe-bomb attacks on the Spokane Spokesman-Review newspaper and a Planned Parenthood clinic in 1996. The man who bombed the 1996 Atlanta Olympics, Eric Rudolph, used pipe bombs in his attacks on abortion providers and gay bars.

More recently, homemade bombs turned up in a spate of cases involving radical-right extremists in 2009-10. These included an older case, from 2004, when neo-Nazis sent a bomb in the mail to the director of the Office of Diversity for the city of Scottsdale, Arizona, and nearly killed him.

On Friday, police arrested a Florida man named Cesar Sayoc in the bombings. When it became apparent that he was an avid Trump supporter and not a probable candidate for a “false flag” operation, most of the mainstream pundits who had voiced doubts about the case have so far fallen silent on the matter, including Dobbs, Owens, Yiannopoulos and Limbaugh. Only Fox Business correspondent Geraldo Rivera, who had also tweeted his doubts, admitted on Twitter that he had “outsmarted myself.”

However, the dedicated conspiracists and white nationalists remained dogged in their insistence that it was all a false flag. David Duke tweeted out a post describing the “hoax bombs never meant to explode” as part of a “Ziomedia effort to stop the Midterm Rep surge and get attention off the invasion of the USA.” Duke also said that Sayoc, who claims Native American ancestry, was being described as white even though he would “fit in perfectly with those in the Caravan Invasion.”

Alex Jones, meanwhile, insisted that Sayoc was a “fake bomb patsy,” and ranted at length on his show that the devices were hoax items that could never explode. (FBI officials at Friday’s briefing on the arrests insisted this was not the case.) At the Daily Stormer, Anglin agreed with Jones.

“He’s a perfect patsy,” Anglin wrote. “What I believe is that they planned this well in advance, found a guy they could either blame it on or get to go along with it. He was the only one that worked.”