But Barnes & Noble still sells his new book, despite not only his sexism,  but also his increasing antisemitic and racist rhetoric. On Wednesday afternoon, it ranked 22nd on their bestseller list. (Thursday it was 59th.)

After PayPal deplatformed him and Amazon took down nine of his books — including first the hardcover and subsequently the paperback of his most recent book, Game — Roosh had to shut down his website, Return Of Kings (ROK), in October for lack of funds. Roosh wrote:

The first factor for this hiatus is that site revenues are too low. We’ve been banned from Paypal and countless ad partners, which forced me to lay off the site editor last year and also lower payments to regular contributors.”

ROK is designated as a male supremacist hate group by the Southern Poverty Law Center (SPLC). A cornerstone of the so-called “manosphere,” ROK gave men advice on how to seduce women, often regardless of their consent. It was rife with misogynistic content and occasionally embraced the talking points of the racist “alt-right.”

Through ROK and his own personal blog, Roosh gained notoriety for his violent misogyny. Notably, in 2015 he proposed to make rape legal on private property (in a hyperbolic post he later claimed was “satire”). In his writings, Roosh has condoned rape, advocating that “no mean no — until it means yes” and disparaging women as “c-- buckets.”

In his books, he shares anecdotes about his sexual encounters he claims are true. Sometimes, these encounters escalate to outright assault. “In America, having sex with her would have been rape, since she couldn’t legally give her consent,” he wrote in Bang Iceland. “It didn’t help matters that I was relatively sober, but I can’t say I cared or even hesitated.” In Iceland, having sex with someone too drunk to consent still legally constitutes rape.

In the aftermath of ROK’s collapse, Roosh was resentful. He wrote:

I played nice after the 2016 meetup outrage. I was careful with my word choices, tried not to go viral, and did not accept interview requests from alt right sources. And yet they banned me from multiple platforms anyway. I got no reward for being a “good boy,” so now my attitude is… f--- them. I’ll do exactly what I want, and when they come from me (sic), I’ll make them earn it.”

After the Pittsburgh synagogue shooting, which took the lives of eleven people and wounded seven others in October, Roosh tweeted:

“It's okay if you happen to miss the details of today’s synagogue shooting: you’ll be reminded of it daily for the next 70 years.”

He then delved into a bizarre conspiracy theory on the shooting, hinting that it was both an FBI inside job and staged by Democrats for political gain. He also called the series of pipe bombs sent to Democratic opponents of Donald Trump a “false flag operation.”

In tweets, Roosh seemed to embrace the racist alt-right narrative that Jews are deliberately attempting to promote multiculturalism, the arrival of refugees and minority voter turnout to replace whites, and has previously written that he believed there was a “war against white people.” This conspiracy theory of “white genocide” reflects the same fixations synagogue shooter Robert Bowers shared on Gab in the days before his attack. 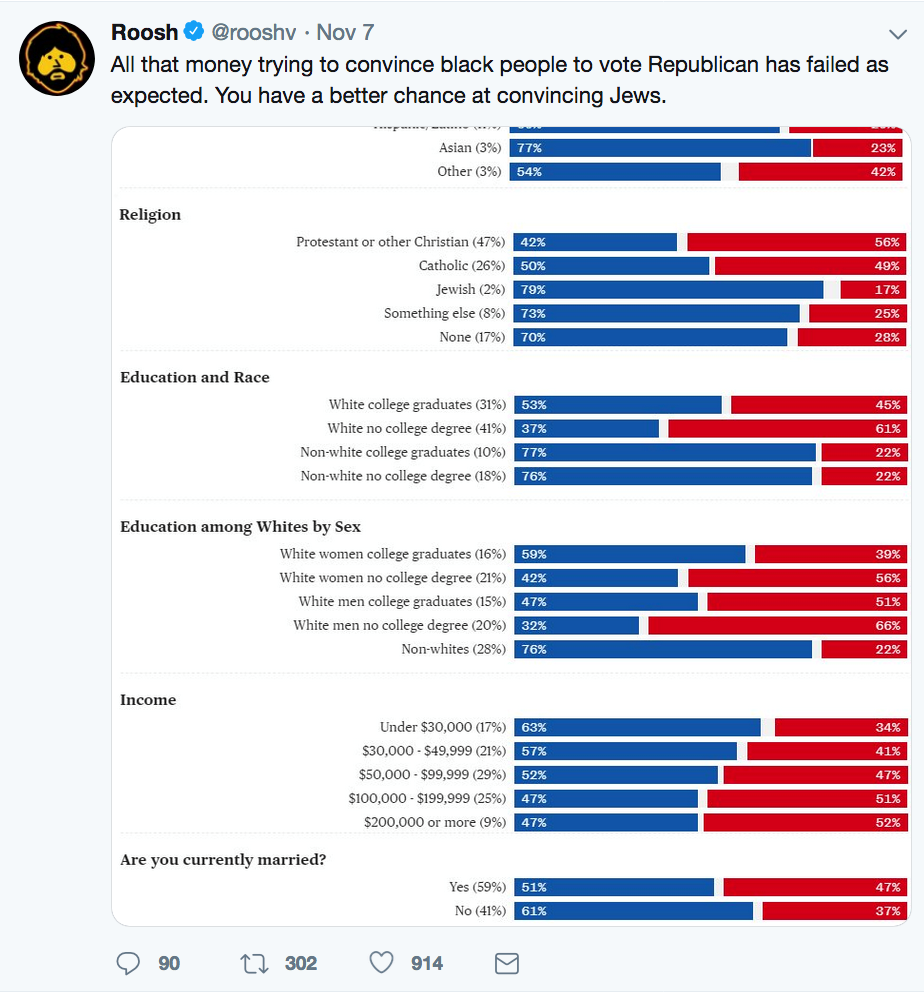 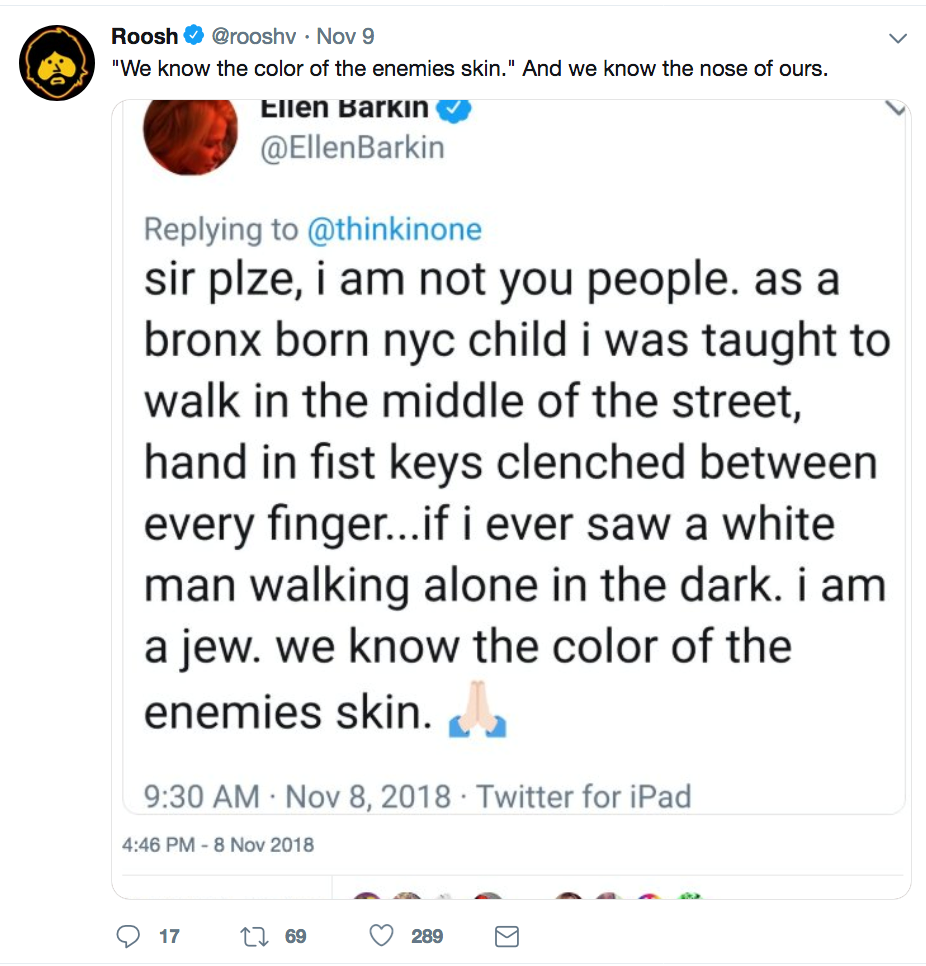 This is hardly the first antisemitic outburst from Roosh. ROK previously published a positive review of a book by career antisemite Kevin MacDonald. And after SPLC listed Return of Kings as a male supremacist hate group, Roosh tweeted, “The Jews are coming after me again.” 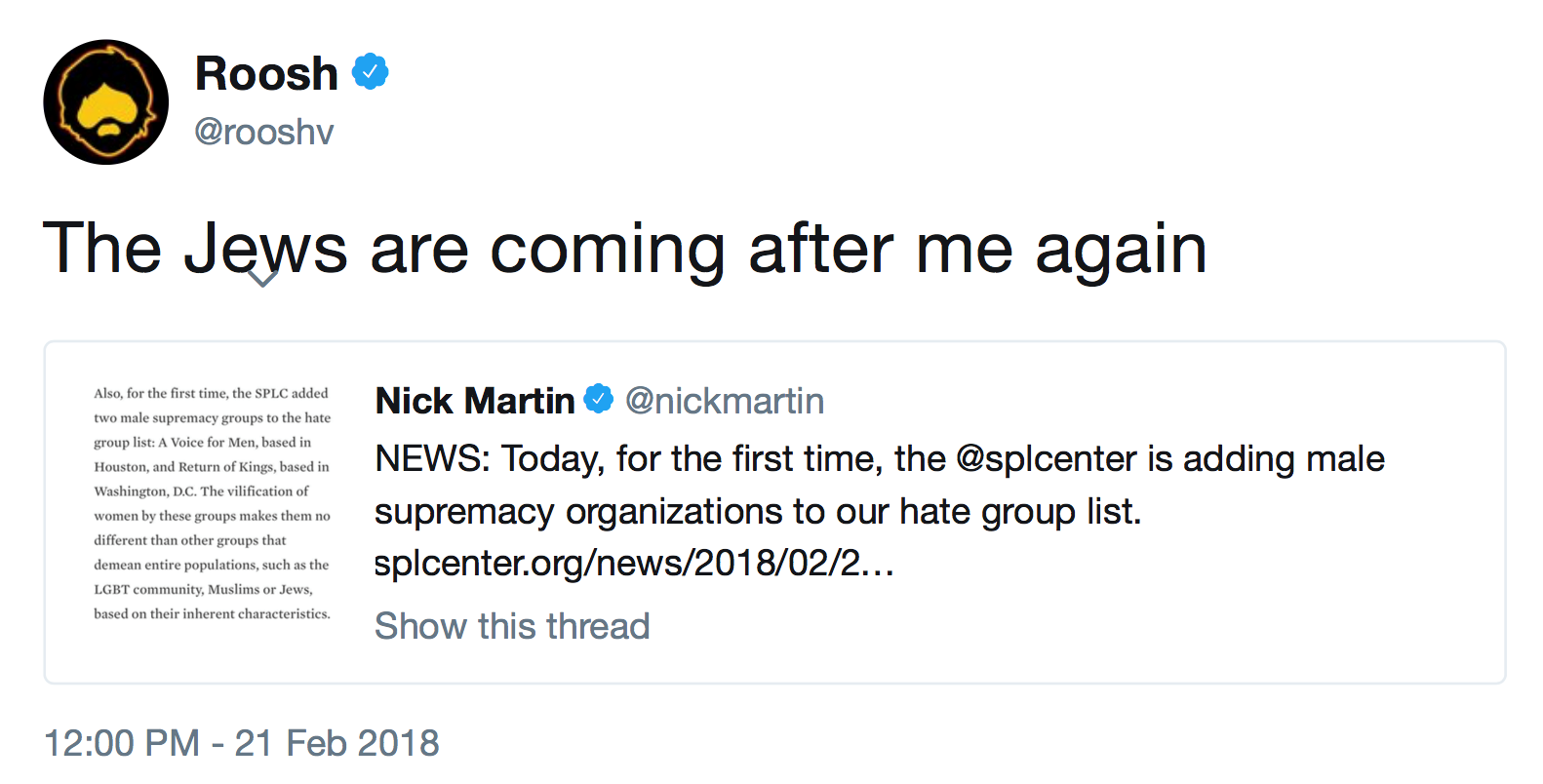 Roosh has also had a relationship with white nationalist Richard Spencer, who was recently accused of physical abuse by his ex-wife. Spencer even invited Roosh to address his white nationalist “think tank,” the National Policy Institute, in 2015. His presence sparked racist backlash from the alt-right who objected to what they considered his non-white heritage. (Roosh is Iranian American.)

On November 14, Roosh and Spencer both appeared on a joint livestream, where they praised one another. Roosh told Spencer, “Richard, we come from opposite sides but we’re being attacked by the same spider.” The video was deleted, but has since been loaded back onto YouTube. 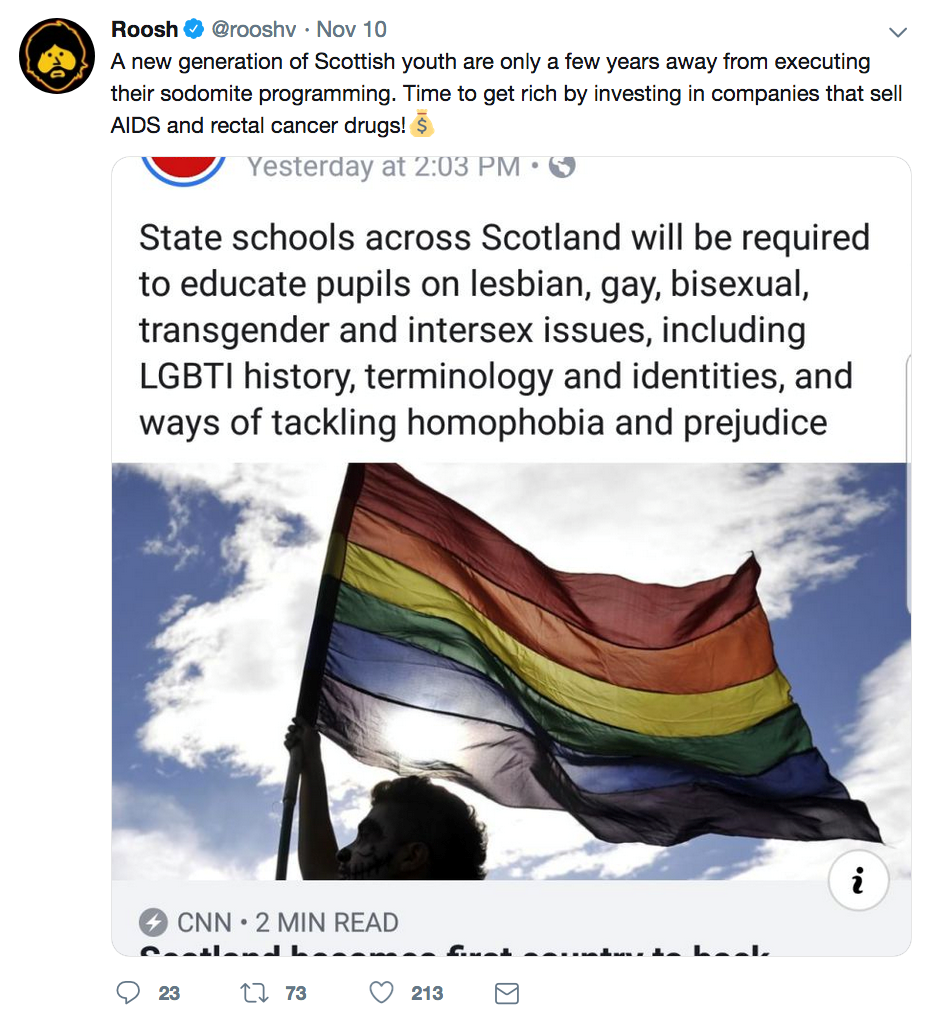 [Pick-up artist] advice not only borders on instructions for committing sexual assault, but frequently crosses that line. Valizadeh himself has admitted to actions defined as rape—though, he defends himself, only under the “feminist” definition.

So why is Barnes & Noble selling the supposed “dating advice” of an infamous pro-rape misogynist and anti-LGBT antisemite with ties to the alt-right? By the time of publication, Barnes & Noble had not responded to a request for comment.