A member of the white nationalist group Patriot Front has been charged in Houston with being a felon in possession of a firearm and body armor.

Cross remained in the Harris County Detention Center on Saturday afternoon. His first court appearance is scheduled for Monday.

Police in Houston said Cross had two guns, Kevlar ballistic helmets and ceramic plate carriers at his home at the time of the arrest.

Cross is a former private in the Army’s U.S. 82nd Airborne Division at Fort Bragg, North Carolina. He was discharged after being arrested and charged in 2007 with selling narcotics and equipment stolen from the Army to an undercover FBI agent posing as a white supremacist. 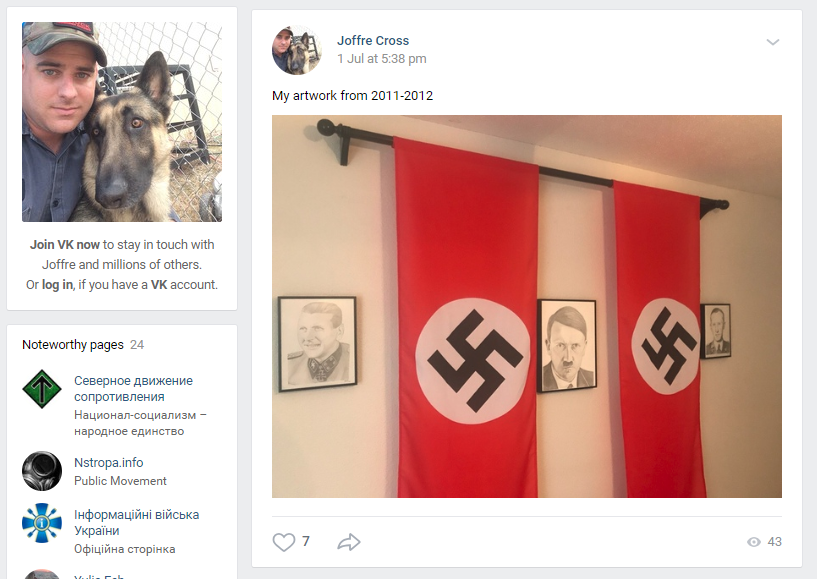 Cross spent five years in federal prison before being released in October 2012.

Patriot Front is a white nationalist group that broke away from Vanguard America after the deadly, racist “Unite the Right” rally in Charlottesville, Virginia. Vanguard America, which helped organize the gathering, became nationally known after the arrest of 21-year-old James Alex Fields of Maumee, Ohio , who marched with the group that day and was convicted of driving his car into a crowd of counterprotesters after the rally, killing 32-year-old Heather Heyer on Aug. 12, 2017.

Cross also has ties to the Aryan Renaissance Society (ARS), a white supremacist group with connections to the racist skinhead scene of the 1990s. ARS and Ken Reed, one of its leaders, organized protests over recent years that brought together racists, including members of Atomwaffen Division, under the so-called “White Lives Matter” banner.

Cross was seen at a speech by alt-right frontman Richard Spencer at Texas A&M in December 2016, providing security along with other white supremacists.

Fears, who faces criminal charges in Texas, was arrested with two others after Spencer’s speech in Gainesville, Florida, on charges that the group shot at someone. The charges on Fears were later dropped. Fears still faces felony charges in Texas.