It was to have been a historic roundup of enemies of the extreme right, ending with Hillary Clinton, former FBI director James Comey, former Attorney General Loretta Lynch, former Senator Harry Reid and a slew of other politicians, jurists and law enforcement officers in the custody of those who would have them tried by “common law grand juries” for their perceived crimes.

The call to action, issued on Facebook on Jan. 1, 2019, read, “Need a minimum of 500 American Militia Freedom Forces Troops of the 2nd Amendment Law, operating under Art.I Sec.8 cls 15 of The Constitution; ‘to execute the Laws of the Union’ to volunteer for the mission to serve The SCOTUS sanctioned Common Law Grand Jury Indictments and bring THE INDICTED to Justice.”

The Facebook group behind the summons to militia members calls itself US Militias and Patriots Action Alerts, and is spearheaded by a 62-year-old Wisconsin man named “Captain” Karl P. Koenigs. In his Facebook signatures, Koenigs identifies himself as “Capt. Karl,” the “National Chairman and Senior Adviser” of the “SOLIDARITY for Ninth and TENTH Amendments COALITION,” an antigovernment sovereign citizen group, and member of “The AMERICAN MILITIA FREEDOM FORCES,” whose responsibility is “to execute the (9th and 10th Amendments and balance of Constitution and Bill of Rights) Laws of the Union, suppress Insurrections and repel Invasions.”

Koenigs used his group to provide enthusiastic assistance and support for the Bundy family’s notorious antigovernment activities in Bunkerville, Nevada, and the Malheur National Wildlife Refuge in Oregon. He also supported the 2018 Ryan Bundy for Governor campaign. Koenigs’ cheerleading earned him further popularity and prominence in the antigovernment Patriot movement, and this indictment project continues to capitalize on it.

The indictment that Koenigs is seeking to have served and enforced comes courtesy of another sovereign citizen group, the National Liberty Alliance, via its “Unified United States Common Law Grand Jury.” It’s dated Feb. 16, 2018, and seeks punishments up to and including the death penalty and life imprisonment for Clinton, Comey, Lynch and the rest for their complicity in the January 2016 death of Robert “LaVoy” Finicum, who was shot by a state trooper during the armed standoff led by Ammon and Ryan Bundy at the Malheur National Wildlife Refuge. 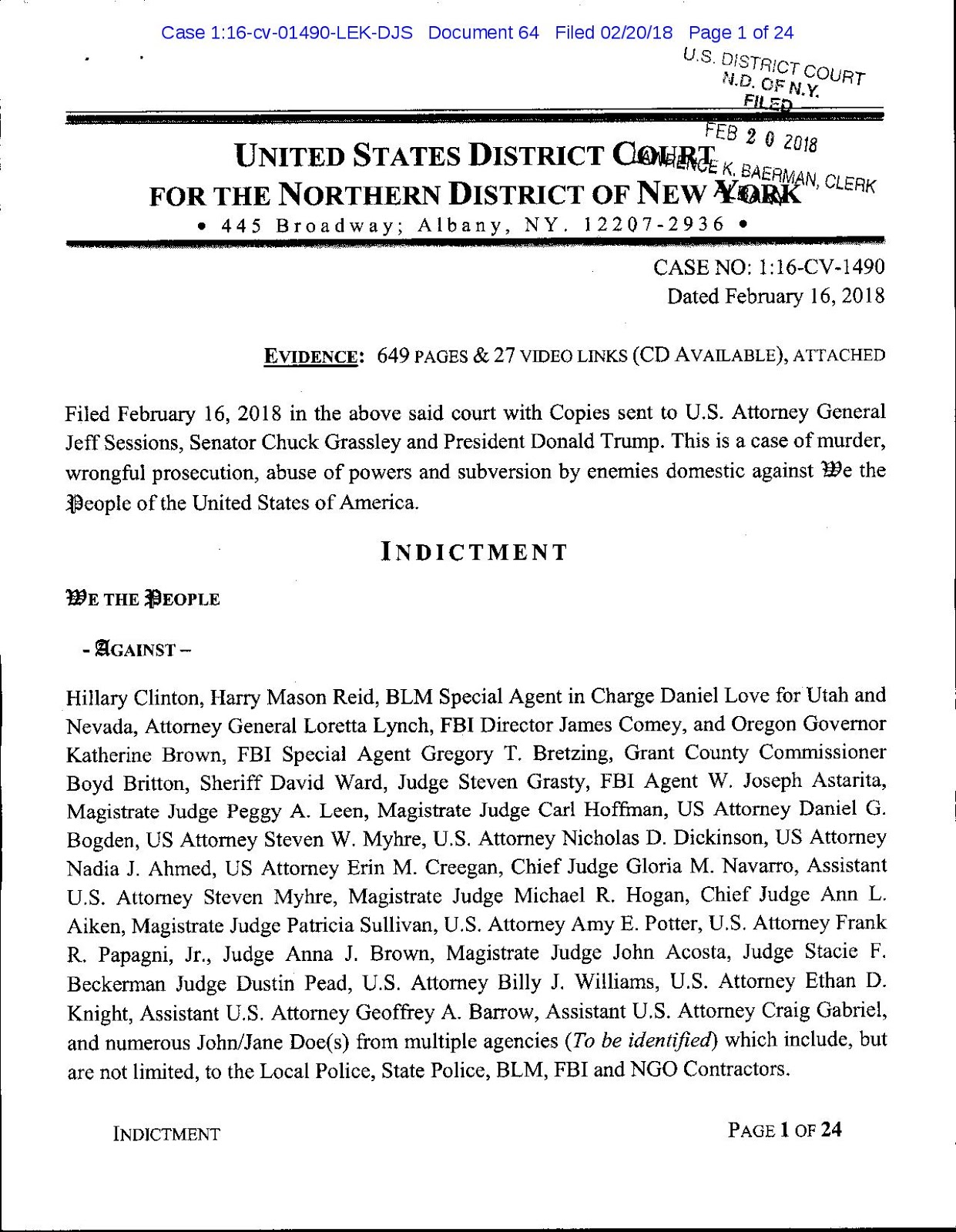 The first page of Koenigs' "indictment," filed in a U.S. district court in New York.

Sovereign citizens espouse a variety of beliefs, but share in common a conviction that the judges, juries, law enforcement and elected officials nearly all U.S. citizens acknowledge are illegitimate. Thus, sovereigns can choose which laws to obey and which to ignore.

Sovereigns are fond of setting up their own “common law courts” or “common law grand juries,” like the one that issued the indictment Koenigs was asking militia members to serve. Sovereigns also use an unconventional weapon against the government: paper. Following the directions of sovereign citizen gurus online, they clog the legitimate court system with documents written in pseudo-legal, nonsensical language. These are sometimes bogus property liens, often filed in retaliation against public officials, intended to ruin the target’s credit rating or instigate an IRS audit. This is known as “ paper terrorism,” and its deployment has led to long prison sentences for its practitioners.

The sovereign citizen movement as a whole is fractious and often woven with internecine strife. Karl Koenigs’ call for militia members to serve the indictments against Clinton and the rest is no different. The National Liberty Alliance and its Unified United States Common Law Grand Jury, which issued the indictment, disavowed Koenigs in a 2016 “Report of Subversion,” concerned he would take just the sort of action he’s calling for in the “2nd Amendment Militia Volunteers to Serve Indictments” Facebook event.

Koenigs at the front

Koenigs also includes the following when signing off on his Facebook posts: “Who Deployed to The Battle of Bunkerville (2014) and to The Malheur Wildlife Refuge Takeover (2016) campaigns to Restore the Rule of Ninth and TENTH Amendment Law and Order.”

In April 2014 at his ranch in Bunkerville, Nevada, family patriarch Cliven Bundy led hundreds of armed, far-right militants, including Koenigs, in defying a federal government effort to seize his cattle. Bundy owed more than $1 million in fees and fines accumulated over the years for grazing his cattle on public lands, but he employed sovereign citizen rationale in refusing to pay the fees.

Thus, the federal Bureau of Land Management (BLM) led a roundup of Bundy’s cattle in lieu of the payments he’d owed since 1992. Ryan Payne of Montana offered Bundy the services of a national militia network he led, Operation Mutual Aid, to help him oppose the roundup, and Bundy accepted. Antigovernment extremists responded in force, eager to face off with the feds. Koenigs traveled to Bunkerville from his home in Marinette, Wisconsin, to join his fellow Patriot movement members.

The standoff came to a head on April 12 (and was eventually dubbed “The Battle of Bunkerville), when Bundy ordered his motley crew of militants to take back about 900 cattle from the feds. With assault rifles trained on them from tactical positions, the BLM agents retreated, the cattle were freed and the antigovernment activists reveled in their victory.

In January 2016, two of Cliven Bundy’s sons, Ammon and Ryan, along with militia leader Payne, traveled to Oregon to protest the re-incarceration of two local ranchers, Dwight and Stephen Hammond, who’d been convicted of arson on public lands. The courts had determined that the Hammonds’ initial sentence was too lenient under federal law and ordered their re-sentencing.

The Hammonds asked the Bundys and others who’d traveled there to return home, and they reported to prison to serve their time. But the Bundys and their crew didn’t listen, and instead the group of heavily armed, far-right militants occupied the Malheur National Wildlife Refuge.

During the Malheur occupation, Koenigs was part of the “Alpha” security team and designated “A1.” Even now, among his many designations in his Facebook signature is “THE A-TEAM.”

On Jan. 26, Robert “LaVoy” Finicum ran a law enforcement roadblock and nearly ran over an FBI agent at a second roadblock before running his vehicle into a snowbank and fleeing the vehicle. Finicum was shot and killed by a state trooper when he attempted to draw his gun.

The occupation would continue until Feb. 11, when the final four Malheur occupiers were arrested. But Finicum’s death would continue to reverberate for antigovernment militia members and sovereign citizens. The shooting of Finicum is the basis for the indictment issued by the National Liberty Alliance’s Unified United States Common Law Grand Jury that Koenigs called for militia members to serve.

Koenigs wasn’t among those arrested and charged at Malheur, but his rap sheet includes several weapons charges and failure to produce identification.

On April 25, 2016, the sovereign citizens group National Liberty Alliance issued its “Report of Subversion” regarding “Captain” Karl P. Koenigs. Supposedly delivered to “Federal Judiciary (94 districts) and all fifty State Governors, via U.S. Postal Service; County Sheriffs & US Marshals via fax and e-mail,” it warns “that agents provocateurs have been fueling a quasi-shadow government movement that essentially advocates the overthrow of the government.”

The report warns of Koenigs, along with other prominent sovereign citizens including Colorado “Judge” Bruce Doucette (now serving a 38-year sentence for paper terrorism), who “together claim the forming of a [subversive] grand jury [if twenty-five (25) people were actually called to form such jury] for indictments and arrests of elected and appointed officials.”

About a week or so ago NLA leadership was approached via phone by Captain Karl P. Koenigs (who it appears has been wooing NLA leadership for subversive purposes) in an effort to nudge the UUSCLGJ to provide to this quasi-shadow government movement indictments against elected and appointed servants in Oregon so that said movement could then utilize the militia presumed under the leadership of Captain Karl P. Koenigs to arrest (kidnap) said servants and house them in undisclosed places. NLA rejected the diabolical plan immediately and advised Koenigs that he should cease and desist from any such unlawful activities. Captain Karl P. Koenigs appears to have rejected NLA’s counsel and appears to be proceeding without the UUSCLGJ. This action by Koenigs and our knowledge of its subversive nature require by duty and law that the UUSCLGJ report immediately to some Governor or Judge such knowledge, which is the purpose of this Information.

This was a warning from the NLA that Koenigs was likely to do exactly that which he was asking his “2nd Amendment Militia Volunteers” to do on his Facebook event – serve the indictments that the UUSCLGJ had issued.

Two days after the request for militia volunteers to serve indictments first went up on Facebook, Koenigs posted:

Need the numbers, 500 American Militia Freedom Forces Troops or more, to avoid shooting! We want this serving of the Grand Jury True Bill to Hillary Clinton, current and fired, FBI/DOJ treacherous enemies of The Constitution, CORRUPT Federal and County Judges to be bloodless if at all possible!

Koenigs’ call for militia volunteers remains on Facebook, with an end date of Feb. 21. But Koenigs seems to have paused the effort, for now.

MILITIA ON HOLD! Regarding the Hillary Clinton, James Comey, Loretta Lynch, FBI/DOJ/BLM and many others surrounding the UraniumOne Deal and execution of LaVoy Finicum Grand Jury Presentment, Several States are involved. We are taking the investigation work, some in the known indictment, dissecting it and altering the document for Public Record. The American Militia Freedom Forces are now on a stand down order until several State Common Law Grand Juries are finished with these investigations.