Brenton Tarrant, the man accused of murdering 49 worshippers and injuring dozens of others in two New Zealand mosques Friday, posted a manifesto steeped in white supremacist propaganda and references to “white genocide,” a belief that white people are being systematically replaced across the world by non-whites. 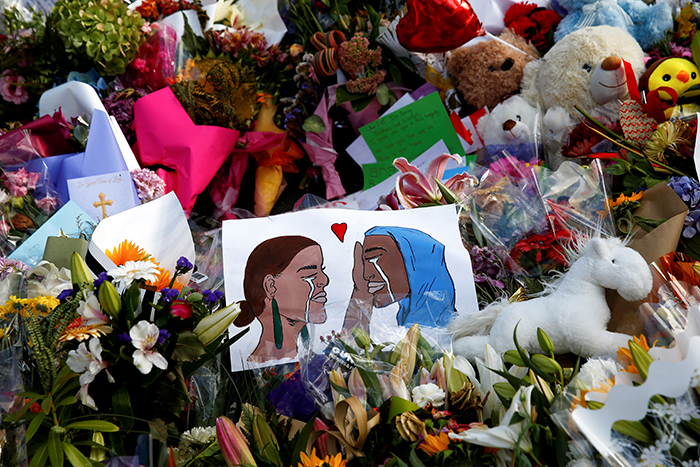 Flowers and cards are seen at the memorial site for the victims a March 2019 mass shooting, outside Al Noor mosque in Christchurch, New Zealand. (Photo via Reuters/Edgar Su)

The type of racist rhetoric found in the manifesto is promoted heavily by Americans with large platforms like Rep. Steve King of Iowa and Tucker Carlson of Fox News.

Closer to where the apparent terror attack took place, such rhetoric is promoted by Sen. Fraser Anning, a member of Australia's right-wing “One Nation” party, who released a statement blaming the murders on Muslims, who were the victims of the attack.

Tarrant, a 28-year-old man from Australia, titled his manifesto “The Great Replacement.” This term can be traced to the French writer Renaud Camus. Influential on the racist right, Renaud is sometimes credited with inspiring the now infamous “Jews will not replace us” chant voiced by white nationalists and neo-Nazis on Aug. 11, 2017 in Charlottesville, Virginia, on the eve of the deadly “Unite the Right” rally.

Lauren Southern, a Canadian far-right conspiracist who commands a large audience on YouTube, posted a video called “The Great Replacement” in July 2017, which was viewed over half-a-million times on Facebook and shared more than 7,000 times. Southern and racist alt-right YouTube performer Stefan Molyneux attempted to give a talk in New Zealand in August 2018, but the people running the venue cancelled the event after being swarmed by high-profile critics, including Jacinda Ardern, the country’s prime minister.

The killer used an image that circulated heavily on the say-anything forum 8chan for the cover of his manifesto, a pie chart made up of components that white supremacists and fascists worldwide recognize as necessary for the existence of a healthy society. The components include such concepts as “Ethnic Autonomy,” “Environmentalism” and “Protection of Heritage and Culture.” The chart’s components extend out from the black sun symbol, or “schwarze sonne,” at its middle. The black sun, which was cherished by Himmler’s SS, is an ambiguous, esoteric symbol favored by a variety of fascists. Andrew Anglin, the editor of the Daily Stormer, has the same symbol tattooed on his chest.

David Duke posted a version of the same meme used on the cover of the alleged killer’s manifesto from his Twitter account @DrDavidDuke on February 9. “Soon …,” Duke wrote.

In the manifesto, the accused terrorist alludes repeatedly to the far-right ecosystem of online propaganda. Shortly before the shooting, a post apparently from Tarrant was made on the far-right forum 8chan. It read, “It’s time to stop shitposting and time to make a real life effort post.” “Shit posting” and “effort posting” refer to slang describing short and long pieces of writings on 8chan and similar forums.

In his manifesto, Tarrant elaborated:

Whilst we may use edgy humour and memes in the vanguard stage, and to attract a young audience, eventually we will need to show the reality of our thoughts and our more serious intents and wishes for the future. For now we appeal to the anger and black comedic nature of the present, but eventually we will need to show the warmth and genuine love we have for our people.

Rhetoric reminiscent of “Siege,” Iron March and others

The alleged killer also espoused a belief in “accelerationism,” the idea that violence should be used to push Western countries into becoming failed states. Adherents hope the collapse will give rise to radical, presently unthinkable changes in our society.

Accelerationism is pushed heavily by admirers of the book Siege, a racist and pro-terrorism manifesto published over multiple years as a newsletter by neo-Nazi James Mason. It’s also a belief system that was promoted heavily on the neo-Nazi forum Iron March, users of which are linked to murders and terrorism in multiple Western countries.

“Stability and comfort are the enemies of revolutionary change,” the New Zealand manifesto claims. “Therefore we must destabilize and discomfort society where ever [sic] possible.”

The killer also added text to the manifesto that links directly to propaganda found on Iron March. The killer wrote, “KILL YOUR LOCAL DRUG DEALER,” an impulse encouraged by the radical, terroristic neo-Nazi group Atomwaffen Division.

“Both illegal and legal drug dealers are our racial enemies, ruining the health, wealth, family structure, culture and future of our people,” the manifesto declared. “These peddlers of filth are active in every nation and behave without any thought of their impact on their societies.”

The rhetoric used in the manifesto showcases a strong anti-capitalist, anti-global economy bent, which not only is common on Iron March, but also has been advocated by American antisemite Matthew Heimbach’s Traditionalist Worker Party. Michael Peinovich’s The Right Stuff podcast network has also increasingly embraced language that melds themes of building a state for only white people with anti-capitalism in recent months.

“They will soon realize there are repercussions to being a race traitors [sic],” the manifesto declares, referring to people who work in finance. “These repercussions will hit them hard, fast and without mercy. If they flee we will follow them, if they hide we will find them, if they try to shield themselves behind the state we will break through and reach them.”