None of that was present during its thirteenth convention, held March 29–31 at the 17th-century Palazzo della Gran Guardia in Verona, Italy.

Rather, Verona focused on attempting to influence civilization through the lens and language of theocratic “pro-family” rhetoric. Speakers touted a redemptive, homogenous and tight-knit heterosexual society in each nation and painted progressives as intolerant of ideological difference.

Speaker after speaker used similar talking points, voicing how important “the family” is to the survival of Europe and to sovereign European nations. They lamented low European birthrates while dog whistling against immigration in some instances and celebrating a strict gender binary in others. Several speakers talked about economic and social policies that would benefit heterosexual families, such as tax breaks for each child born.

The gathering, which generally serves as a networking and strategy nexus for lawmakers, activists and religious officials, also seemed to be operating as an unofficial campaign platform for European Parliament elections in May, which some of the European speakers seemed to hope will help install more right-wing politicians into the body.

“We will win in the next European elections,” Claudio D’Amico said during his remarks at the event. “The pro-family will be the majority in the European Parliament.” D’Amico is a member of the right-wing Lega Party, currently in power in Italy, and serves as an advisor for the party’s “strategic international activities.” He was also on WCF Verona’s executive committee.

More than 30,000 protested the WCF agenda. Planners of the convention, titled “The Wind of Change: Europe and the Global Pro-Family Movement,” reacted to the increased protests and attention by limiting media access while speakers from the Christian and nationalist right often struck defiant tones to cheers and ovations, decrying “fake news” and “the liberal media.”

WCF also attracted more extreme elements of the right, including Forza Nuova (FN), a neo-fascist group, which has an office in Verona. FN claimed March 28 it would be participating in the WCF, but there is some question as to whether it was in an official capacity. FN Verona chief Pietro Amedeo stated in ansa.it, “We’ll take part in the wonderful March for the Family and the work of the congress.” The march occurred Sunday, but FN held a press conference in front of the WCF venue Saturday and used the gathering as a backdrop to push making abortion illegal.

U.S.-led sessions failed to inspire, while Italians electrified the crowd

American participants, a minority, were overshadowed by the more organized and numerous Italian and European participants. Peter Sprigg of the anti-LGBT hate group Family Research Council spoke in support of conversion therapy on the first day. His panel, which included two other Americans, had sparse attendance.

Sharon Slater, of the anti-LGBT hate group Family Watch International, fared a little better with attendance at her presentation the second day regarding the “dangers” of comprehensive sexuality education, which she argued is “sexualizing children” and is part of an “agenda” pushed by the International Planned Parenthood Federation.

Italian speakers from the hard right, however, electrified the crowd on the second day.

The charismatic Giorgia Meloni, head of the far right Brothers of Italy and former minister of youth under Silvio Berlusconi’s fourth government, was among those skilled in rousing the masses. Meloni launched her campaign for Italy’s general election last year (she was not elected) in the city of Latina, founded by Benito Mussolini’s regime in 1932.

Meloni’s remarks electrified the crowd, launching a display of raucous cheering and applause reminiscent of political rallies. “I defend the family founded on matrimony even if not married,” she said, “and I do not demand privileges and rights reserved for married couples.” 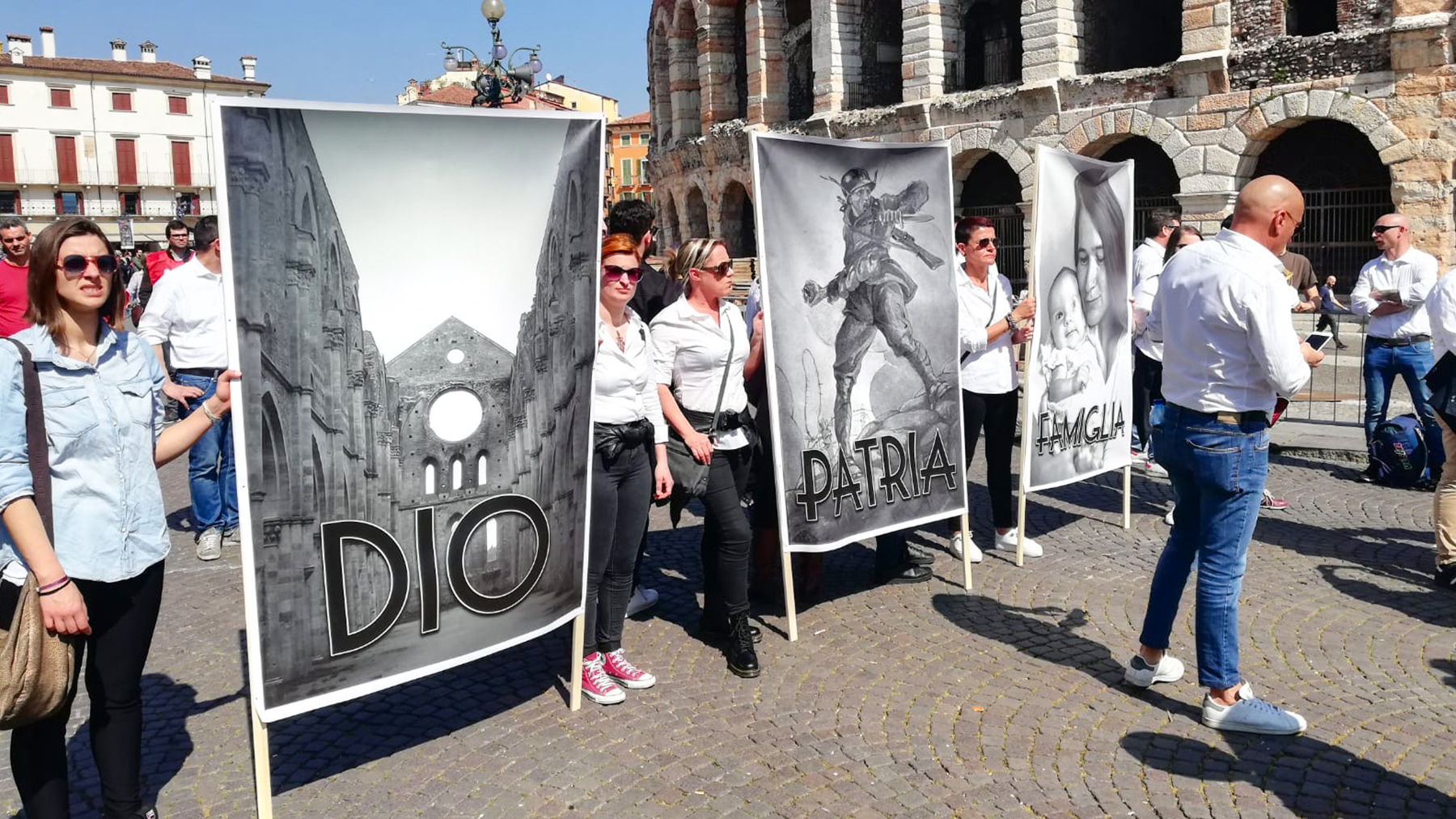 Meloni also slipped in the Mussolini-era fascist slogan “Dio, Patria, Famiglia” (God, country, family) when she said she wanted to defend all three of those, a remark greeted with more cheers and applause.

Matteo Salvini garnered long-lasting cheers and applause, as well. He brought in most WCF talking points, mentioning low birth rates in Italy and keeping migrants in their countries of origin. He also voiced support for “the family” and for “mamma and papa.” He also got a dig in with regard to the right-wing conspiracy of “gender ideology,” which posits that there’s a plan among LGBTQ activists, feminists and “globalists” to “erase gender.” “Males are males and females are females and play with the games they always play with,” Salvini declared. The venue quickly emptied after his speech as people tried to catch a glimpse of him as he left.

WCF Verona wrapped up with a declaration, something the organization releases after each gathering that provides themes from the conference and issues they wish to continue to address.

This year, the declaration included: a call for an international ban on surrogacy, a remedy for demographic winter (low European birthrates), the rights of children to have a mother and a father, the right for children to develop a sexuality consistent with biology, and to be protected from sexualization and child pornography. The declaration also included an affirmation that parents have fundamental rights and duties to choose their children’s education, an acknowledgment of the growth of the homeschooling initiative at WCF and its networks.

The event formally ended Sunday afternoon with a “March for Families,” at which several people carried banners adorned with “Dio, Patria, Famiglia.”

Alexey Komov, WCF’s Russian representative, made some brief remarks at the end of the conference, stating that WCF is working on government levels in Moldova, Italy and Hungary.

Nowhere has that been more apparent than in Verona.