The brother of white nationalist U.S. State Department Official Matthew Q. Gebert reported him to the FBI in July over concerns about his radicalization, he told Hatewatch.

Michael Gebert, 30, told Hatewatch that he reported his older brother through the electronic tip form on the FBI’s website on July 2, 2019, over concerns about his role in the State Department – relative to what he believes to be his brother’s white nationalist ideology.

“I saw so much evil in my brother, I could not f------ deal with it,” Michael Gebert told Hatewatch. Michael Gebert detailed, from his apartment, what led him to contact authorities.

Michael Gebert said the depths of Matthew Q. Gebert’s radicalization became apparent in a confrontation they had in the summer of 2018 at a family gathering hosted in the Pocono Mountains of Pennsylvania. There, the two brothers consumed alcohol, he said, and Matthew Q. Gebert spoke about Jews, immigrants and other minorities in terms that frightened him.

“I ran crying into the darkness,” Michael Gebert said of the 2018 confrontation.

Michael Gebert told Hatewatch that he drank “20 ounces of St. Ides” malt liquor to find the courage to submit the tip to the FBI.

“I love my brother,” Michael Gebert told Hatewatch, underscoring his internal conflict in reporting him to the FBI. “My brother will make it through this.”

Hatewatch reached out to Matthew Q. Gebert by email for a comment on this story, and he did not immediately reply. 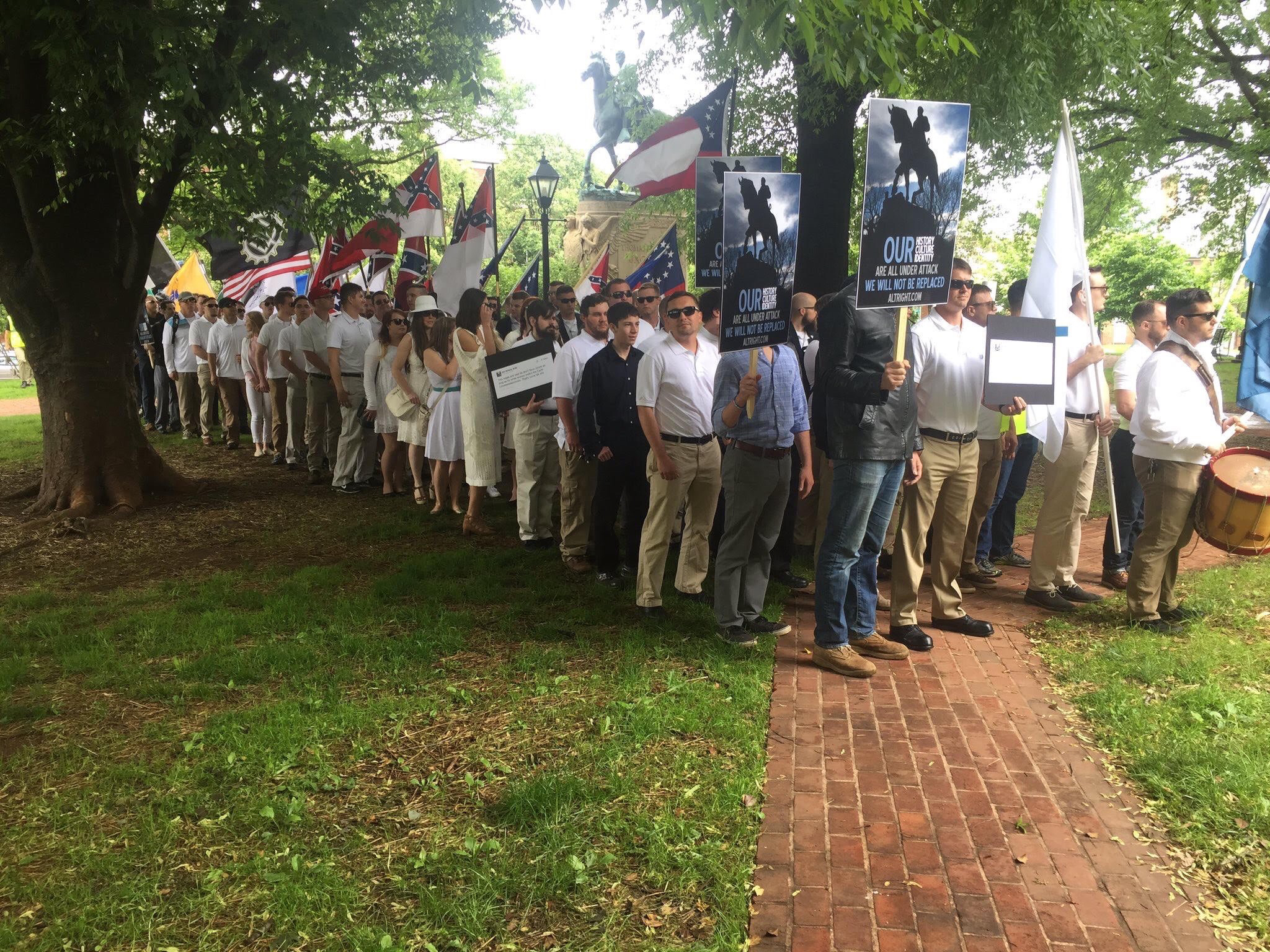 U.S. State Department official Matthew Q. Gebert, standing in front of the person in black, is pictured here in Charlottesville, Virginia, in May 2017. The rally was staged by white nationalists.

Michael Gebert confirmed the photo of a man participating at a white nationalist event in Charlottesville, Virginia, in May of 2017 published by Hatewatch on Aug. 9, 2019, was of his brother. He also listened to “Coach Finstock” talking about his views on a podcast recorded with “alt-right” internet personality “Ricky Vaughn” in February 2018 and provided additional verification of his voice.

“I take these risks [with my life] because I have a grave sense of foreboding that this country and all the white countries on earth are on a collision course with perdition,” Matthew Q. Gebert said as “Coach Finstock” on that show. “The only reason I am taking this risk is so that my kids can grow up in a whiter country if not an actual explicit white exclusionary country at some point in their lives.”

Gebert went on to say that the options to achieve that goal were to enact what he called a “slow cleanse” or wait for social collapse.

Michael Gebert described these views as being “stupid,” as he listened to his brother’s voice.

From hip-hop in high school to ‘evil’ white nationalism

Michael Gebert described his brother as a liberal-minded student with one of the most promising minds at Sterling High School in Somerdale, New Jersey. The account of his brother’s intelligence, open-mindedness and aptitude for accumulating knowledge about world affairs is backed up by at least one other graduate of Sterling High School, who spoke to Hatewatch but asked not to be named. 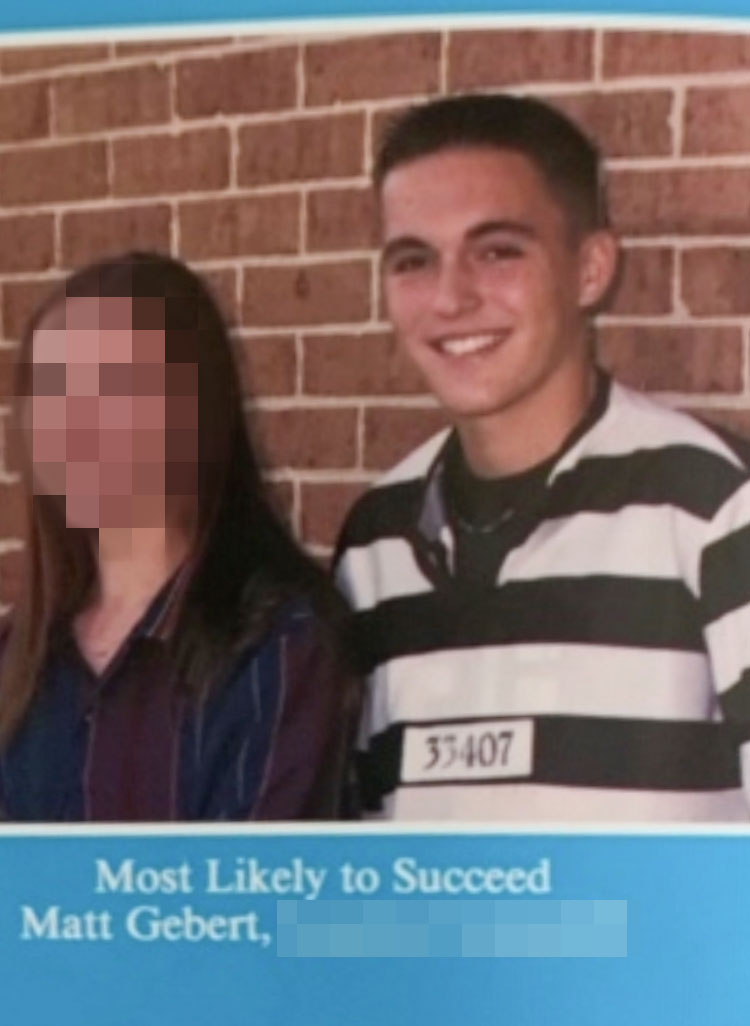 US State Department official Matthew Q. Gebert was featured in his high school yearbook in 1999.

A picture from the 1999 Sterling High School yearbook submitted to Hatewatch by another source wishing to remain anonymous also backs up the account. The yearbook lists Matthew Gebert under the category “Most Likely to Succeed.”

Michael Gebert said his brother listened to hip-hop in high school. Most notably, Matthew Gebert enjoyed the music of the New York-based rap group Wu-Tang Clan, he said. His taste in music at that time is notable in part because all the members of Wu-Tang Clan are black.

“Matt turned me on to so many good musicians,” Michael Gebert told Hatewatch.

Less than two decades later, Matthew Q. Gebert said through his “Coach Finstock” persona on a May 2018 white nationalist podcast called “The Fatherland” that black people “do not belong around [white people] for an ocean at least.”

Matthew Q. Gebert also participated in a student exchange program that sent him to Ukraine during high school, according to his brother. The experience would be the first of multiple trips to Eastern Europe throughout his life, according to multiple sources who reached out to Hatewatch for this story.

Years later, when Gebert was producing white nationalist propaganda under the pseudonym “Coach Finstock,” Vuckovic was doing the same thing under the name “Wolfie James,” Hatewatch reported in its Aug. 7 report.

Vuckovic, who is Serbian, according to her brother-in-law and family friends, “holds a BS degree in Communication Studies from Northwestern University and also attended the International University of Moscow in the Russian language and Civilization Studies Program,” according to an early bio in a trade publication.

A different friend of Gebert who met them on their study abroad in Moscow said Gebert had an interest in “Slavic culture.”

“When I saw he married that woman Anna, I thought – well, that makes sense,” the source wrote over Twitter’s direct message service. “He always had a thing for Slavic culture after our trip.”

Gebert, using the byline Robert Finstock, wrote in a 2017 blog post for the white nationalist publisher Counter Currents that American whites should ally with Russians along racial lines. The post, “A Northern Alliance: Our Ultimate Salvation,” has since been deleted, but it was archived.

“Putin has also offered conciliatory remarks towards the West, despite the constant unhinged invective lobbed at him by Western politicians and the Lügenpresse,” Gebert wrote as Robert Finstock, using a German Nazi-era expression meaning “lying press.” “Western Europeans and Russians share the same enemies and a close racial heritage. The Russians are open to rapprochement, and Western leaders liberated from the Jewish yoke can bury the hatchet with Russia in the coming years.”

Matthew Q. Gebert and Anna Vuckovic married in 2007 in Chicago, according to Michael Gebert.

Fallout from story is global and local

Anna Vuckovic’s name appeared on the website Visit Loudoun as Anna Gebert, vice chair of the board of directors as of Aug. 7, 2019, according to archives. Visit Loudoun is a website devoted to tourism in Virginia’s wine country. Loudoun is the name of the Virginia county where Gebert and Vuckovic live.

Someone removed the name Anna Gebert from the Visit Loudoun website in the aftermath of Hatewatch’s report, which was published that day. Hatewatch reached out to Visit Loudoun for a comment but did not receive a reply.

A neighbor contacted Hatewatch to say they saw Matthew Q. Gebert in his driveway with a gun on his waist on Aug. 7, 2019, immediately following the publication of the Hatewatch investigation. The neighbor provided a photograph to Hatewatch of a man carrying what looks like a gun on his waist at the house Hatewatch visited in June for this investigation. Gebert is entitled to carry a legally purchased gun openly in Leesburg where he lives, according to Virginia state laws, but the neighbor told Hatewatch that the neighborhood is concerned about an armed white nationalist living nearby.

The neighbor sent a screenshot of a notice from the homeowners’ association calling for a meeting on Aug. 27, 2019. The notice lists “Removal of Matthew Gebert” as the purpose for the meeting.