Greene’s rise appears to have started in February when she livestreamed various encounters on Facebook. She uses a cheery persona and smiles to sugarcoat a message of intolerance toward different targets – all based on the opportunity for publicity.

In a two-day span that month, Greene accused U.S. Rep. Maxine Waters of “inciting violence against MAGA patriots,” touted a petition to impeach House Speaker Nancy Pelosi and accused Rep. Ilhan Omar of marrying her brother so he could gain U.S. citizenship.

In all cases, the videos resulted in a spike in online interest in Greene and her anti-immigrant, anti-Muslim musings. She’s used hate-mongering stunts to gain attention, going as far as ridiculing a survivor of the Parkland, Florida, high school shooting that left 17 students and staff members dead. These episodes have propelled the political novice in her run for Congress, and she reportedly placed second in a straw poll for the Republican nomination at an event in Cobb County, a key part of the 6th District.

﻿At Greene’s request, Hatewatch sent questions to her for comments on this story via email, but she did not respond by press time. ﻿Neither the Georgia Republican Party nor Cobb County GOP returned repeated requests for comment.

﻿However, it appears state and local Republican officials are keeping a close eye on views that are out of the mainstream. According to The Atlanta Journal Constitution, party officials pressured candidate Donnie Bolena to get out of the 6th District race after he self-identified as a white nationalist. A state GOP official declined comment to the paper about Bolena’s exit.

She’s married to Perry Greene, and they have three children. Perry and Marjorie Greene are listed as the president and vice president, respectively, of Taylor Commercial Inc., a general contractor in Alpharetta, Georgia, on the company’s LinkedIn page.

Before 2017, Greene had little presence on social media; her Twitter account and at least two of her Facebook pages were established that year or later. But since then, she’s transformed herself into an avid MAGA activist who frequently attends rallies or participates in protests that aim to vilify the federal government, American Muslims and transgender people.

Among these was the 2018 pro-Trump rally known as the Mother of All Rallies in Washington, designed to unite moderate fans of President Donald Trump with more fringe groups on the far right. The original event in 2017 provided a platform for the self-described "Western chauvinist" Proud Boys and antigovernment groups such as the Light Foot Militia and Oath Keepers. Greene attended the “We Will Fund That Wall” in Washington in February, with the goal of urging the Trump administration to build a wall on the southern border. Greene, who mistakenly equates the trans community with drag queens, also protested a local “Drag Queen Story Time” event at a library to push back against what she has called the “brainwashing” of children.

In December, Greene appeared at the American Priorities Conference in Washington. 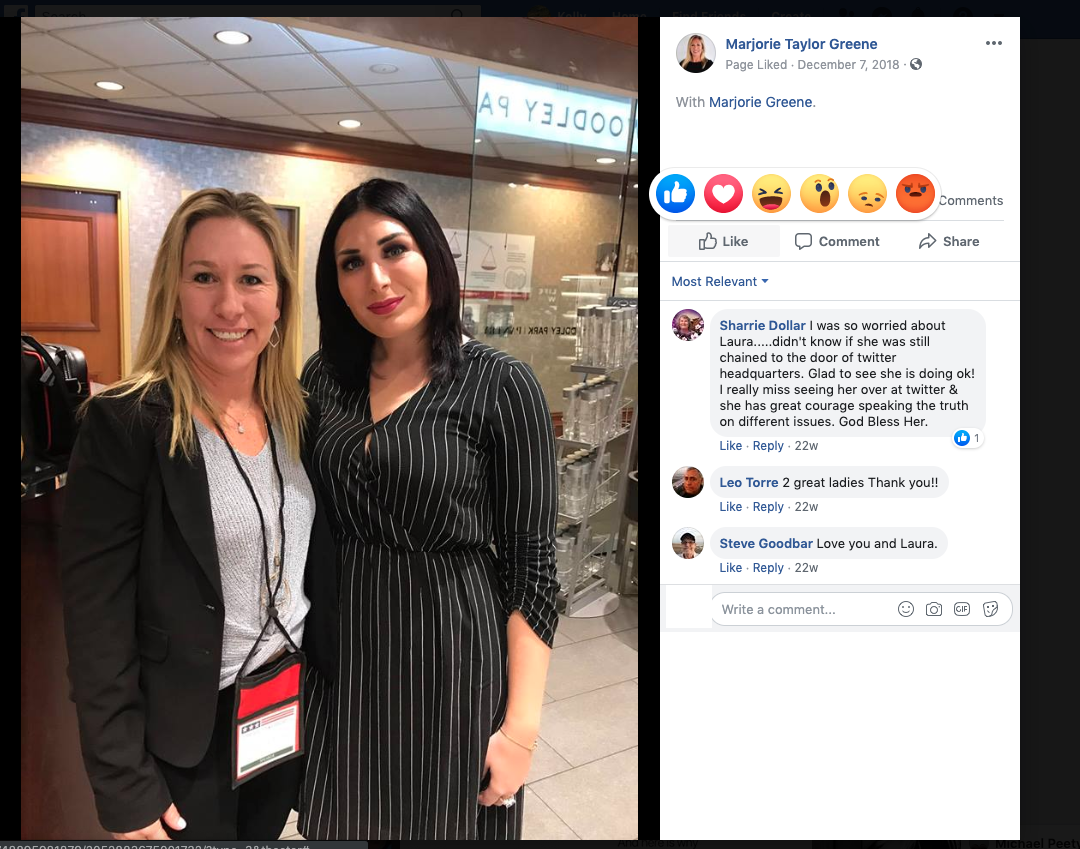 Then in February, Greene hosted her own event in Washington with the promotional help of MAGA livestreamer Anthony Aguero (aka “Conservative Anthony”), InfoWars contributor Will Johnson and far-right, anti-immigration activist Ben Bergquam. The event was officially advertised as a rally in support of the border wall, but the group used the opportunity to livestream its confrontations with lawmakers’ staff members.

At the office of Omar, a congresswoman from Minnesota, Greene and her crew confronted staff and accused Omar, a Muslim and originally a refugee from Somalia, of marrying her brother to help him gain citizenship. Greene also accused Omar and U.S. Rep. Rashida Tlaib of Michigan of supporting Sharia, or Islamic law, and of not being legitimate congresswomen because they were sworn into office using a Quran instead of a Bible.

According to Article VI of the Constitution, senators and representatives sworn in “shall be bound by Oath or Affirmation, to support this Constitution,” but it doesn’t explicitly mention a Bible. As FactCheck.org points out, Article VI explicitly states that “no religious test shall ever be required as a qualification to any office or public trust under the United States.”

At this point, Greene’s content began to circulate and reach a larger online audience. Until then, the small collection of videos on her Facebook campaign page would garner only a few thousand likes, rarely exceeding 10,000 views or more. But the sensationalism of her February appearances in Washington sent her Facebook viewership and searches for her name on Google skyrocketing. Subsequent spikes would occur after each of Greene’s rallies in the next few months.

Greene appears to have a friendly relationship with antigovernment militia leader Chris Hill. Hill is known for planning rallies across the United States in protest of what he believes to be the federal government’s encroachment on Second Amendment rights.

In March, Greene appeared alongside Hill and members of the Three Percent Security Force militia during an event against “red flag” gun laws in Atlanta. The group has grown increasingly hostile toward American Muslims.

In one instance, Hill updated his status on Facebook and condemned the Council on American-Islamic Relations (CAIR), a Muslim civil rights and advocacy group. His post, which read “Last thing, f--- you CAIR. We ain’t finished motherf------” garnered a handful of “like” and “love” reactions. 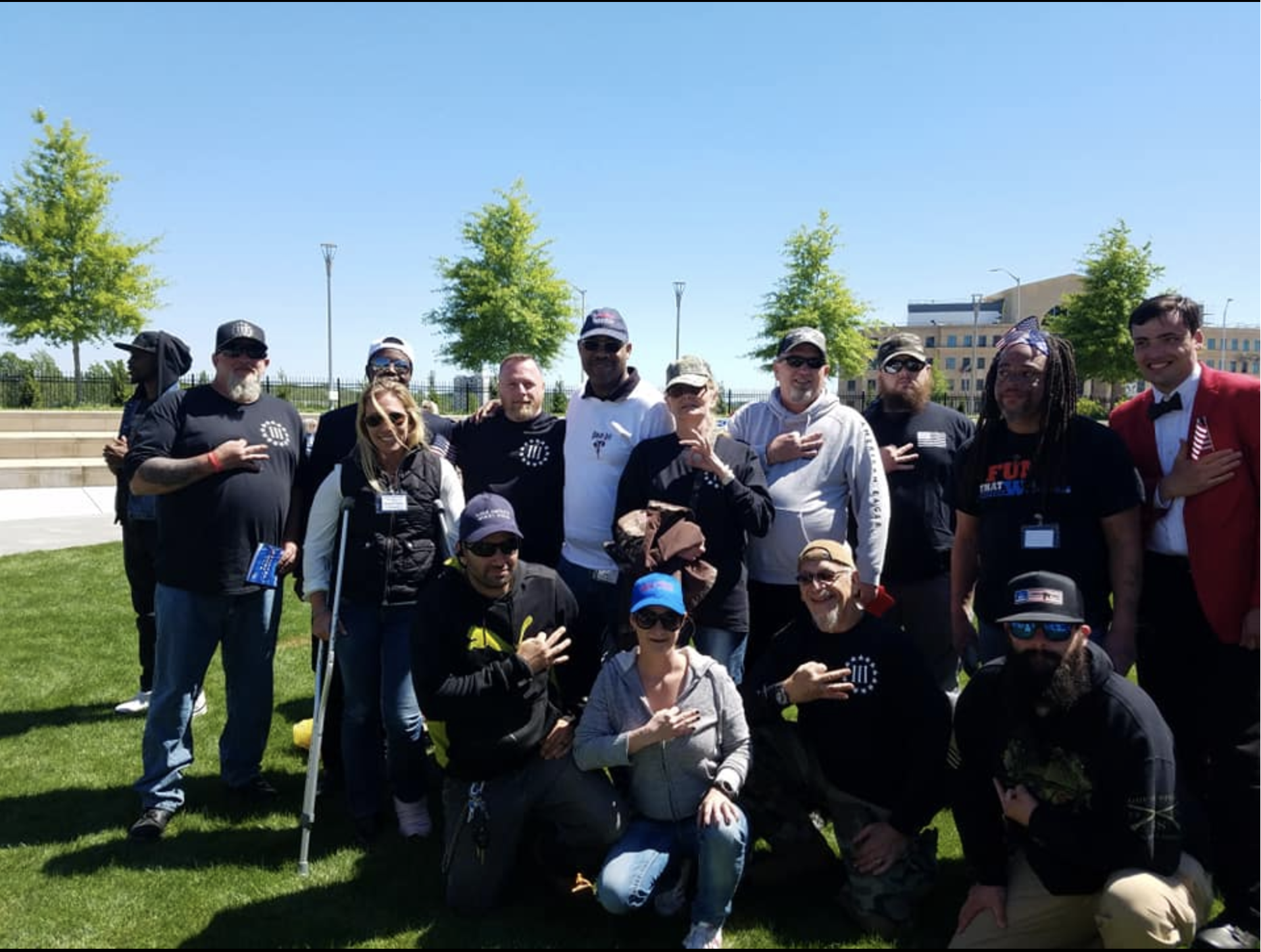 Greene participates in a Second Amendment rally in the spring with antigovernment militia leader Chris Hill and others in Atlanta.

Hill declined to comment about any ties with Greene.

Hill’s rallies have come at a time when Greene has adopted antigovernment views and, in the past, even encouraged her followers on Facebook to "stand up against our Federal Government and begin the process to reign [sic] in this out of control creature!"

Greene’s rhetoric isn’t just confined to the digital world. In March, during a visit to Washington, she confronted David Hogg, the Marjory Stoneman Douglas High School shooting survivor and gun regulations advocate. In footage that still remains on Greene’s Facebook campaign page at the time of publication, Greene heckles the 19-year-old, who was there to meet with lawmakers to discuss gun legislation. She accuses the teen of being “brainwashed” but fails to get a reaction from the young activist.

The incident with Hogg isn’t the only time Greene has gone after people in public for holding views different from her own. Greene, who has opposed the trans community publicly on Facebook and “liked” the anti-LGBT hate group MassResistance, took things a step further in April at a “Drag Queen Story Time” event at an Alpharetta library.

Days beforehand, Greene posted on Facebook, “Trans does not mean gender change, it just means a gender refusal and gender pretending! Truth is truth, it is not a choice!!!”

Greene sat through the library event before apparently secretly recording audio of her confrontation with the assistant manager. She demanded an explanation of why the library hosted an event that went against her personal beliefs as a taxpayer.

On May 30, Greene announced her plans to run for Congress to her Facebook audience, which includes more than 56,000 followers. She hopes to win the Republican primary and challenge Democratic U.S. Rep. Lucy McBath in 2020. Greene’s Federal Election Commission filings from July 15 show that she raised $23,351 in donations. The donations, combined with a $500,000 personal loan, make it clear Greene has no intention of backing out anytime soon.

In a straw poll taken at a Cobb County GOP barbecue event on July Fourth, Greene placed second among candidates, ahead of state Sen. Brandon Beach but behind former U.S. Rep. Karen Handel. She garnered less than half the votes of Handel, who narrowly lost to McBath in 2018.