The longtime leader of the neo-Nazi group the National Socialist Movement (NSM) has renounced his antisemitic past, but court records indicate he remains loyal to the organization.

The NSM and its former leader, Jeff Schoep, are among more than 20 defendants in a federal civil suit stemming from the deadly “Unite the Right” rally in Charlottesville, Virginia, in August 2017. Other defendants include the Nationalist Front, an umbrella organization designed to unite various factions of the “alt-right” and racist movements. Hatewatch previously reported the ties between NSM and the Nationalist Front.

Thirteen people hurt or attacked during the rally originally brought the lawsuit in October of that year and sought unspecified compensatory and punitive damages. Four have since dropped out, leaving nine plaintiffs.

Court filings in the civil suit allege Schoep and his attorney, Edward ReBrook, have used stalling tactics and legal maneuvers to delay the plaintiffs from receiving information their attorneys deem critical to proving their case. For example, the plaintiffs claim ReBrook has “obstinately refused to even inquire who else within the organization, beyond the former leader, possess responsive documents.” 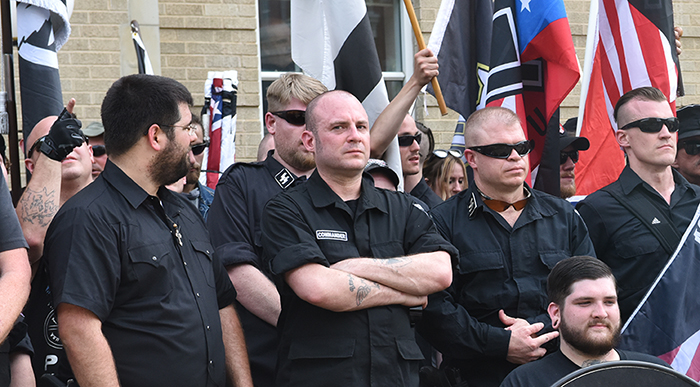 While plaintiffs sought emails, phone records and other information from the defendants they say is relevant to their case, ReBrook said the requests stem from a different motive. In an email attached as an exhibit to a motion in the lawsuit, ReBrook said: “It’s clear to me that what your plaintiffs want is to expose NSM’s members and/or donors so that they can be doxed for all time.” Later in the same email, he added, “You don’t like them, and I get that. They’re a bunch of racists.”

Schoep, in an email to Hatewatch, said he doesn’t have anything other than a computer and a cellphone he’s already turned over to the plaintiffs’ attorneys. A motion from the plaintiffs said the former NSM leader had disclosed the phone fell in a toilet, rendering the information on it unrecoverable.

“If I had something, some shred of evidence of wrong doing in Charlottesville coming from the NSM, don’t you think it would have been in my best interest to just hand it over?” Schoep wrote to Hatewatch.

ReBrook did not return repeated phone and email messages seeking comment about what Schoep has, or had, access to and his relationship with NSM and the Nationalist Front.

Amy Spitalnick, executive director of Integrity First for America, which helped the plaintiffs file the civil suit and is backing their legal efforts, told Hatewatch in an email, “For now, we are going to leave it at what’s detailed in our filing.”

The plaintiffs, in the court filings, try to show that Schoep and ReBrook have not been nearly as forthcoming as they should be.

The plaintiffs say that Schoep would not provide evidence for more than a year and then fired his first attorneys the day after a judge ordered him to produce documents in the case. Schoep then hired ReBrook, who the lawsuit says has engaged in “gamesmanship” and has made “half-hearted attempts” to speak to potential witnesses.

ReBrook “fought hard in recent months to take over the representation of NSM and then fought equally hard to shield the organization from having to produce documents from anyone other than Mr. Schoep,” the plaintiffs allege.

The case took another twist in August when ReBrook asked the court to be relieved as counsel for NSM and the Nationalist Front. ReBrook noted several reasons for the request, including that he did “not believe that the Nationalist Front is a functional entity capable of answering discovery requests” and that he has not “been able to get information from anyone else” at NSM.

The plaintiffs noted that while Schoep has turned over information from personal accounts, he hasn’t produced accounts that may have been created for NSM members with potential NSM documents.

Schoep headed the neo-Nazi group for 25 years. His former organization’s website once demanded “that all non-Whites currently residing in America be required to leave the nation forthwith and return to their land of origin: peacefully or by force.”

But Schoep went public with a disavowal of the far right and NSM, a group known for propaganda, provoking violence and uniforms that evoked Nazi Germany. He left the group in March and now refers to himself as a “peace advocate” on his personal website.

“After wrestling with my conscience, over how to best set things right, I realized that I cannot just sit back while the world continues to burn in the flames of hatred,” Schoep said on his website.