Right-wing attorney, writer and legal analyst Ken Klukowski has landed a position in the Trump administration in the White House Office of Management and Budget (OMB).

Klukowski has a long history with right-wing organizations, including anti-LGBT hate groups. The OMB is one of the most influential offices in government. It reports directly to the president and determines how money is spent on everything from national security to the environment. The OMB ensures White House policies are carried out across federal agencies. 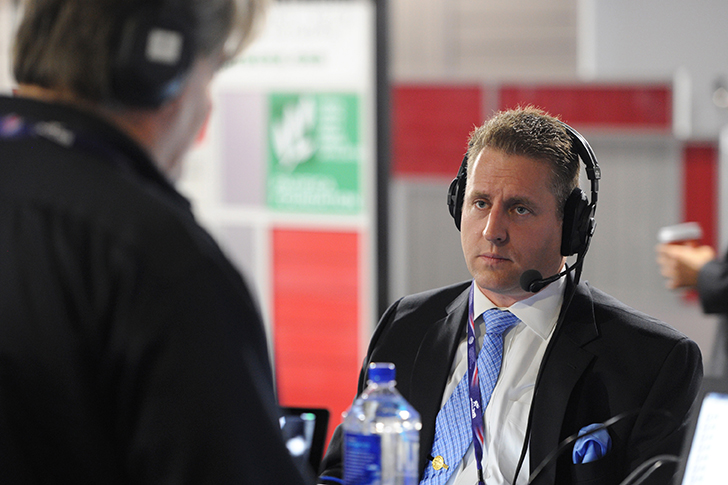 Ken Klukowski (right) talks with Steve Bannon on "Breitbart News Daily" during the Republican National Convention in 2016 in Cleveland. (Photo by Ben Jackson/Getty Images for SiriusXM)

﻿Klukowski joins OMB staff with their own right-wing connections. OMB’s director is Mick Mulvaney, who is also acting White House chief of staff. Mulvaney has tea party ties and was a co-founder of the hard-right House Freedom Caucus. Acting OMB Director Russell Vought is an ally of Vice President Mike Pence and is a former vice president of Heritage Action, the lobbying arm of the anti-LGBT Heritage Foundation. As chief counsel and assistant to Pence, Paoletta was “very involved” in the nomination of Supreme Court Justice Neil Gorsuch, according to CNN.

When reached by Hatewatch via email, OMB press secretary Chase Jennings passed along this comment from someone he described as being close to Klukowski: “It is well-known that Ken has a strong work history defending religious freedom and the unborn with several organizations – including Family Research Council.”

Klukowski has played an important role in writing amicus briefs for right-wing issues before the Supreme Court, including opposition to the Affordable Care Act and gun control measures. He was one of the attorneys who filed an amicus brief in support of Colorado baker Jack C. Phillips in the Masterpiece Cakeshop case. Phillips refused to make a wedding cake for a same-sex couple, citing his religious beliefs. His attorneys argued that the First Amendment gave him the right to refuse service on free speech grounds. (The high court narrowly ruled for the baker, citing “hostility” to religion by the Colorado Civil Rights Commission.)

Klukowski has also made anti-LGBT statements through his writings for right-wing outlets such as Breitbart News, where he has been its senior legal editor. He has said that a “homosexual agenda is moving forward in federal court” and that same-sex parents are not as good for children as those of the opposite sex. He has criticized “liberals’ homosexual and transgender agenda” and the Obama administration for its federal hiring policies on LGBT people.

In a 2019 piece for Breitbart, Klukowski asserted that under a Pennsylvania school’s trans-inclusive policy, a “17-year-old boy can identify as a girl, and then has the right to use a shower next to a 15-year old girl in the locker room while that girl is fully undressed.” Anti-LGBT groups use this trope to imply that transgender people are somehow predatory or inconsistent with their gender identities.

Discussing the reinstatement of the ban on transgender troops in the military, Klukowski argued on Breitbart that the Department of Defense has prohibited people with “mental disorders” from serving for decades. He cited a Supreme Court filing that explained the majority of Americans are ineligible to join the military without a waiver for medical, mental or behavioral reasons. Transgender individuals are among those ineligible, he wrote.

Klukowski’s most recent Breitbart article accused some Democratic senators of making “court-packing” threats, saying they demanded in an amicus brief that the Supreme Court decline to hear a case over a gun control law. He warned that if Democrats win the White House and Senate in 2020, “they will fundamentally remake the High Court.”

Klukowski has held pivotal positions at anti-LGBT organizations since graduating from George Mason University’s law school in 2008 and doing a law clerkship for Judge Alice Batchelder of the 6th U.S. Circuit Court of Appeals.

He was a research fellow at the ultra-conservative Liberty University School of Law and also the director of the Center for Religious Liberty for the Family Research Council (FRC), an anti-LGBT hate group.

He has co-authored two books with FRC senior fellow Ken Blackwell, the former Ohio secretary of state known for his anti-LGBT rhetoric. One of the books accused Barack Obama of trying to subvert the Constitution and “build an imperial presidency,” while the other claimed that constitutional conservatism can “save America.”

Anti-LGBT First Liberty Institute hired Klukowski in 2015 as senior counsel and director of strategic affairs “to litigate cases involving the First Amendment and freedom of belief and expression.” Anti-LGBT hate group Alliance Defending Freedom (ADF) referred to Klukowski in 2017 as an ally at First Liberty, and Klukowski has said he has participated in ADF legal trainings, according to The Nation.

Klukowski served on the Trump transition team with Blackwell, who was domestic policy chair. According to a HuffPost report, Blackwell said that Klukowski “structured” the draft of the controversial “religious freedom” order. A draft was leaked in early 2017 and included exemptions for people and organizations claiming religious objections to abortion, premarital sex, transgender rights and same-sex marriage. Trump later signed an executive order in May 2017 to “enhance religious freedom and freedom of speech.” This version did not include language from the earlier draft that would have allowed federal contractors to discriminate against LGBT employees on the basis of religion.

Klukowski’s appointment is “another example of the increasingly cozy relationship between this administration and elements of the far-right,” said Gillian Branstetter, media relations manager at the National Center for Transgender Equality, in an email to Hatewatch. “Entrusting implementation of administration policies to someone with Mr. Klukowski’s track record will further pave the way for this administration to endanger the rights of transgender people to live, labor, and learn as who we are.”