A weekend tweet by President Donald Trump mirrors the language of a militia movement that has been calling for civil war for at least three years and gives extremist groups a powerful seal of approval.

On Sunday, Trump tweeted a comment that the Rev. Robert Jeffress made on “Fox & Friends Weekend” that same day.  “....If the Democrats are successful in removing the President from office (which they will never be), it will cause a Civil War like fracture in this Nation from which our Country will never heal.”

Jeffress, a Trump loyalist, is the senior pastor of the First Baptist Church in Dallas. He has a history of anti-LGBTQ rantings, calling gays and lesbians perverse, miserable and abnormal. In addition to bringing light to Jeffress’ views, the tweet also gave a cause to the militia movement.

Less than four hours after Trump’s comment, one of the country’s best-known antigovernment groups, the Oath Keepers, tweeted, in part: “We ARE on the verge of a HOT civil war. Like in 1859. That’s where we are. And the Right has ZERO trust or respect for anything the left is doing. We see THEM as illegitimate too.” 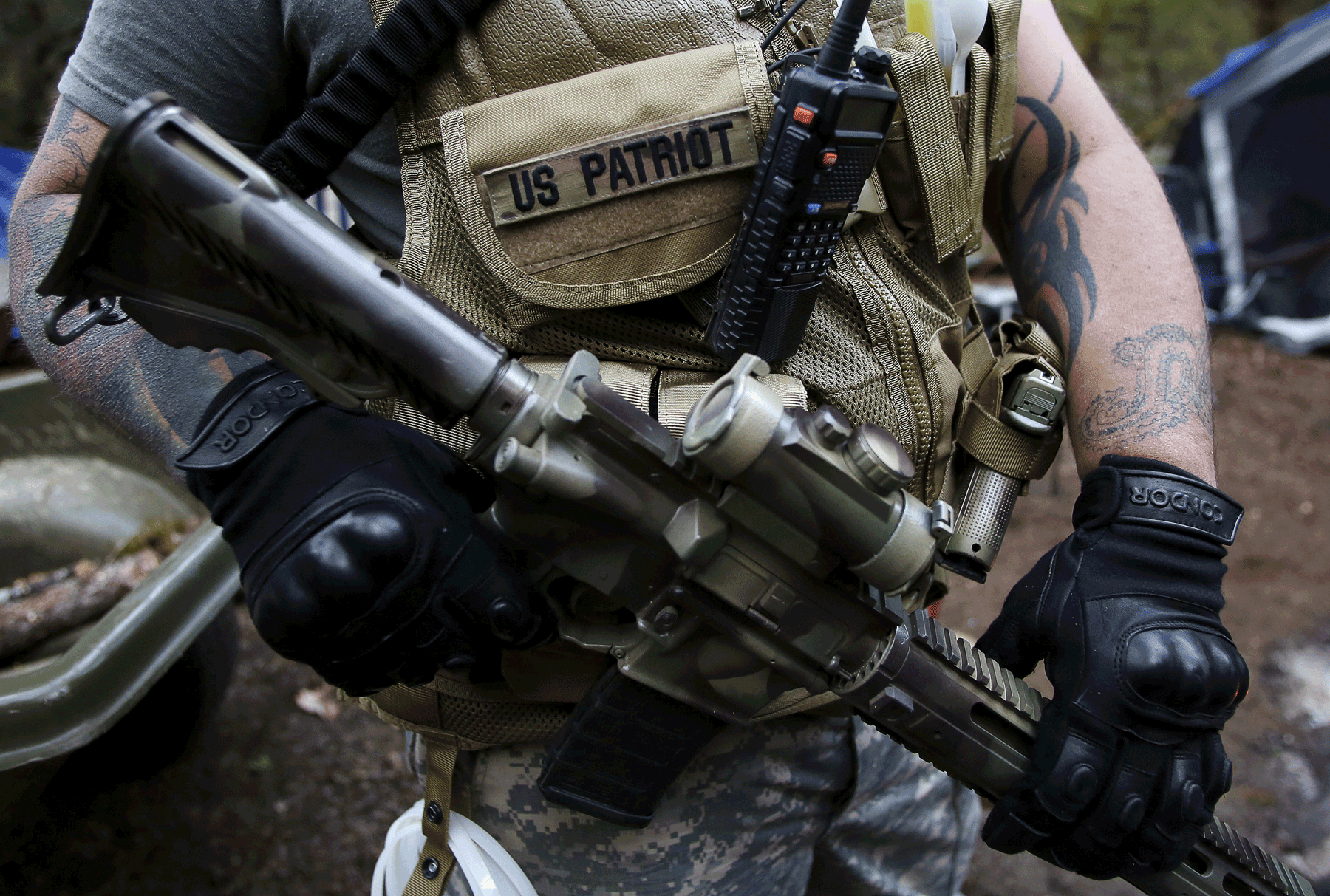 Members of antigovernment group the Oath Keepers patrol at a mine outside Grants Pass, Oregon, in 2015. (Photo by Jim Urquhart/Reuters)

The American Patriots Three Percent appear to be recruiting around the civil war threat. The group shared a YouTube video from a conspiratorial media outlet claiming that militias are "activating all across the country" to prepare to combat "an illegal coup taking over the United States of America." The video appeared Wednesday, one day after Trump called the impeachment inquiry in the House of Representatives a "coup."

Talk of civil war among militia groups has been ongoing for years. Whether it’s anger over immigration and the lack of a wall across the southern border, or concern over a socialist takeover and gun regulation, militias have long taken to social media to pledge they’re ready for a fight.

Back in 2014, the conservative talk-show provocateur Michael Savage, who’s spread antisemitic views and given airtime to white nationalist conspiracy theories, wrote “Stop the Coming Civil War.” His book argued that President Barack Obama’s election in 2008 “might represent the final nail in the coffin of freedom.”

“Col. Kratos,” a pseudonym for one of the anonymous founders of the Arizona State Militia, took to Facebook on June 20, 2018, writing: “It is time to rid this nation of the liberal left mental disorder, and take our nation back. I for one have had enough of the bullshit that is being spewed at our President, so if it is civil war you wish for, let us not waste any more time.”

The Three Percent Defense Militia blamed the left for a coming battle. “The left is pushing for a civil war more and more every day,” it wrote in a Facebook post on June 25, 2018.

But scholars are beginning to warn that the possibility of violence may be real, especially as fringe groups receive what they perceive as support.

The peer-reviewed journal Terrorism and Political Violence published a paper in 2017 that warned, “As the fringe becomes legitimized by this mainstreaming, the possibilities for violence increase.” Nina Silber, president of the Society of Civil War Historians, doesn’t see American society moving to a civil war – yet. But she said she’s worried about the possibility of political violence.

“More ominous, I think, are  indications of political violence and the willingness to enact political violence,” Silber, a history and American studies professor at Boston University, told BU Today, the university’s daily online publication, in March.

But ominous extends to what the general public thinks. According to a 2018 poll by Rasmussen Reports, nearly one in three Americans believe the country will experience a second civil war in the next five years.