His appearance will mark the third year in a row the president or vice president has spoken at the major networking venue for right-wing lawmakers and activists. Trump spoke in 2017, telling attendees, “We don’t worship government, we worship God.” In 2018, Mike Pence became the first vice president to address the event.

Organizers bill the summit, which kicks off Friday in Washington, as a gathering of people who wish to “preserve the bedrock values of traditional marriage, religious liberty, sanctity of life and limited government that make our nation strong.” But in doing so, the summit embraces groups and individuals with a history of intolerance. 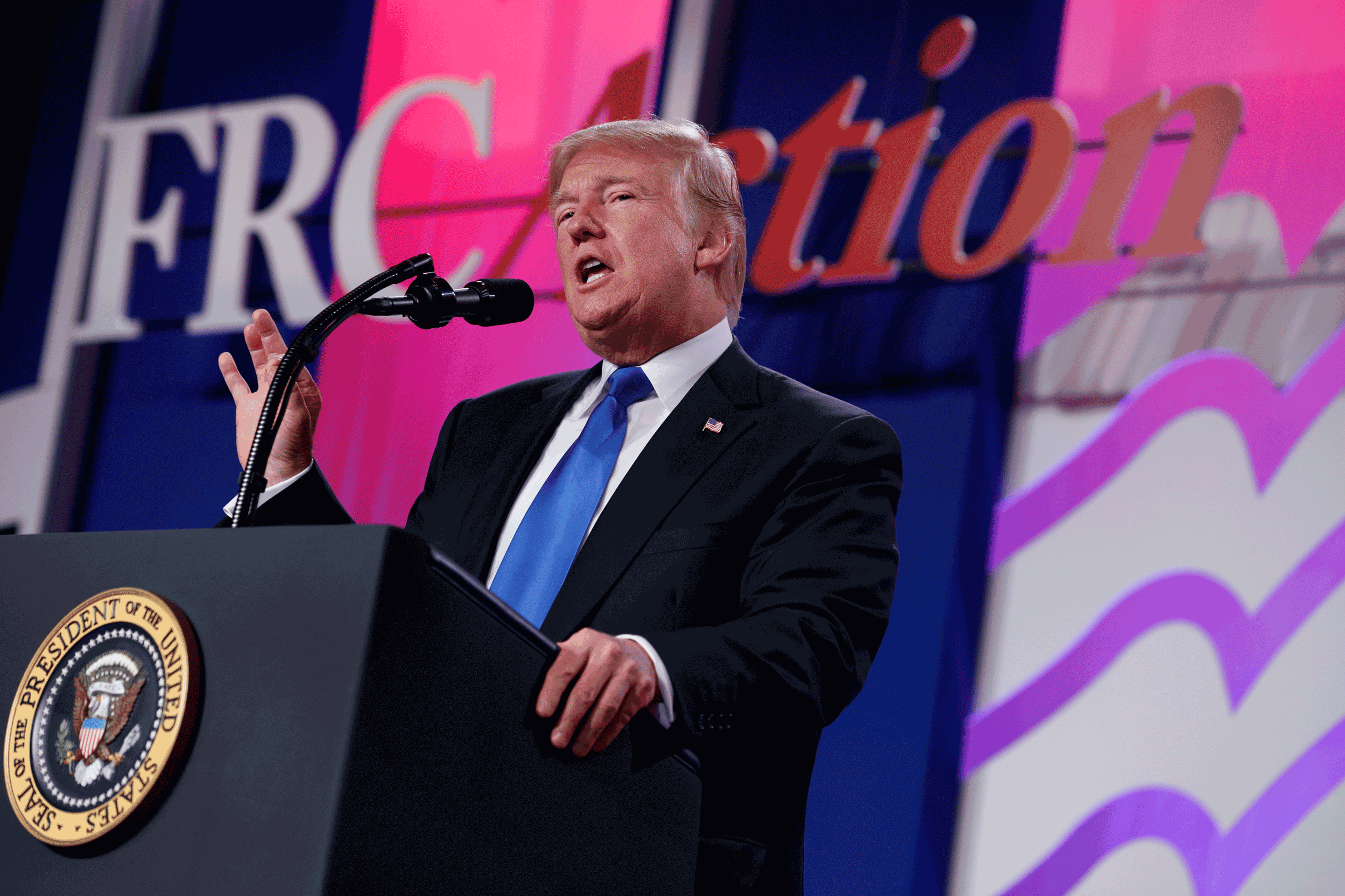 The Values Voter Summit began in 2006 by the action arm of anti-LGBT hate group Family Research Council, and FRC Action has remained a primary organizer each year. Anti-LGBT hate group American Family Association is a co-sponsor.

Since its founding in 1983, the Family Research Council has become one of the most powerful Christian-right lobbying groups in the country, influencing policy on state and federal levels. Tony Perkins, the council’s president, is the chair of the U.S. Commission on International Religious Freedom, an independent, bipartisan federal government commission charged with defending freedom of religion worldwide. The panel makes recommendations to the president, secretary of state and Congress.

The Family Research Council has spent decades demonizing LGBTQ people as dangerous to children and unhealthy. The group spreads harmful pseudoscience via its publications and rhetoric. A page on its website devoted to homosexuality reads that “homosexual conduct is harmful to the persons who engage in it and to society at large, and can never be affirmed.”

In addition to the president, U.S. Secretary of Health and Human Services Alex Azar is a confirmed speaker. According to a tweet from the Family Research Council, Azar will be the first sitting HHS chief to attend the summit. Azar and other HHS officials are longtime Pence associates. Under Azar’s direction, HHS has implemented rules that expand the ability of health care workers to refuse services on religious grounds, which could affect the access of LGBTQ people.

Other speakers at this year’s summit include Benjamin Bull, former chief counsel at anti-LGBT hate group Alliance Defending Freedom (ADF) and former executive director of ADF’s international arm. According to the program, he will discuss “Advancing religious liberty in a LGBT World.”

ADF is one of the most powerful anti-LGBT legal organizations in the country and has worked to criminalize same-sex relationships in the United States and abroad. Many of its current lawsuits are attempts to marginalize transgender students in schools and to deny legal protections to transgender people.

Brigitte Gabriel, founder and chairman of ACT for America, a hate group that spreads conspiracy theories about Islam and Muslims, is also scheduled to speak. Gabriel has claimed that a practicing Muslim “cannot be a loyal citizen to the United States of America.” She reportedly has also said that a quarter of all Muslims support the destruction of Western civilization.

Summit fixture Gary Bauer, a longtime Christian right activist and former Reagan administration official, will preside over a luncheon. As an early president of the Family Research Council, Bauer enlisted researchers and propagandists such as Robert Knight to write anti-LGBT material. Bauer, who heads the group American Values, also serves on the Commission on International Religious Freedom with Perkins. Bauer’s term is set to expire in 2021.

The summit often includes panel sessions and speeches that deal with “religious liberty” and how Christians are under threat of losing rights because of LGBTQ equality movements and other progressive and secular forces.

One session this year is called “The Progressive Assault on (Christian) freedom of conscience,” and claims that Christians could be persecuted by the government for observing their religion. “Florists, photographers and bakers are being fined for refusing to facilitate in homosexual weddings. Preachers are arrested for proclaiming the gospel in Muslim neighborhoods,” one part of the program synopsis says.

The event features speakers with strong current or former ties to the White House, including Bauer. Sebastian Gorka, a former deputy assistant to Trump who has ties to Hungary’s far right and to anti-Muslim conspiracist Frank Gaffney, is on the schedule. And two of the White House’s most ardent supporters, U.S. Reps. Mark Meadows and Steve Scalise, are slated to attend. Meadows, a member of the House Freedom Caucus, makes frequent appearances on Perkins’ radio program, “Washington Watch,” and played a key role in pushing the Trump administration’s anti-trans policy with regard to the military.

Summit exhibitors include the Family Research Council; the anti-LGBT hate group Americans for Truth About Homosexuality, which has repeatedly linked homosexuality to pedophilia; and the John Birch Society. The latter, an antigovernment group, has pushed conspiracy theories about communism, the United Nations and the Federal Reserve for decades.