William Henry Fears IV, an avowed racist with a lengthy criminal record, has agreed to a plea deal of five years for choking his former girlfriend.

In a video uploaded to the social media platform Telegram, Fears describes the terms of his deal:

“My name is William Fears. … I just signed for five years in prison because of a statement a woman made against me. And this is why I hate women. I am actually not guilty. I’m signing guilty because they’ve got me by the balls, and they’re going to try me Friday if I don’t sign now.” 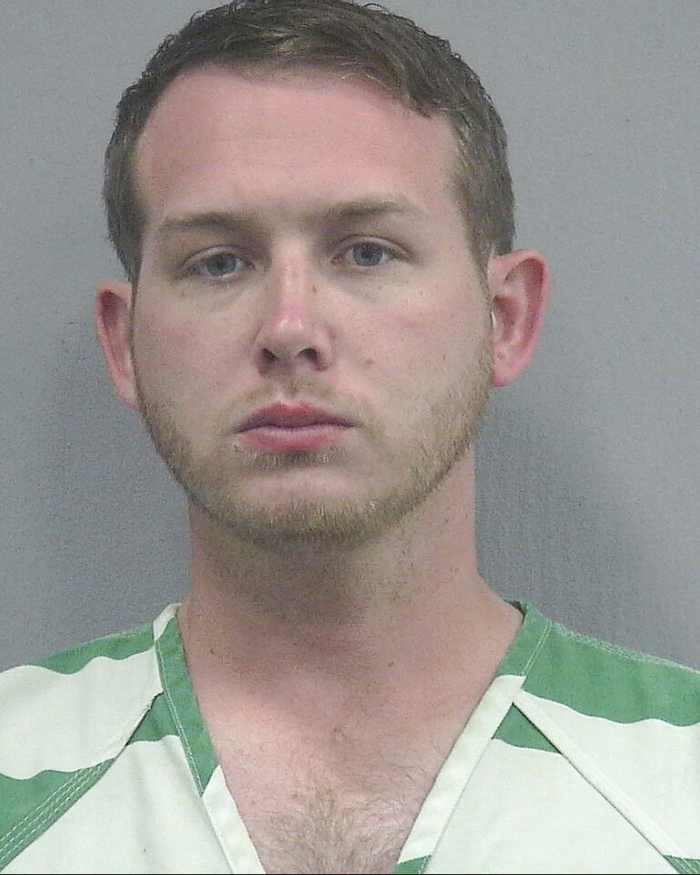 William Henry Fears IV, who was part of the deadly "Unite the Right" rally in 2017, pleaded guilty to an assault charge in the choking of his ex-girlfriend. (Alachua County, Florida, Sheriff's Office via AP Images)

Fears then told fellow white nationalists where to contact him within the Texas Department of Criminal Justice before exhorting them to “never, ever trust women ever.”

Fears pleaded guilty to assault on a family member, impeding breathing, in Harris County, Texas. He is now in the custody of the Harris County Sheriff’s Office in Houston. Records show the court dismissed a charge of being a felon in possession of a weapon. The weapons charge occurred after Fears was arrested with a firearm while out on bond for the assault on his former girlfriend.

According to the Giffords Law Center, domestic violence victims are five times more likely to be killed when an abusive partner has access to a gun.

Fears’ case was set for jury trial when he agreed to take the plea of five years in prison, said Michael Kolenc, spokesman for the Harris County District Attorney’s Office.

“The State of Texas looked at numerous factors when agreeing to the plea deal, but the most important factor was the opinion of the victim in the case,” Kolenc said in an email to Hatewatch. “The victim stated she was pleased with the agreement and that she did not have to go through the ordeal of a jury trial. The State was aware of the Defendant’s past criminal conduct and therefore was not willing to agree to any deal involving any type of probation, only prison time.”

Fears, 32, has a long criminal history that includes a 2010 felony conviction for aggravated kidnapping. In that case, he reportedly abducted a female acquaintance at knifepoint at the University of Texas at Tyler. In 2013, he was convicted of the sale or transfer of firearms, also a felony, in Delaware County, Pennsylvania.

Fears attended the deadly “Unite the Right” rally in Charlottesville, Virginia, in August 2017. A video from Unite the Right shows Fears yelling: “Shoot! Fire the first shot in the race war.” Vice News wrote that Fears carried a flag representing the Texas chapter of Vanguard America, a white supremacist group.

James Alex Fields, who marched with Vanguard America in Charlottesville, was convicted of using his car to run down a crowd of anti-racist demonstrators, killing counterprotester Heather Heyer and injuring dozens. Fields was sentenced to more than 400 years in prison.

According to the complaint filed by Fears’ ex-girlfriend, he choked her less than two weeks before he, his brother Colton and Tyler Tenbrink traveled from Texas to Florida to attend a speech by white nationalist leader Richard Spencer at the University of Florida. A confrontation erupted between Spencer’s supporters and protesters, during which Tenbrink fired a shot into a crowd before getting into a vehicle with the Fears brothers.

Tenbrink pleaded no contest and was convicted of aggravated assault with a deadly weapon and possession of a firearm by a convicted felon. He’s serving a 15-year sentence in a Florida jail. Colton Fears, who drove the car during the confrontation, pleaded guilty to accessory after the fact to attempted first-degree murder.

Authorities in Florida arrested William Fears, but prosecutors elected not to charge him because of a lack of evidence.

He was then extradited to Texas on an out-of-state warrant for his arrest.

The Vice News report painted a picture of Fears as an angry and violent man. He asked a female reporter if she wanted a boyfriend and if she wanted “to continue the white race with me.” The same story reported that Fears’ now-suspended Twitter account once read, “Charismatic leader of a White breeding cult."