The neo-Confederate League of the South (LOS) has summoned members to Pittsboro, North Carolina, on Saturday to protest the removal of a Confederate statue.

Shaun Winkler, the league’s Mississippi state chairman, used a Facebook post this week to direct members to show up in the league’s uniform – khaki cargo pants, black combat boots and black polo shirts – and be ready to fight for “our beloved Dixie” and “defend our heritage.”

Since Sept. 14, small groups have gathered each Saturday in Pittsboro to protest an order from the Chatham County Board of Commissioners in August to remove a statue in front of the county courthouse that honors local Confederate soldiers. 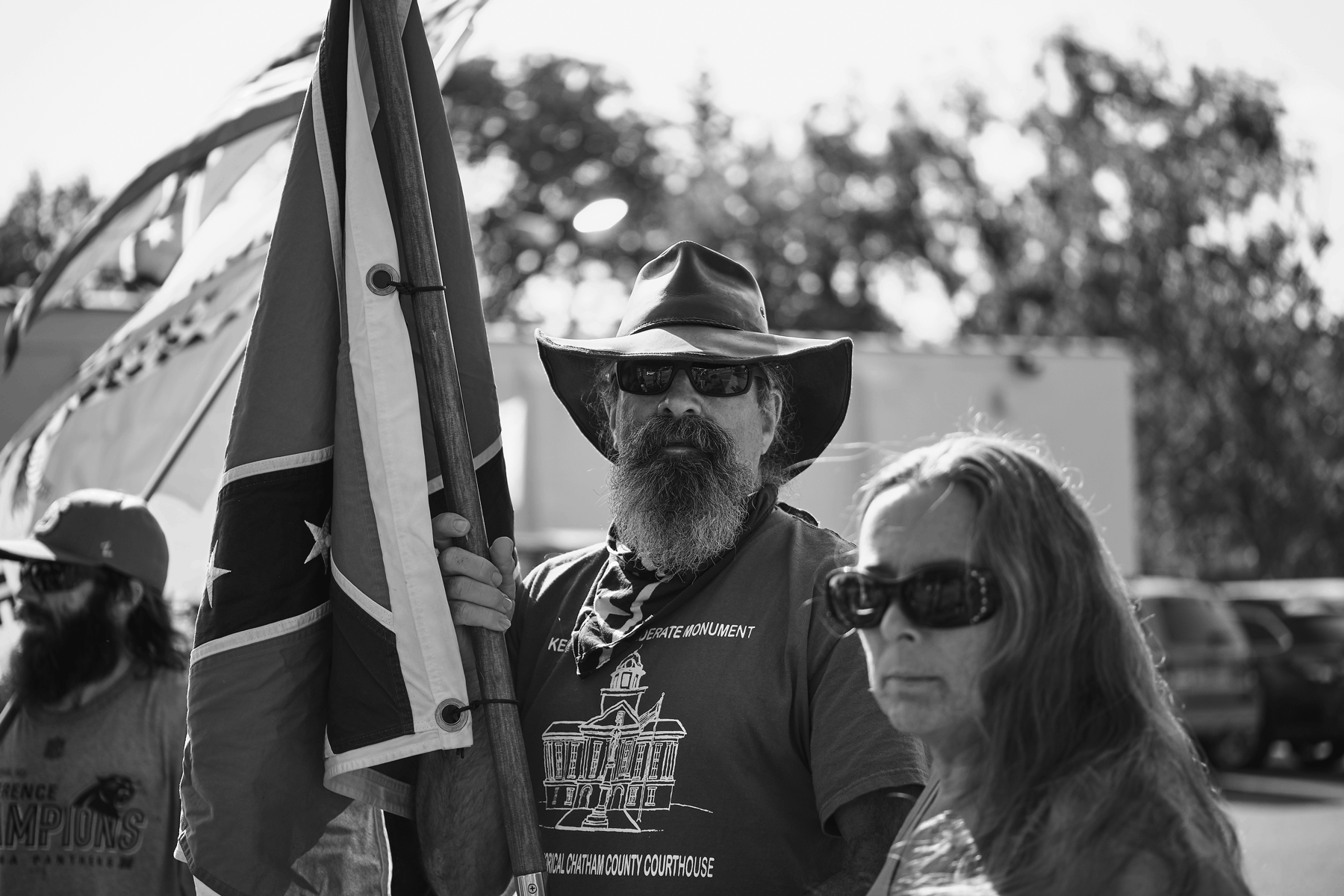 The League of the South's George Randall joins other neo-Confederates at a Sept. 28 rally opposing the removal of a Confederate statue in Pittsboro, North Carolina. (Photo by Daniel Hosterman)

Commissioners told a United Daughters of the Confederacy chapter, which donated the monument in 1907, to remove the statue by Oct. 1 or the county would take it down. But the statue remains.

Chatham County Sheriff's Office spokesman Rik Stevens said local law enforcement was aware of Saturday's rally. “We hope that there’s no violence, but at this point we don’t know exactly what is going to happen,” Stevens said. “We’re going to do our best to protect public safety.”

The Pittsboro police didn't return calls or emails seeking comment about their preparations for crowd management and peacekeeping. The Chatham County town of about 4,300 residents is more than 30 miles west of Raleigh.

Winkler’s Facebook post says members will travel from Panama City, Florida – some 660 miles away – and be in Pittsboro on Saturday morning. “We need strong men and women to be present to defend our heritage yet once again against the communist scum,” he said. Winkler’s message claims “antifa” activists will head to Pittsboro to pull down the statue.

This weekend’s protest comes against the backdrop of strife over the statue's removal that has attracted pro-Confederate groups from across the South. These include:

The Hiwaymen have, on social media, thrown their support behind a protest this weekend. Billy Sessions, the leader of the Arkansas-based Hiwaymen, shared a Facebook video decrying Chatham County's decision to remove the statue. “No, we’re not having that shit. You know we’ve had Hiwaymen up there and Lady Hiwaymen up there in Pittsboro damn near every weekend. Do you know how many of the community of North Carolina comes out and stands with our guys? Not a whole lot.”

These groups have squared off against counterprotesters, resulting in arrests on both sides. Jessica Reavis, a prominent League of the South member, was arrested Oct. 5 in Pittsboro and charged with carrying a concealed gun and carrying a concealed weapon, The (Raleigh) News & Observer reported.

These rallies can draw members of overtly white nationalist groups, which see altercations around racist symbols such as Confederate statues as the perfect milieu to spread their ideology of white racial grievance and ethnonationalism. Demonstrating the viability of Confederate protests as a recruitment tool, a Twitter account linked to Reavis tweeted, “Alliances were made,” about the Oct. 5 Pittsboro demonstration that led to her arrest.