Influential evangelical leader Franklin Graham has continued his anti-LGBTQ associations by speaking to a hate group that brands “trans” activists as guilty of harming children.

Graham was guest speaker at the anti-LGBTQ hate group Illinois Family Institute’s annual fall banquet titled “Faith, Family and Freedom.” Graham’s remarks included his support of President Donald Trump and what he called the nation’s faltering state of morality. But his appearance at the Nov. 1 event outside Chicago links him to a group with a history of anti-LGBTQ stances perhaps even more extreme than his own.

The Illinois Family Institute is a state affiliate of anti-LGBTQ hate group American Family Association, though it operates independently. 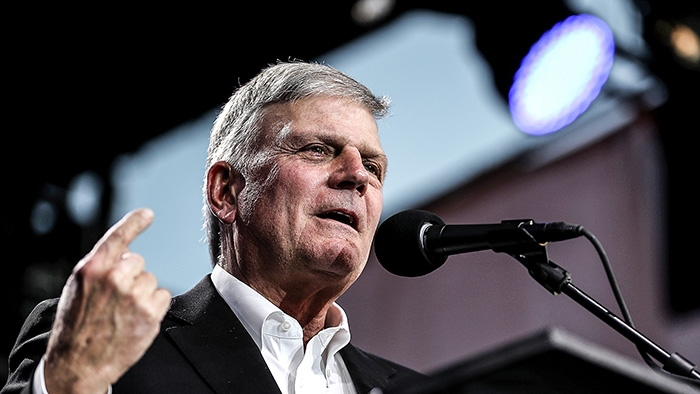 Franklin Graham speaks during his "Decision America" tour at the Stanislaus County Fairgrounds on May 29, 2018 in Turlock, California. (Photo by Justin Sullivan/Getty Images)

Examples of the Illinois group’s statements about LGBTQ people include that homosexual behavior is “medically, emotionally and spiritually unhealthy.” In July, Laurie Higgins, a cultural affairs writer for the group, said that trans people are harming children, stating that the “ravenous, pro-‘trans’ behemoth smells the blood of children in our murky cultural waters and is hurtling toward them with blinding speed.” Higgins went on to say that “trans activists [are] in league with ‘many homosexuals’” and are “propagandizing, grooming, and mutilating children.”

For his part, Graham has recently been admonished for what some of his critics liken to hate speech. He’s linked LGBTQ people and support for them with “deepening depravity that now vexes our country” and called Islam “wicked” and “evil.”

The closest he came to addressing LGBTQ issues at the banquet was when he told the crowd sex is for a man and a woman in a “marriage relationship,” according to a review of the event posted by the right-wing blog Illinois Review.

The Illinois Family Institute responded to a Hatewatch request for comment with an email that it also posted on Facebook that started, “Surely you jest.” The email went on to address issues other than Graham’s appearance and included a long passage from "The Pilgrim's Progress," a Christian novel. A spokesman for Graham told Hatewatch that the evangelist is traveling and might not be able to answer questions.

Graham, a son of the late evangelical preacher Billy Graham, is president and CEO of Samaritan’s Purse, and the Billy Graham Evangelistic Association. According to the organization’s website, Samaritan’s Purse provides “spiritual and physical aid to hurting people around the world,” including those affected by war, natural disasters, disease and famine. The charity has faced criticism for using its Operation Christmas Child donation program to try to convert children in majority-Muslim countries to Christianity.

According to the Illinois Review, Graham said during his keynote address that Trump became president because God was behind the election, a theme he’s used in the past. But he also said Trump is the victim of an attempted coup by the left and “deep state.” The "deep state" theory holds there are forces in the federal government trying to overthrow the Trump administration. Graham also praised Trump because he surrounds himself with Christians such as Vice President Mike Pence, Housing and Urban Development Secretary Ben Carson and Secretary of State Mike Pompeo.

But those words of hope stand in stark contrast to these remarks given in a Christian Broadcasting Network interview:

So I want the gay and lesbian people to know that if they repent and turn from those sins, God will forgive them and heal their hearts. But I'm not going to accept it and say what they're doing is fine. It's not fine. It's not fine with God and they'll stand before him one day.

Brett Barrouquere contributed to this report.