The Congressional Hispanic, Black, Asian Pacific American and Progressive caucuses issued a joint statement Thursday calling for the resignation of Miller, the architect of the White House’s immigration policy. “It’s clearer than ever that Stephen Miller is a far-right white nationalist with a racist and xenophobic worldview,” the group said in a press release. 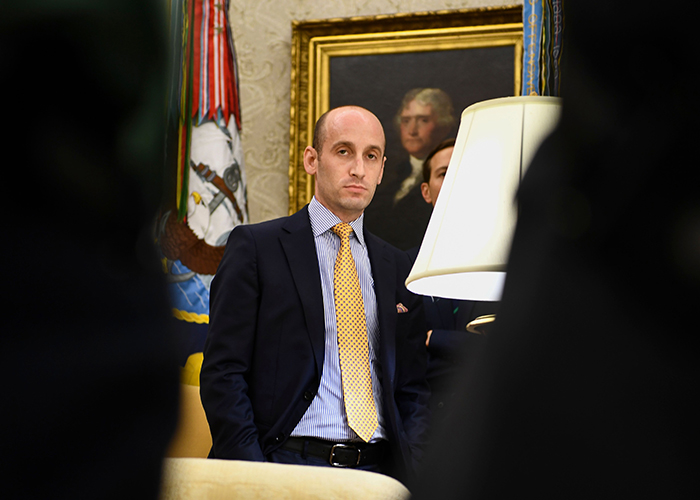 White House senior adviser Stephen Miller looks on as President Donald Trump speaks to the media in the Oval Office of the White House in Washington on July 26, 2019. (Photo by Brendan Smialowski/AFP via Getty Images)

Vanita Gupta, president and CEO of the Leadership Conference for Civil and Human Rights – a coalition of civil and human rights advocacy organizations, of which the SPLC is a member – drove this point home Thursday in a statement to Hatewatch.

“Unless and until [President Donald] Trump fires Stephen Miller and all who promulgate bigotry and hate – and abandons his administration’s anti-civil rights agenda, including the Muslim ban and family separation,” Gupta said in a written statement, “he will continue to be responsible for the violence fueled by that hate. Trump must remove Stephen Miller from the White House.”

And, on Friday, the Huffington Post reported more than 75 members of the House of Representatives, all Democrats, have demanded Miller resign. 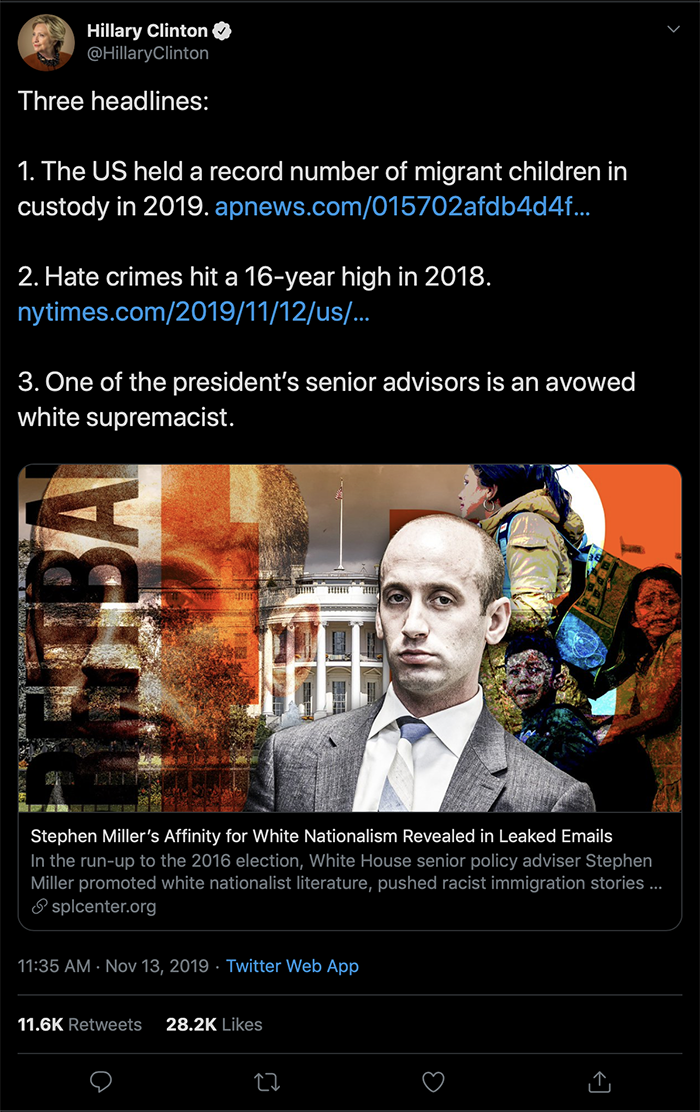 An analysis of over 900 emails from 2015 and 2016, which were given to the SPLC by former Breitbart News editor Katie McHugh, shed light on Miller’s emails that pushed nationalist literature and racist immigration stories. McHugh, who has since abandoned her previous ties to the white nationalist movement, told Hatewatch on Thursday that she provided the emails because she “experience[d] the evil [of] the far right and white supremacy in person, and we all see the violence they inflict on the country, particularly on the most vulnerable.”

“They must never be allowed near positions of power,” she continued. “I will do everything I can to ensure this never happens again.”

Lawmakers, journalists and activists reacted quickly to the stories. Miller’s anti-immigrant views and relationships with white nationalists Peter Brimelow and Richard Spencer had been well known for some time. But the emails, in McHugh’s view, provided evidence that, as she told The New York Times, “a clear line” existed between the “white supremacist websites where [Miller] is getting his ideas to current immigration policy.” 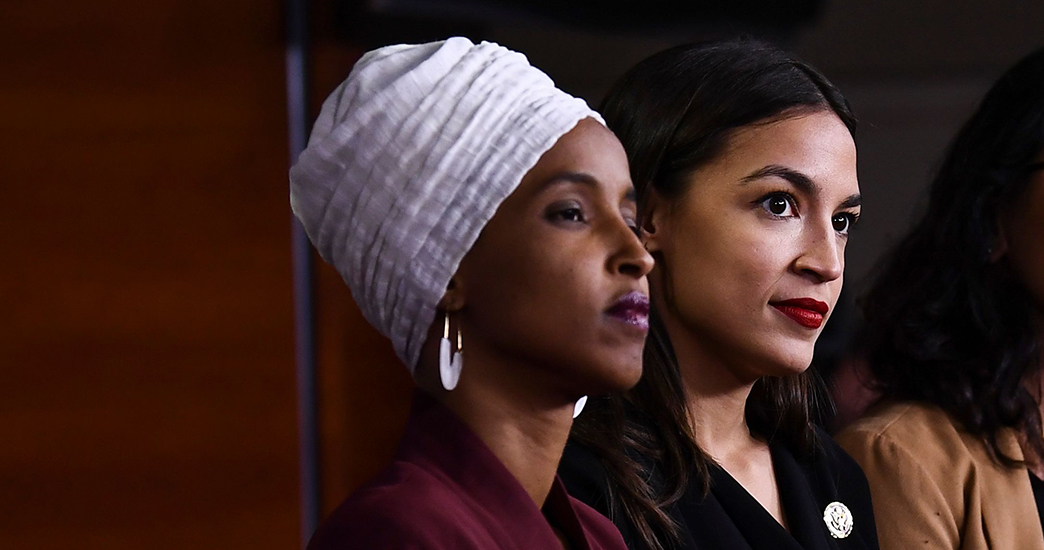 Several Democratic lawmakers called for Miller’s resignation. Rep. Alexandria Ocasio-Cortez (D-N.Y.) called Miller a “bonafide white nationalist” in a tweet. She followed up her statement Wednesday with a petition calling for Miller to step down.

Representative Ilhan Omar (D-Minn.) called for Miller’s resignation as well. “As I said earlier this year: Stephen Miller is a white nationalist. And now we have the emails to prove it,” she tweeted Tuesday. “Miller needs to step down. Now.” In April 2019, Rep. Omar was attacked by Breitbart News, and even by Trump himself, for calling Miller a white nationalist. 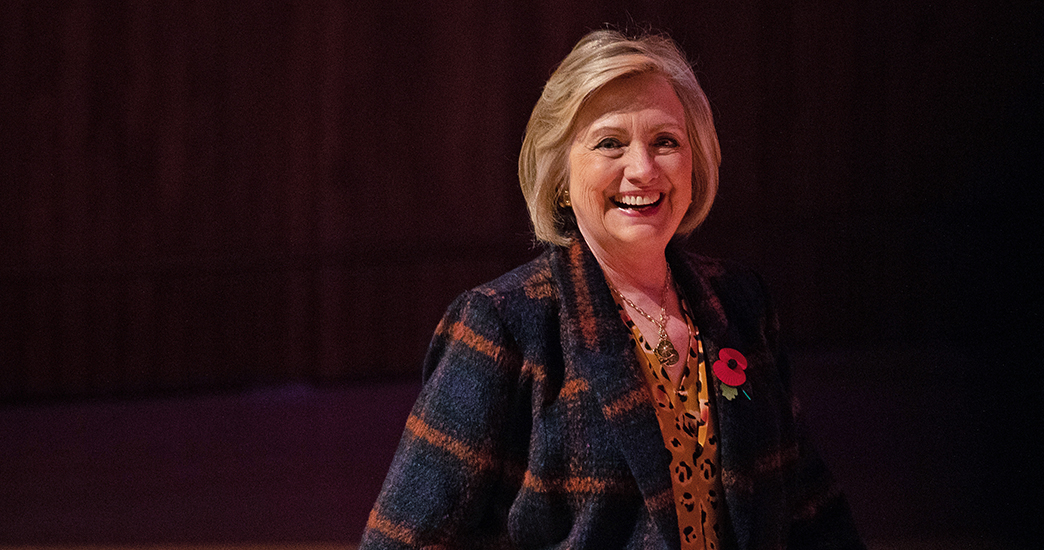 Hillary Clinton, pictured in London on Nov. 10, is among the Democratic voices speaking out against White House senior adviser Stephen Miller. (Photo by Aaron Chown/PA Images via Getty Images)

Others followed suit, including: Senator Bernie Sanders (I-Vt.), who called “Miller’s white nationalist views a danger to the American people”; former Secretary of State Hillary Clinton, who referred to Miller as a “white supremacist”; Representative Earl Blumenauer (D-Ore.), who demanded Trump fire Miller immediately; Democratic presidential candidate Julián Castro, who referred to Trump and Miller as “a shame to our nation”; and, finally, Senator Amy Klobachar (D-Minn.), who charged that Miller’s continued role in shaping immigration policy was “evil.”

Conservative commentator Tiana Lowe argued in a Washington Examiner op-ed that it was “long past time for Trump to dump Miller.” New York Post columnist Sohrab Ahmari echoed Lowe, noting that even though conservatives had allegedly faced “bogus” allegations of racism in the past, “this was something else.” Others were more colorful in their commentary. Longtime GOP consultant John Weaver referred to Miller as the “junior Grand Wizard” of the Trump administration. 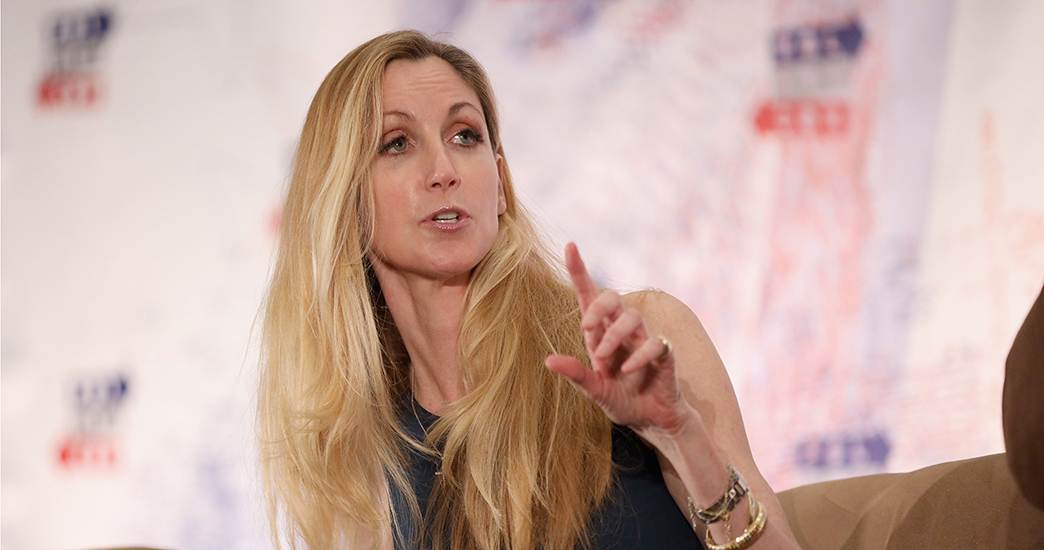 Others, though, continued to back Miller. Far-right commentator Ann Coulter defended the White House, saying that Miller was merely “enforcing laws on the books.” The white nationalist and anti-immigrant site VDARE, meanwhile, argued that “Miller doesn’t read us enough.”

The White House attacked the SPLC as a “far-left smear organization,” though as of Tuesday evening the administration’s press secretary, Stephanie Grisham, was still telling reporters that she had “not seen the report.” Axios reporter Zach Basu reported that another White House Official told him on background that “this is clearly a form of anti-Semitism to levy these attacks against a Jewish staffer.”