Washington state Rep. Matt Shea has been vocal about his support for antigovernment and anti-public lands activists in the West, and a new report alleges those activities pose a threat of “political violence” against the U.S. government.

An investigation commissioned by the Washington House of Representatives concluded that Shea has close ties to the antigovernment extremist movement and took part in three standoffs against the federal government.

The 108-page report, released Thursday night, details how Shea, a Spokane Valley Republican from eastern Washington, took part in standoffs between antigovernment extremist militias and activists and the federal government in Nevada, Idaho and Oregon in 2014, 2015 and 2016, respectively. 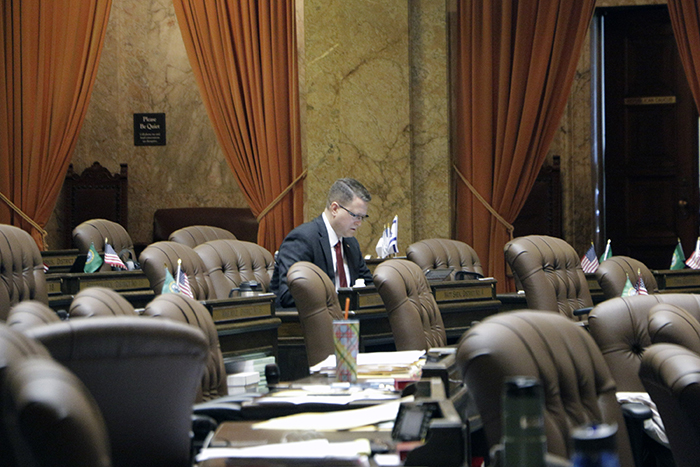 “Representative Shea was given an opportunity to communicate with investigators and chose not to,” Wilcox said in a statement. “Allegations this serious, many supported by his own communications and associates, justify this immediate action.”

The report details Shea’s alleged role in the armed standoffs between antigovernment rancher Cliven Bundy, his family and supporters and federal agents at Bunkerville, Nevada, in 2014; an armed conflict at a veteran’s home in Priest River, Idaho, in 2015; and his actions during the standoff between Ammon Bundy and other militia members and the federal government at Malheur National Wildlife Refuge in 2016 near Burns, Oregon.

“In one conflict Representative Shea led covert strategic pre-planning in advance of the conflict; continued support to an armed occupation conflict of a Federal Government facility that lasted 41 days resulting in devastating financial, physical and emotional harm to a community and its residents; and the loss of one life,” wrote Kathy and Paul Leodler, senior investigators with the Rampart Group, referring to the 2016 occupation at Malheur. The Rampart Group is an outside firm hired to probe Shea’s connections to the militia movement.

Shea declined to speak with investigators, the report said. His attorney, Mark Lamb of Bothell, Washington, did not immediately return a phone call and email from Hatewatch seeking comment.

Shea is depicted in the report as an active participant, and sometimes leader, in organizing and encouraging militia and antigovernment groups during the standoffs.

Shea went to the standoffs in Bunkerville, Priest River and Malheur in support of the antigovernment activists, investigators concluded.

In one instance cited in the report, Shea took to Facebook to comment on the ending of the standoff at Malheur, where one antigovernment activist was killed: “After much prayer, I’m afraid violence might be necessary to take our country back.”

The report concluded that Shea took part in counterintelligence gathering and opposed the legal actions of state and federal law enforcement. The investigators also wrote that Shea has ties to the antigovernment militia movement, including Three Percenters and Oath Keepers.

The report referred to a document Shea wrote called the “Biblical Basis for War.” In it, he advocates for a theocracy that would bind citizens to his interpretation of “Biblical law.” “If they do not yield – kill all males,” Shea wrote.

Shea also has pushed to partition central and eastern Washington into a 51st state called Liberty.

Investigators found that Shea took part in antigovernment and intimidation tactics from at least 2012 to 2019 and used the code name “Verumbellator” (“true warrior” in Latin) to try and disguise his activities.

Shea is something of a celebrity within the antigovernment-inspired American Redoubt movement and for years has taken to propagating anti-Muslim bigotry, including forming the Spokane chapter of the anti-Muslim hate group ACT for America.