Elliott Kline, the onetime leader of Identity Evropa, is in federal custody after being found in contempt of court for failing to cooperate in a civil lawsuit stemming from the violent “Unite the Right” rally.

Moon filed an order Monday indicating that Kline had turned himself in. 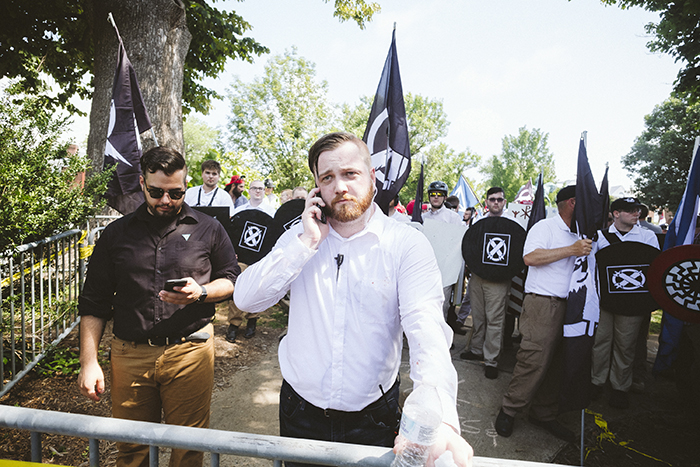 The contempt citation, which also carries a $600 fine, comes in a lawsuit filed by 10 Charlottesville, Virginia, residents alleging injuries during the Aug. 12, 2017, white nationalist gathering.

After months of orders and negotiations, Moon held Kline in contempt in December, citing Kline’s refusal to turn over electronic devices and passwords as part of the pre-trial process in the lawsuit.

“In short, Kline has not shown that he has taken ‘all reasonable steps to ensure compliance’ with this Court’s and Judge (Joel) Hoppe’s orders, and to purge himself of civil contempt,” Moon wrote in a six-page order. “Nor has he shown he is otherwise unable to comply with such orders.”

Kline, in court filings, has given multiple reasons for not turning over the electronic devices and passwords, including that he’s changed phones and that the passwords were lost.

In a last-minute court filing Monday morning, Kline said he’s turned over all email and social media accounts he has access to and all phones he used during Unite the Right.

“I believe I have completed all of the Plaintiff’s and Court’s requirements to purge myself of contempt and completed my discovery obligations,” Kline wrote.

Moon held Kline in contempt Nov. 27 and gave him until Monday, Dec. 16, to turn over all the devices sought or go to jail until he did so. Moon also issued a $200 a day fine for each day Kline didn’t comply with the order to surrender the devices. The U.S. Marshals have Kline in custody in Charlottesville.

Kline isn’t the only defendant who has chosen not to cooperate with the court. Robert “Azzmador” Ray, a neo-Nazi writer and podcaster who has worked for the Daily Stormer, and neo-Nazi podcaster Christopher Cantwell have been dropped by their attorneys for refusing to cooperate as part of the lawsuit.

In addition to the fine Kline has been issued, his failure to cooperate can also have a harsh legal impact.

It can result in Moon issuing an “adverse inference” order to jurors, essentially telling the jury to adopt the plaintiff’s position on what may have been on Kline’s phone and computer concerning Unite the Right.

For others, the refusal has resulted in default judgments. Daily Stormer proprietor and neo-Nazi Andrew Anglin, alt-right personality Augustus Invictus and both the Fraternal Order of Alt-Knights and the Loyal White Knights of the Ku Klux Klan have forfeited their rights to present a defense at trial by not responding to the civil lawsuit.

Kline is among 26 people and groups sued in 2017 after the Unite the Right rally.

Plaintiffs in the case are trying to show that the Unite the Right rally wasn’t a case of free speech, but rather an organized call to violence by white supremacists, white nationalists and racists generally.

The crux of the case is that the violence of Unite the Right was premeditated, making the actions of Aug. 11-12, 2017, evidence of a conspiracy.

The rally, a big public push by the alt-right, featured a torch-lit march by white supremacists chanting “Jews will not replace us” and saw a follower plow a car into a crowd, killing 32-year-old counterprotester Heather Heyer. James Alex Fields Jr., a 22-year-old from Maumee, Ohio, is serving multiple life sentences in a federal prison in West Virginia for Heyer’s death.

Delays by defendants in turning over phones, computers and other electronics have resulted in the trial being postponed once. Originally scheduled to begin July 8, 2019, it is now slated to start Oct. 26.

Editor’s Note:  An earlier version of this article referenced Jeff Schoep, his participation in discovery in the civil lawsuit, and the existence of a second mobile phone belonging to Mr. Schoep. Mr. Schoep states that he was never in possession of a second mobile phone and that the only phone that he had was submitted to the court. Hatewatch apologizes for the error.