An “alt-right” think tank run by one of the country’s most prominent white nationalists has mysteriously gone quiet and appears to be in disarray.

The National Policy Institute, led by Richard Spencer since 2011, has posted just one new article on its website in the past year. The NPI has also lost its tax-exempt status. It lost its active-status corporation designation in Virginia in 2018 and in Montana three years earlier.

The Alexandria, Virginia-based organization has also lost two key Spencer associates. A longtime ally, Evan McLaren, resigned as executive director of NPI in April 2018, less than a year after taking that post. He hasn’t been replaced. 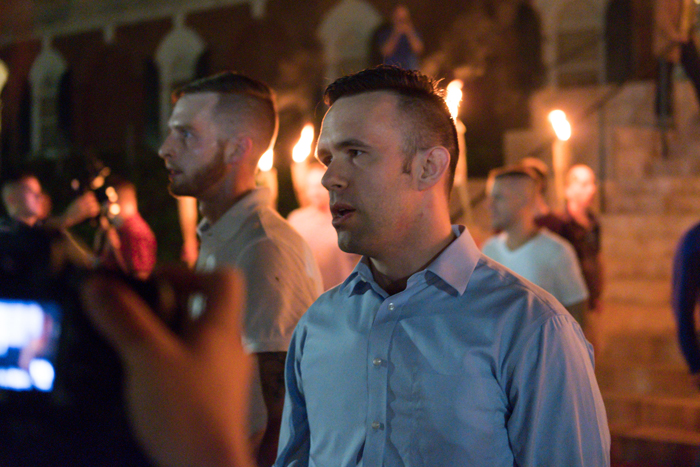 Evan McLaren of the National Policy Institute was one of the leaders of a torch-lit march in August 2017 in which hundreds of Unite the Right attendees yelled Nazi slogans as they paraded through the University of Virginia campus in Charlottesville, Virginia. (Photo by McCausland Havens)

Another Spencer ally, Greg Conte, walked away in August 2018 from Washington Summit Publishers, which is also run by Spencer and was founded by William Regnery II.

Regnery, an heir to a publishing fortune and a major funder of the white nationalist movement, founded the NPI in 2005 and also founded the Charles Martel Society, which publishes the racist, antisemitic journal Occidental Quarterly, in 2001.

The apparent collapse of the NPI comes as Spencer has faded from the headlines following a period when the white nationalist movement – rebranded as the alt-right – was energized by the campaign and presidency of Donald Trump. Two weeks after the 2016 election, at an NPI conference he held just blocks from the White House, Spencer famously prompted Nazi salutes and shouts of “Hail Trump! Hail our people! Hail victory!” from supporters among a crowd of about 200.

Spencer declined to comment for this article. “I don’t communicate with the SPLC,” he wrote in an email.

Spencer was a leading alt-right figure in 2015 and 2016 during the runup to the election, as Trump injected the movement’s white nationalist rhetoric into mainstream politics – describing Mexicans as “rapists,” for example.

In 2014, Spencer donated to then-U.S. Rep. Ryan Zinke’s congressional campaign and in 2016 discussed running for Zinke’s seat when the Montana congressman was named Interior secretary by Trump. “This would be an insurgent campaign,” Spencer told the Los Angeles Times. My candidacy would be something everyone would be talking about and would observe.”

The NPI describes itself as “dedicated to the heritage, identity, and future of people of European descent in the United States, and around the world.”

In 2017, Spencer launched a college speaking tour, which resulted in only a handful of appearances after sparking student protests and meeting resistance from university administrators. After an Oct. 19 appearance at the University of Florida, three of his supporters were arrested for attempted murder; police said they heckled protesters with Hitler chants and Nazi salutes before firing a gunshot.

In August 2017, Spencer was billed as the headline speaker at the deadly “Unite the Right” rally in Charlottesville, Virginia. The rally, ostensibly to protest the proposed removal of two Confederate statues, brought hundreds of white supremacists to the college town and devolved into a series of skirmishes, after which Trump insisted there were “some very fine people” among the racists. James Alex Fields Jr., a 22-year-old neo-Nazi from Ohio, would later plead guilty to killing 32-year-old Heather Heyer when he plowed his car into a group of anti-racist counterprotesters. Fields and eight other people who attended the rally are in state or federal prison after being convicted of a variety of crimes.

Spencer wasn’t accused of any criminal wrongdoing related to Charlottesville. But he and more than two dozen others are defendants in a civil lawsuit brought by people injured during the rally. The lawsuit, along with documents and depositions released as part of it, have shown divisions within the alt-right movement, as groups have stopped holding rallies together and some people have sworn off contact with each other.

Following the Charlottesville rally, Spencer’s ability to raise funds has been hampered after he was kicked off Facebook and major fundraising sites. 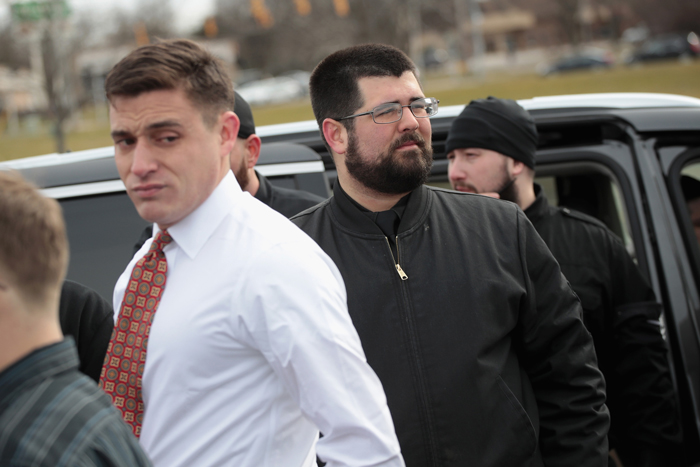 Several allies from Unite the Right – including Matthew Heimbach, the one-time head of the Traditionalist Worker Party; Jeff Schoep, the former chief of the National Socialist Movement; and career neo-Nazi and former Klan leader David Duke – did not respond to questions about Spencer sent to them via email and text by Hatewatch.

Jason Kessler, a white nationalist who organized the Unite the Right rally, responded, saying that “I no longer associate with Mr. Spencer or know of his activities.”

The most recent article on the NPI website was posted Dec. 15, 2019, three months after Hatewatch began asking questions about the nonprofit’s status. The previous post was from Nov. 6, 2018.

The website still says Spencer is “President and Creative Director” but lists no other officers.

The NPI last filed a tax return in 2016. The IRS revoked the group’s tax-exempt status in 2017, restored it in 2018 and currently lists its status as revoked. To maintain tax-exempt non-profit status as a 501(c)(3) organization, a charity or company must file tax returns annually. 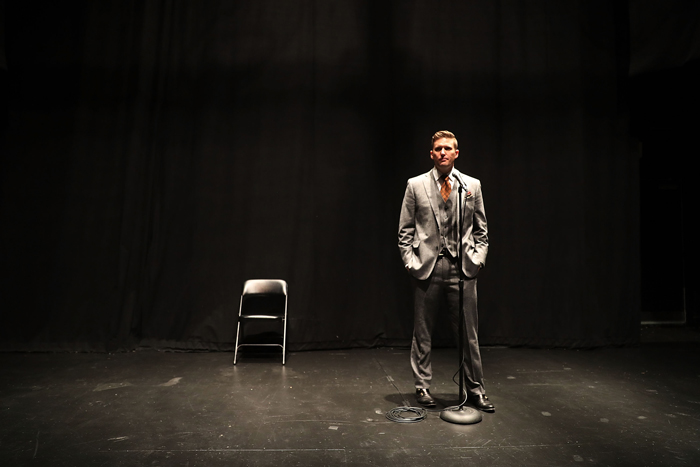 White nationalist Richard Spencer, who popularized the term "alt-right," speaks during a press conference at the Curtis M. Phillips Center for the Performing Arts on Oct. 19, 2017, in Gainesville, Florida. (Photo by Joe Raedle/Getty Images)

The NPI may have abandoned its last known mailing address in Alexandria, Virginia. An Aug. 30 court filing in the lawsuit involving the Unite the Right rally shows that attempts to send legal documents to the address were returned as “undeliverable.”

Matthew Parrott, a former close associate of both Heimbach and Spencer, continues to see a future for Spencer, with or without NPI.

“Richard has been at this for a decade, well before Trump,” Parrott told Hatewatch. “And he’ll be around long after Trump’s been defeated or impeached or whatever.”