White nationalists and neo-Nazis largely supported a series of antisemitic attacks that sparked fear and outrage across the New York metropolitan area at the close of 2019, a Hatewatch review of their correspondences determined.

The statements from organized racists are noteworthy due to the racialized nature of two prominent attacks that took place in December 2019: The suspects accused in both incidents are black.

Two black suspects allegedly shot and killed four people in a Jersey City, New Jersey, kosher supermarket on Dec. 11, 2019, and another allegedly attacked Hasidic Jews at the home of a rabbi in Monsey, New York, on Dec. 28, 2019. Both incidents brought renewed attention to a spike in antisemitic hate crimes taking place not only in and around New York City, but also nationwide. Hate crimes targeted Jews above any other group in New York, Los Angeles and Chicago during 2019, according to research conducted by the Center for the Study of Hate and Extremism (CSHE) at California State University, San Bernardino. 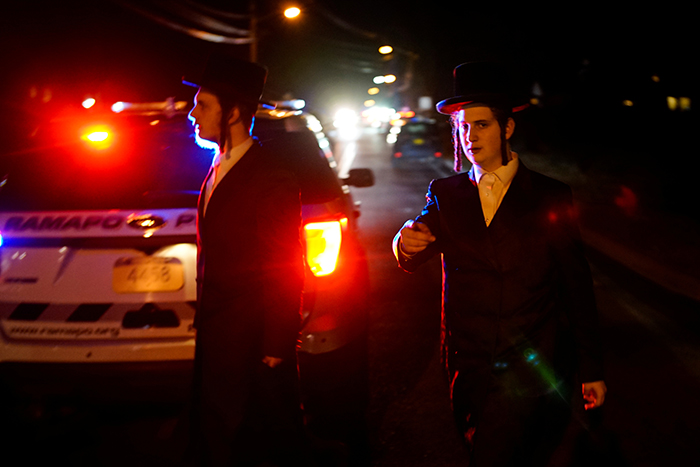 White nationalists, who regularly produce a deluge of propaganda that is both antisemitic and depicts black people as violent criminals, used the attacks primarily to focus on sharpening their attacks on Jews.

Peinovich stopped short of endorsing the Dec. 28 machete attack on his show but nevertheless admitted to laughing at what he described as a video of a man punching an Orthodox Jewish person.

Neo-Nazis on the messaging app Telegram praised the attackers outright. One channel run by a pseudonymous internet personality referred to the suspects as “based Synagogue Stabbers” after the Monsey machete attack.

One neo-Nazi channel on Telegram attached to a group that promotes committing acts of terrorism republished a list of “non-white heroes” written by someone going by the name Bobby Bowie on Dec. 11, 2019. The list included the names of the suspects of the Jersey City shooter attack next to the tagline, “3 K***s, 1 Cop,” referring to the victims of the attack.

Another Telegram channel that traffics in neo-Nazi propaganda posted a series of videos following the attacks that highlighted black speakers voicing criticisms of Jews, appearing to portray them as allies in a shared struggle.

Commenters on the private forum for the neo-Nazi website The Daily Stormer took a similar tone about the story across dozens of posts in the aftermath of the Monsey attack.

“What a fantastic end to 2019,” a pseudonymous poster going by the name WhiteShariaEnforcer. “Black k*** slayers sending white pills to the goyim.”

“White pills” refers to an event that is positive or hopeful for white nationalists. “Goyim” refers to non-Jews.

White nationalists and neo-Nazis have been arrested for executing or plotting antisemitic acts of intimidation and even terror in recent years – allegedly fueled by propaganda that dehumanizes Jews or targets them with violence.

The list of these incidents includes the Tree of Life synagogue terror attack in Pittsburgh, Pennsylvania, in October 2018. Police arrested a 46-year-old man who frequented the extremist-friendly social media site Gab, for allegedly shooting and killing 11 people during Shabbat morning services. The accused pleaded not guilty to 19 different charges in February 2019 and is currently awaiting trial.

Police say a 19-year-old man fired his gun into a synagogue in Poway, California, in April 2019, killing one and injuring three others. The same man may have also targeted Muslims, and is suspected of setting fire to an Escondido, California, mosque in March 2019. The suspect allegedly immersed himself in hateful propaganda on the now-defunct forum 8chan, and also published a manifesto to that site heralding the attack. He pleaded not guilty to charges of murder, attempted murder, arson and allegations of a hate crime in October 2019.

Thwarted terror plots received considerably less media attention in 2019, but still happened with relative frequency: James Reardon, an alleged white nationalist, pleaded not guilty to charges related to making threats against a Jewish center in Youngstown, Ohio, in August 2019. Alleged neo-Nazi Conor Climo pleaded not guilty in September 2019 after the FBI arrested him on charges related to a plot to bomb Jewish and gay communities in Las Vegas. Richard Holzer, 27, pleaded not guilty in November 2019 to charges related to threatening to bomb a synagogue in Pueblo, Colorado. Holzer allegedly posted pictures of himself draped in neo-Nazi symbols to Facebook prior to his arrest. All three men are currently awaiting trial.