Gun-rights activists and antigovernment extremists are planning a protest in Richmond, Virginia, on Monday fueled by antigovernment conspiracy theories and accompanied by online calls for violence.

In advance of the protest, Virginia’s governor preemptively barred guns on the capitol grounds.

Gov. Ralph Northam also declared a state of emergency before the expected protest. 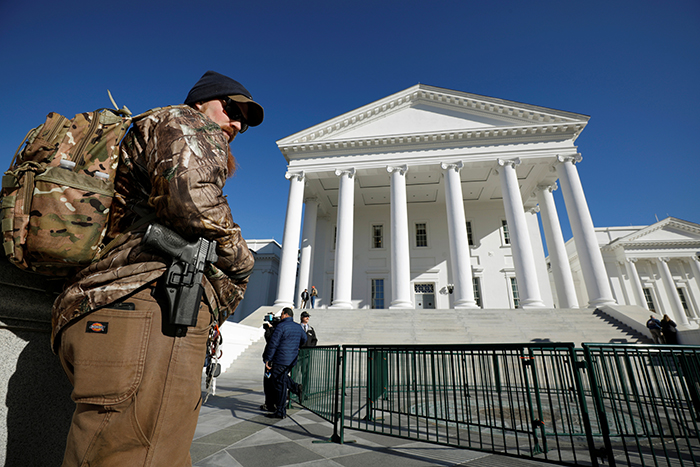 A gun-rights activist carries his handgun in a hip holster Jan. 8 outside the Virginia State Capitol building in Richmond, Virginia. (Photo by Jonathan Drake/Reuters)

Those threats of violence have been rampant among antigovernment and far-right groups online. The Virginia Militia, a Facebook group that shares antigovernment memes, posted a paid Facebook advertisement featuring a gallows and three hanging nooses. Beneath the photo is the caption “Government Repair Kit.”

Other elements of the far right have weighed in with even more overt calls for violence. On a Facebook page belonging to Patriot Prayer, a group that along with the Proud Boys hosted a series of demonstrations in Portland, Oregon, that frequently turned violent, one group member wrote of Gov. Northam, “Shoot this f----- in the head.”

On Telegram, the event is being lauded by a subset of white nationalists and neo-Nazis that have enthusiastically endorsed violence and terrorism as a means to their political ends. One channel has posted the names of Jewish lawmakers in Virginia who have spoken out in favor of stronger gun regulations. The Justice Department said Thursday that three men were taken into custody by the FBI amid an investigation into the white nationalist group The Base. According to officials, the men had weapons and had talked about possibly traveling to Richmond to attend the rally.

The event is underpinned by antigovernment conspiracy theories. Conspiracies related to QAnon, rumors that the governor plans to turn off the power grid and perennial speculation about mass gun confiscations have all made the rounds online. VICE’s Tess Owen reported that the decades-old far-right conspiracy about the “New World Order” is cropping up online in the leadup to the event. Groups are circulating a 2016 photo of U.N. trucks as “evidence” that the state of Virginia is bringing in U.N. troops to subvert the will of the people and overthrow the U.S. government.

Although Monday is a state holiday, it has become a traditional day for interest groups to lobby state lawmakers on specific issues. The planned protest is leveraging this so-called Lobby Day for their demonstration.

The Lobby Day event, organized by the Virginia Citizens Defense League (VCDL), has drawn the interest of at least 33 militia groups from across the country.

Emails and Facebook messages sent to VCDL with questions about the prospect of antigovernment groups taking part in the demonstration drew a response with links concerning parking, an explanation of Lobby Day and a link to purchase swag from the organization.

“Various militia groups from Virginia and nearby states have graciously volunteered to provide security,” Van Cleave wrote. “With a large Capitol, Richmond, and State police presence, not to mention enough citizens armed with handguns to take over a modern mid-sized country, we have the security base covered nicely.”

The leader of the Oath Keepers, a radical antigovernment group that stews in conspiracy theories, issued a call on Facebook for members to turn out to protest the gun control measures.

The Virginia General Assembly has a Democratic majority for the first time since 2014. The legislature, along with Democratic Gov. Ralph Northam, are moving to pass stricter gun regulations.

These moves have met with opposition by local governments in the state that have declared themselves “Second Amendment Sanctuaries.”

The idea, inspired by the “sanctuary cities” movement meant to protect undocumented immigrants from federal immigration enforcement, is aimed at stopping or slowing the impact of new state and federal gun legislation.

Local media reports that 86 of Virginia’s 95 counties have adopted some version of the measure.

“It is my opinion that these resolutions have no legal effect,” Herring wrote on Dec. 19, 2019. “It is my further opinion that localities and local constitutional officers cannot nullify state laws and must comply with gun violence prevention measures that the General Assembly may enact.”

Those legal maneuverings set the stage for the planned rally on Jan. 20.

What exactly will happen when these groups converge remains to be seen. The attitudes about the legislation and the march vary, depending on who is talking and the motivation of each group, from simple single-gun ownership to antigovernment extremists promoting conspiracy theories.

And the militias, gun activists and others won’t be alone in lobbying on gun bills.

The organization March for Our Lives, a gun-control advocacy group started in the wake of a mass shooting in Parkland, Florida, is planning a vigil on the state capitol grounds the same day.

Multiple pages have popped up on Facebook promoting the militia march, and antigovernment militias from around the country are encouraging members to attend, while hurling accusations of treason at government officials.

“Time to stand is here,” Jeff Kessler, an auto worker from Bellefontaine, Ohio, wrote on the Militias March on Richmond Facebook page. “They are coming for our guns!”

Militia groups, such as the South Carolina Light Foot Militia Special Response Team, are using Facebook videos to discuss planning. The groups talked about staying safe during what could be a dangerous day.

The same organization accuses Virginia lawmakers of treason and posted a picture featuring a deck of cards with the picture of former Iraqi dictator Saddam Hussein on it. The Bush administration used the cards to promote rewards for the capture of Iraqi leaders.

“I have an idea,” wrote group administrator John Cody, who identifies himself as “Hawkeye” on the group’s page.

“Is there a way we can alter these for all of the government dogs who are guilty of treason against the Constitution?” the text across the photo says. “Let’s make this a thing.”

The gathering has drawn concerns from some protestors about a repeat of the deadly “Unite the Right” rally an hour away in Charlottesville on Aug. 12, 2017. At that event, the rally descended into a series of skirmishes, some armed. During the rally, 22-year-old James Alex Fields Jr. plowed his car into a crowd of counterprotesters, killing 32-year-old Heather Heyer.

Northam, in issuing the state of emergency, noted that Heyer and two state troopers died that day.

“We must take all precautions to prevent that from ever happening again,” Northam said.

The rhetoric in advance of the rally has ranged from borderline violent to conspiratorial to calls for peace.

Tammy Lee, a self-appointed organizer of the march who attended Unite the Right alongside the “alt-right” and neo-Nazis, took to the Militia March on Richmond Facebook page in an attempt to tamp down expectations of revolution or violence.

“You’re turning this lobby day into your own theatrical arena,” Lee said in reference to people advocating for violence. “We will never get away from Charlottesville … if we don’t stop acting like we are getting ready for Charlottesville.”

Richmond Police referred questions to the state capitol’s Twitter feed, which has information about parking on Lobby Day.