Far-right extremists – from antigovernment activists and heavily armed militias to organized hate groups – came together Monday for a show of force in Richmond, Virginia, to oppose statewide gun safety proposals.

Extremists were sprinkled throughout a crowd of roughly 22,000 gun-rights activists that converged on a four-block-by-three-block area around the state capitol building on Lobby Day – an annual tradition in Virginia for citizens to meet lawmakers and discuss issues.

The Virginia Citizens Defense League (VCDL), a pro-gun group that bills itself as a stricter opponent of gun laws than the National Rifle Association, organized the Lobby Day. Extremists and hate groups latched on to the event, making a show of force. 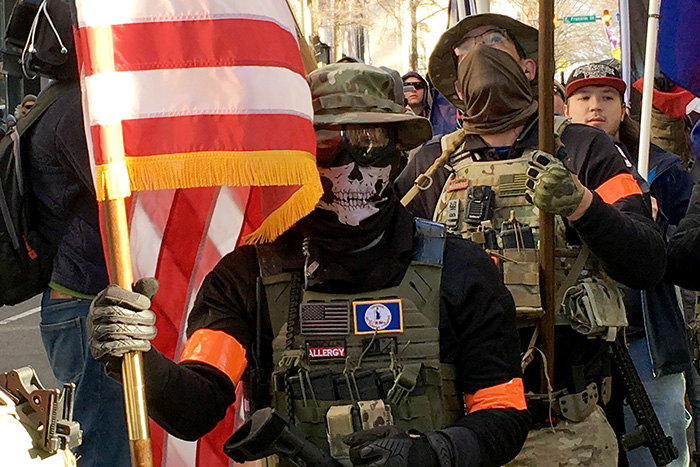 And while photographs that captured the sheer size of the crowd appeared to show a unified front around the single issue of guns, the far right’s belief in foundational antigovernment conspiracy theories set them apart from the rest of the crowd.

Gov. Ralph Northam, a Democrat, declared a state of emergency several days in advance of Lobby Day. Northam cited out-of-state militia and hate groups who announced plans to attend the rally, fly drones over the capitol and storm the building.

“We have received credible intelligence from our law enforcement agencies that there are groups with malicious plans for the rally that is planned for Monday,” Northam said in a press conference Jan. 15.

In the days leading up to the rally, the FBI arrested multiple members of “The Base,” a white nationalist group where some members hold neo-Nazi beliefs. Court documents show some members discussed attending the rally in Richmond with the intent of killing people.

At least two Virginia sheriffs joined the protesters. Culpeper County Sheriff Scott Jenkins and Grayson County Sheriff Richard Vaughan stood with the protestors. Both echoed words often used by the “constitutional sheriff” movement, which purports that sheriffs are the highest-ranking law enforcement officers in the country and have an obligation to refuse to enforce laws deemed unconstitutional by the antigovernment movement’s idiosyncratic interpretation of American law and history.

“We are the last line of defense in defense of our county when it comes to Second Amendment issues,” Vaughan said. “If the bills go through as proposed, they will not be enforced; they’re unconstitutional.”

While sheriffs have wide power at the county level, they are not empowered to pick and choose which laws to enforce based on personal preference.

The appearance of the sheriffs coincided with a move by multiple Virginia counties to declare themselves “Second Amendment Sanctuaries.” The move, which Virginia Attorney General Mark Herring ruled carries no legal weight, is a way of local officials saying they will not comply with gun regulations they do not agree with.

Many antigovernment groups, including militias, have been openly advocating for county sheriffs across the country not to enforce any of the new gun laws. Some believe use of force is necessary if sheriffs are forced by the government to comply with its laws.

Oath Keepers leader Stewart Rhodes, whose group attended the rally, backed the sheriffs in advance of Lobby Day, saying on a radio show that counties should decide that none of the proposals by the new Democratic legislative majority are legitimate and declare their independence. 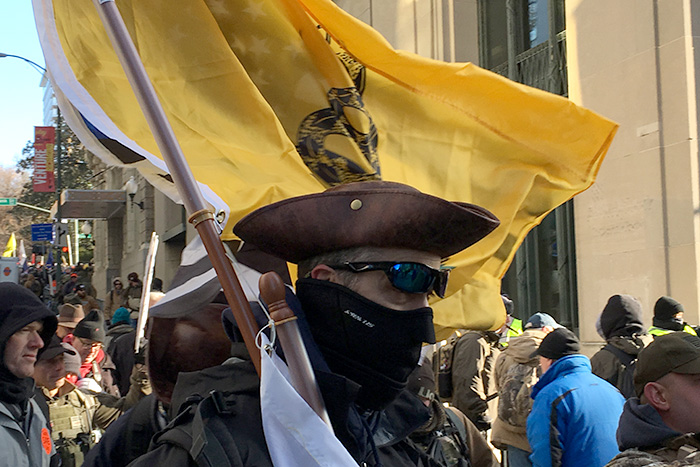 A protestor carrying a Gadsden flag with the legend "Don't Tread on Me" marches near Capitol Square in Richmond, Virginia, on Jan. 20. Heavily armed militia members, extremists, conspiracy theorists and hate groups joined gun owners to form a crowd of about 22,000 for Lobbying Day. The Virginia General Assembly is considering measures that would impact gun ownership in the state. (Photo by Brett Barrouquere)

While open racism was minimal in the signs and flags, there were some antisemitic overtones in signs referencing former New York Mayor Michael Bloomberg, who is running for president as a Democrat, and George Soros, a Hungarian-American philanthropist of Jewish descent.

“We the people do not want your Unconstitutional Legislation!” one sign read. “Get the Dirty Bloomberg & Soros Money Out of Virginia!”

Soros has become sort of an all-purpose boogeyman for the radical right.

The mood of the rally was mostly collegial, with jokes, political discussion and snark dominating the conversations among hate and extremist groups and militias.

“Got some blow?” a man wearing a Proud Boys hat asked a reporter from Hatewatch. “We could use some blow.”

Joe Kee, a follower of the John Birch Society from Chesapeake, Virginia, said the issue of gun control went beyond Virginia and that his home state may be leading the charge to try and take away weapons along with a resistance to such legislation.

“They say California is the first of everything, but in this case, Virginia may be the start of this movement,” Kee told Hatewatch. “This is fantastic.”

The John Birch Society is a foundational antigovernment extremist group formed in the 1950s.

Group members are hard-line conspiracy theorists who believe the United Nations is the enemy, define democracy as “mob rule” and believe socialism is communism. Recently, the John Birch Society promoted the great replacement theory in its publication The New American.

Down the street from Kee, the leader of the South Carolina Light Foot Militia Special Response Team, John Cody, sought with mixed success to bring his troops into formation.

“People with Militia March, listen up!” yelled Cody, who goes by “Hawkeye” online. Cody took to Facebook to organize folks using an event page he dubbed “The Militias March on the Capital.” The page served as a hub for updates regarding the VCDL lobby day and functioned as a way for Cody to get his updates out to fellow militiamen.

Many people were willing to talk with reporters but were reluctant to identify themselves. 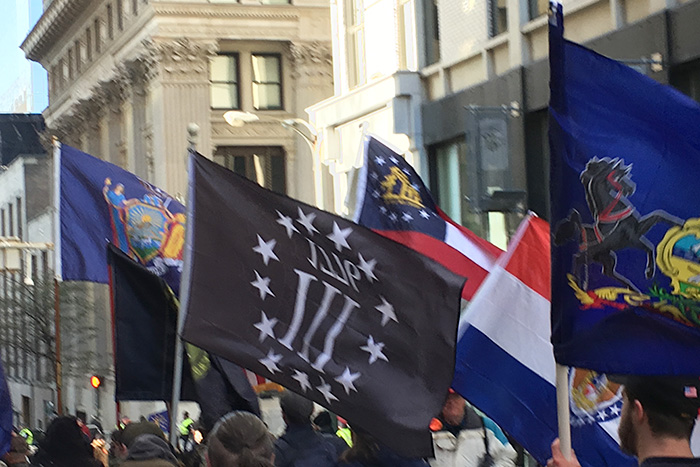 A crowd of about 22,000 massed at the Virginia State Capitol on Jan. 20 in an anti-gun legislation rally for Lobby Day. In the crowd were gun owners, heavily armed militia members, extremists, conspiracy theorists and members of hate groups. (Photo by Brett Barrouquere)

Flags flown by militias and antigovernment groups featuring the slogan “Come And Take It” overlaying a gun, “Don’t Tread on Me,” the III Percent Militia movement logo and the Oath Keepers logo fluttered in the wind as temperatures hovered in the 30s.

Inside the fence around the capitol lawn, speakers launched diatribes against the Democratic majority in the Virginia General Assembly for proposing gun legislation.

“Democrats in the state are demonstrating … unadulterated power without authority,” howled Erich Pratt, senior vice president of Gun Owners of America (GOA), an antigovernment organization that believes the federal government should be based around a version of “biblical law.”

Pratt’s father, Larry Pratt, who founded GOA – the self-styled “no-compromise alternative to the N.R.A.” – gave a speech at Estes Park, Colorado, in 1992 that some scholars describe as central to the creation of the militia movement in the 1990s.

As the speeches progressed, occasional chants of “USA! USA! USA!” and “We Will Not Comply!” broke out beyond the fence on the street where carrying weapons was permitted, but it is unclear if anyone on the street actually heard the speakers on the capitol lawn.

President Donald Trump, who spoke of “good people, on both sides,” in the wake of the deadly 2017 “Unite the Right” rally in Charlottesville, Virginia, tweeted a video from Richmond and “USA! USA! USA!” midway through the rally, echoing many of the chants at the rally.

In the days leading up to Lobby Day, conspiracy theorists talked of organized violence in opposition to the rally.

“They [Democrats] would love for it to degenerate to ‘violence, rioting, and insurrection’ in order to smear gun owners,” read an email from the Virginia Civil Defense League (VCDL), the organizing group for the Lobby Day gun rally. “Has the Democrat leadership actually invited violent groups to attend for the purpose of disrupting our peaceful assembly?”

“We have cracked the code,” claimed prominent far-right conspiracy propagandist Alex Jones during an InfoWars broadcast two days before the rally. “We understand the globalist false flag operation plan for next week. We all wonder, ‘Why did [House Speaker Nancy] Pelosi rush impeachment then hold it back for almost a month?’ They were lining it up for Martin Luther King Day because a yearly gun march, it’s happened for twenty years in Virginia at the capitol. They’re planning to stage mass shootings, bombing or false flags to try to turn the American people against gun owners and President Trump.”

“It looks increasingly likely that Virginia is going to be the flashpoint for the start of America’s second civil war,” read an article posted by Mike Adams of the antigovernment conspiracist website Natural News. “It’s the government itself that operates as a terrorist organization.”

At least 18 militias and 34 hate and extremist groups tracked by Hatewatch turned out for the protests that day, with some pledging violence in the face of proposed gun regulation by the Virginia General Assembly.