The agreement between Duke and William Burke of Athens, Ohio, is the first between a participant in the racist rally and an injured counterprotester.

Burke sued Duke and eight others in federal court in Ohio over injuries he suffered after 22-year-old James Alex Fields Jr. drove his car into a crowd following the Aug. 12, 2017, Charlottesville rally. Fields was convicted of murder in the death of counterprotester Heather Heyer, who was among those in the crowd struck by Fields. 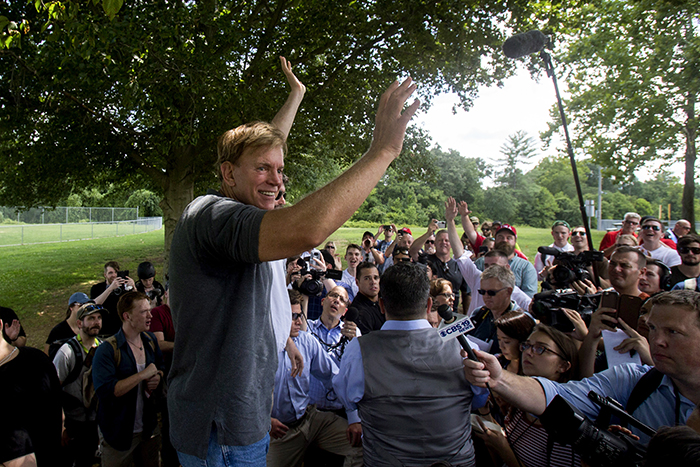 David Duke arrives to give remarks at the "Unite the Right" rally Aug. 12, 2017, in Charlottesville, Virginia. (Photo by Shaban Athuman /Richmond Times-Dispatch via AP Images)

The Jan. 22 judgment entry is not a settlement. Instead, it means that Duke will pay $5,000 to Burke in exchange for being dropped from Burke’s lawsuit. No admission of liability was attached to the agreement.

Burke accused Duke, a neo-Nazi and one-time Ku Klux Klan grand wizard, of conspiring with other white supremacists and white nationalists to organize Unite the Right.

Duke’s attorney, Kyle Bristow of Michigan, said in a press release that Duke denied the allegations in the lawsuit.

Duke did not return email or Twitter messages from Hatewatch. Duke fought the lawsuit, arguing that he had little to no role in planning the rally. In a statement released by Bristow following the judgment entry, Duke said he attended Unite the Right to “defend the heritage and rights of European-Americans.”

Ohio-based attorney Mike Fradin, who represents Burke, said in a statement from the same press release that the agreement is a win for Burke and a “step in the right direction” for those fighting white supremacy.

“He is not only a survivor but also a role model for civil rights activists,” Fradin said.

Duke’s attorney, Bristow, first became active in the white nationalist movement around 2007. The Michigan State chapter of campus group Young Americans for Freedom, which he led while an undergraduate there, was listed by SPLC as a white nationalist hate group while it was under his management. After Bristow went to law school in 2010, he started making a name for himself representing white nationalist figures.

Bristow also started the non-profit Foundation for the Marketplace of Ideas in 2016. In March 2018, his group planned a party and conference around white nationalist Richard Spencer’s speech at Michigan State University.

Spencer’s speech turned into a public relations disaster, with neo-Nazis, white nationalists and counterprotesters fighting outside the agricultural arena where Spencer spoke on campus.

At that same time, Bristow announced he was folding the Foundation for the Marketplace of Ideas, a sort of “alt-right” think tank, and walking away from the movement.

Bristow withdrew as counsel to Spencer’s booking agent, Cameron Padgett, in multiple suits against universities at around the same time. Padgett sued the schools in an attempt to force them to allow Spencer to speak on campus.

“In light of the recent relentless and unjustifiable vilification of me, as well as the mischaracterizations of who I am as a person, I have unilaterally made the decision to provide this clarification and to withdraw from politics,” Bristow wrote on the Foundation for the Marketplace of Ideas website on Feb. 7, 2018.

The Foundation for the Marketplace of Ideas’ 2018 tax returns listed $74,605 in expenses and revenues and no assets. It is no longer incorporated in Michigan and has not filed a 2019 tax return with the IRS.

Despite this brief disengagement, Bristow has recently resumed taking on white nationalist clients. In addition to Duke, Bristow represented Paul Nehlen, a former Wisconsin congressional candidate who has since become an outspoken neo-Nazi who openly praises racist violence.

Bristow got Nehlen dismissed from a federal lawsuit stemming from a tweet misidentifying the owner of the car who drove into the crowd in Charlottesville.

In 2019, Bristow returned to Twitter. His current profile features the Latin phrase “Murum aries attigit,” which translates to “The Ram has Touched the Wall.”

It refers to a policy of not allowing any mercy or surrender to the occupants of a fort once a battering ram begins the assault on the gate.

While he’s tweeted just three times in more than a year, the two people Bristow follows are telling: Spencer and Nick Fuentes, a white nationalist podcaster.