Harold Ray Crews, attorney and chairman of the North Carolina chapter of the neo-Confederate hate group League of the South, must attend a hearing Feb. 21 to determine whether the state bar association will suspend his law license.

The hearing marks a fall from grace for a man who has been a vocal proponent of the neo-Confederate movement for the past two decades.

Much of Crews’ history in the neo-Confederate movement was scrubbed from the web after questions about his legal practice emerged. A review of material archived by Hatewatch staff documents the ways Crews promoted online harassment and web trolling. He also fundraised and advocated for the creation of organizations designed to attack and discredit opponents.

Crews’ affiliation with the League of the South was first documented by Hatewatch in August 2017, days before Crews participated in the deadly “Unite the Right” rally in Charlottesville, Virginia. During that event, Crews was involved in an altercation that resulted in the gang beating of DeAndre Harris, a black man from Charlottesville.

Prior to this, Crews ran the League’s podcast “Southern Nationalist Radio,” the North Carolina League’s website and a YouTube page featuring Crews expounding on the virtues of so-called Southern nationalism.

Crews stepped into the role of North Carolina League chairman in September 2015, per a post on the group’s website by former chairman Bernhard Thuersam. In his farewell post, Thuersam noted Crews “has done equally important work in recording NC LS conferences and establishing a video record of our past events.”

Crews frequently devoted time and resources to helping develop online infrastructure to support the League. On Jan. 2, 2017, Crews took to a private League Facebook group to advocate for the creation of “a League/Southern nationalist troll army to strike back at our enemies.”

Harold Crews posted a call for a "troll army" to Facebook in January 2017.

Crews said the purpose of the troll army would be to give said “enemies” “reason to hesitate in attacking us.”

He continued, “I have never done any trolling but other alt-right organizations have had good results by striking back at anti-fa, [social justice warriors], and [the mainstream media]. If there is sufficient interest I will see if I can’t find resources in how to effectively troll if no one here has experience.”

Harold Crews encouraged other League of the South members to set up secure communications platforms in 2016.

On Oct. 16, 2017, Crews took to a closed League Facebook group to encourage members to set up their own secure communications platforms, and wrote, “Dr. [Michael] Hill, [president of the League] has asked me to put together a program on online security at the 2017 conference.”

Harold Crews solicited bitcoin donations for the North Carolina chapter of League of the South in 2016.

On Nov. 28, 2016, Crews created a bitcoin wallet for donations to create a “professionally done webpage.”

The next month, Crews set up a Discord server for the entire League. Discord, a gaming app, was at that time a crucial organizing hub for the racist right. 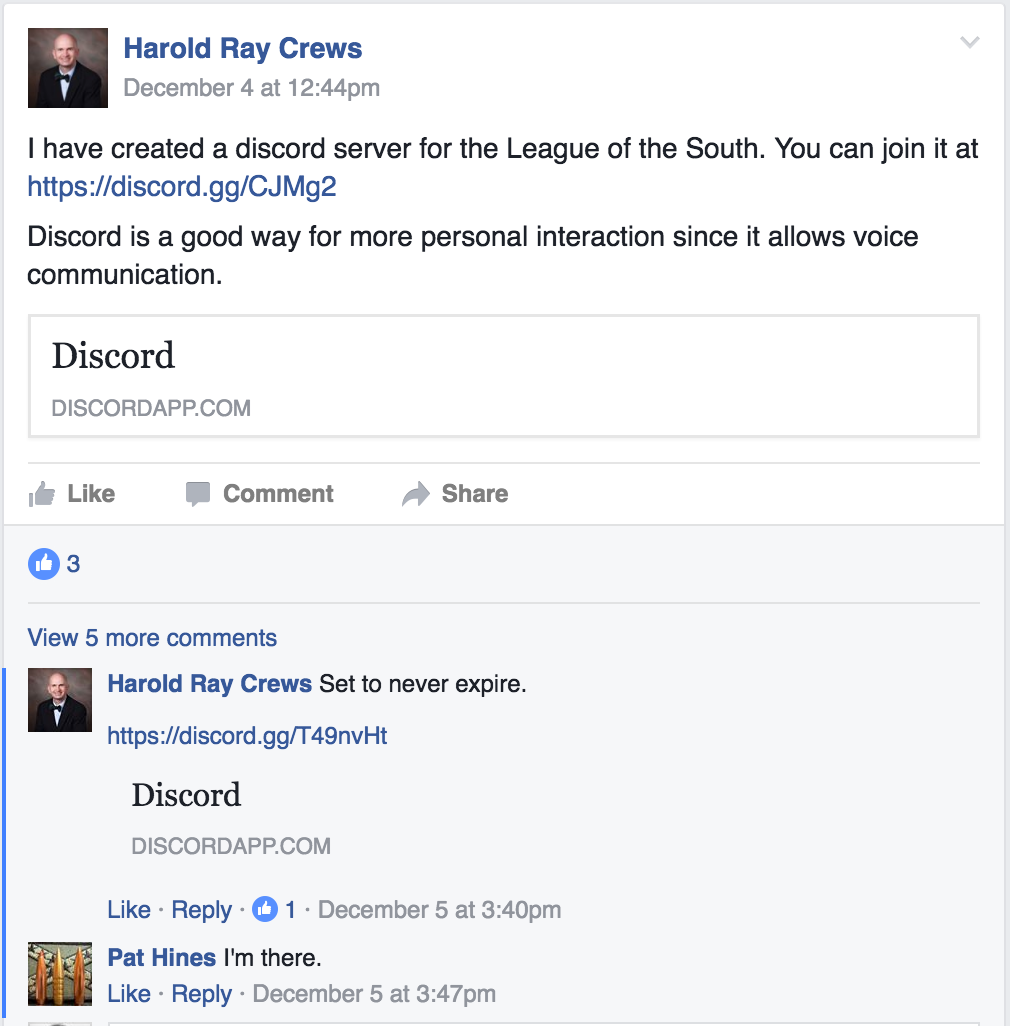 Harold Crews announced the creation of a Discord server for League of the South in 2016.

According to the League’s website, Crews addressed the June 23, 2017, “national conference” and provided a “LS Technology Report.”

Crews continued producing podcasts and videos for the League in the runup to the group’s appearance at Unite the Right. After Virginia Gov. Terry McAuliffe declared the event an unlawful assembly, Crews and a group of League members got into a fight with a group of counterprotesters. According to his attorneys, DeAndre Harris witnessed Harold Crews in a tug-of-war over a flag with one of Harris’s friends. Thinking his friend was under attack, Harris struck at Crews before he was beaten by a group of far-right protesters.

Authorities charged Harris with felony unlawful wounding two months after the incident based on Crews’ allegation Harris struck him in the face with a flashlight. Harris was later acquitted, but on the far right, the incident has continued to fuel a narrative of grievance.

Brad Griffin, a white nationalist blogger who also serves as the League’s “PR chief,” derided media coverage of Harris’ beating – which was captured on video and left Harris with a broken wrist and injuries to his head and spine – as a “race hoax.” The League touted propaganda images of Crews with a swollen face as proof of that narrative.

Crews himself promoted the narrative on the League’s podcast “Southern Nationalist Radio,” which he cohosted with Michael Hill, League president.

The media campaign around DeAndre Harris was not Crews’ only attempt at poisoning the well of public opinion.

On May 27, 2018, Crews published a proposal to pastebin.com for “Operation Samson,” his codename for a decentralized autonomous organization (DAO) that would fund opposition research against the far right’s “enemies.”

He wrote in the “Samson” proposal:

The primary purpose of the DAO would be to raise cypto-currency [sic] – probably Monero or Dash. These funds would be used to finance perfectly legal investigations into business leaders/institutions, religious leaders/institutions, media personalities/institutions, elected officials, and non-elected officials by professional investigators or to offer bounties to whistle blowers on these enemies. Many of these people are extraordinarily corrupt and would be weakened if not rendered harmless by unveiling their criminal, ethical, and moral lapses to the public. It would be very sweet justice for instance if Russell Moore of the [Southern Baptist Church] were targeted and brought down.

Crews does not appear to have had any success in launching “Project Samson,” and the original post has since been removed. The League’s podcast “Southern Nationalist Radio” can no longer be found on host site Libsyn. The YouTube channel where Crews uploaded League of the South promotional videos is practically empty, and the North Carolina League chapter’s website at northcarolinaleagueofthesouth.com has been taken down.

These artifacts of Crews’ time with the League all disappeared following a series of news articles publicizing Crews’ involvement with the League and his ongoing legal practice in Walkertown, North Carolina. Two trust accounts Crews set up in 2013 were audited in March 2018, which is when his legal woes began.

Crews has been barred from handling client’s money since July 19, 2019, per an injunction filed in the Wake County Superior Court by the North Carolina state bar. Crews was ordered to turn over records relevant to his handling of clients’ money amid an investigation into Crews’ legal practice and alleged misuse of funds. The February 2020 hearing stems from Crews’ refusal to turn over records in the investigation.

According to an article this month in the Winston-Salem Journal, Crews “is still licensed to practice law, but in an email to the State Bar, he said he has closed his law firm and has focused on document review.”

Crews’ professional website includes the following blurb in its “about me” section:

“I have transitioned my practice to solely preparing seller documents. This transition and since I work out of my home means I’m available by email or phone for extended hours and that I am more able to have a short turn around time on the preparation of your documents.”

Editor's note: An earlier version of this story misidentified Virginia's governor at the time of the 2017 "Unite the Right" rally as Ralph Northam. Northam is the current governor. Terry McAuliffe was the governor in 2017. We regret the error.