And yet for the weeks since the white nationalist non-profit VDARE purchased a historic castle overlooking the town of roughly 600 people from above a hill, some of the residents have started to organize a response to their new neighbor.

A dozen Berkeley Springs residents met with Hatewatch on March 12 at Fairfax Coffee House to express their frustrations and concerns with VDARE’s purchase of the castle, a 19th-century landmark beloved by the community. The meeting was the fourth such gathering of its kind, not including more informal discussions held sporadically elsewhere. Beyond those who planned or attended the March 12 meeting, more than a dozen other residents of the town expressed frustration to Hatewatch over the VDARE castle purchase, or independently sought advice on how best to counter the group’s message, either through in-person meetings, phone calls or by email.

“I was appalled after visiting their website,” Nicole Bell, who lives in the town, told Hatewatch in a face-to-face meeting in Berkeley Springs on March 13. “This is an organization with negative affiliations and it’s infuriating that the town got no heads-up about this purchase from anyone.”

Trey Johanson, the owner of Fairfax Coffee House, said the meetings at her establishment began with local business owners who were worried about the hate group’s impact on the town, and unimpressed with the response from Travel Berkeley Springs, a business membership organization that promotes tourism.

“Because business owners felt unserved by its membership organization in the fight to publicly oppose VDARE, we began outreach and meetings,” she said. “Once the word got out about the meetings of businesses, others in the community joined us.”

VDARE’s foundation bought the castle for $1,400,000 in February 2020 without the help of a loan, according to records reviewed by Hatewatch. The Berkeley Springs castle, also known as the Samuel Taylor Suit cottage, was built in 1885 and is included in the U.S. National Register of Historic Places, part of the National Park Service. The castle has long been open to the public and is among a series of sites with historic importance layered throughout the area. 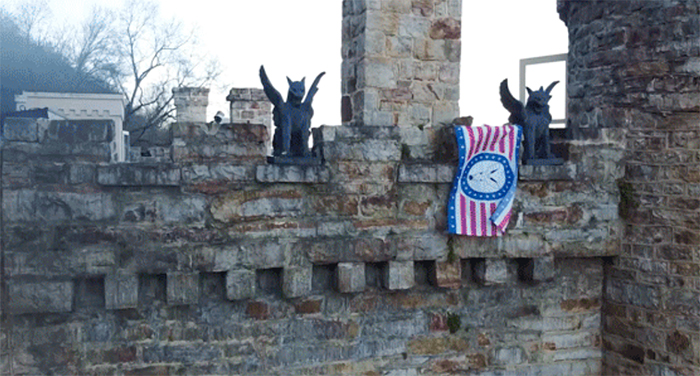 VDARE's flag hangs from the battlements of the castle the organization purchased in Berkeley Springs, West Virginia.

Bell, who is among the people who contacted Hatewatch independently of the March 12 meeting, described the castle as a staple of Berkeley Springs life, going back to her childhood, when she used to visit family there. In years past, Christmas decorations would be hung from the castle’s battlements. Shortly after purchasing the space, VDARE raised a flag emblazoned with their logo from those same battlements, something several members of the town told Hatewatch they found offensive.

'An organization with negative affiliations'

It’s understandable that a getaway destination like Berkeley Springs, which relies in no small part on tourists spending money on local businesses, would want to avoid associations with a hate group like VDARE. Founded by anti-immigration activist Peter Brimelow in 1999, the non-profit has grown in influence during the Trump-era while simultaneously espousing more extreme, racist viewpoints. VDARE appeared to defend the manifesto published by the alleged terrorist who murdered 22 people in an El Paso, Texas, Walmart in August, for example, calling the author’s use of the word “invasion” to describe Latin-American immigration “apt.” The group also advocated for whites seceding from the union in a YouTube video, and attempted to explain away the spread of COVID-19 by using speculative race science in a post on their website. VDARE published both of the latter two comments in March 2020, well after the Berkeley Springs castle was secured.

VDARE prefers to call itself “civic nationalist,” but the Southern Poverty Law Center has listed the group as white nationalist since 2003, citing the harsh drumbeat of racist rhetoric published on its website, and its periodic flirtation with antisemitic conspiracy theories. Kevin DeAnna, a white nationalist author who has penned more than 1,000 posts for VDARE’s website under the pseudonym “James Kirkpatrick,” splits time as a staff writer for American Renaissance, a white supremacist website that traffics in false and dehumanizing pseudoscience focused on race and IQ. VDARE advertises for American Renaissance’s yearly conference on its homepage these days, an event which has previously featured attendees like David Duke and “alt-right” figurehead Richard Spencer. By almost any measure, connections like this help to make VDARE a leading voice in the cause of organized racism throughout the U.S.

VDARE described their purchase of the castle in vague terms on their website, referring to it as a “meeting place.” VDARE has struggled to stage conferences in recent years due to public opposition to their agenda, and would likely benefit from owning a facility in which to hold large scale events. After the Cheyenne Mountain Resort in Colorado Springs, Colorado declined to host VDARE’s 2018 conference, for example, the group filed a lawsuit against the city’s mayor. The residence in Berkeley Springs could theoretically help VDARE avoid such headaches.

The castle also offers VDARE increased accessibility to Washington, D.C., from their current habitat in Connecticut, positioning them in a place that takes under two hours to access from the nation’s capital by car and roughly an hour and a half by train. Trump adviser Stephen Miller cited VDARE in private emails to Breitbart News, demonstrating the site’s influence in a Washington, D.C.-beltway culture that has grown increasingly nativist and anti-immigrant during the rise of Donald Trump. The castle is also securely embedded on a hill and surrounded by iron gates, making it hard for antiracist demonstrators to access it should VDARE decide to host a conference there. Well-attended counterdemonstrations have had a deleterious impact on the racist right’s ability to organize in public in recent years, making secure locations appealing to white nationalists like those linked to VDARE.

In an email, Brimelow declined to provide details about how his organization intends to use the property. But he denied a community backlash. Brimelow wrote:

That’s funny, a LARGE group of residents (relative to the population of the town) spontaneously emailed to welcome us after local leftists stated [sic] ululating. Of course, besides being beautiful, Morgan County voted 74% for Trump and what we’ve long advocated on immigration is basically what Trump outlined in his August 15 2015 position paper. So patriotism may not be as shocking to them as it is to you. We look forward to being a vital part of the local economy and the business community in Berkeley Springs for years to come.

'A bad thing for us'

Residents of the town noted one other potential detail that might make the castle appealing to VDARE: West Virginia’s demographics. The state is over 90% white, rendering it among the least diverse places in the U.S. to live. The area around Berkeley Springs follows a similar pattern to the rest of the state. Several residents who spoke to Hatewatch expressed concerns that the presence of a white nationalist group in town would reinforce negative stereotypes outsiders have about West Virginia, potentially driving away youthful energy and tourist dollars.

That was also the assessment of Allison Peck, the Director of the Immigration Law Clinic at the University of West Virginia, who spoke to Hatewatch by phone. Peck noted that West Virginia has an aging population, and that younger people are declining to settle there. Young adults are frequently leaving West Virginia for states with larger cities, taking their energy and ability to stir economic growth with them when they do, Peck noted.

“One way for West Virginia to attract more young people to the state would be to attract immigrants and refugees,” Peck said, noting the Republican governor’s positive comments about refugee resettlement in December. “Attracting immigrants can be a way to stop the gap.”

Peck noted that she has worked on immigration law cases on behalf of West Virginia residents originating from places like India, China and the Philippines in recent years, and said the majority of them are documented foreign workers. In Berkeley Springs, Hatewatch spoke to people originating from Iran, Nepal and Latin America, representing subtle shifts in the demographics of that town over time.

“When I came here 20 years ago, people didn’t know what to think of us,” Leslie Robles told Hatewatch, referring to Latin-American immigrants. Robles immigrated to Berkeley Springs from Honduras. “Now it has changed, in a good way.”

Robles, who works at a Mexican restaurant in town, told Hatewatch that she is one of about 10 Latin American people living in Berkeley Springs. She described VDARE’s arrival as a disappointment, relative to the feeling of acceptance she has encountered over time.

“It just sounds like a bad thing for us,” Robles said.

Townspeople who spoke with Hatewatch described Berkeley Springs as being divided between those who wanted to speak out against VDARE and those who strategically preferred to ignore their presence. No one, the residents said, publicly supported their message. The meeting with Hatewatch at the Fairfax Coffee House included people from different political persuasions, including Matthew Hahn, a Republican candidate for West Virginia’s second Congressional district. The general distaste for VDARE and white nationalism makes it easier for those who oppose the group to go on offense against it, even if it’s still unclear how such a protest will manifest, residents said.

Toby Moore, who described himself to Hatewatch in a phone conversation as a federal employee, said that he was “horrified” when he learned about the castle purchase. Moore said he lives in Alexandria, Virginia but purchased his vacation home in Berkeley Springs because of its tranquility. He said he found local news reports of VDARE’s purchase distasteful, due to the degree to which he felt they sanitized their views. He set to work on creating a website to better inform his neighbors of what the group believes, and he hopes to launch it soon.

“If the town becomes identified with a white supremacist group, it complicates my desire to live here,” Moore said, adding that the negative situation “could be good” to bring the people of Berkeley Springs together.

Moore highlighted to Hatewatch that VDARE hosted the writings of Jason Kessler, the man who helped launch the “Unite the Right” rally in Charlottesville, Virginia, in Aug. 2017. At that doomed event, a man who marched with white nationalists murdered 32-year-old antiracist demonstrator Heather Heyer and injured many others by ramming his car into a crowd of people. Moore said he is concerned that events at the VDARE castle could bring that type of violent and disruptive energy to Berkeley Springs.

“There are a lot of people here who voted for Trump but also want nothing to do with white supremacy,” Moore told Hatewatch of VDARE.

VDARE is also seen as an affront to Berkeley Springs’ ongoing efforts to be more openly progressive, residents said. Nicole Bell, as well as Trey Johanson, told Hatewatch the town was planning to launch its first Pride parade, possibly as soon as this summer. Regina AaMacha, a singer-songwriter who operates a gastropub in town, told Hatewatch that her mother brought her and her brother from Birmingham, Alabama, to walk in Martin Luther King Jr.’s march on Washington D.C., half a century ago. She said that VDARE’s values were out-of-step with her own and with the town at large.

“I was raised to respect all humans as equal and that no one should be judged by the color of their skin, religious beliefs or sexual orientation,” AaMacha told Hatewatch in an email. “The people I know in Berkeley Springs welcome the diversity of all cultures and we work together as an inclusive, positive action community.”