Chuck Baldwin, who has served as the national chaplain of the antigovernment Oath Keepers since 2013, announced his resignation early Tuesday morning on Facebook.

Baldwin is an antigovernment Christian dominionist pastor whose tenure in the Patriot world predates his involvement with Oath Keepers. Baldwin gained national notoriety in 2010 when he moved his congregation from Florida to the Flathead Valley in Montana as part of his belief in a coming biblical conflict.

In April 2014 Baldwin delivered a fiery sermon to a gathering of antigovernment patriots and militiamen who joined Cliven Bundy and his family in an armed standoff against Bureau of Land Management agents. 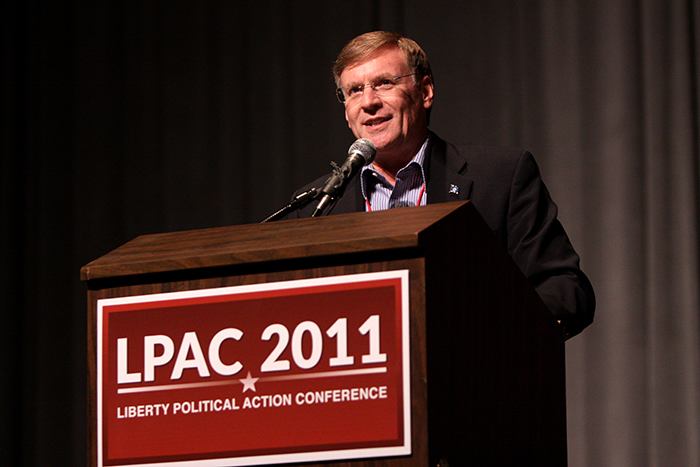 In a letter of resignation addressed to Stewart Rhodes, founder and president of Oath Keepers, Baldwin cited Rhodes’ “open letter to State governors regarding the Coronavirus” as the impetus behind his departure.

The letter in question, posted to the Oath Keepers’ website on March 11 and signed by Stewart Rhodes, encourages governors to “be proactive, rather than reactive,” and to implement a number of policies “to assist during this health emergency.” Rhodes founded Oath Keepers in 2009.

Baldwin wrote “not out of pleasure but of conviction” to explain his departure on April 3 and to disparage Rhodes’ recommendations as “an egregious violation of our Constitution and Bill of Rights.”

“By resorting to gross fearmongering and hyperbole, you have joined the mainstream media and Big Government medical hacks in attacking virtually every constitutionally protected liberty upon which our country was founded,” Baldwin continued.

His letter closed by musing on whether “the feds” had compromised Rhodes, whether Rhodes had “always been controlled opposition” or if Rhodes’ commitment to the “totalitarian nature of the ‘solutions’” in the open letter were sincere.

Rhodes’ recommendations stand in contrast with the beliefs of many in the Patriot community who have derided calls for social distancing and public closures saying they are overreactions at best – and at worst part of a shadowy plot to deprive Americans of their civil rights.

The divisiveness of the issue among the Patriot community can be seen on the Oath Keepers’ website, Twitter and Facebook platforms, which are littered with an array of articles dispensing advice on avoiding crowded public spaces and accusing social media companies and government officials of trying to suppress protests against stay-at-home orders.

A brief survey of the articles on Oath Keepers’ website indicates that Rhodes’ opinion might represent a minority among the nation’s largest organized antigovernment group.

The most recent articles posted include such titles as “Sheriff: I Won’t Assist in Destruction of Businesses or People’s Constitutional Rights,” “Mark Zuckerberg: Lockdown Protests Are ‘Misinformation,’ Facebook Will Ban Organizers” and “‘Out Of Shadows’ Lifts the Mask on the Mainstream Media and Hollywood.”

Nevertheless, Rhodes is not without his defenders among the Oath Keepers’ ranks. The group’s Texas state chaplain, “Chappy,” authored a post on the group’s main Facebook page expressing his disappointment with Baldwin:

Did anyone actually read the Letter to the Governors? The wording was carefully reviewed by a team of Oath Keepers, Nowhere in that letter, is anything Unconstitutional.