Protests against state-imposed stay-at-home orders have exploded across the country and attracted a wide array of right-wing supporters, including the Proud Boys.

The hate group appeared at a rally in Ohio on April 13. In the days that followed, their members attended demonstrations in Michigan, Colorado, Nevada and Florida. On April 20, in the midst of growing anti-Asian bigotry and conspiratorial accusations that the novel coronavirus was manufactured in a Chinese laboratory, members of the Vice City Proud Boys demonstrated outside of Miami City Hall with a banner that read “F--- the Chinese Government.”

This past Saturday, Proud Boys in Florida rallied outside the Miami Museum of Art and Design. Members in Portland also held a “flag wave” to protest Oregon’s social distancing measures. 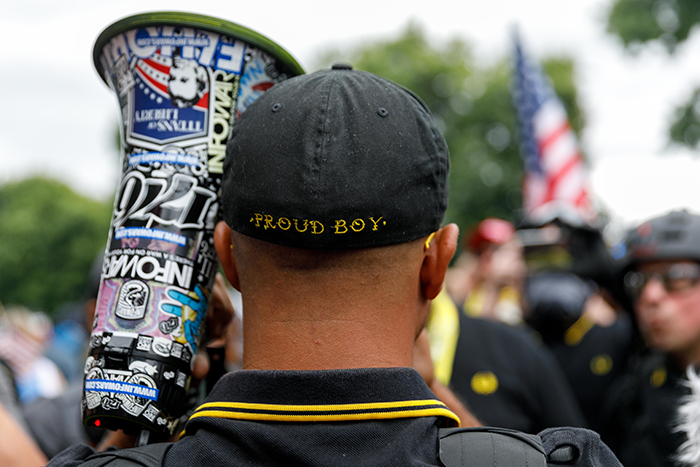 For nearly four years, the Proud Boys have used Trump rallies and street marches – frequently punctuated by premeditated outbursts of violence – to draw attention to their brand of far-right “Western chauvinism.” In the process, they have won the admiration of extremists and, in some cases, been embraced by more mainstream branches of the right wing.

One of the qualities that makes the Proud Boys particularly dangerous is the friendly relationship they have been able to cultivate with the GOP. “The Proud Boys’ lack of overtly racist symbols has given them a level of access to the Republican mainstream (as well as a free pass for militant street activism) that the Alt Right can only dream of,” Emily Gorcenski, a progressive activist who was present as a counterprotester at the Charlottesville “Unite the Right” rally, wrote for Political Research Associates.

Unlike the Proud Boys rallies of the past, members of the group are unlikely to find antifascists to brawl with in the streets at anti-lockdown protests. They are also not the main organizers behind the early demonstrations – that designation belongs primarily to wealthy right-wing activists. Those include the Dorr family, which draws in hundreds of thousands of dollars each year operating a number of pro-gun and anti-abortion groups, and the Michigan Freedom Fund, which is linked to the family of Education Secretary Betsy DeVos.

Even though the Proud Boys weren’t behind efforts to get the protests off the ground, they quickly realized their value. They are the perfect platform for the proto-fascist group to make the case that the will of a small minority of Americans – the hyper-individualistic “patriots” who attend these rallies – should supersede democratic processes, and that individual desires should trump the collective public good. The protests also provide other benefits: the chance to launch their ideas into wider right-wing circles, further cement their status as core members of the Trump coalition, build relationships with local politicians and gain attention from outlets like Fox News.

Fox News, which has in the past avoided addressing the Proud Boys’ appetite for violence, has been one of the largest cheerleaders behind the demonstrations. (Tucker Carlson once posed for a photo with members of the Proud Boys, while Sean Hannity has hosted Proud Boys founder Gavin McInnes on his show more than 20 times.) The media conglomerate promoted the “Michiganders against excessive quarantine” Facebook page and its Lansing rally the day before protesters hit the street. The page gained roughly 80,000 new followers in the day after Fox published their story. During her show, Fox News host Jeanine Pirro told one organizer on air, “A lot of people are very proud of you.” During another segment, the network displayed an image showing viewers the locations of all upcoming rallies. The network notoriously holds sway with President Trump, who posted a tweet calling on his followers to “liberate” states run by Democratic governors only minutes after Fox aired a story on the protests. Trump later called the protesters “great people.”

Wealthy far-right donors and the right-wing media are helping to amplify what is, in reality, a small movement. (One poll shows only 10% of voters favor ending social distancing to stimulate the economy.) In the process, they are elevating some of the most extreme figures who operate within these circles. Proud Boys and others have recognized the opportunity being handed to them and, on top of attending large-scale anti-lockdown rallies organized on Facebook, are now launching protests of their own.

On April 19, the Proud Boys announced a plan called “Operation: Reopen Florida”, which included a series of rallies around the state on April 25 to “stand for freedom & against the democrat driven unconstitutional lockdown.” The promotional poster for the event, posted on the group’s Telegram channel and the Facebook page of Proud Boy president Enrique Tarrio, directs you to the group’s online store. There, you can sign up for emails to hear more about their upcoming events and purchase clothing and other items that provide financial support for the Proud Boys.

If anything demonstrates just how politicized the debate over social distancing has become, it is how the Proud Boys chose to frame a widely circulated photo of nurses blocking cars of anti-lockdown protestors at an intersection in downtown Denver. “Antifa Healthcare Workers Clash with Anti-Lockdown Protesters in Colorado,” a headline on the website of a Florida Proud Boys chapter reads.

In the Proud Boys vernacular, labelling someone a member of Antifa – a loosely knit network of antifascist activists – is to label them the enemy. You could go and purchase a “DEATH TO ANTIFA” T-shirt at the Proud Boys online store, but they are currently sold out. “DEATH TO COMMIES” shirts, though, are still available.

The Proud Boys see antifascists, who their founder Gavin McInnes labeled the “paramilitary wing” of the Democratic Party, as representatives of the left writ large. Their long-running demonization of the left has allowed them to justify their own acts of violence (most notably an October 2018 brawl in New York City that landed two members in prison) and to push the idea of an impending “boogaloo” – a meme referring to a coming civil war or, in some more extreme circles, a blatant reference to race war.

The Proud Boys were among the earliest far-right adopters of the boogaloo meme. After getting kicked off Facebook early last year, they returned to the platform under the page name “West is the Best II: Electric Boogaloo.” The meme has now been widely adopted within far-right and antigovernment circles. At an anti-lockdown protest in New Hampshire, men toting rifles and dressed in tactical gear handed out “Liberty or Boogaloo” flyers.

The notion that the pandemic could accelerate the country’s descent into a civil war has gained currency on the right, evidenced by the growth of groups with names like “Boogaloo Enthusiasts: CORONAPOCALYPSE” on Facebook. “Did Trump just call for boogaloo?” one of the group’s members wrote after the president called on his followers to “LIBERATE VIRGINIA” on Twitter. “Well, you heard the man! Let’s go bois,” another responded.

The Proud Boys are connected to the broader extreme right in other ways – namely, that they promote a hierarchical society in which some people are more deserving of inclusion in civil society than others. Women, they argue, are best suited for domestic labor and should be subservient to men. Trans people, they’ve written on their Telegram channel, are “mentally ill gays.”

They malign Muslims in particularly ugly ways. While not using the term, the groups has made nods to the “great replacement” theory – the central animating idea of the white nationalist movement, which posits that white people around the Western world are being systematically replaced by non-white immigrants and Muslims in particular. In the Proud Boys Telegram chat (which has since been deleted), a Proud Boy in Minnesota posted that “The DFL [Democratic Farmer Labor Party] began importing Mexicans in 1965,” and by the 1990s, he wrote, there was a “Somali and Islamic invasion. Almost 60 years of chain migration and breeding, to the point that criminals, communists, socialists, and jihadists are up to and in our state’s highest offices.”

Elsewhere in the chat, he referred to Somali immigrants as “Animals. Just Animals walking around on two feet.” One of the group administrators expressed sympathy for Europeans who had to contend with “f------ sand people” from “the shit holey part of the world.”

At least two members of the Proud Boys are currently seeking political office. Enrique Tarrio, the president of the Proud Boys who in 2017 attended the “Unite the Right” rally in Charlottesville, Virginia, is running for U.S. Congress in Florida. Nick Ochs, a Hawaii Proud Boy, announced on April 18 that he is running for State Representative. “This isn’t a novelty campaign from an internet person,” he said on Telegram. “I’ve been active in local politics for years and this is winnable.”

A Proud Boy also currently serves on the Fennville, Michigan, city commission. Controversy broke out in another part of Michigan when members of the Proud Boys spoke before the Traverse City Board of Commissioners in favor of declaring the county a “Second Amendment sanctuary” – a trend that has animated the right across the country and inspired massive demonstrations.

On Telegram, the Proud Boys claim that although Michigan is the only state where a Proud Boy openly serves in a public office, “we have alot [sic] of PBs secretly serving all over.”

The Proud Boys’ participation in anti-social-distancing rallies only serves to further cement their connection to the mainstream, as evidenced by the way Mike Detmer, a Republican Congressional candidate for Michigan’s 8th District, jumped to their defense after he was photographed with two of its members at the Lansing demonstration. Enrique Tarrio apparently reached out to Detmer after he received pushback for posing with the hate group, prompting Detmer to post a Facebook video describing the Proud Boys as a group fighting for “all the things that you value in your Constitution.” In an accompanying post, he listed and described all of the official Proud Boys tenets, including “Reinstating a Spirit of Western Chauvinism.”

The Proud Boys see the anti-lockdown rallies as part of a larger political project. In a post announcing the three “ReOpen Florida” rallies, Tarrio wrote, “This is where the battle for the 2020 election starts.”