“Boogaloo Boys” – individuals associated with an online community characterized by calls for civil strife and ownership of firearms and tactical gear – have advocated for an armed revolution online and at public rallies for months. On April 11, one self-proclaimed “Boogaloo Boy” allegedly used Facebook Live to show himself attempting to murder police.

According to a probable cause affidavit filed in Bowie County, Texas, Aaron Swenson, 37, was charged with making a terroristic threat against a peace officer, after Swenson “posted a Facebook Live video stating he was going to ambush and murder a Peace Officer.”

Swenson “had been sharing memes from boogaloo pages on Facebook” for some time prior to the incident, according to reporting by Buzzfeed. 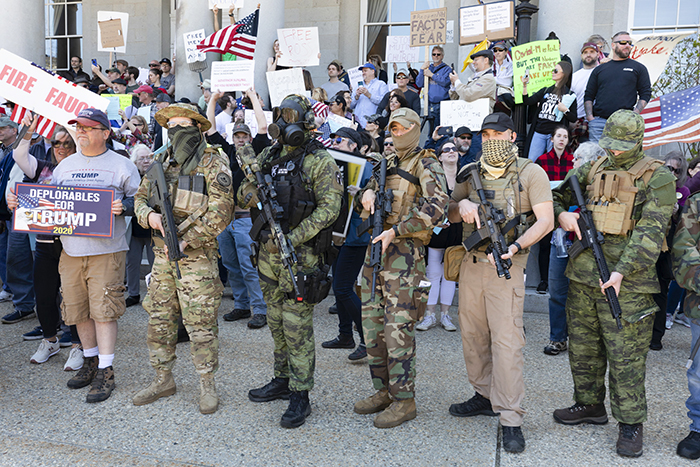 In this May 2 photo, people, including those with the boogaloo movement, demonstrate against business closures due to concern about COVID-19 at the State House in Concord, New Hampshire. (Photo via AP Images/Michael Dwyer)

The term “Boogaloo,” which began to predominate in far-right web spaces in early 2019, began as a shorthand for civil unrest following potential local or federal firearms confiscation, and has been embraced by antigovernment and white nationalist communities.

The “Boogaloo,” understood as a violent uprising against the federal government, bears similarities to other fantasies about potential eschatological violence popular in the antigovernment world, particularly “TEOTWAWKI” (the end of the world as we know it), “SHTF” (shit hits the fan) and “RAHOWA” (racial holy war), a trope common among white nationalists and paramilitary groups in the early 1990s.

On April 11 an anonymous tipster called in to warn police that a Facebook user named “Aaron Derpingston” was threatening cops on a livestream. Police viewed the livestream in real time. “Derpingston,” who police claim was revealed at the time of his arrest to be Swenson, drove around hunting for “red and blue lights.”

An officer viewing the stream identified Swenson’s vehicle based on a glimpse of his truck’s dashboard in the livestream. “Derpingston” announced that he had passed an access road at the same time that another officer on that access road spotted Swenson’s truck.

Swenson allegedly ran from police but was arrested after a police spike strip damaged his vehicle’s tires. In the police affidavit an arresting officer claims, “I could see Swenson holding his phone up [so] the people watching his Facebook Live video could see him during the pursuit.” 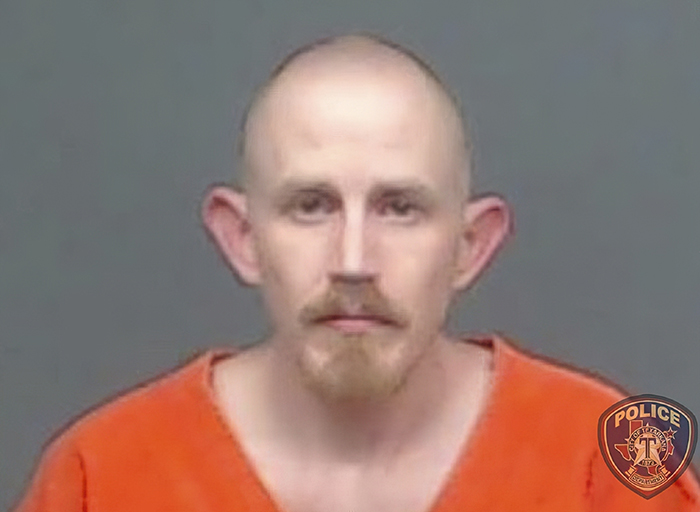 After refusing to exit his vehicle for 20 minutes Swenson surrendered and was arrested “wearing a ballistic vest with a handgun holster, rifle, and pistol magazines on the chest.”

According to a Texarkana police affidavit, this was not Swenson’s first time threatening law enforcement:

Officer’s [sic] received an email from the federal government in reference to this suspect a couple of months ago about him making threats towards law enforcement prior to tonight.

Swenson’s arrest comes in the midst of increased scrutiny on white supremacy and far-right extremism. In July, FBI Director Christopher Wray informed Congress that “a majority of the domestic terrorism cases that we’ve investigated are motivated by some version of what you might call white supremacist violence.”

Comments from “Arnold Derpingston’s” Facebook Live stream, which have been preserved online, show other members of the “Boogaloo” community warning “Derpingston” against committing violence and stating that “The boog community still needs you.”

This is not the time, if you are a part of the movement you must be PART of it that doesn’t mean to be some straggler lashing out needlessly, and there is no call for doing anything like this…

Several users disavowed “Derpingston” in the comments, telling him “You are not one of us anymore.”

Others invoked the name “Duncan Lemp,” a Maryland man who was killed by police executing an arrest warrant last month. Far-right groups have speculated that Lemp was murdered by authorities for his role in the “Boogaloo” community and his antigovernment beliefs and have begun to valorize him as a sort of "Boogaloo" martyr.

Lemp’s death has galvanized the creation of "Boogaloo" Facebook groups and spawned a demonstration at a Montgomery County, Maryland police station to protest “the unjust murder of Duncan Lemp and the abolishment of unconstitutional Red flag Laws.”

Tech Transparency Report’s survey of "Boogaloo" content on Facebook found that of 125 identifiable "Boogaloo groups," 60% were founded after COVID-19 lockdowns took place nationwide and that these groups have “attracted tens of thousands of members in the last 30 days.”

When reached for comment, a Facebook spokesperson said, “We updated our policies to prohibit the use of ["Boogaloo" and related] terms when accompanied by statements and images depicting armed violence.” The spokesperson said the policy was updated May 1, but said data about how many such posts have so far been removed is unavailable.