Louis “Lou” Sheldon, founder and former head of the Traditional Values Coalition (TVC), a once formidable anti-LGBTQ hate group and lobbying organization, died May 29 in Southern California. He was 85.

Sheldon’s death from an unspecified longstanding condition ends a decades-long legacy of anti-LGBTQ animus, and leaves behind an ongoing lawsuit he filed against his daughter, Andrea Lafferty, who had taken over as TVC president in 2011. He also leaves behind the seeming collapse of a once influential organization. Sheldon once had the ears of state and federal Republican lawmakers such as Newt Gingrich and the late California state representative William Dannemeyer, also an anti-LGBTQ crusader who demonized LGBTQ people throughout his career.

During its heyday, TVC maintained offices in Anaheim, California, and Washington, D.C. Sheldon worked closely with his daughter, who ran the D.C. office. Being in Washington allowed her access to lobbying on Capitol Hill. She began lobbying for TVC in 1991, but prior to that worked for former representative John Hiler, R-Ind. She later worked in the Ronald Reagan and George H.W. Bush administrations. She married James Lafferty, a former press secretary for Rep. Tom DeLay, R-Texas. Lafferty was named one of D.C.’s top lobbyists in 2004 by Washingtonian magazine, according to a May 2004 Washington Post article. Lafferty visited the White House 50 times between 2001 and 2008, according to Citizens for Responsibility and Ethics in Washington. 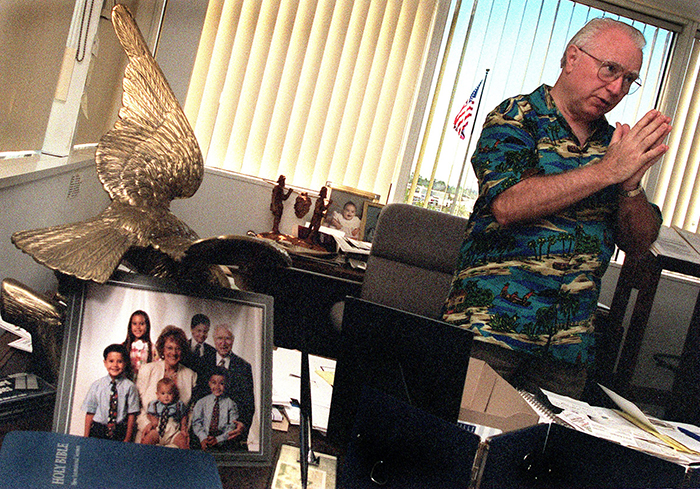 In this July 13, 1999, photo, Louis Sheldon, leader of the Anaheim-based Traditional Values Coalition, discusses his organization's purposes while being interviewed in his office in downtown Anaheim, California. (Photo via Bruce Chambers/The Orange County Register/SCNG via AP Images)

A protégé of Christian Right televangelist Pat Robertson, Sheldon, like his daughter, was also an influential lobbyist for the Christian Right during the 1970s and 1980s. He was born in Washington, D.C., in 1934 to a Jewish mother and non-religious father. He was ordained a Presbyterian minister in 1960 (later converting to Anglicanism).

He engaged with politics early, recalling in a 1989 Los Angeles Times article that his older sister took him to Thomas Dewey headquarters in 1944. Eight years later, he supported Dwight Eisenhower for president and after that, Barry Goldwater, thus establishing a pattern of supporting Republican lawmakers and policies.

Sheldon and his wife, Beverly, moved to California in 1969, where he worked in a Presbyterian church and started political work against LGBTQ people. In 1974, he battled a state law that removed criminal penalties for acts between consenting adults in private. When the law passed, he blamed it for “igniting the spark of a scenario of degeneracy,” according to the 1989 Los Angeles Times article.

The unsuccessful 1978 Briggs Initiative campaign to bar LGBTQ teachers from public schools was Sheldon’s first involvement with churches statewide to influence legislation. He served as executive director of California Defend Our Children, the organized support for then-state senator John Briggs’s initiative. Though the campaign failed, Sheldon saw it as a political watershed for further organizing.

He launched TVC as a tax-exempt 501(c)(4) organization in Anaheim in 1984 – one of many organizations founded in that era as part of the development and rise of the American New Right – to focus on California politics. He immediately began building the group into an influential Christian Right lobbying organization, with a particular emphasis on stopping LGBTQ equality.

TVC racked up early successes in the state, like pressuring California governor George Deukmejian in 1984 to veto a bill that would have forbidden anti-LGBTQ discrimination in employment. After the veto, Sheldon and his networks then bombarded state legislators with phone calls and letters to prevent the bill from getting out of committee the following year.

During the course of Sheldon’s tenure with TVC, he garnered a reputation for inflammatory anti-LGBTQ rhetoric, including his mid-1980s call for people with AIDS to be rounded up in order to protect the general population and his false claim stating, “As homosexuals continue to make inroads into public schools, more children will be molested and indoctrinated into the world of homosexuality.”

Sheldon and TVC were known for linking LGBTQ people to pedophilia and disease and pushing the myth of a “homosexual agenda” – a conspiracy theory that claims LGBTQ people are trying to corrupt American culture and destroy Christianity. TVC is responsible for the 1993 creation of an anti-LGBTQ propaganda film the circulated for years, called "Gay Rights/Special Rights: Inside the Homosexual Agenda," produced primarily for TVC’s use by Jeremiah Films, a Christian fundamentalist company based in Southern California. The film was part of the early push of the Christian Right to court black people to their anti-LGBTQ cause and to attempt to drive a wedge between LGBTQ people and black communities. The film did this by juxtaposing the “perverted” 1993 LGBTQ March on Washington with the 1963 Civil Rights March on Washington.

TVC claimed a network of 43,000 member churches beginning in the late 1990s. According to author and filmmaker Ioannis Mookas in the 1998 anthology Media, Culture, and the Religious Right, TVC also staffed state offices outside California and D.C., including Colorado and Nebraska.

However, TVC’s 990 tax forms tell a story of an organization that struggled with revenue for years, often ending up with net losses in the millions of dollars each year since at least 2004. (ProPublica has TVC’s 990s available for viewing from 2004-18.) The last known 990 filing was in 2018, where its net assets were a negative $4,484,393.

After taking over the TVC presidency in 2011, Andrea Lafferty seemingly struggled to keep the organization afloat in an era of increasing support for LGBTQ equality. The group added anti-Muslim sentiment to its rhetoric and eventually launched the “Task Force to Stop Shariah Law in America,” also in 2011. In 2015, Lafferty filed a lawsuit in Fairfax County, Virginia, to overturn protections for LGBTQ students in schools. The suit was dismissed by a Virginia court, and the dismissal was upheld by the Virginia Supreme Court in 2017. Since then, TVC has faded farther.

The group’s website disappeared in August 2017, and in 2018, its listed phone number was no longer working. Though SPLC first listed the group as an anti-LGBTQ hate group in 2008, it removed it in 2018, finding no evidence it was still active.

Lafferty and Sheldon then became embroiled in court disputes against each other. The civil lawsuit Sheldon filed in April 2019 against Lafferty, two other TVC officials, and the TVC board, alleges that the board members “have approved unreasonable compensation and nepotism among employees and consultants”; “blatantly refused to make payments on debt they have recognized is owed” and have “allowed TVC to engage in fraudulent direct mail schemes targeted to seniors to induce them to contribute to TVC front groups.” Sheldon further alleged that as a result of the actions and conduct of the board, “TVC is insolvent.”

Sheldon, who had once spent time working closely with his daughter, also alleged that under her leadership, “TVC no longer functions as a legitimate lobby organization” and instead “conducts fraudulent fundraising” to benefit Lafferty and her husband. The lawsuit may also have been a response to a 2017 lawsuit Lafferty filed against her parents and two others in 2017 for declaratory relief, seeking a court to declare TVC as the sole owner of a property in Washington, D.C., that Sheldon owned and was apparently trying to sell. Lafferty’s lawsuit, according to the 2019 lawsuit, was dismissed.

It’s unclear whether Sheldon’s lawsuit will go forward in the wake of his death. According to the Superior Court of Orange County, California, a trial is scheduled for January.

“My father was a key figure in Christian conservative activism,” Lafferty told the Santa Maria Times after Sheldon’s death. “During the 30 years I worked by his side, I saw daily examples of extraordinary faith and patriotism.”

“My family and I will miss him," she continued. “He was a great pastor to official Washington and all who knew him.”