On Saturday, Proud Boys from around the country plan to rally in Portland, a city the hate group has torn through repeatedly since 2017.

Update: Just after this story was published, news broke that Oregon Gov. Kate Brown declared a state of emergency in Portland for the rally. The move puts Oregon State Police and the Multnomah County Sheriff’s Office in charge of rally response, circumventing Portland's ban on tear gas.​

After waging a pitched political battle on the streets for years, their aims have become all too predictable: to provoke confrontations with counterprotesters, blame any resulting violence on the left, and press for further repression and retaliation against those they consider their political adversaries. While antifascists stand at the top of that list, journalists, Black Lives Matter activists, anti-capitalists and anyone organizing and protesting peacefully for economic and racial justice are included as well.

After months of nationwide protests and the looming possibility of a contested election, Americans are anxious about the road ahead. In a nationwide survey recently conducted by the Southern Poverty Law Center, 77% of respondents reported that they are concerned about civil unrest. Sixty-one percent said they feel the country is on the wrong track.

The greatest threat to the country comes from a fascistic right-wing political bloc that includes groups like the Proud Boys. They work symbiotically with right-wing media and a power structure – helmed by Trump – that is eager to clamp down on protesters and enact political revenge on progressive constituencies like Portland.

For the Proud Boys, the playbook hasn’t changed much over the past several years. But 2020 has presented new opportunities to exploit. Since protests kicked off months ago after a Minneapolis police officer knelt on George Floyd’s neck, suffocating him, the right has increasingly converged around the idea that armed citizens, militias and right-wing groups like the Proud Boys are needed to maintain “law and order” in American cities. The conditions for violence are high, and so are the chances that Trump and his supporters will, at the very least, condone any violence the Proud Boys perpetrate at Saturday’s rally.

Adding an additional layer of uncertainty, the Oregon State Police and Multnomah County Sheriff’s office both declined to offer the Portland Police Bureau (PPB) additional help on the ground during the demonstration, stating they would only consider offering assistance if Portland lifts its ban on the use of tear gas. PPB likewise cited overtaxed resources as the reason they chose not to intervene at a far-right rally last month where Proud Boys brandished guns and shot counterprotesters with paintballs. Considering the friendly relationship some PPB officers reportedly have with far-right groups, as well as the massive amount of resources they continue to deploy against Black Lives Matter protesters, it’s hard to imagine their decision isn’t politically motivated. At the very least, militias and other far-right groups see law enforcement’s actions – or inactions – as an invitation: to attack counterprotesters with at least the same ferocity the police have, and to do so with little fear of legal consequences.

The far right is fixated on violent vigilantism. At Bellingcat, Jason Wilson and Robert Evans recently excavated months of chat logs from the Proud Boys-allied group Patriot Coalition of Oregon. The consensus among group members was a belief that violence was the only measure that remained for dealing with their left-wing adversaries. “The only real way to end it is start shooting everyone [sic] of them. Fists and pepper spray are fun but don’t get the job done,” one member wrote. Another said that they needed to “be ready to defend with lethal response,” before suggesting that they wear masks to avoid being identified and potentially prosecuted.

Some awaited permission. “I’m waiting for the presidential go to start open firing,” one member wrote.

Portland has known lethal right-wing violence before. Jeremy Christian, a racist extremist who attended a Patriot Prayer rally, murdered two men on a MAX train in 2017 when they tried to stop him from attacking two Muslim girls.

While Trump has used his entire presidency to send approving signals to the far right (most notably his statement that there were “very fine people on both sides” at the 2017 “Unite the Right” rally) he has more recently made comments that they hear as a call to arms. “When the looting starts, the shooting starts,” he tweeted in May. The next month he threatened “protesters, anarchists, agitators, looters or lowlifes” that they would be treated aggressively outside a rally he held in Oklahoma. His designation of Portland, New York City and Seattle as “anarchist jurisdictions” sent the message that America’s cities need to come to heel via an authoritarian crackdown. What that might look like has already been demonstrated in Portland, where federal officers violently suppressed and surveilled peaceful and militant protesters alike this summer.

At the same time, right-wing media has aggressively defended vigilante violence in their coverage of Kyle Rittenhouse, an Illinois teenager and self-styled militia member who allegedly shot and killed two people and injured another at a Kenosha protest. In a Fox News segment, Tucker Carlson suggested Rittenhouse acted to “fill the vacuum” left by police. Commentator Pam Bondi called the scene in Kenosha a “war zone” and referred to Rittenhouse as a “little boy … trying to protect his community.” 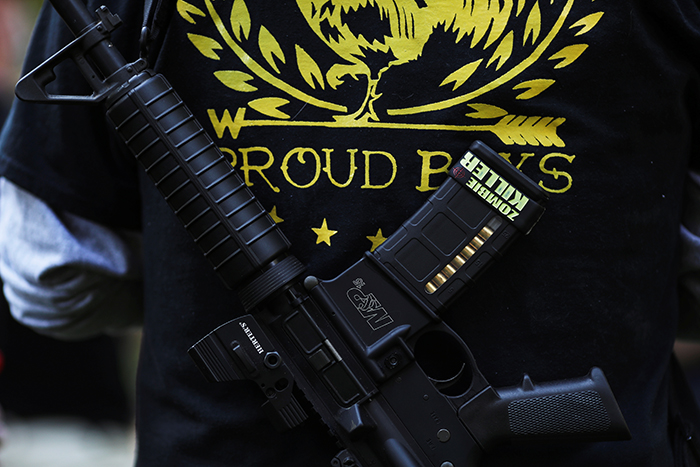 A Proud Boy carries a gun during a Sept. 5 gathering at a local park in Vancouver, Washington. (Photo via REUTERS/Caitlin Ochs)

For their part, the Proud Boys have called Rittenhouse a “hero” who “has more heart than most men.”

Other outlets have further stoked the fear of Black Lives Matter protesters and called for those who oppose them to take up arms. At the Daily Caller, one writer called for more people to join militias, saying they should “be allowed to grow as freely as the riots they oppose.” (“Riots,” it’s worth noting, that are overwhelmingly peaceful.) After protests broke out in Louisville in the wake of a grand jury’s failure to indict the police officers responsible for Breonna Taylor’s death, Revolver, an outlet that Trump recently promoted on Twitter, argued it was “time for the authorities to consider the unthinkable: deadly force.” Law enforcement has a “moral duty,” they wrote, to use deadly force against the “totalitarian left” that is attempting to “rip down civilization in the guise of seeking ‘justice.’”

The Proud Boys have been waiting years for these permissions. Before an August 2018 rally in Portland, one Proud Boy told his viewers on Facebook, “This is a true war and, you know, at some point — I hate to say this — someone’s gonna probably get injured pretty bad.” But, he continued, “maybe that’s what it’s gonna take to bring this to national attention, for maybe Trump to step in and say, ‘You know what? This is ridiculous.’”

Now it seems that they’ve finally gotten the response they were looking for.

What’s happening on the streets of Portland is a microcosm of a greater, boiling political conflict between a democratic, anti-racist bloc and one that is authoritarian and, in many cases, openly embraces white supremacy. How Trump, the police and the media respond to events in Portland this weekend will tell us a great deal about where the country is headed.