In pursuit of a more accurate and more just hate map, the Intelligence Project (IP) has committed to collapsing the Black Separatist listing. We will still monitor these groups, but we will be transferring them to hate ideologies, including antisemitism, that better describe the harm their rhetoric inflicts.

This decision comes after many internal and external conversations. A change in the way the map is structured will better capture the power dynamics endemic to white supremacy. Black separatist groups land on the SPLC’s hate map because they propagate antisemitic, anti-LGBTQ and male supremacist views, not because they oppose a white supremacist power structure.

It is important to acknowledge the moment we are in and the incredible efforts of groups such as the Movement for Black Lives and the power of protest, despite the militarization of our police departments nationally. The continued police violence directed against the Black community and lack of justice for their victims shows plainly the struggle for Black lives is not over.

SPLC, and IP more specifically, recognizes the common language shared by our Black Separatist listing and federal attempts to criminalize Black activism. We reject federal law enforcement’s false and misleading contention regarding threats from Black separatists. We believe this contention is used to justify the over-policing and surveillance of communities of color. Contributing to a false dichotomy does not serve SPLC’s mission of racial equity.

Why are we making the change?

The new listings will help address the demographic reality of the groups currently categorized as Black Separatist. In fact, these groups are not made up of only Black individuals. Furthermore, highlighting only these groups’ separatist intentions does not examine their overall impact on marginalized groups within and outside of the Black community.

These groups are very much part of activist spaces. While they should be exposed for their harmful rhetoric and held accountable within the activist spaces they inhabit, the SPLC does not believe criminalizing and over-policing is an acceptable solution. Unfortunately, the FBI has a “Black Identity Extremist” label for monitoring domestic terrorism. This label is unfounded, and is in itself a form of suppressing Black activism and organizing. In March 2018, former FBI agent Michael German gave testimony before the Congressional Black Caucus challenging the listing. German, who was at the time a Fellow at the Brennan Center for Justice at New York University, told the caucus, “What is most troubling about the [Black Identity Extremist] assessment is its potential to incite irrational police fear of black political activists. Irrational fear, unfortunately, too often in the past translated into unnecessary police violence against unarmed and unthreatening black men and women.”

IP hopes by dropping this listing we can lead by example and be able to contribute to a more accurate understanding of violent extremism, one that foregrounds white supremacist extremism as the most dangerous threat to national security.

The Black Separatist listing created a color line bias, separating hate and extremism by race and granting the appearance of a false equivalency of equal hate on both sides. But the hate is not equal. Black separatism was born out of valid anger against very real historical and systemic oppression. Black people in the U.S. have rarely experienced having a power structure that represents them. However, white nationalism has held historical, systemic and institutional power for hundreds of years in this country.

Even as white supremacist violence is named as a national threat, law enforcement instead disproportionately polices and surveils Black and indigenous activists, along with other activists of color.

Wanting separation from a society that has historically and systemically oppressed Black communities isn’t extremism. Black dissent isn’t black violence, and equivocating the two enables this over-policing of Black activism.

And while Black separatism is the connecting thread of these groups, it doesn’t illustrate the hate of their collective ideologies. Black separatism on its own does not necessarily meet our criteria for a hate listing, so placing these groups on our hate map next to a laundry list of violent white supremacist ideologies gives the appearance of an equivalency that does not exist.

SPLC was founded to fight against institutionalized racism. Part of that fight is doing the internal work of anti-racism. While these groups can be virulently anti-white, this prejudice does not represent the same threat as white supremacy in America. By making this distinction, IP is hoping to help dispel any misinterpretations of our understanding of how racism functions in American society. In our endeavor for racial justice and equity, it is imperative that we adopt an understanding of racism grounded in nuance and the realities of racial power dynamics. Racism in America is historical, systemic and structural.

Black separatist groups earn their place among our hate listings not for their calls for separation, but rather for how entrenched these groups are in antisemitic, anti-LGBTQ, misogynistic and xenophobic rhetoric.

We aim to expose these groups without helping the FBI in its definition of Black identity extremists, and this requires a change in how we talk about these groups. Going forward, groups formerly designated as Black Separatist will be characterized by antisemitism, anti-LGBTQ, male supremacy and whatever additional ideological categories most accurately describe their offending beliefs. While these groups are not as great a threat as white nationalist groups, they are still hateful, use divisive rhetoric and often have authoritarian leadership that encourages anti-LGBTQ, antisemitic and misogynistic beliefs. This has harmful effects on other marginalized groups, such as queer and trans people. 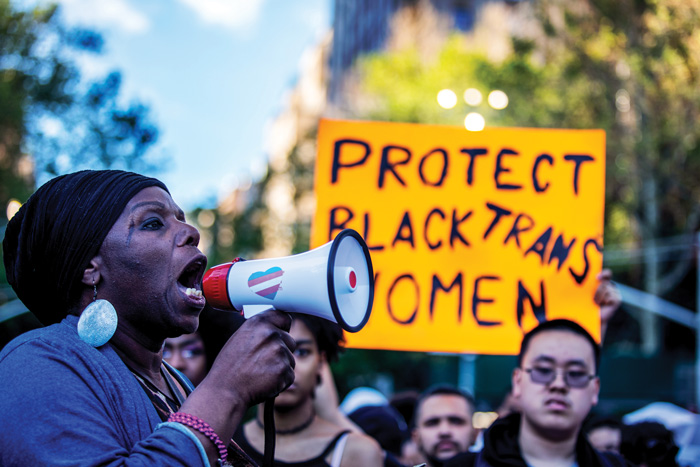 Violence against trans people disproportionately affects people of color. Many of the hate groups formerly categorized as Black Separatist espouse homophobic, transphobic and misogynistic views that further harm these communities.

So far this year, 30 trans and gender non-conforming individuals have been brutally murdered. Most of them were people of color. While their deaths are a product of both racism and transphobia, many Black separatist groups express homophobic and transphobic views. Black trans women are being murdered at astounding rates, and Black separatist groups, particularly those on our list, are contributing to a wider anti-trans narrative.

The harmful effects of antisemitic rhetoric from these formerly Black separatist groups is not as direct, but no less insidious or painfully ironic considering the historical partnership between Black and Jewish activists during the civil rights movement. IP has concluded that adding an antisemitism listing will help address this, as many of the groups under the former listing express extreme antisemitic beliefs.

The Nation of Islam leader Louis Farrakhan tweeted in late 2018: “I’m not an anti-Semite. I’m anti-Termite.” The Nation of Islam has also published a book called “The Secret Relationship Between Blacks and Jews,” which claims that Jews created slavery in America. This listing is overdue and will help to monitor this form of hate more specifically, focusing not only on Black separatism but also on other groups, such as Holocaust deniers, that perpetuate, traffic in and spread antisemitic propaganda.

As IP continues to carry on our work of exposing hate and extremism, we hope to do so in partnership and coalition with community organizers on the ground to help them expose and push hate out of their communities. We can rise to the occasion and demonstrate our commitment to adding a lens of anti-racism to our work. As we move forward in our mission of exposing hate in America, our commitment must be coupled with specificity and fairness. We are resolved to hold these groups accountable for their divisive rhetoric equitably and accurately.